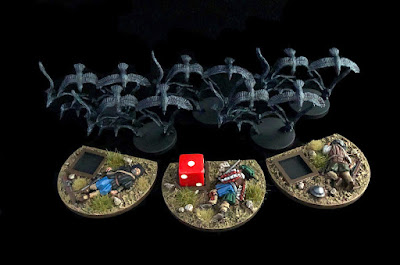 Just a small post from me to cap off the week.

A few Challenges ago PaulS posted some fabulous crows from Zombiecide and I knew I had to get a set for myself. I managed to pick up a box on sale this past summer and then duly forgot about them until a few days ago. (Don't you love finding cool stuff in storage that you almost bought again, but caught just in time? It's like an accidental Christmas.)

Anyway, as you can imagine these were pretty much a doodle to paint-up. I primed them black (I know, we're really pushing the boundaries here) and then oversprayed them a light grey. I then blasted them with a mixture of Drakenhof Nightshade wash and a bit of glaze. As they are light plastic, I glued in some small washers in the bases to give them a bit more stability. Squawk! Done.

What to do with these? Um, well, I thought they'd make great markers to denote when units are routing. You know, 'In flight'. In. Flight. Geddit? <Sigh.> Or maybe to highlight a spot on the table where something especially horrible has occurred. Like where Sylvain has dreamt-up some fabulously clever (read: suicidal) strategy, or where Peter has accidentally dropped/toppled/smashed some miniatures. Sometimes both of these happening at the same time. Sometimes repeatedly over the course of a game.

Come to think of it I may need some more crows... 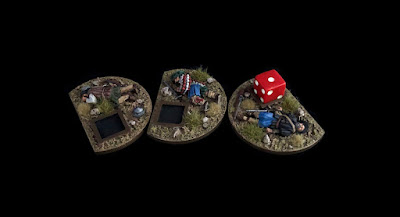 Next we have some casualty markers for my Italian Wars collection. I did a few of these last year and thankfully had a few unused bases waiting in the wings (thanks Byron!).  I believe the two flanking ones are from Eureka Miniatures' Colonial Portuguese range, while the center one is from Artizan. Poor chaps.

Hmm, so five bases of crows and the three casualty stands should give me 33 points.

Okay, brush hard and have a great week everyone!

The 'Water Feature' Theme Round is now UP! ...and Curt's Stricken Freighter

The 'Water Feature' theme round is now up in the gallery page, so please head over to take in all the entries.


This round was a little more thin on the ground with 33 participants, but I have to say that this did not diminish the quality of the work as there are some very cool entries to be enjoyed. Viewers will see a wide range of interpretations of the theme, from a desert oasis, and fortified island to a tramp steamer and water elementals. We're awash with all things splashy and wet.

After you've enjoyed in the gallery please take some time to vote for all your favourite entries. 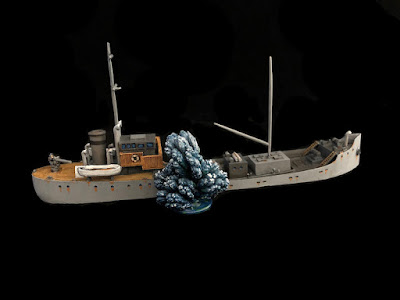 I admit I was a bit jammed for this submission as the week simply flashed by and I had absolutely nothing until last night. Nonetheless panic is often the mother of invention and I had a bit of inspiration while watching 'Das Boot'. So here I give you a poor stricken freighter, with a violent explosion amidships, soon to be adding to the tonnage tally for a U-Boat captain.

For the water spume effect I used the same 3D fractal model explosion that I used a few years ago for my exploding Star Wars ships. 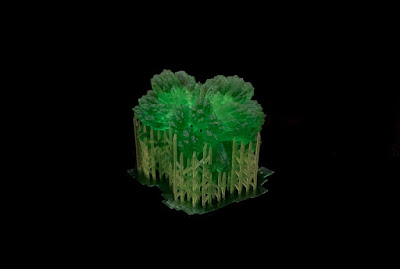 I sectioned the model into several pieces, switched them around, affixed four 'booms' to pennies to add a bit of weight and was off to the races.

The airbrush made fairly short work of them, with only a few layers of green and white added with the brush. Blamo-Presto: Water Explosions! 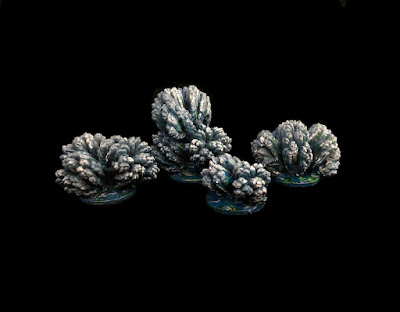 This mad bit of work also prompted me to finish my freighter that came with the Cruel Seas boxed set. Fairly stock work here, but I did drill out the stern deck to provide a magnetised mounting for a deck gun to be swapped in if a scenario required it. Sadly, the painting is a bit uninspired (I blame the rush) and it shows. Nonetheless, it's done and we have a juicy target for future torpedo/bomb runs. 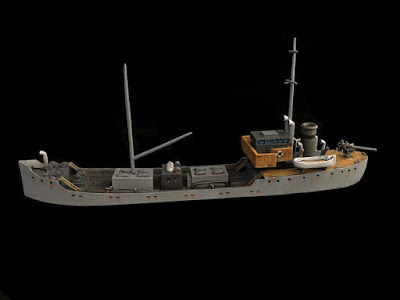 Okay, folks! Have a great time checking out the gallery and start thinking about what you want to do for our last theme round: 'Fellowship'.