I bought two styles of Legionnaire for this project. One group wear the dark blue greatcoat called a Capote and this batch just have their Fatigue or barrack whites. I plan on using these guys to defend the fort I completed last week, so it makes sense that they are not wearing their packs and coats. 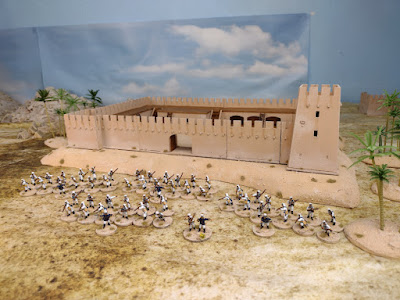 These Legionnaires wear their white Fatigue blouse and trousers with the blue sash under their belts. I always thought the sash looked terribly uncomfortable but it seems it offered good back support when carrying their heavy packs. Over the Sash is a belt with bullet pouches held up with a Y-Strap and vertical braces at the front (which was only moulded on some figures so I hand-painted them in any way). They also carry a canteen and musette bag as well as their rifle. 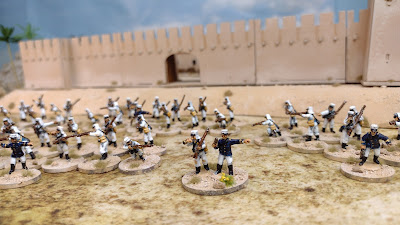 The white uniform was a real challenge to paint, but I got there in the end. I applied a thin black wash to fill the creases and then dry brushed pure white over the top. It actually looked a little grey still but that was ok, I had a plan! After I had done all the straps, belts, sash, pouches etc I reapplied the white as a highlight and in the process cleaned up a few mistakes and wobbly brushwork. The result is a white uniform that really ‘pings’. Of course, being slightly nuts I couldn’t leave it there so added dirty knees and elbows as a finishing touch. 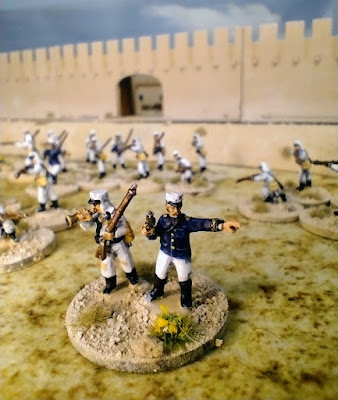 The officers have been given campaign dress, hence the white Kepi and white trousers rather than red. The Men Who Would be Kings rules mean that each unit comes with its own Officer but I decided I needed someone to command the whole group, so I used a spare bugler and based him with one of the Officer figure as a little vignette.

Points wise these are pretty straightforward. Four units of twelve men, plus an officer for each unit and a senior officer with a bugler on a separate base. That's 54 figures x 2 points each for 108 points.

So on last nights chat Ray says he "encouraged" you to buy this .and now its looking wonderful - he did suggest he could have some points for that ! Cracking job Lee - I am loving this . MORE please!!