From AlanD: The Next Project and Runes for Glorantha (125 points)

In the lead-up to the Challenge, PaulOG and I were talking about our 20,000 different projects, and I got all excited again about the English Civil War. This tends to happen every 8 months or so. In particular, I was inspired by the beautiful new figures from Bloody Miniatures, which are in my painting queue. First up though, I wanted to paint a Covenanter force to play Pikeman's Lament. I already had a few painted Covenanters, so I based them up and prepared the rest of the army for the Challenge.

This week I painted a unit of 12 pikes and a frame gun, all from Warlord Games. For the basing, I've decided to go with the 3-2-1 basing recommended by Michael Leck and Dan Mersey in the rules for Pikeman's Lament. I must say, I like this arrangement of basing a lot. It's quite flexible, and gives units a nice slightly ragged appearance. I had my usual existential crisis about what colour hodden grey should be, settling for the main part on a sort of medium sea grey with a bit of brown added in. 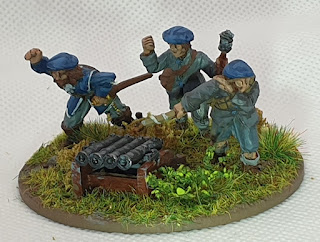 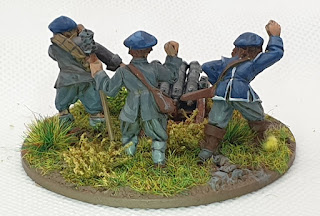 I was quite keen to explore Glorantha this week as well, and remembered I had a set of runestones from Fenris Games that I bought about 10 years ago. These are lovely accurate models of runestones from Sweden (from memory), and will be used for objective markers or just interesting table scatter in games like SAGA. 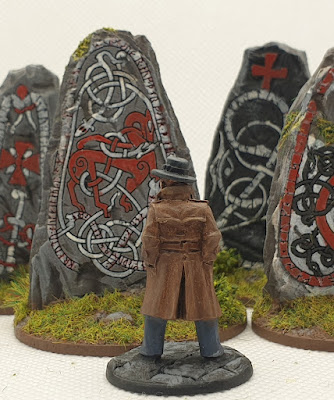 15 foot figures should give me 75 points, with another 10 for the frame gun. I don't really know how to score the runestones, except that they all fit in a 6 inch cube, so call it 20 points? Add a bonus 20 points for Glorantha, and I think this entry is worth 125 points. The Inspektor visiting from Weimar Berlin is just included for scale. 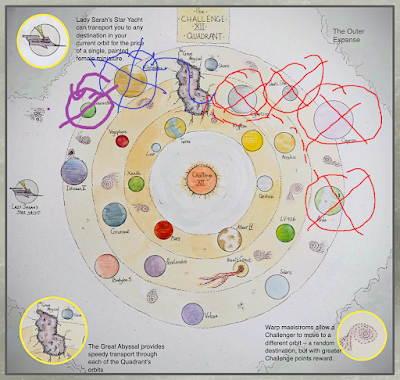 I really like that grey-blue tone you've achieved with your pikemen. I've never been quite game to adopt the 3-2-1 basing, even though I can see both the gaming practicalities and the aesthetic appeal. I do wonder how effective frame guns and early artillery was, but I'm sure there's a psychological shock. And the painted patterns really help the runestones pop.
Barks
Posted by Dux Homunculorum at 1:00 am