The Comedic Theme Round is now Up!

Okay, please feel free to head over to the Theme Page and enjoy the entries from this week's 'Comedic' round.

As you can imagine this round is meant to be a bit of fun, allowing us to get an inkling to many of the Challengers' sense of humour. As such you will be treated to entries like  Hokey Pokey Tribesmen, zombie slaying banana men and a nightmarish sequence of Rob Lowes (!). Some of the submissions are tongue-in-cheek, others are over-the-top maniacal and there are a few which are weirdly fantastic - It's quite entertaining.

So, please get a cup of your favourite beverage and settle in for a smile, a chortle and maybe even a belly laugh.

Finally, remember that once you've finished seeing all the entries please take the time to vote for all your favourites.


NOTE: Hey Folks. I had some issues with both Blogger and Survey Monkey and so I had to rebuild and reset the voting poll an hour after the theme's launch. If you were one of the early birds please return to the poll and recast your votes to make sure they have been captured.

Sorry about that but it couldn't be helped. 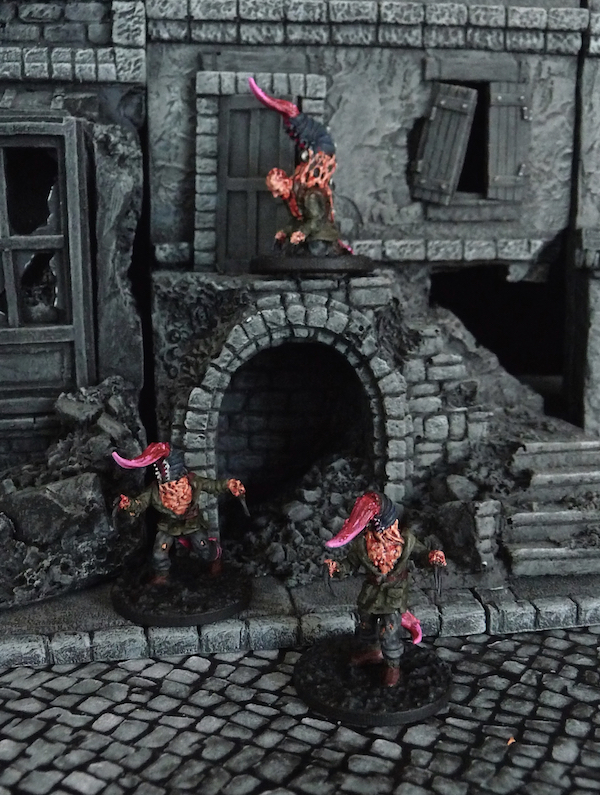 This entry takes me back for a bit of pulp adventure, this time it's a trio of figures from the game where the world of H.P. Lovecraft meets the Second World War: ‘Achtung! Cthulhu’.

Several weeks ago someone had mentioned that many of the Cthulhu miniatures currently available are not really horrific enough to convey the vision of the literature.  For the most part I tend to agree, but I think there are some exceptions, such as these creepy fellas below. 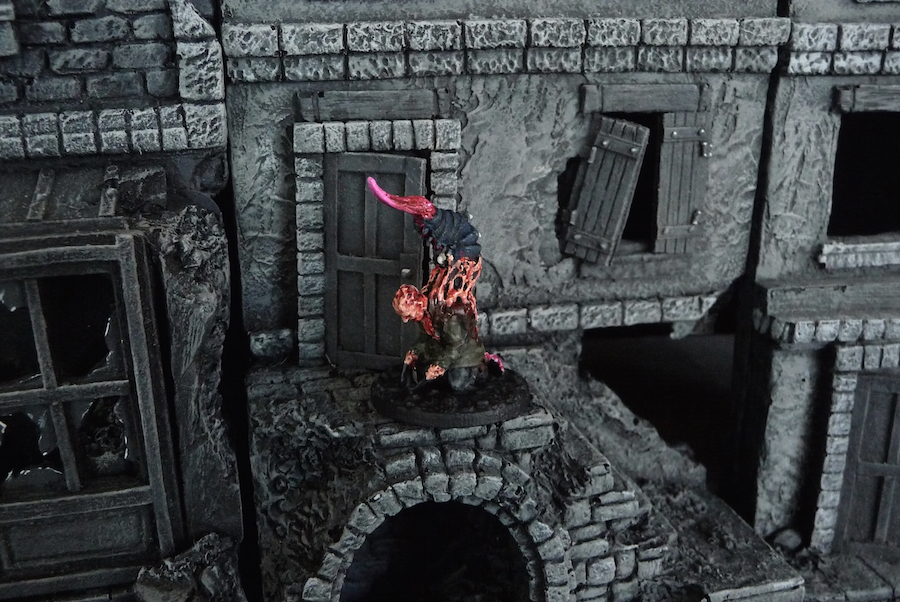 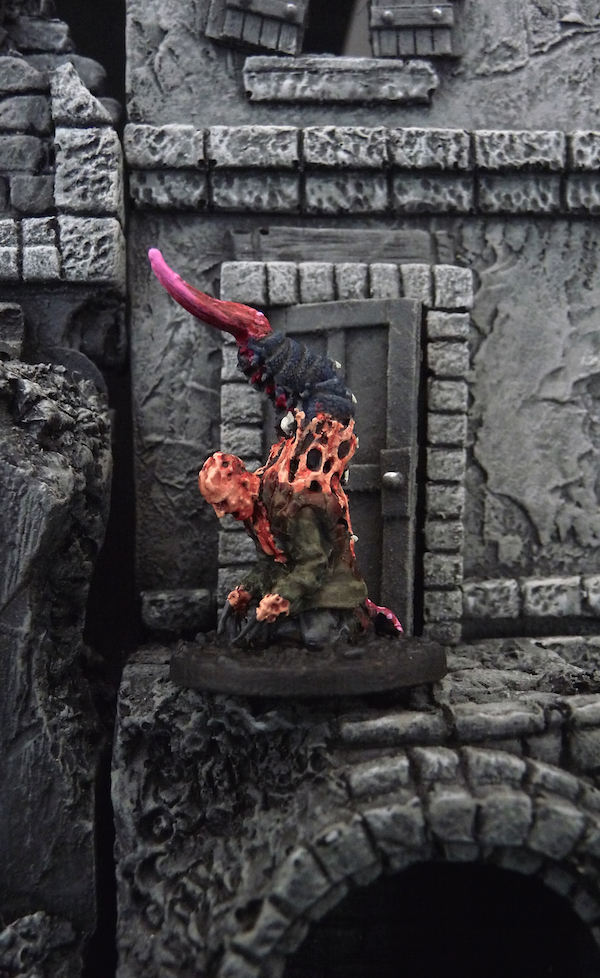 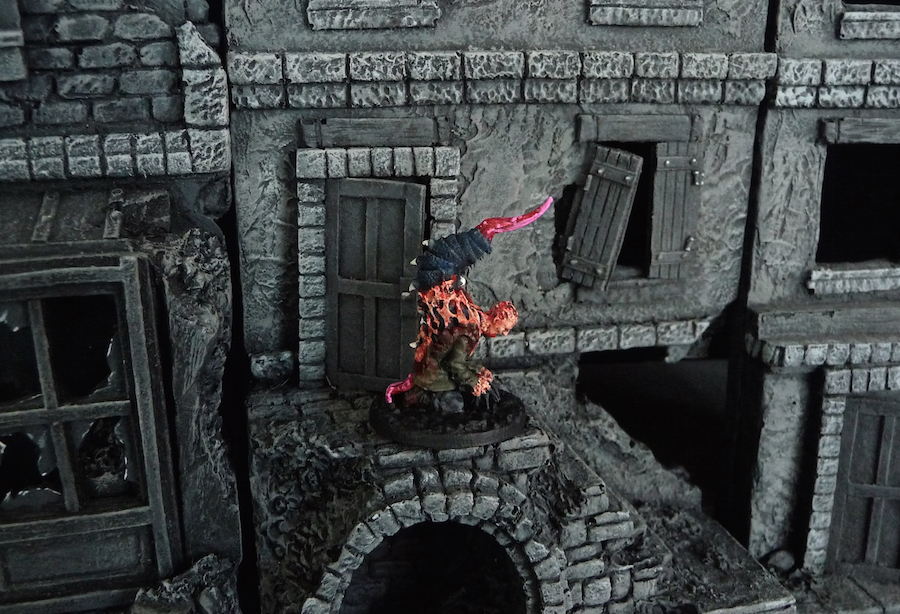 These rather disturbing creatures are known as Servitors of Nyarlathotep.  They’re beings that use a human host as both an incubator and delivery device.  Lurking until their dark designs are needed and then tearing themselves into our reality in order to wreak havoc.  Sort of like tax assessors with a skin condition. 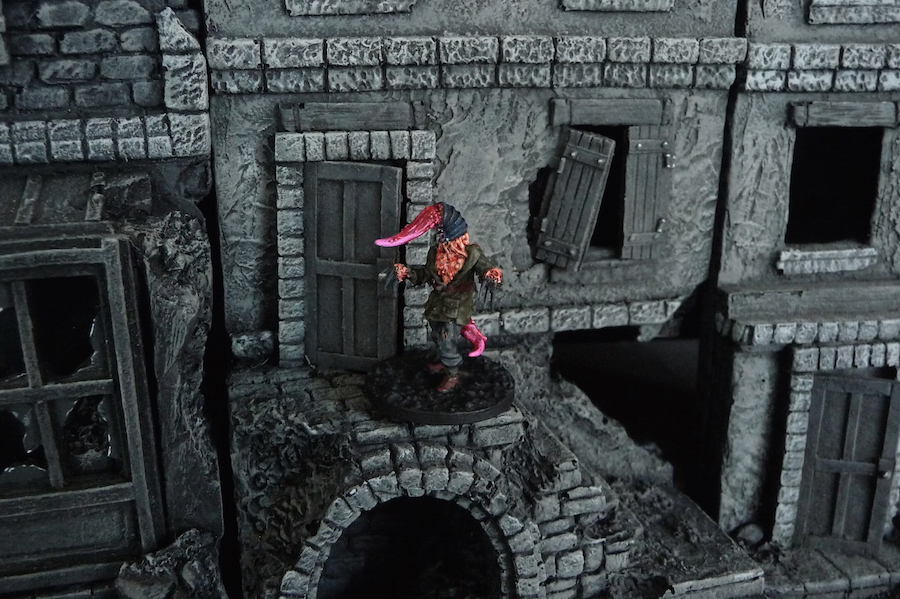 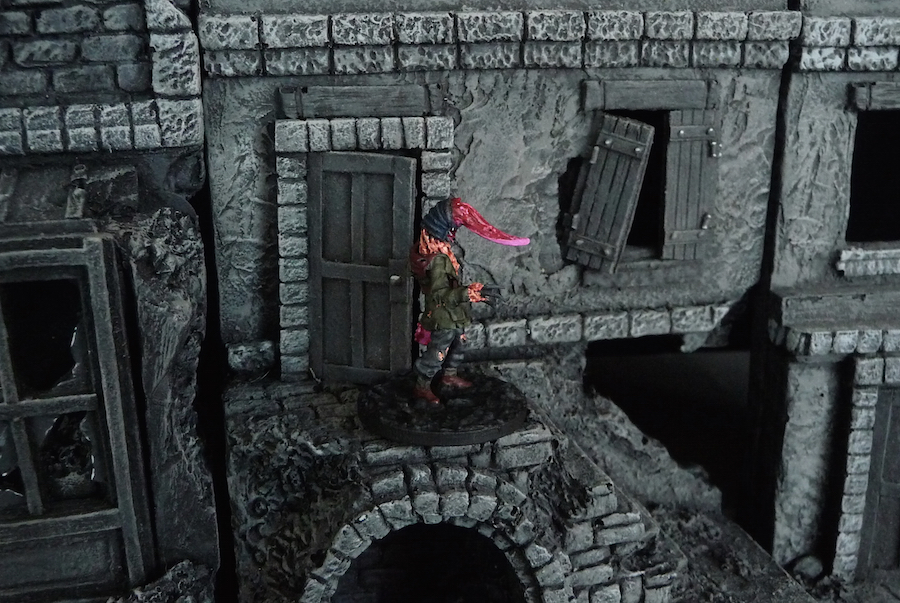 These are 28mm figures from Modiphius Entertainment’s ‘Achtung! Cthulhu’ range.  Nice figures, with very fine features and excellent detail.  They're perhaps a smidge smaller than most other 28mm WWII lines, but not markedly so. 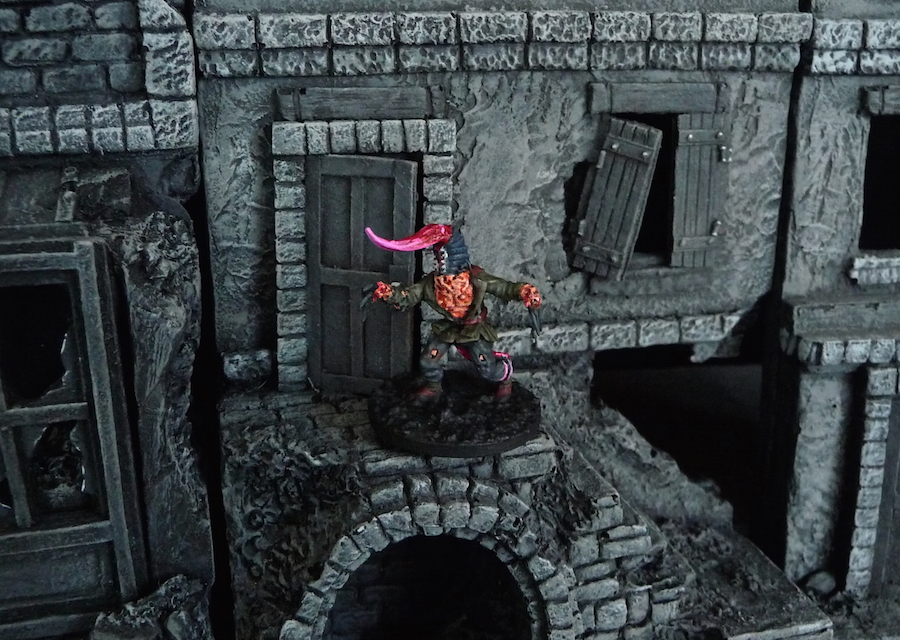 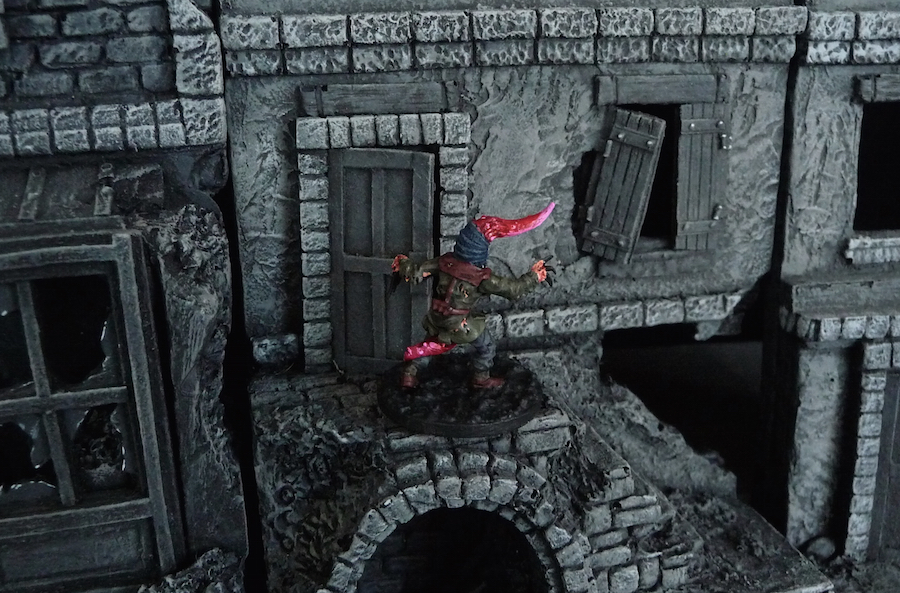 Many of the paint schemes I’ve seen online for these figures depict the emerging creatures' bodies in a single uniform colour.  As the figures' design reminded me of the art of H.R. Giger (famous for his conception of the first Alien movie) I chose to portray them as something almost quasi-sexual, with a nasty pink pseudopod emerging from a carapace.  Ewww, yeah, sorry about that. 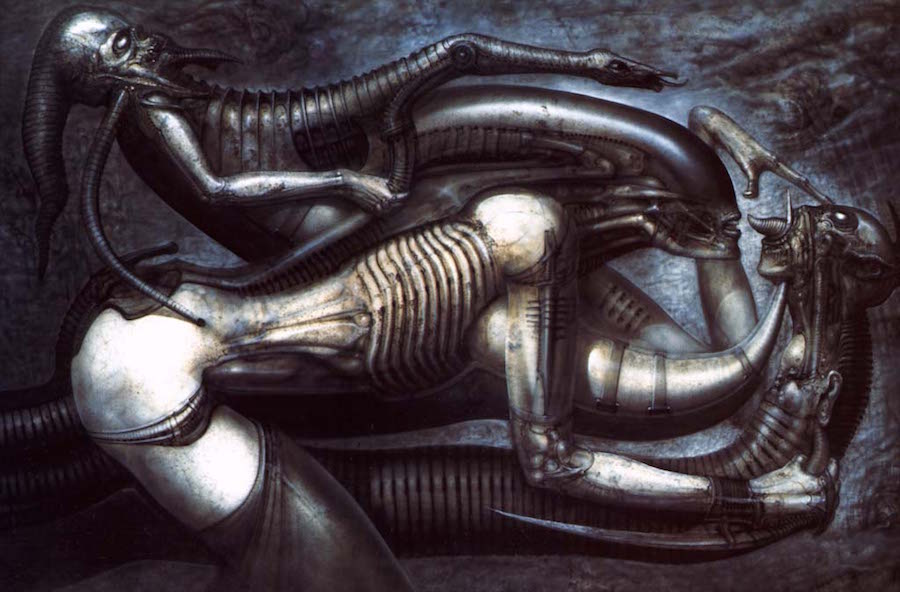 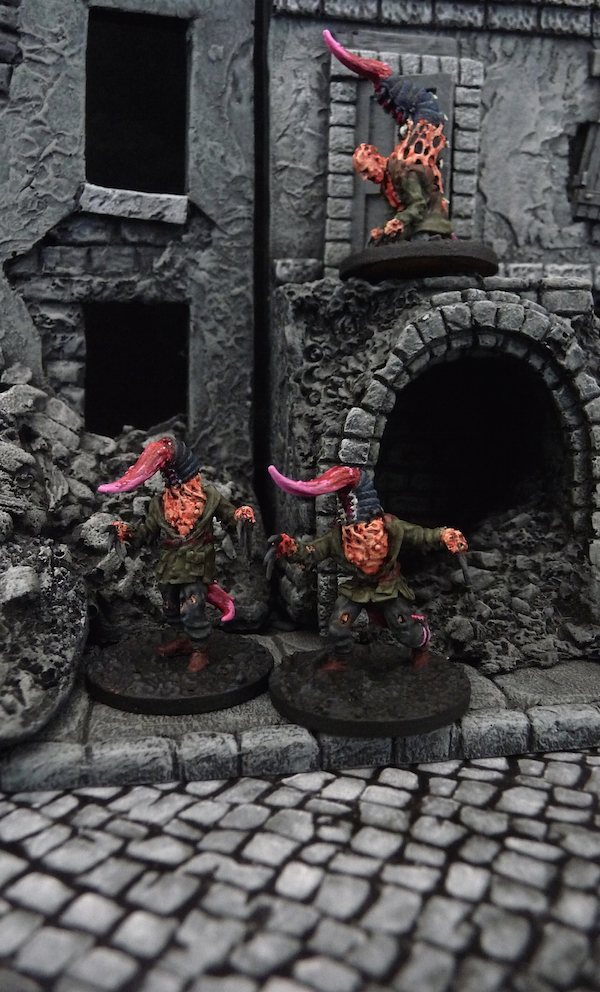 Okaaay, to help take your mind away from that disturbing image I’d like to point out to you the wonderful cobblestone mat that I've used in my photos. Yes, if you look closely you’ll see that the mat is in greyscale. Now, how neat is that! 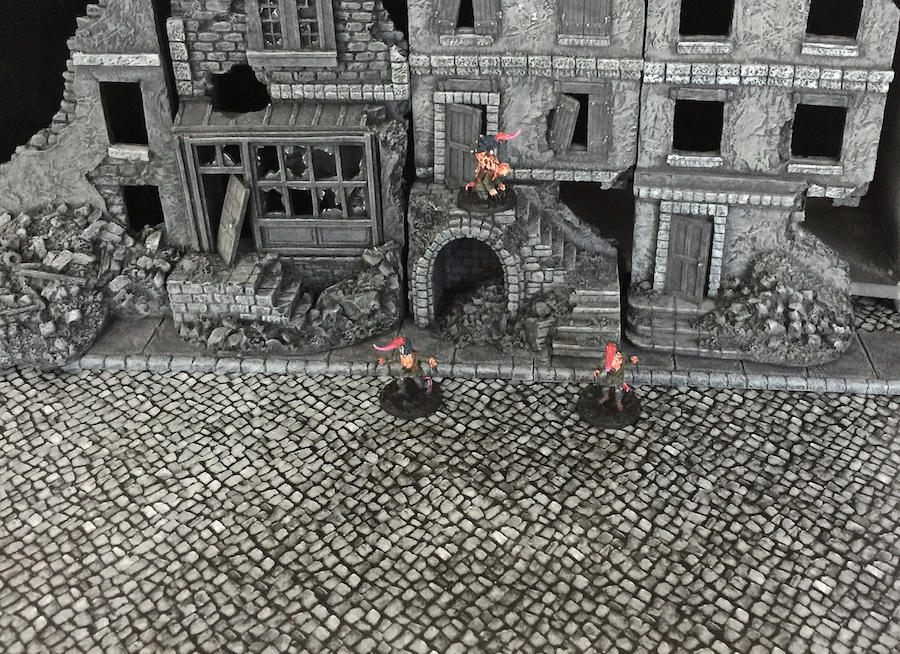 You see, when I approached the good people from Deep-Cut Studio about the possibility of them being a Challenge sponsor they recollected my Great War greyscale work and so offered to do up a PVC cobblestone mat in a similar motif.  Very flattered, I happily accepted and am extremely delighted with how it all turned out. 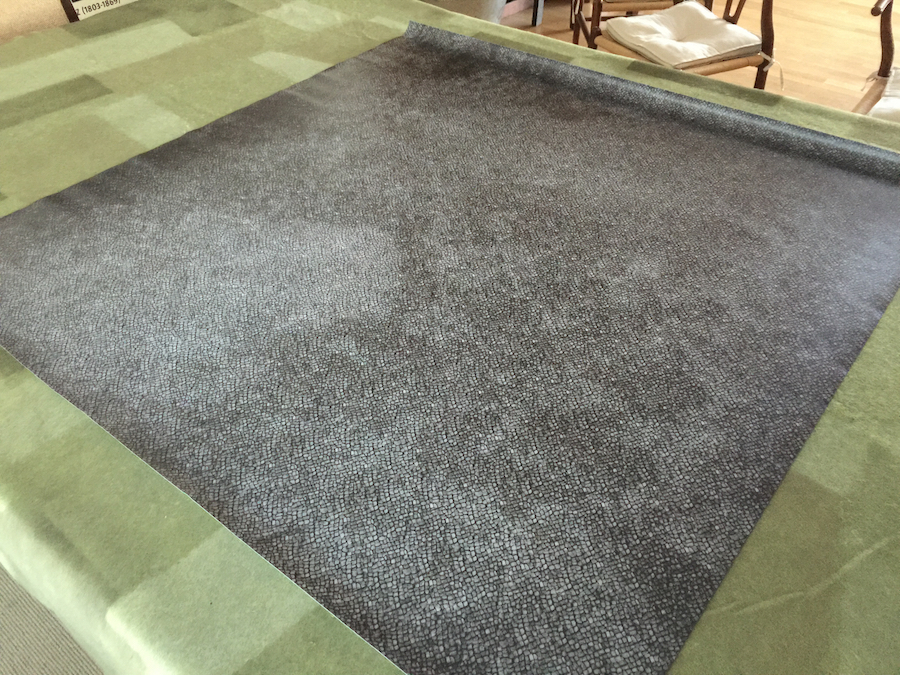 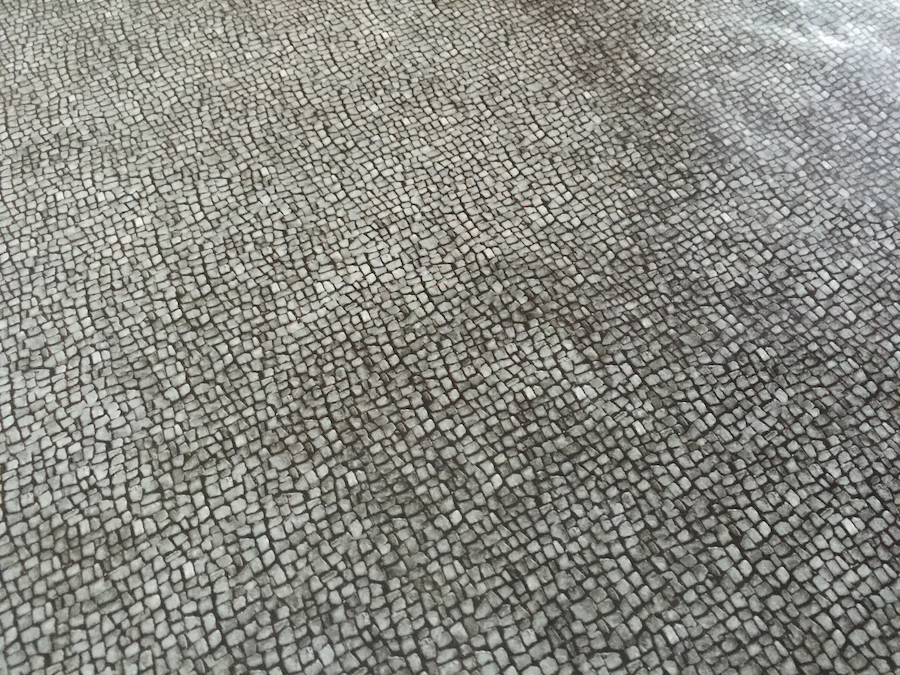 As you can see it works very well with my greyscale figures and building facades.  The original coloured mat has a few manhole covers as part of the design, but I did not want to have to work around them in laying out my buildings so I asked to have them removed.  No problem, the designers quickly made the necessary adjustments and I now have a wonderful 4x4 cobblestone layout for my Great War and Pulp gaming. Thank you very much Deep-Cut Studio - you did a brilliant job!

Tomorrow I'll be beavering away with the 'comedic' theme round so expect something on that front later in the day. But now, off to sleep!

Here's my so called Lurtzgeld. I have a feeling, that Curtz already has this same miniature in his collection (at least he has the wounded Boromir from the same boxed set), but I can't be sure. Anyhow, it seems to be one of the hot topics this year to paint something for Curt, that he is just starting to paint... 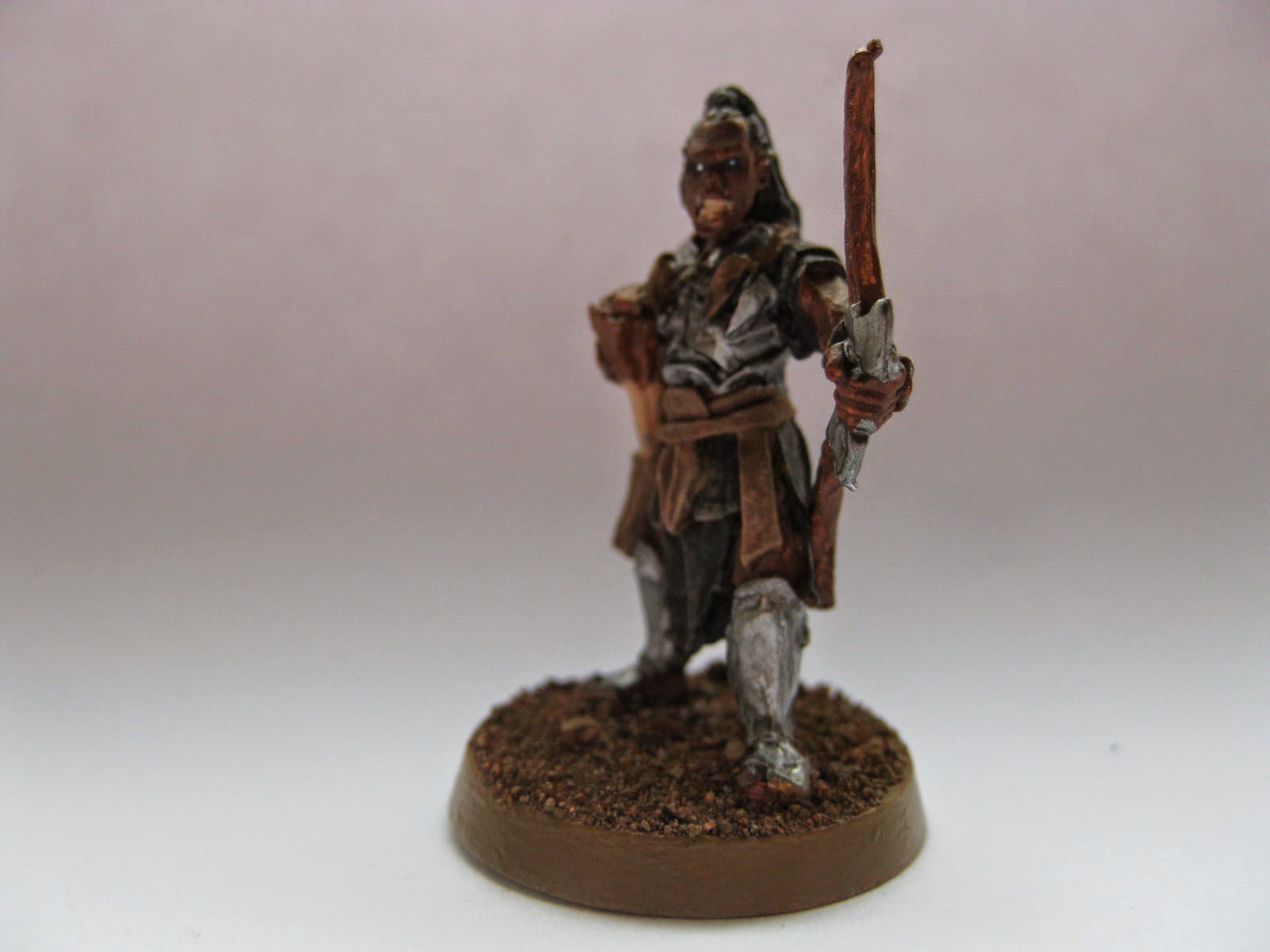 This Lurtz with bow comes from the Ambush at Amon Hen boxed set, which was released before the first movie came out, if I remember correctly. I didn't by the set then, I regretted it afterwards, but then late last year I was able to buy the set second hand. So I stripped of the paint and applied the paint of my own. I have painted Uruk-Hais in the past, so I had the color scheme ready. Of course the leader needs a little bit more special attention and details. Anyway, the recipe is limited amount of earthly colors, different browns, black and dark metal, lots of washes. Lurtz has a bit of worn look, he has been marching for days (and nights) and cleaning the equipment is not something I believe Uruk-Hais are interested in. 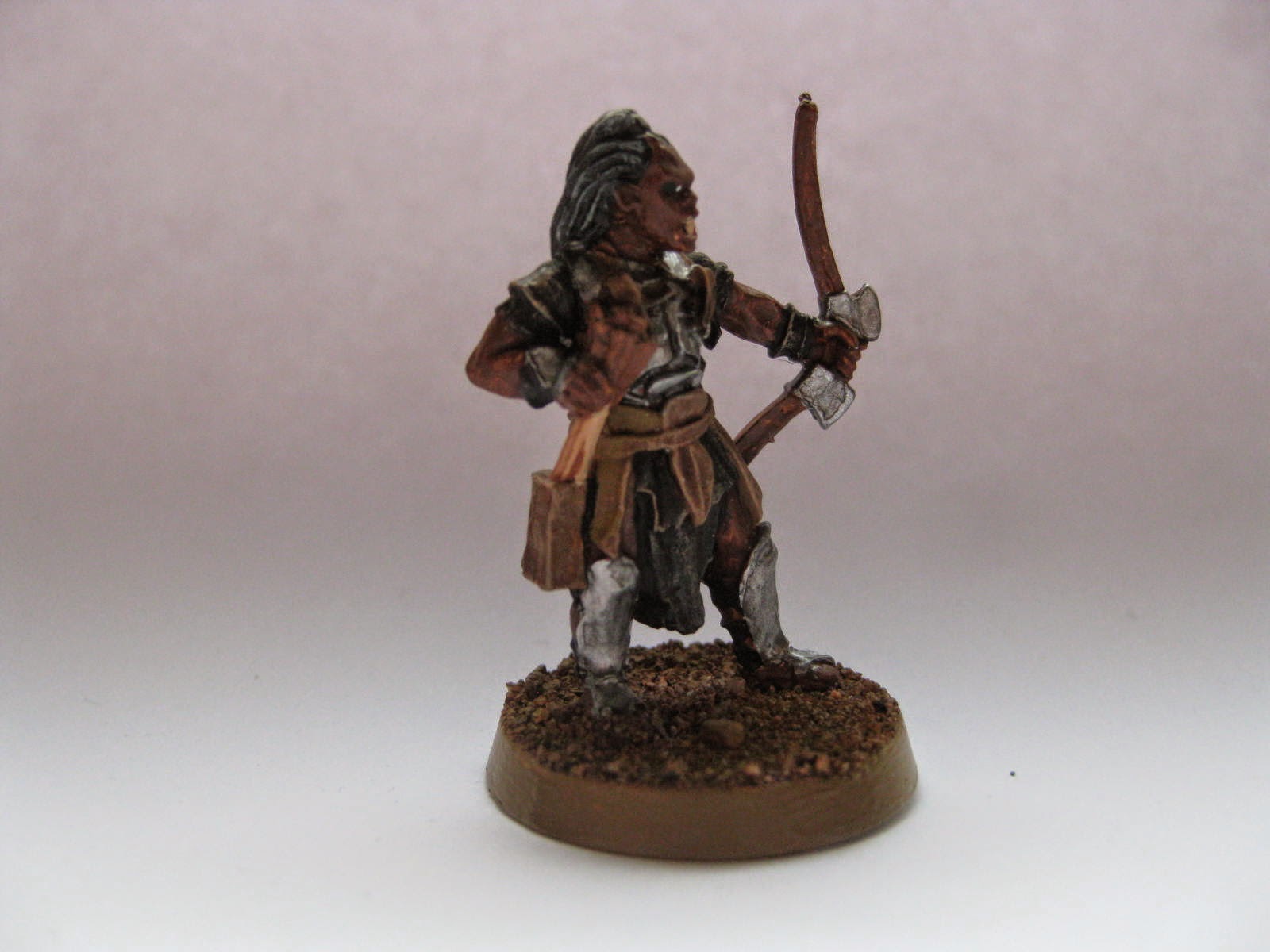 Lurtz is a villain, I don't think anyone can argue with that. A servant of Saruman on a mission to capture the ringbearer hobbit, almost accomplished his task and killed Boromir among other things. He is not a named character in the books, but something Peter Jackson & Co added to the movie. 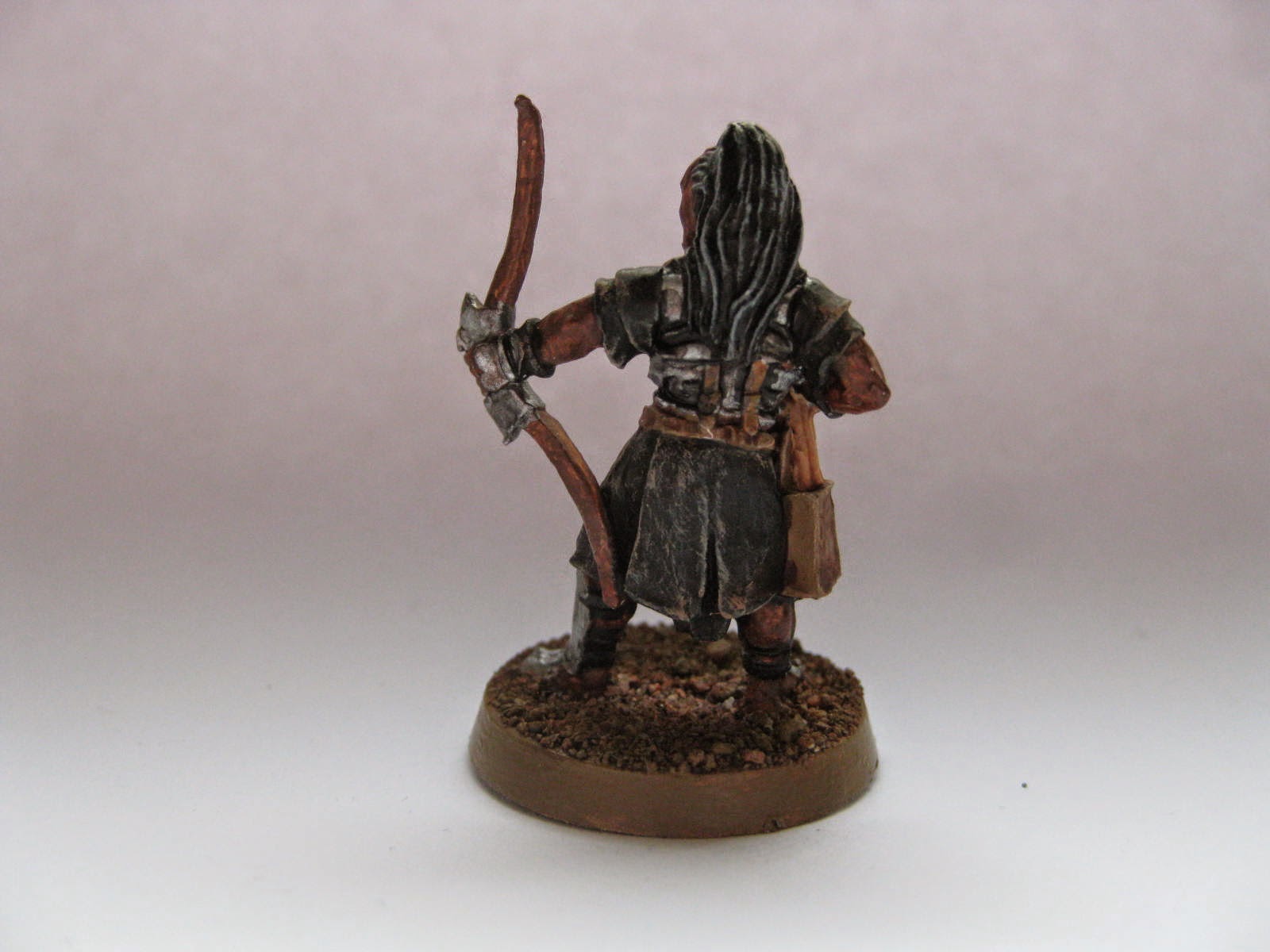 In the movie the Uruk-Hais have the White Hand of the Saruman hand-painted on their head or helmet. I have painted them on the helmets and occasionally on the shields as well, but Lurtz has neither. I did't want to mess his head with white paint, so I left it out. Does it mean he is in fact part of the ImagiNations? 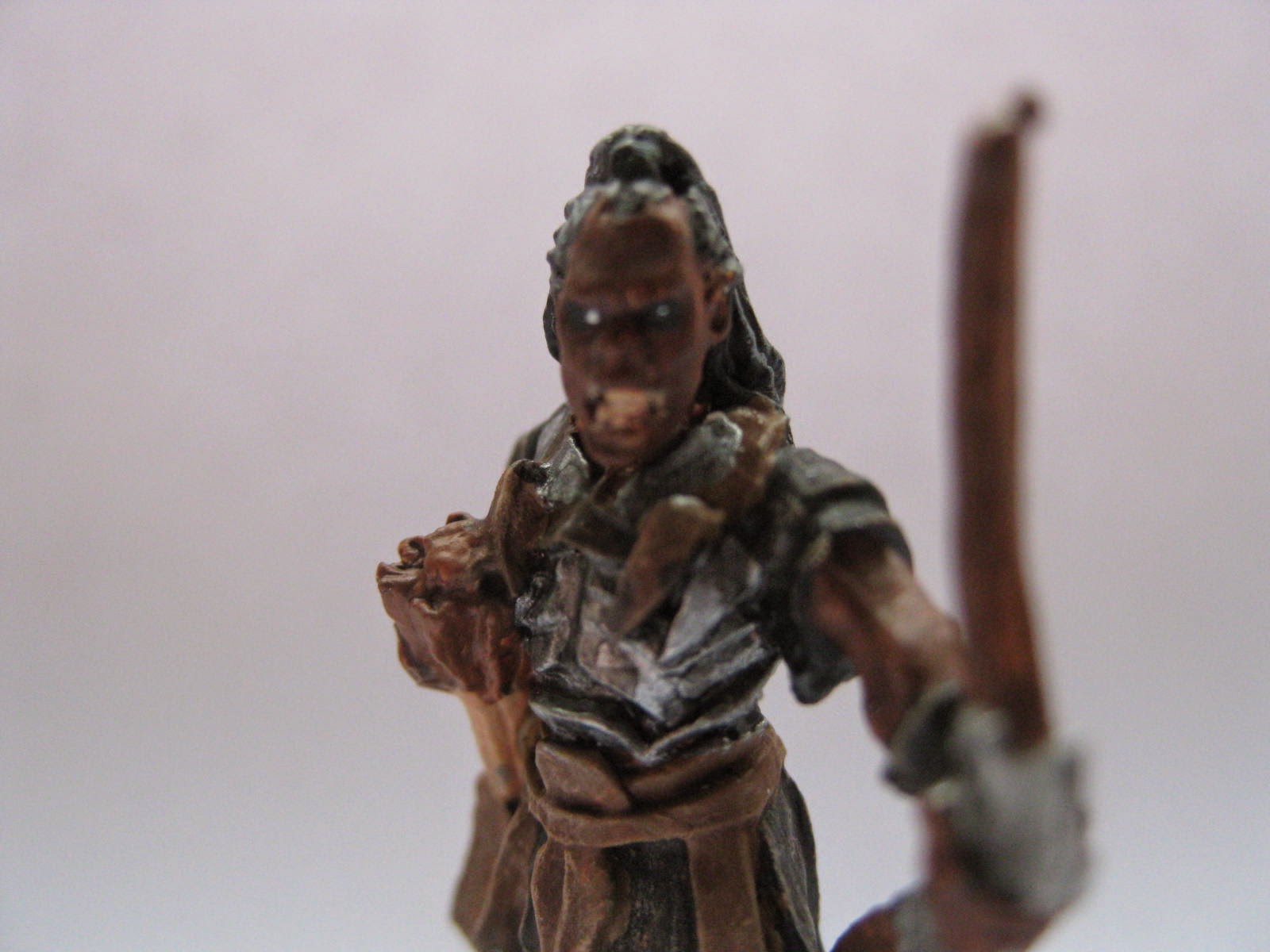 No white hand on the pretty face, just two evil eyes and a bunch of teeth.

This little fellow should give me 5 more points. With the Hot bonus round points and this I should have reached my initial target of 500 points, do you agree Lurt? Let's see if I can reach 700.

A wonderful miniature Teemu, thank you (I particularly like his creepy light eyes)!

I'm not sure if we can sell Lurtz as a classic antihero, especially to the Forces of Light, but perhaps to his Uruk-hai bretheren he might be considered an antihero as he slew Boromir, captured Merry and Pippin, but was shamefully bested by that nasty Ranger, Aragorn.

Thanks again Teemu, it's much appreciated!

Posted by Teemu Laaksonen at 1:20 am 9 comments