The 'L'amour' Theme Round is Now Online! 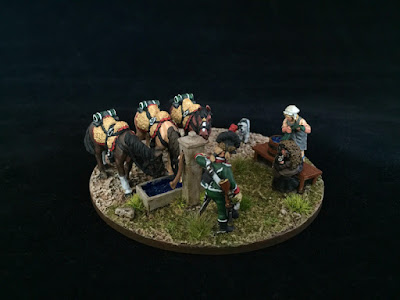 Sorry for the delay with posting the theme round, but Lady Sarah and I were enjoying a nice, lazy day off together.

To celebrate Valentines we have 'L'amour' as our bonus theme this week. I think you'll get a chuckle when you view the gallery as we have many great interpretations of the topic of 'Love'. I'll say no more, so you can enjoy without any spoilers.


As to myself, it was a tad rushed but I give you 'Prendre la Température / To Test the Waters' (I think). 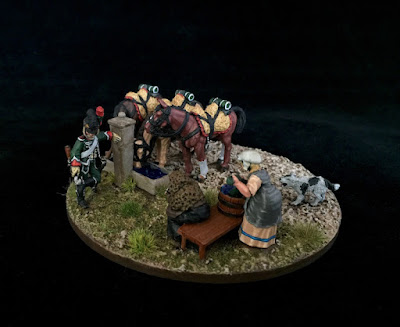 It's 1795, and we see a French Chasseur a Cheval watering some of his troop's horses in a small village. He is knocking out his pipe on his boot, admiring the local scenery. A fetching young lady, who is washing some of the regiment's laundry, has caught his eye and he thinks he might test the waters. 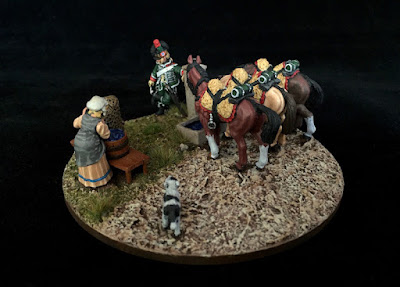 Nonetheless, the young miss has two chaperons nearby who are definitely wise to the scenario. One is an old crone, smoking a pipe and keeping an eye on the dashing cavalryman. In fact, she can clearly remember that warm spring day in 1745, when those handsome hussars came swaggering into town (where do you think she got the pipe?). She know's what's afoot... 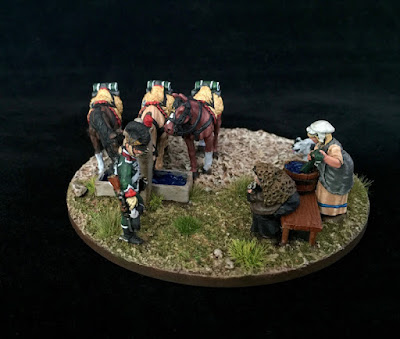 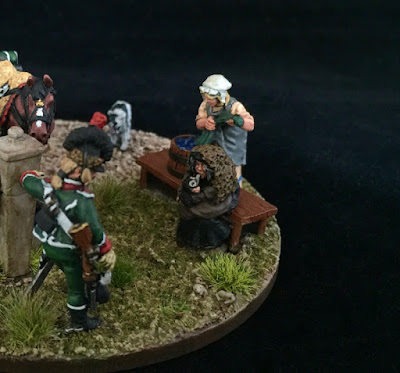 The other overseer is the girl's faithful dog, who can smell trouble a mile away, and is letting everyone know it (those who know our 'Felix' will see a certain resemblance). 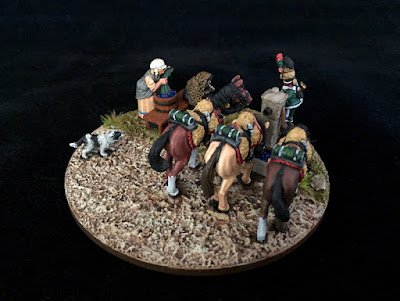 This charming 28mm vignette is offered by Eureka Miniatures (minus the pooch who is from Westfalia).

Okay, as with all of our theme rounds, please remember to cast your votes for your favorite entries. Voting will be open until next 11:45 pm next Saturday.

Enjoy the gallery and have a great week everyone!

Unlike prior Painting Challenges, this year I wanted to actually be on top of my Curtgeld obligations.  The Curtgeld theme this years is a figure characterized as a "risk-taker, daredevil or gambler." I spent a while trying to come up with something Curt might find interesting, and I settled on these three figures.  They are meant to represent Cally Samstag, member of Activated 26, from the Tertiary Reserve of the Oreastean Planetary Defence Force.  She is joined by two fellow members of Activated 26 - Golla Uldana, and Janny Wirmac. Who are these folks? Why would Curt care?  Here is the background...sorry about all the blather...

These are all characters from Dan Abnett's novel "Titanicus".  This is one of my favourite novels, and I think Curt really enjoys it as well. To understand why I thought these characters would be good Curtgeld, I need to share a bit about the novel and its story.

"Titanicus" is set in Games Workshop's 40k universe, and features an "engine war", an invasion of the Forge World of Orestes by the forces of the Archenemy - a traitor Titan Legion. In GW's 40k setting, Forge Worlds are planets given over almost completely to the manufacture of arms and equipment to supply the Imperium's never-ending wars.

The Forge Worlds are run by the Mechanicum, a sort of dark, dystopian sect of machine-worshipping types. Imagine the worst facets of every IT department you have heard of or experienced, combine them with the post-human fantasies of the douchebag entrepreneurs who dominate Silicon Valley, and put them in charge of a whole planet, and you pretty much have the Mechanicum and a Forge World...

Anyway, in "Titanicus", the Forge World of Orestes comes under assault.  Normally, such worlds are well-defended - Forges have their own Titan Legions, and Titans kick ass. Who worries about invasion when a huge force of 100-foot walkers, 200-foot walkers and 300-foot walkers, together with assorted support elements, are handy. But in "Titanicus", most of the Orestean Titan Legion has been sent elsewhere, and the skeleton force left behind is falling rapidly in battle.  The Imperium has messed up, and Orestes is vulnerable. The situation is so desperate the Imperial Governor calls out the tertiary reserves of the Oresetean Planetary Defence Force.

An "engine war" in 40k is the worst kind of battle - Titans vs. Titans, laying waste to everything in sight.  The scale of destruction is enormous, and victory in this context is pyrrhic at best. In such a war, even elite heavy infantry can do little but pray to survive.  The tertiary reserves, the very last line of defence, have even less of a chance.  Cally Samstag, Golla Uldana and Janny Wirmac are members of that reserve, and they go to battle in "Titanicus"... For a 40k setting fan like me, this "engine war" as related by Abnett is, of course, the coolest! Big machines! The Mechanicum! The Archenemy! Massive Titans beating each other to bits! Entire hive cities in ruins! Awesome! But what Dan Abnett does so well as an author, in my opinion, is that he calibrates the context properly.  Through the eyes of Cally Samstag, you see the Titan war not as a fan boy of the genre and setting, but as a real "civilian" might.  Not the vista of heroic, genetically modified soldier, or configured mechanicum engine god, but a regular person, who had been living a regular life, called forth to face terrors you mostly read and heard about, but never thought were real.  It is terrifying - and so well done in the hands and mind of a gifted writer like Abnett.

So why is Cally a "risk-taker, a daredevil or gambler"? Cally and her husband Stefan had relocated to Orestes from a different Imperial world in the hopes of a better life.  Stefan is a skilled labourer, in high demand on Orestes, but Cally is a junior clerk.  To get the permission needed for relocation from the Imperium's Maoist-style government, Cally had to agree to serve with the Tertiary Reserve of the Orestean PDF.


Cally Samstag took a risk of agreeing to join the PDF so she and her husband might have a better life.  When war found them, the gamble catches up with Cally and other members of the reserve...

These figures are 28mm female Arcadian Guard from the excellent Victoria Lamb.  I have to say I was a little disappointed at the amount of flash on the figures - lots and lots of prep needed - but overall, they are just tremendous sculpts, and it is great to see a line of figures which includes female sci-fi troops without having them appear to be complete dork fantasies or BDSM play acting rejects.  The Victoria Lamb sculpts are everything the plastic GW Imperial Guardsmen might have been, and her range of figures affords Imperial Guard fans a whole new outlet to collect for the setting without having to use the roid-addled and overly round plastic Cadians from GW's current line of figures.

I used a colour scheme that would match my other, older, GW Imperial Guard collection.  I don't recall any specifics about colours of the Orestean PDF in the "Titanicus" book, so I thought the colours would work OK...hope you like them dude!

Ahh, Greg, this is just brilliant! As you know I'm a huge fan of Abnett and loved 'Titanicus'. He has that wonderful talent to be able to communicate the 40K universe beyond the 'pew, pew' dorkfest to a manner that adults may actually appreciate. The Cally storyline was one of my favourites from the book as it brought the 'mega-ness' of the situation down to a human level.  Anyway, these are brilliant and I'm very keen to see examples of Victoria Lamb sculpts as I hear that they are magnificent.

Thanks so much Greg!!