Here we are on Xanth, escaped the Androgynstealers with Janey and Sarah's Star Yacht. Looks like a peaceful place, nice and calm, a bit dry. The peace is suddenly broken, when an undead army in blue begins an attack. This again is not what we were looking for, so we quickly dispatch and continue our exploration on the Inner Ring, astronomical west and clockwise to always mysterious Lune - we hope to arrive next week! 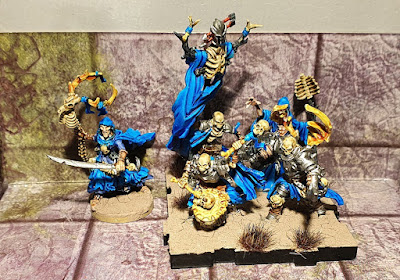 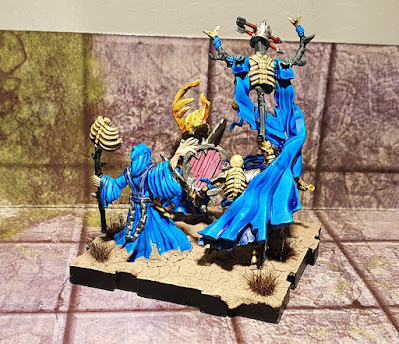 In the world of Runewars there is a faction Waiqar, which is made of undeads. Runewars Miniatures Game was on huge discount last year on the FLGS (out of production of FFG nowadays), so myself and my friend bought the starter box to share. We quickly assembled the starter armies and played two quick games to see, if this is something we want more. We then decided to buy a second starter box and couple of boxes of expansions (basically at the price of one third of original price). Since that we have been painting the armies, but not played - it has been very quiet in the playing front, so that's normal. After these I have only three stands to paint, two infantry stands and mounted Ankaur Maro.

The stand with four persons is called Waiqar Infantry Command Unit and it is used to add to an existing Infantry unit or fight alone. It seems that they are not all skeletons, the Necromancer in the backrow seems to be Emperor Palpatine (or look-a-like), but I'm not sure about the six-pack... I'm not sure, but it might be possible to spread this command unit to different stands, but since I decided that these trays look better when they don't look like trays, I have glued the minis to the tray and covered with basing materials. I have done several stands already, but this was the first one where I glued the minis to the stand BEFORE painting them. What I was thinking during that Zoom session... 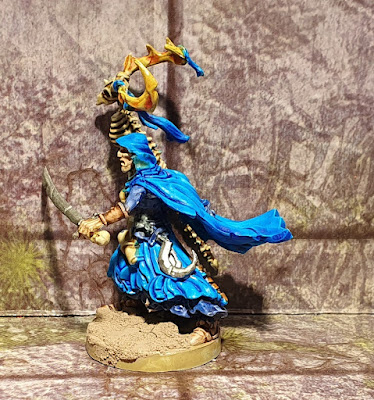 Ankaur Maro needs to replace one regular infantry in a tray, so he can't fight alone (except when mounted, when he fills the whole tray), but since I have not painted the remaining infantry units, he is alone now. I did the initial basing on him, so I just need to glue him on and cover the edges in the end. Maro is a wizard, uses dark magic and is clearly a bad guy. 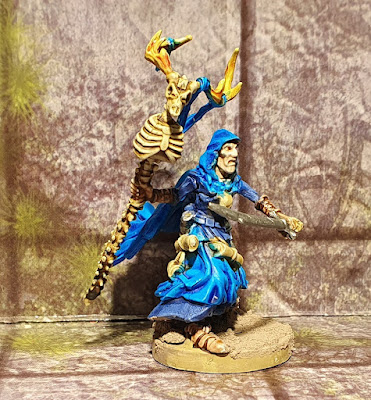 I'm very happy, that the Quartermaster Skeleton find enough of those blue rags, so that the whole unit can wear uniform colours and even carry a flag. Their armor and weapons might be worn and torn, they are wearing rags, but the rags are shining bright and same color - the Quartermaster must be happy. Sometimes I have thought about the logistics of Undead armies, how and where they get their rusty weapons, broken shields and rags, but afraid to lose my sanity, I have not followed that path for long.
That is 5 minis, all in 28mm for total of 25 points. And then Xanth gives 20 bonus points for total of 45! 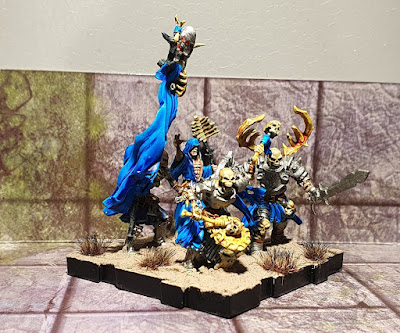 And 11 skulls for the greater good (my first for this Challenge), including the ones used as drumsticks, accessories, staff heads, drum motifs or as heads - not all are human skulls, but One does not care. And if you are counting, Ankaur Maro and "Palpatine" have flesh over their skulls, so they don't count. My son noted, that they were indeed skeletons using bones and skulls as drumsticks and carrying skulls here and there - certain Space Marines from this same Challenge come to my mind, when I think all this. :) 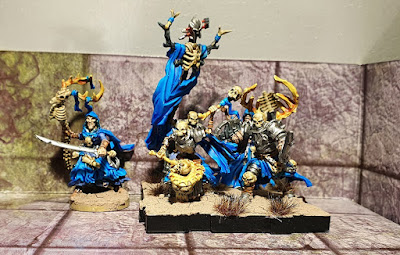 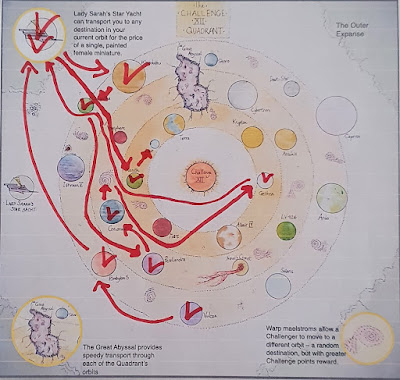 From Millsy:
Lovely work on these undead warriors Teemu! The vibrant, saturated blue you've chosen goes really well against the bones and the arid basing. The way you have the arranged on the base is really dynamic too and shows the minis off very well. Composition is something I try very hard to get right myself and it's a big contributor to making the most of our painting efforts I feel.
Well done on these mate. Hopefully we get to see more given you sound like you have plenty more to paint.
Posted by Teemu Laaksonen at 1:01 am