It was only 2 weeks ago amidst this very challenge that I got obsessive over a single, low point submission. I wouldn't fall into that particular hole again so soon would I?... You know it! 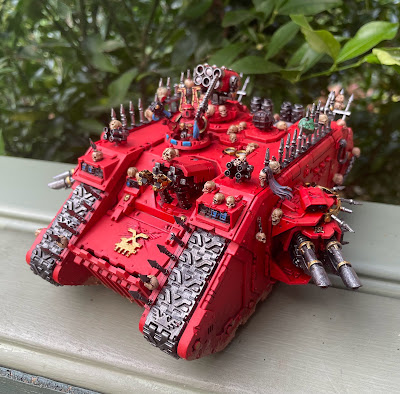 Meet Bloodstorm, a Chaos Landraider with a multitude of Spikey bits and more than the odd skull affixed to the superstructure in praise of the Dark Gods. To be more precise it is a captured and repurposed Imperial vehicle, turned against it former masters - Chaos guys are a bit insidious like that. Its also big and bright and red. Chaos guys like that too. 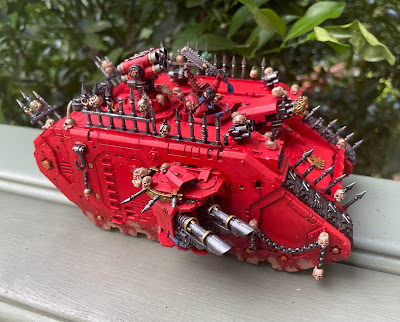 Obviously I went overboard once again with the customisation and the silly amount of layering and edge highlighting (not seen well in the pics) to get the bright, vibrant red colour.  Hopefully that draws the enemy fire and lets the other parts of my army get close enough to breathe sweet nothings in the enemy's ears, before they hack them off (and the rest of the head too, ideally). 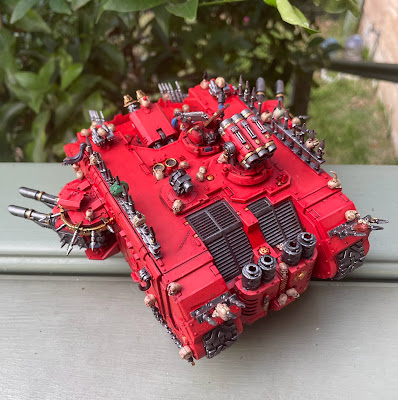 Technically its a 28mm vehicle but this sucker is BIG so I'll leave that for today's handsome and wise Minion to adjudicate, plus 5 points for the berserk vehicle commander - who is true Khorne fashion is trying to climb OUT of the heavily armoured fighting vehicle so he can hit things with his chainsword - Khorne guys REALLY like doing that.

And as as this once Imperial vehicle has been turned against its former masters in an effort to change the Galaxy - so I will claim this doubly transformative state for the planet Cybertron and its 20 bonus points. Plus there is a lot of skullz...

Ahhhh.... Paul I knew I could count on you to both repeat your mistakes AND suck up to me in the process mate. Thanks for not letting me down.

This is a corker of a model. I've painted one of these bad boys myself and I didn't go nearly as nuts on the gribblies as you have. There's a lot of work in here and like mine unfortunately the layering doesn't photograph well so the true effort isn't really obvious.

I bumped into Khorne in the supermarket earlier today. At least I think it was Khorne, it's so hard to tell with masks, etc. and people keeping their distance.
He had a trolley full of red cordial, raw meat and tomato sauce so that's enough for me. He told me to be generous to his followers or suffer his wrath so I'm scoring this monster at 30 points for a total of 50. Praise Khorne!