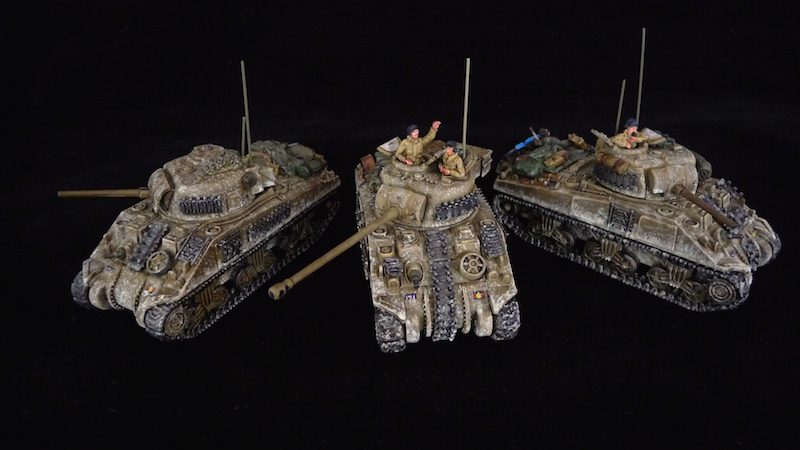 Since I'm slowly (oh, sooo slowly) collecting the forces that fought at the battle of Ortona I thought it best to include some of the Canadian Shermans who were tasked to support their fellow infantry in their assault on the town.  These were A and C Squadron's tanks from The Three Rivers Regiment (a regiment that originated from Trois-Rivieres a town between Montreal an Quebec City). One of extraordinary things I discovered while researching the battle was that there were three brothers who all served in A Squadron, Joe, Gord and Bill Turnbull.

Gord and Joe both served as tank commanders, while Bill, the youngest, was a crewman in another Sherman.

At just eighteen, Bill had been to first to enlist in October 1940. Gord and Joe followed a few weeks later.  Joe, the eldest at twenty-five, had served in the Spanish Civil war in the Mackenzie-Papineau Battalion.  He had first tried to join the Royal Canadian Air Force but when the recruiters discovered about his past service in Spain, which was seen as an illegal act at best and smacked of Communism at worst, they had rejected him out of hand.  So a few weeks later he tried again, this time with the Army and conveniently neglected to bring up his fighting in Spain and as such was welcomed into the fold.

The three brothers were very devoted to one another and Joe in particular felt a great weight of responsibility to get his two younger brothers through the war alive.  This was a tall order with all of them serving in the same tank squadron. In August 19143, in Sicily, eighty-four men in the regiment were killed or wounded and in one battle alone, ten of the thirty tanks of their squadron were knocked out by enemy fire.

After Sicily, the three Turnbull brothers participated in the heavy fighting along the Moro River and then were tasked to enter the vicious urban combat of Ortona.

Joe wrote to his new wife, Peg, just before entering Ortona, explaining why he had become somewhat distant in his correspondence over the previous few months. ‘We are not fighting Italians now but the Germans, and they are in every sense equal to the toughest and finest soldiers in the world. They will not retire. They have to be killed. And there is only one way we can beat them, Peg, we have to be just a little bit tougher and that means we have to be put aside finer human feelings.’

Early in the battle Bill was wounded in the leg and evacuated. A few days later Joe had his tank knocked out in the tight confines of the town’s center.  After helping his crew to bail out of their Sherman Joe became separated from them and was forced to take refuge in a nearby cellar from raking machinegun fire.

Joe’s brother, Gord, saw his older sibling’s tank get knocked out and then observed the escaping crew come under heavy fire. He quickly brought his main gun to bear on the machine gun position and silenced it.  Nonetheless, the resulting dust and debris obscured Gord’s vision so he could not spot his brother afterwards. 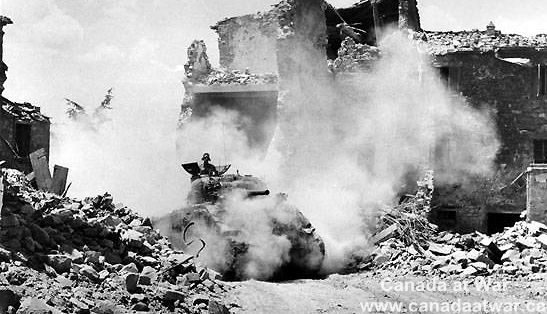 It was not until the end of the battle, when Gord was searching the ruined town for his brother that he came upon him sitting in a shellhole, looking off into the distance, singing ‘Happy Birthday’ to himself (it was indeed his birthday).  Joe looked up and saw Gord, stopped singing, and the two brothers sat together for awhile in quiet companionship.

In the end, after serving through the rest of the Italian Campaign and then through North West Europe the Three Rivers Regiment and the three Turnbull brothers returned home to Canada. 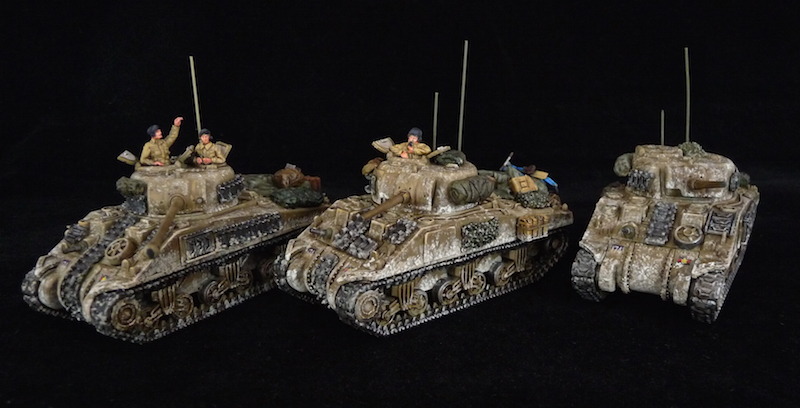 These three 1/72 scale plastic Shermans are from PSC.  Though I'm a bit of a muppet when it comes to doing-up vehicles I found they were great little kits to work. I built one as a ‘Firefly’ with its signature 17 pounder gun.  This in fact is a bit of cheat as ‘Fireflys’ were not issued in the Italian theatre until quite late in the war, but I've always liked the look of them and I thought I would indulge myself.

I like vehicles that look like they've been lived in, with lots of supplies, parts, etc. So I sourced the extra stowage bits (mostly resin with some white metal) from Milicast Models.  Fairly pricy but well worth it I think. 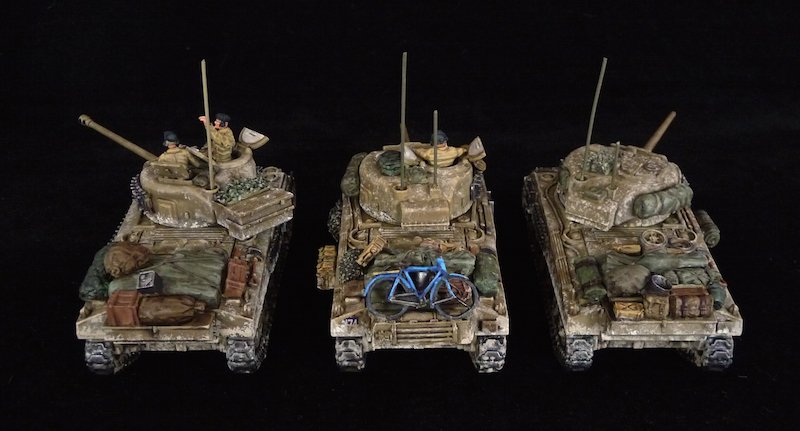 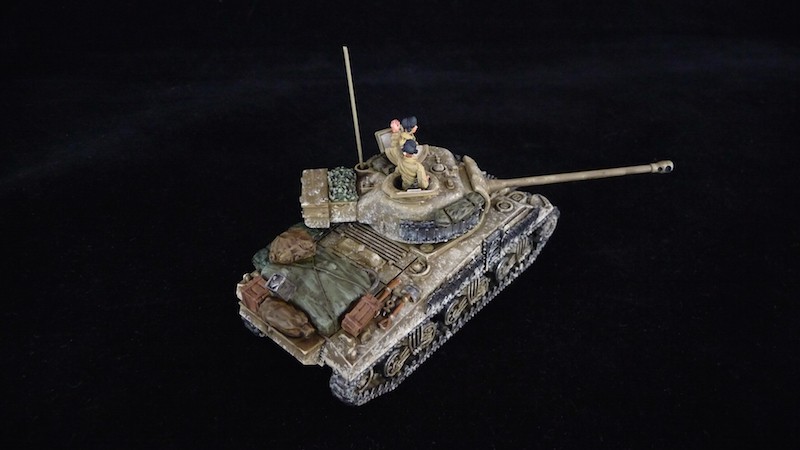 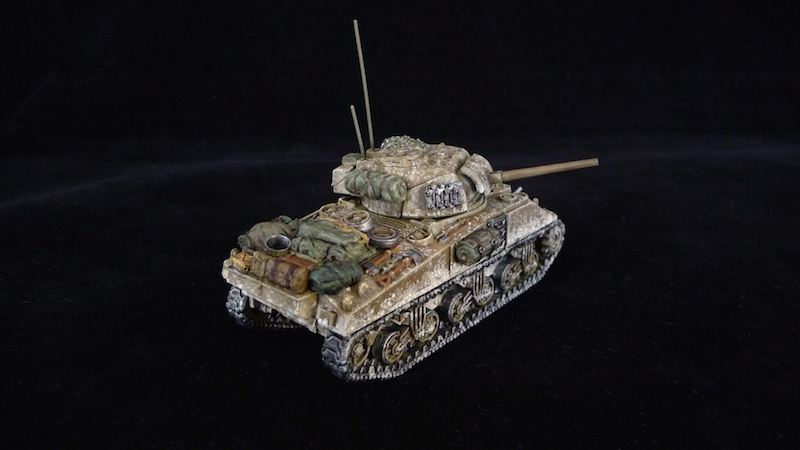 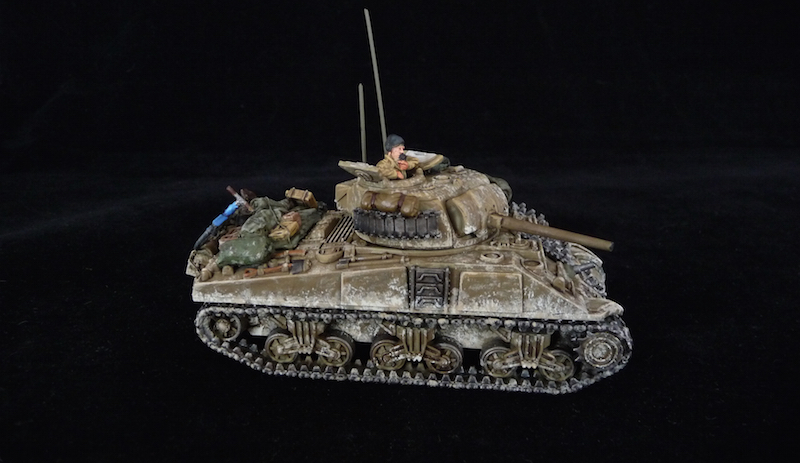 When researching the Three Rivers Regiment I came across a great picture of one of their Shermans with a BSA bicycle strapped to the back of the tank. 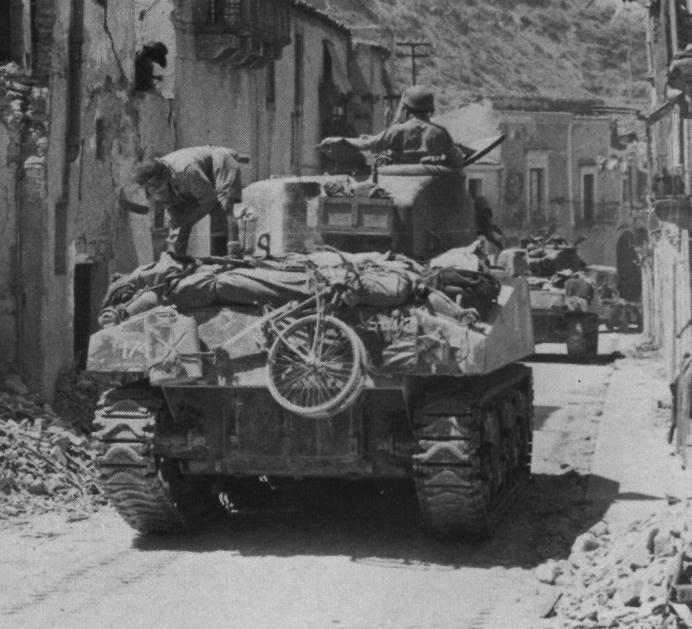 I assume the crew thought it handy for scooting around when they were halted. I thought this quite neat and so sourced a bicycle from SHQ’s 20mm Volksturm range, trimmed off the base, added some new handlebars and positioned it atop the rear deck of one of the Shermans along with its other stowage. 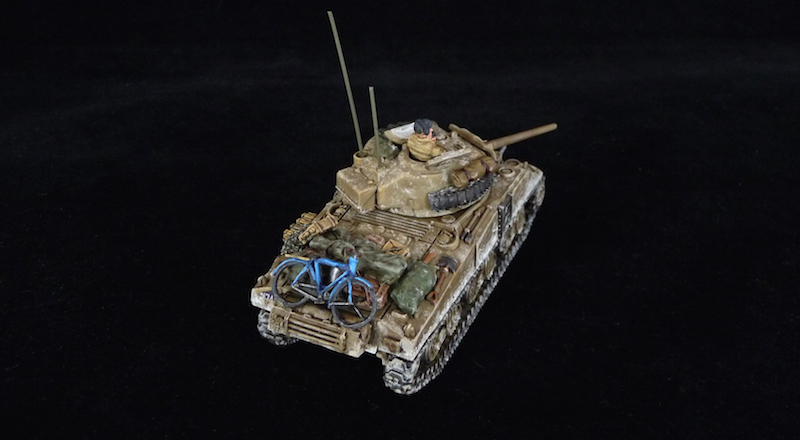 I painted the trio in a basic British bronze khaki without the black 'Micky Mouse' camo pattern often seen in the Italian theatre. It is argued that the Regiment didn't use it at this time and in fact the vehicles may have been holdovers from the North African campaign.  I then heavily drybrushed and dappled them in dust tones as many of the pictures of Shermans at Ortona shows them as being completely filthy and begrimed from the rubble and clouds of dust.


The decals, as discrete as they are, are correct to the Regiment and are from Milicast as well.


So there you have it folks.  Three Shermans, from the Three Rivers, for three Brothers.