I have a very tiny entry as one of Tamsin's Tuesday Tigers, tiny in both scale and points.   It's been a busy week and I'm working on the rest of my Germanic war band for next week, hopefully.

This Christmas Santa gave me an Elegoo Mars Pro 3 printer and I eagerly fired it up to print the test file that comes with the machine.   Alas, my first attempt produced a block of resin, and drained all the resin in the tank.   The best advice I got was that the LCD screen that shipped with the machine was defective and was just pouring light all over the tank. 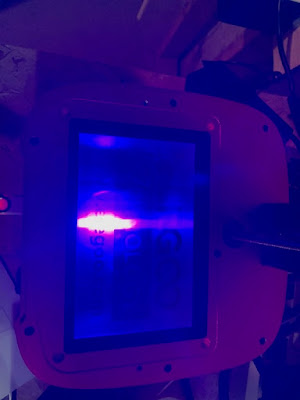 Elegoo came through and sent me a replacement LCD screen, but the downside was that I had to remove the old one and install the new one, slow trembling step by slow trembling step, watching a YouTube video as I went.  It was nervewracking, because I'm not terribly technical, but I was successful and the test piece printed, so I felt quite heroic (hence the Glorantha part of this post - more to follow).

I know that there are some 3D printing veterans in this Challenge, but I'm finding it all new and exciting, so here are my first 3D prints, from Turner Miniatures.  Henry Turner is a prolific designer of 3D figures that can scale from 6mm to 15mm.  He's primarily known for his two Europe Asunder Kickstarters, the first being infantry and artillery, the second, which I've backed, being focused on cavalry.

Until now the only 6mm cavalry figures I've painted are metal castings from Baccus.  I was pleasantly surprised by how much detail Henry packs into these little guys.  They were enormous fun to paint. 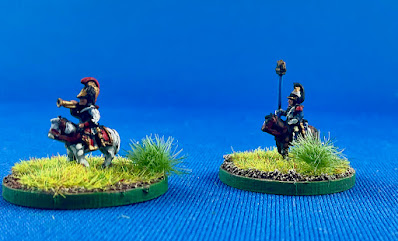 I'm calling these figures 6mm, though from the base to the top of the head is almost 15mm.  However, they compare quite favourably to my 6mm Baccus figures and on the table I doubt I could tell them apart. Right, that's the test figures done, can't wait to start printing and painting these guys by the squadron and by the battalion! 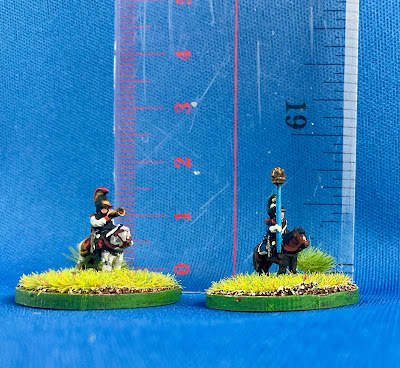 So how do I justify Glorantha with this tiny entry?  Because heroes come in all shapes and sizes, and these two dashing cuirassiers are as heroic as they come (really, would you argue with them?), and because I took the 3D printing plunge and then fixed my machine.  QED, I am, to quote Lord Flashheart, a bally hero.
Finally, here's a bit of fun.   Henry Turner offers this free .STL file, "Caporal Frosty".   He's appropriate for this snowy cold day where I live.   I scaled the file up to 15mm before printing.
Perhaps, before he abandoned the Grande Army in Russia, Napoleon asked for a body double so his troops didn't know they'd been abandoned, and this was what he got?   Or maybe it was bait to lure the Cossacks off the trail?   Hmm, that almost sounds like a Babylon 5 entry, but I'll refrain. 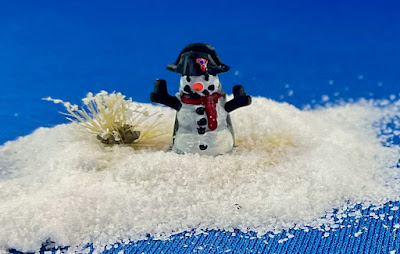 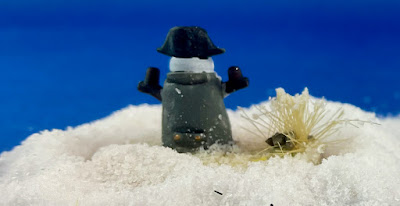