The 'Music/Musician' Theme is now up for Viewing! (and Curt's 'Alpine Duet') 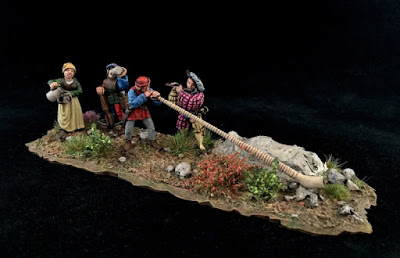 The third Theme Round of Challenge VIII is now up for your viewing pleasure!

This fortnight's theme is 'Music/Musician' and we have 34 participants who have submitted entries for your enjoyment. In the theme gallery you will see every assortment of lute, drum and horn (plus a few other instruments thrown in between the registers).

Please click here, or on the 'Bonus Theme' link in the navigation bar above to take in the efforts of the participants. Again, once you're there, please use the links on the right sidebar to navigate through the entries. As I mentioned before, there is a bug in Blogger in how it displays multiple entries over several pages on a single day, so use the links in the sidebar so you are sure to see everyone's entries.


It was a bit of a scramble for me this week, but for my entry I've come up with a vignette that I've been wanting to do since I began my Italian Wars project a few years ago: a Swiss alphorn player calling out to his reisläufer camarades. 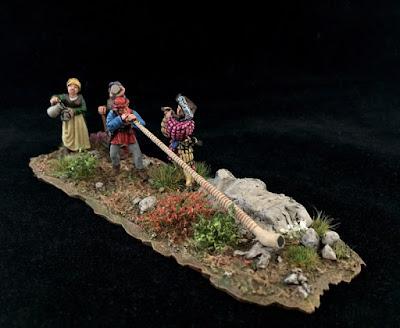 A very unique instrument, the alphorn has its roots extending back to antiquity, with theories believing that it originated with the lituus war horn from the Etruscan period.  Early medieval alpine myths frequently refer to the horn being used as a signalling device between mountain villages, while the first documented reference of the word 'alphorn' is in a 1527 account book of a Cistercian abby, where an alphorn player was paid two Batzen for his playing. 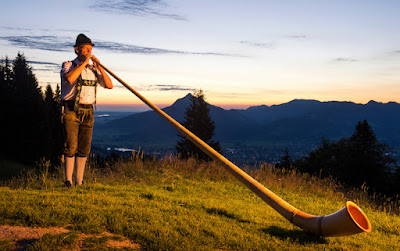 So with this in mind, I've extrapolated that if the alphorn was a fairly common instrument amongst the Swiss from at least the early medieval period, one could conjecture that they would have used them in their military campaigns, for signalling purposes and, like the highland pipes, to raise the morale of their fighting men. 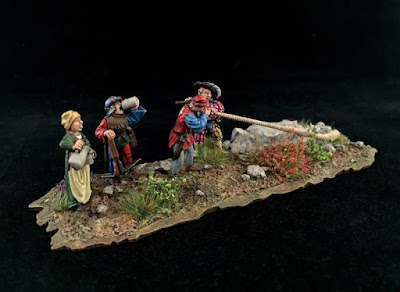 As there are no alphorn figures in the market (a shocking oversight, I know) I made my own by bisecting the torso of a Perry Swiss musician, removed his existing instrument, and reposed him (aided with a liberal amount of wire and green stuff) to accept his 10 foot alphorn. 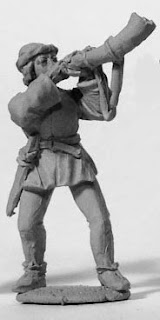 The alphorn itself was made from a length of plastic rod with greenstuff wrapped around it and then sanded to shape. 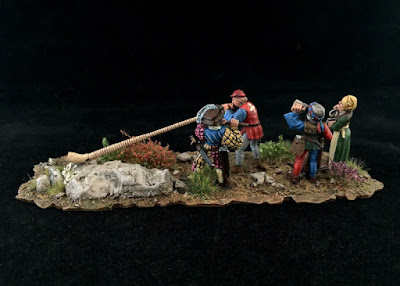 
Now, please visit the theme gallery and enjoy the wonderful entries for 'Music/Musician' and remember to vote for your favourite submissions (voting closes next Saturday at 11:45pm).