The 'Sport' Theme Round is Up! ...and Curt's 'Wilhelm Tell's Apple Shot' 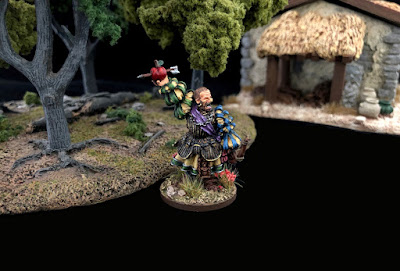 Our second Bonus Theme Round is now up for viewing, so please head over to the gallery and enjoy all the entries.

This round the theme is 'Sport' and we have all manner of interpretation of the topic from tennis courts, and archery butts to Bloodbowl teams and Iroquois playing lacrosse.

After you've enjoyed in the gallery please take a little time to vote for your favourite entries.

Again, one thing to note: Blogger has a glitch dealing with large uploads occurring over a short period of time, where when you advance to view the next submission it may skip one or two ahead. Yes, very aggravating and it's been an issue for years. Anyway, the way to ensure you're seeing all the entries is to use the submission list on the right sidebar to advance through the list of submissions.


I interpreted the theme as 'to make sport of', meaning to try to ridicule or make mockery of something.

Early in the 14th century, Swiss legend has it that William Tell was made sport of when Albrecht Gessler, the Austian vogt (officer) of the Swiss principality of Uri, demanded that he shoot the apple resting on Tell's son's head.

This challenge originated from a situation in which Tell pointedly decided not to salute the authority of the Austrian crown as he entered the town of Altdorf (this being Gessler's hat sitting atop a pole placed alongside the road to town).

Seeing this act of defiance, Tell and his son, Walter, were arrested by the town constables and presented to Gessler for judgement. The Tells were cruelly sentenced to death for William's temerity of not recognising the power of Switzerland's Austrian overlords. Nonetheless, Gessler, knowing Tell was a renown crossbowman, wanted to make nasty sport from his prisoner's expense, and so decreed that he would commute their execution if Tell could shoot the apple off the head of his son.

The young Walter was tied against a tree, with an apple duly resting on his head.  William silently drew two crossbow bolts from his quiver, socketed one, took aim and deftly struck the apple from atop his son's head. Gessler was very impressed, but wondered why Tell had drawn two crossbow bolts when only one was needed.  Tell cooly looked at Gessler and said the second bolt was meant for him if he missed his first shot.

William Tell's act of defiance has become part of Swiss legend and lore, being recognized as the first spark of the Swiss rebellion which led to the foundation of the later Swiss Confederacy. 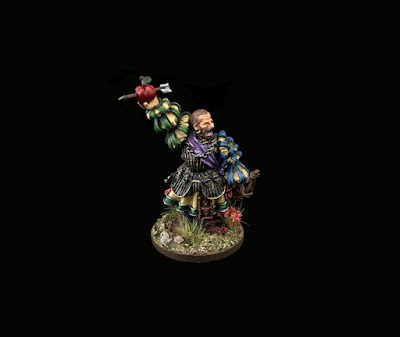 The figure shown here, depicting 'Wilhelm von Tell' in victory, is from Lead Adventure Miniatures.  He was sculpted by Igor Karpov who has a very distinctive, characterful style, with lots of heavy detail to loose your brush in. While the William Tell story is from the medieval period, he's shown here in high Renaissance garb, with slashed sleeves and  wearing a tasseted, flutted breastplate. A great figure to paint. 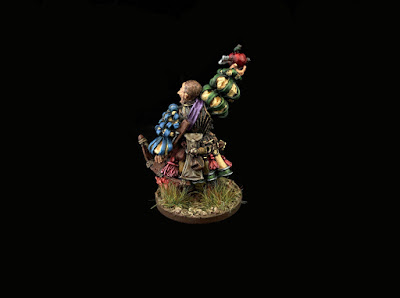 Okay, the next fortnight theme is 'Mercenary' so start thinking of suitable creations for that most cunning and machiavellian bonus round.

Have a great week everybody!