Wow, I'm wrung out. I believe I managed a little over 50 posts over the weekend. Good work people!

I think I have us pegged at around 900 entries over the three months of the Challenge. Amazing. I'll let Miles do his statistical magic later this week and we can sit back, slack-jawed, and marvel at our awesomeness.

I'm a little bit too stupefied to really string anything coherent together, other than to say the past three months were tremendous good fun, my team of 'minions' were absolutely brilliant and I couldn't have hoped for a better group of Challengers. I thank you all.


For me, this last week was a flurry of deadlines, both at work and at home. I knew I'd be knackered, but I also knew I wanted to get in one last 'charge of pike' in my Renaissance Men duel with Peter, so here it is. 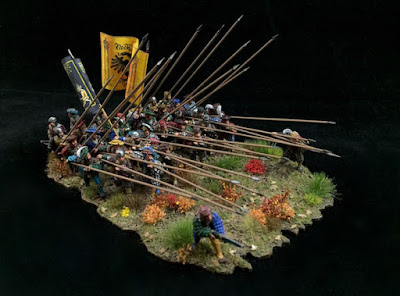 This is an Italian Wars period Landsknecht pike block. It's composed of 33 figures and one casualty.  The models were sourced from Foundry, Pro Gloria and Artizan.

I've painted a lot of models in my time; Napoleonics, ECW, SCW, Imperial Space Marines, Samurai, the works, but I tell you, Landsknechts are probably the hardest figures I've ever tackled. Historically they had  no real uniform, but their clothes were incredibly complex, with multiple layers, puff and slash sleeves, ornate codpieces, stripes, AND on top of this, were seen in a veritable rainbow of colours. In painting terms, every figure should be unique, without a design being repeated. So basically a huge gong show for a painter. Nevertheless, I pecked away, one-by-one, took my time and ground ahead as there's just no shortcuts with these guys. 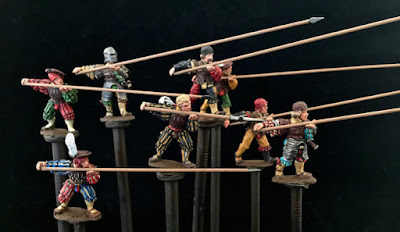 The irregular shaped bases you see here are of my own design which I sourced from the good folks over at Warbases. The banners are from Pete's Flags, depicting an Imperial colour (in yellow) and another that is conjectured to be of 'The Black Band' or the 'Bande Nere' (basically a bunch of German hooligans who holidayed in Italy until they were pointedly told to leave i.e. virtually killed to a man). 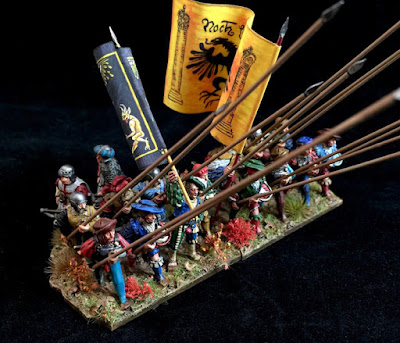 What you see here is two thirds of what the final unit will look like. I have a central portion of bases that will add another 16 or so figures to the unit, so it can be fielded as larger pike block if the scenario requires it. The trick was to have a few flags on the flanking bases in order to allow me to scale the unit up or down as needed, while still having some banners for the smaller unit size. I think it worked out okay, but I think it will be even better with the central section done with another two or three banners crammed in there. 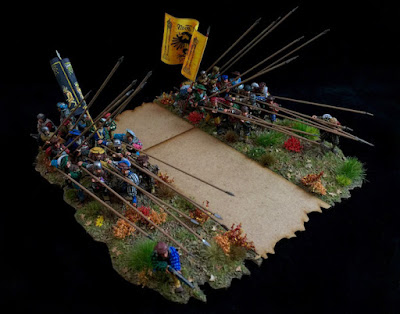 As to risk takers? Well, one troop type prevalent amongst the Landsknechte were the Doppelsöldner or 'double-pay men'. Often these loons would be tasked to fight in front of the forward rank, wielding two-handed swords, halberds or an arquebus. Their job was to get in tight and disrupt the opposing infantry pikemen. Either by sweeping aside their pikes and/or disrupting their lines by close combat. If the accounts are true then they must have been the badasses of a regiment of badasses and I imagine they probably earned every florin they received.


I have placed two Doppelsöldners ahead of the pike block, one is armed with a halberd, going in hard, and the other is giving fire with his arquebus, hoping for the best. 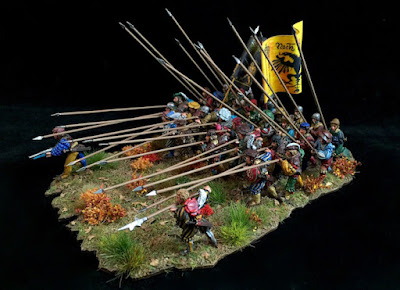 I also have a couple of Italian mercenary crossbowmen about to come out of the rear ranks (From what I read, 'military subcontracting' was fairly common during the period). As I understand it, missile troops would typically hide in among the pikeblock until an opportunity developed for them to come out and wreak a bit of havoc. 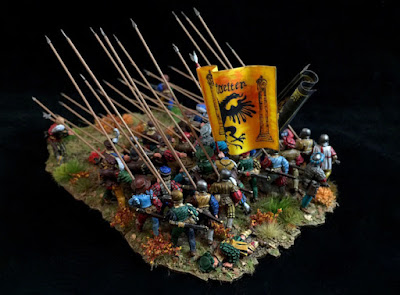 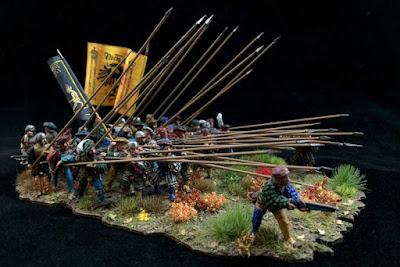 I was hoping to get the whole unit completed but, hey, you know the story. I'm just happy to have gotten these lads done for the close of the Challenge.

Okay, for points this unit puts me at 167, for a grand total of 429 in the Renaissance Men duel. If my math is correct, Peter is currently sitting at 417 points, so I think I may have pipped him at the post.  Really it doesn't matter what the math is, it was a great combat of brushes, and I think we both came away as winners as we now have a bunch more units to enjoy. Peter, thanks for the fun - you were a great sport and I hope we can do something similar for the next Challenge.

Okay, next Sunday I will be presenting the prizes for the various point tiers and Sarah will award her Sarah's Choice award. I will also continue to present my Tribute figures to my most wondrous Adjudicators, so please keep visiting to see what is happening.


In regards to the Challengers' and People's Choice awards, I'm going to combine them and organize the selection much like our theme rounds. I'd like everyone to email me their top three choices of all the entries and I will run the whole lot as a theme round. That way everyone will get to see what others have chosen and we have an opportunity to see a wide assortment of great entries that were submitted over the three months of the Challenge. Please send me your choices by midnight this Saturday and I will organize the Theme round for Sunday.

There you have it folks. The Sixth Annual Analogue Hobbies Painting Challenge has concluded.

Best To You All,

So, this is it, my last post in my first Challenge. And what a roller coaster it's been!

I'm not going to pretend that I'm a demon painter having a slow couple of months; those of you who have seen my work over at Canister and Grape will know that I work at a rather measured pace.

Let's review; 20 figs prior to this post, not by any means earth-shattering, but not bad for a tyro.

And here are my last two figures for the 6th Challenge; in keeping with the prevailing theme of the last day, it's more Frostgrave. (Has everyone been saving these up for the home stretch? Everything's coming up Frostgrave!)

First, a Ranger, assembled from the excellent Frostgrave Soldiers box. 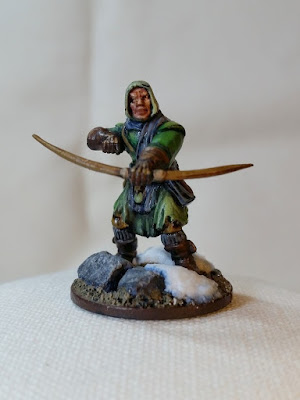 I went for a green palette as a kind of visual shorthand; "LOOK AT ME! I'M A RANGER!" 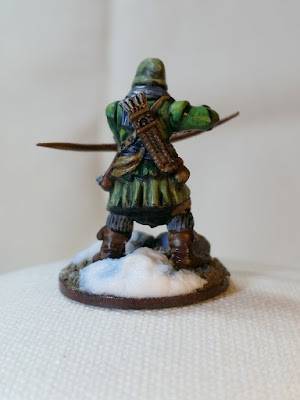 Next up is the Infantryman, with the air of a man who has seen better days; the clothing is bright, but is motheaten and without insignia or heraldic charge. The only obviously expensive item he owns is a two-handed sword. 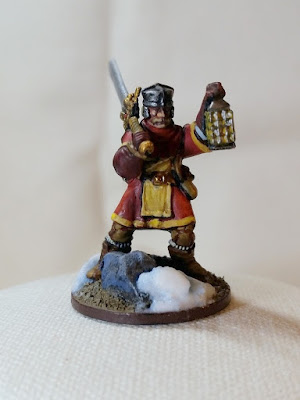 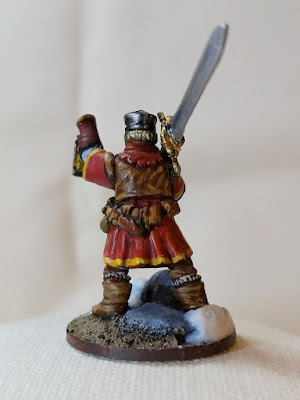 So that's it from me. Its been an enjoyable and instructive experience, and looking back, I can see the benefits of having shedloads of primed and based figures in reserve BEFORE kicking off. This goes double for Bonus Rounds; so many ideas proved impracticable in the face of poor preparation!

The tally stands at 22 figures, all 28mm or thereabouts, working out to around seven a month on average. Nine of those were in a single submission as well, but let's gloss over that and take a look at the finished articles. 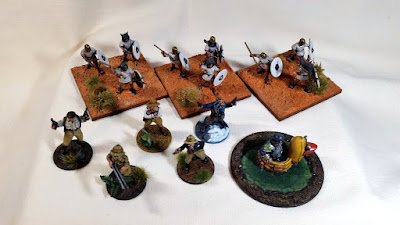 Fantasy, Ancients, Medieval, pulp adventure, and even a World War II hero, so that's a varied bunch of figures. It's been a great experience, and I'm honoured to have been a part of it, seeing the work of some truly brilliant painters and modellers.

Thanks go to the many fine sponsors of the Challenge, to my good mate Millsy in his role as Antipodean Adjudicator and all-round good bloke, and to all the other minions whose skills in rounding up this ragtag band of misfits have entertained and enthralled me over the last three months.

And last but far from least, thanks go out to that Prince of the Prairie, the Snowlord Himself, Curtis Q. Campbell (the Q stands for 'Quality'!) for busting his bottom in the cause of ever-greater fellowship among the painters and bloggers of the hobby world. We couldn't have done it without you!

Time to rest up for a bit now, but who knows, I might be up for another go by December...

Brrriilliant! Love it Ev. Even though you've succumbed to the Frostgrave scourge you continued to produce high quality work to the very end.  The green Ranger is, well, green and so obviously a Ranger, but he looks to be a really nice guy.  The lantern-toting infantryman definitely has a sartorial streak, but by the look of his sword he's obviously compensating for something.  I can't put my finger on it, and, funny enough, that's exactly what the lady's say too. <ba-dum-pish> Yup, I'm here with Ev, playing twice nightly - we do charades and dance a nice soft-shoe as well. ;)

I clearly remember at the announcement of this year's Challenge you professed you had other things to do (for THREE MONTHS?). But then apparently Millsy had you over dinner and withheld your dessert until you succumbed. Millsy's a very good man as we'd have been a poorer group without you Mr. Hughes. Thanks for your participation, madcap humour and good will. Just so you know, I've already marked I you down for Challenge VII, so don't bother trying to wriggle out of it. Now, start priming you lazy git.  :)