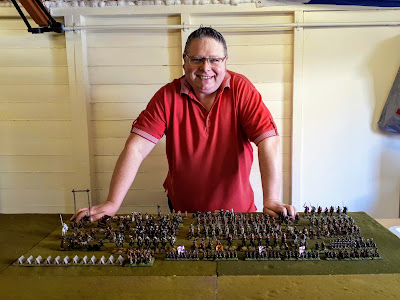 Sadly that's another Challenge all over and I was just getting on a roll. I hope I can keep up at least half of the effort I put in, for the rest of the year........can't see it happening though???
I've gotta admit I feel pretty pleased with myself, I've earned 2274 points placing me 8th in the Challenge, which is my third highest placing and third best points total.

I don't know if anyone noticed but the majority of my figures painted were for one set of rules
Donnybrook???

And I managed 2nd place in the Sport Bonus Round for my Lacrosse figures!!!

So a good Challenge for me all round! 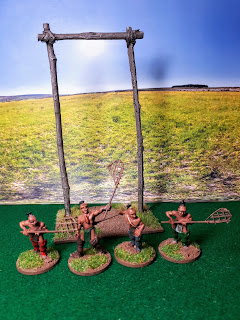 Sadly, adjudicating this last duel was sidetracked, as I finish the second to last step of moving from HerrRobert to HerrDoktorRobert. With that (mostly) finished, and my evil plot to seize the lordship of the statistics well underway, Iannick and I can meet at High Midnight. It's a suitably necromantic night here in Northern California, with thunder and lightning, pouring rain and the dead fleeing the flooding cemeteries for higher, drier ground.

We would like to nominate one figure we have completed during the Challenge as our best looking undead figure. We propose a post at the end of the Challenge, showcasing our fav undead figures, with the Challengers voting by comment on whichever figure they deem the prettiest.

Prize: Runners up provide a figure to the Winner

Iannick has three entries to choose from:
From these worthy contenders, his chosen challenger is his sexy AF liche: 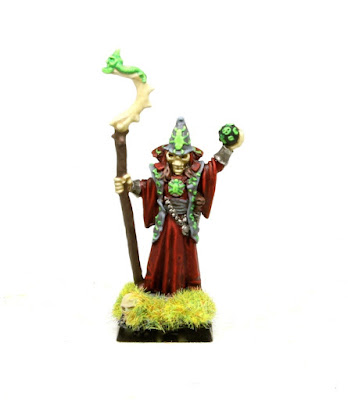 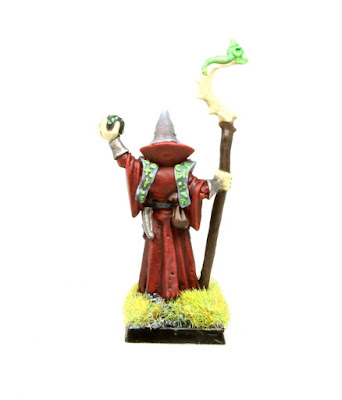 Got to admit, as liche's go, he's pretty sexy. Pomponia would probably go for him.

I also have three entries to choose from:
While Pomponia is clamoring to be turned loose to do her worst, I nominate a wraith to wrap Iannick's liche in the warm embrace of my victory in this duel: 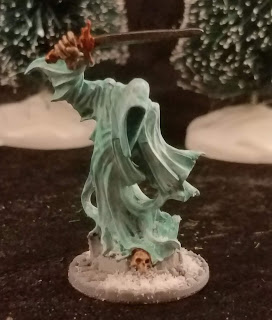 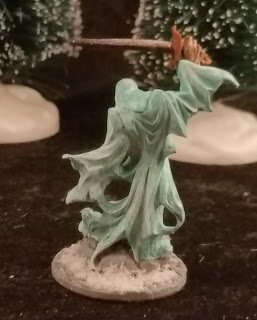 There you have it, Challengers! Be ye Team Liche, or be ye Team Wraith?

The Snowlord has graciously deigned to release you of your torrid obligation to declare your fealty below. Merely signal your allegiance in the poll to your left. Voting will close on Sunday.

Well the 9th challenge is in the books. 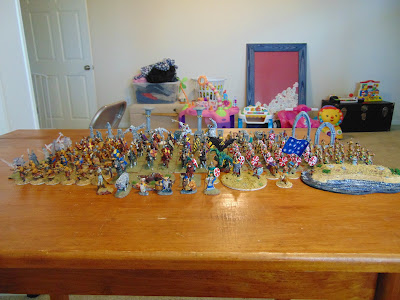 I had a unique experience ( for me at least) in that I painted every single miniature i planned on painting at the start of the challenge and more. How cool is that?! I finished a Norman warband that doubles as a Crusader warband and started a late Roman warband. 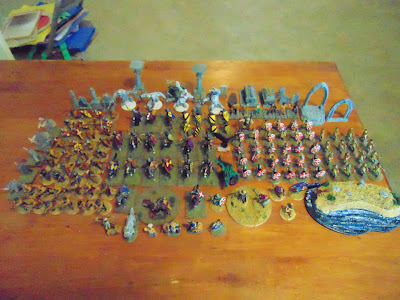 I also painted up a bunch pulp heroes monsters and some heroes for a Spanish or Andalusia Moore army should if I should wish to make one.  Also the water feature round got a long standing to do project done.

All in all a great challenge. Thanks to all those who took the time to comment and vote for me. She you next year.

From StuartL - A Squirrel by any other name.

Was that really three months? Sure, it felt like it when I was putting brush to mini for the umpteenth time, but looking back it seems like only yesterday I was wondering what madness I had signed myself up for.
As it turned out, it was a madness I embraced all to readily.

At the start of the challenge, I thought a modest target of 500 points would be reasonable. I usually average about 30 minis a month, so 500 didn't seem to extreme. As it was, I managed around 90 models per month, with a grand total of 269 figures, (counting the multi-based 6mm minis as 1 figure per base), over the course of the challenge. Of course, during that time I practically gave up every aspect of my life except for work and those odd times when my wife dragged me away from the painting table and threatened me with violence if I didn't put the brush down. 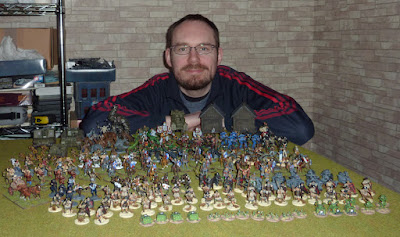 I understand that a mug shot and a picture of all the painted models is obligatory at this point.

I began the challenge with the intent to post comments on everyone's entries, but that swiftly became a difficult proposition. The only time I could find a chance to post was during my daily commute and the volume of entries quickly created a backlog that I couldn't work through. So, I would like to take this opportunity to say that I have thoroughly enjoyed looking at everyone's work, whether they entered just a couple of small groups of minis or painted an entire army or three. The sheer enthusiasm for the hobby is astounding and I am glad to have had the chance to participate. 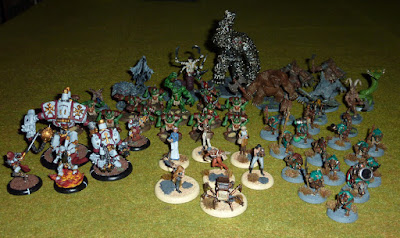 My entries can be divided up into 4 smaller categories. The first is the Fantasy group. I had some of these models lying around for ages, though the Blood Bowl team was donated by a friend for the sports round and the Warmachine figures were done for a friend's collection. 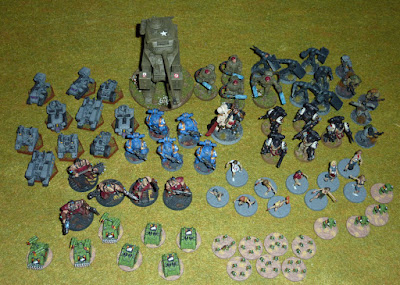 The second group is SF and is the only one where I varied scales. The Epic minis were certainly a challenge as they are so small. I did my best to get them looking prettier than just a small green lump. This challenge certainly gave me a chance to try out different techniques. 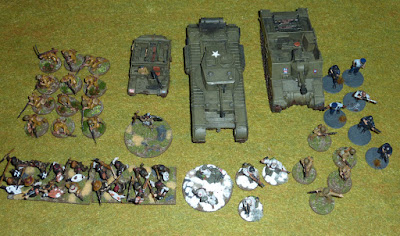 This small group is Modern Historicals. I play a lot of Bolt Action and Black Powder, so have plenty of armies half built and in need of reinforcements. The British armour, AZW minis and Japanese infantry will go to join their brethren in their respective army cases. The Germans in winter gear and the Poles will form the start of all new forces. 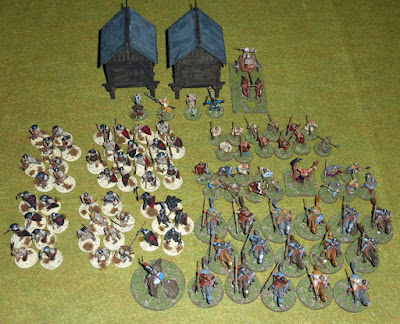 And finally the main Historicals. I had a plan to paint up three large batches of figures over the challenge. The Crusaders on the left and the Bretons on the right were two of them. Sadly the third never materialized due to logistics issues.

I am very happy with finishing in 10th place. Truth be told, it is far better than I expected. My hat is off to those who finished in the top places. Even if I had had more free time, I don't think I could have managed much more painting. As it was I felt really burned out towards the end and have taken a 1 week break from my hobby room to clear my head a bit. The last couple of days I had to force myself to pick up a brush to finish off the last licks of paint on my final entries. I actually had the day off on the final day of the event, so I could have done another squad of something, but at that point I would rather have taken a hammer to my figures than a brush.

Which brings me to the Squirrel Side Duel. Despite claims to the effect that I only had 1 Squirrel wearing a series of ever more elaborate hats, I am very, very happy with my victory. I thought Noel was going to win it, simply because he outpaints everyone. I knew that to stand a chance, I had to paint smarter. You'll notice that a lot of my entries are quite small. Throughout the time I was working on the bigger groups, I had one or two smaller groups of figures on the sidelines. When I had spare paint in the pallet, I would grab one of them and add a quick coat. I also kept a set of notes on my desk of what was in the queue, what could go in next and what I had posted. I tried to move an entry into each column each week to ensure a steady output, with the final couple of weeks being focused on getting the last few details in on a bunch of different entries.

So that's about it from me. I would like to thank Curt (I have some Curtgeld that I need to finish off once my painting hiatus is done), and Lady Sarah for hosting the event. Ev, my minion for his fair and even-handed scoring, as well as the special guest minions who stepped in when needed. I'd like to say thank you for everyone's kind comments on my entries and I would like to thank Noel for giving me a serious run for my money on the Squirrel Duel.

Despite vowing never to paint again once I posted my final entry, I think I would quite like to come back for the next challenge. I have a novel idea for what I would like to enter, but it will probably take me several months to get everything I need built and prepped. Plus I am likely to change my mind and go chasing off after the next Squirrel that comes my way.

From DaveD - Challenge IX Round up

So another challenge painting season has come and gone , and my 8th time participating  - personally its been a pretty good one. First up I met my challenge target - doing this in the last week. I also managed to post something every week which kept the productivity up.  I only did one bonus round as i didn't feel like committing to them this year as I had a plan already. Millsy and I had a little side duel -which thanks to Mlllsy choosing in a moment of heat induced madness to hand paint heraldic designs saw me reach our target first - though we both agreed to settle the forfeit as we had chosen injured forces charities in the UK and Oz - i will settle for the future bragging rights and slapdowns...

I had a few projects in mind - 15mm WW2, 1/200th Aircraft, terrain stuff , Sudan odd bits and these progressed nicely, 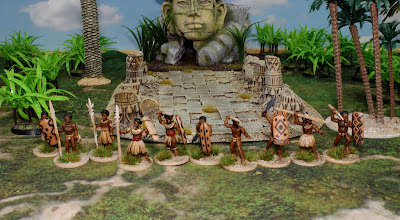 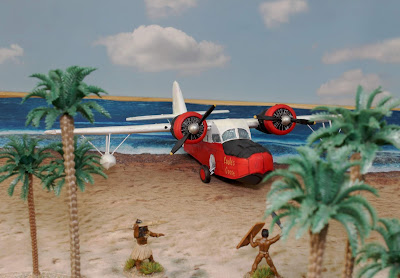 I have really enjoyed doing the various aircraft this season. i just need to properly sort out more flight stands and storage arrangements. especially as I  have also just sourced 3 c47s and Waco gliders - so more coming up soon

I see a nomination for challengers choice for my Landing craft - appreciated ! - they were certainly hard work

I have a D Day game pencilled in for June (with JamesM and MarticC) - to coincide with the 75th anniversary - so the upcoming focus  will be more US infantry and Paras and terrain bits for UTAH beach.

once more thanks to all the back room minions, the Snowlord and  Lady Sarah for making this happen

I ran a few paint and chats over the season - though not as many as i had wished due to a few technical gremlins and then being a ill in the last week .

Until next time!  remember your "little helper" pills are available for the challenge asylum check out desk... just leave the blue ones for Noel, Miles and Martin .. who are now wondering  where the hell to put everything!
Posted by DaveD at 2:41 am 11 comments

Season IX was my fifth Challenge and every year I think its been the most enjoyable one so far!  This year I not only surpassed my goal but set a new PB despite some work travel, which was satisfying.  In terms of other achievements:
I also was very pleased to be a part of Curt's 'elite' backstage roadie crew where I filled the slot of Duels Wallah. While there were far less kick-backs than I had anticipated, I was really glad to help put on this amazing activity.

Thanks indeed to Curt for his ceaseless endeavours to put on the premier hobby event of the year, to Lady Sarah for enabling Curt to do so, and to all the Challengers who make this event come to life with their submissions, encouraging comments and positive attitudes.  I'm already planning my projects for AHPC X!
Posted by Paul O'G at 2:22 am 26 comments