This week I have concentrated on WW2 though in two separate scales. The first is a continuance of my British Expeditionary Force (BEF) project for Bolt Action  and the second in the first platoon of a Grenadier Company for FoW4.

These two carriers are for my BEF force that I am putting together for Bolt Action and come from Warlord Games with crew included. If you are wondering why their skirts may be missing it seems to be a design flaw in the kit and they are impossible to put on. That being said it is otherwise a fine plastic kit. These UC's will provide an armored transport and light support option for my force and are so iconic they are a must have in any British force! 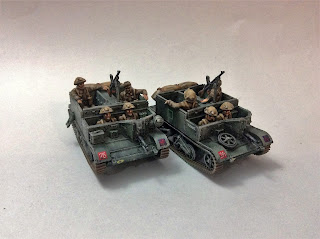 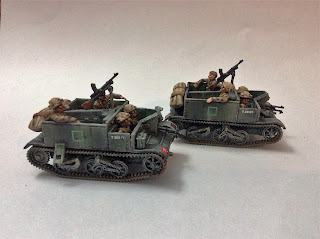 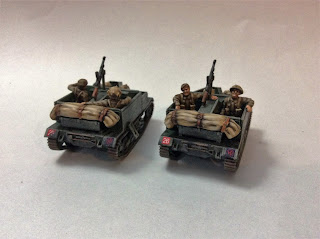 After playing Bolt Action exclusively for almost four years I wanted to paint and play in some different scales. I was fortunate to meet up with an old friend recently who is focused on 15mm WW2 and this got me interested in the FoW miniatures and whilst I would not normally have jumped into FoW with a new version coming out and the promise of streamlined rules I decided to paint up an army in preparation.

These guys are the first platoon in a company made up of three 9 man sections and a 3 man platoon command team. They are going to be themed around Normandy in 1944 and I am hoping to complete the Company during the challenge including vehicle support options. 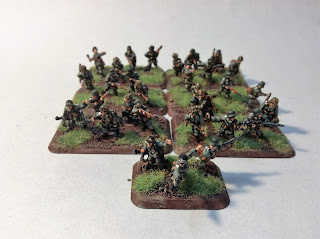 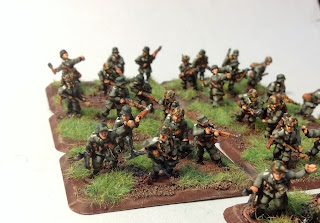 Nice work Patch!  A mix of scale for different periods of WW2 is a great way to mix it up.  That is a total of 130 points, comprising 70 for those lovely Bren Carriers (2 Vehicles + 4 crew/riders each) and 60 points for your 30 15mm Germans.


More 30k stuff - This is a Whirlwind Scorpius, a multiple rocket launcher support vehicle for the troops of the 16th Legion, the Warmasters' own Sons of Horus. While I am trying to expand the collection into some other Legions, I still have a bias toward the 16th Legion, and somehow the Sons of Horus seem to have first claim on new model purchases...it's what Horus would do, after all...this model has been sitting around since just after our great big 30k mega game in October of 2015 - nice to finally get it done!


I generally dislike long range artillery vehicles being represented on the table for a skirmish game, particularly in 28mm, but the Whirlwind is one of those iconic 30k/40k vehicles for fans like me that are fun to have in the collection.  Games Workshop has made many versions of this model over the history of the game, but they all generally do the same thing - drop explosive rockets on the heads of opponents!  Let any who oppose the Hope and Change of the Warmaster flee in terror...


This particular model is from Forge World, a mixed resin and plastic model kit.  I really like the look and design, as the Forge World guys have designed a sharp looking launcher while combining many throw-back features which are shout-outs to the original plastic model.   That nostalgia stuff gets me every time!

The Sons of Horus will look forward to an opportunity to use this new toy to wipe the galaxy clean of fools who cling to belief in the so-called "Emperor".  This one vehicle should get me 15 points. And now, on to some more 30k stuff...

Its always nice to get a model completed after it has been sitting around for awhile waiting for attention (if only I did that more consistently!) - 15 points for this big, bad beastie!
Paul & Alan
Posted by Greg B at 1:39 pm 17 comments

My second submission today features a new Legion for my 30k collection - the 20th Legion, known as the Alpha Legion.  The Alphas have one of the more entertaining back stories among the numerous legions featured in GW's "Horus Heresy" setting.  The other Legions have elaborate histories - some noble, some bloody, nearly all grim, and all with long service in the endless wars which abetted the rise of the Emperor and the establishment of the Imperium.

The history of the Alphas, on the other hand, is not well known, on purpose.  They started off as a black ops, special forces-type organization, used by the Emperor and his senior officials for specialized activities of the sort that archivists were not meant to record. Eventually the demands of the "great crusade" were such that this force was elevated to the status of a Legion itself, and they became the 20th - and final - of the Space Marine Legions. One of many decisions the Emperor would likely come to regret...

The last Legion established, but taking the name "Alpha", is a contradiction action that fits well with how the Alpha Legion rolls.  Where the other Legions strive in the shadow of their elaborate histories to pursue greater causes and honour their ponderous histories, the Alphas just seem to be trolling the galaxy.  The Alpha Legion is all about wheels-within-wheels, schemes, plotting, subversion, spying...like a Space Marine Legion-sized version of the CIA, complete with its own military industrial complex to sustain its machinations. They can do all of the standard, scary, appear-in-orbit-and-destroy-your-world Space Marine stuff.  But before they would bother, they will probably have wrecked on the pension funds, crashed the property markets, illegally seized the leases for resource extraction and rigged the elections.  If all that wasn't enough fun, then fine - orbital assault.

The Alphas built a galaxy-spanning network of informers, agents and contacts, even infiltrating the other Space Marine legions.  They spun endless webs of information and misinformation, mixing freely and spreading them widely. As such, they were disliked and distrusted by their brother Legions.


The outbreak of the Horus Heresy was almost a coincidence for the Alphas.  Although they sided with Horus in the Heresy, the Warmaster had difficulty controlling them.  The Alphas would interpret orders as liberally as they liked, and had so many schemes going they were just as likely to fight the rebels as the loyalists.  Their main operational motto is "no witnesses".  With a bunch like this, there are a lot of possibilities for fun scenarios!

The other reason I wanted to collect this force had to do with their colour scheme. They are often seen in a blue, or blue green, with a metallic sheen, the colour of a sports car.  The downside to this cool look is that it almost always seems to involve an airbrush, a general deal-breaker for me. I tried for a couple months before the Challenge started to find a way to come up with that cool metallic blue without an airbrush, but just couldn't make it work.  So I came up with a different blue-green approach - it's not a cool, metallic-looking finish, but I'm still pretty pleased with how it is turning out and there is no airbrush involved.


These models were a ton of fun to paint.  They are a mix of plastics from the "Betrayal at Calth" box set, with some upgraded bits from Forge World, and some resin Mark VI power armour marines from Forge World.  The Chaplain is the "Kurtha Sedd" plastic figure from the "Betrayal at Calth" box set, painted to be an officer/command figure for the Alpha Legion.

This submission has 11 28mm infantry models, but two of the models were test paints from before the Challenge so they don't count, so this should net me another 45 points.  See you with more next week!

Great additions to your 30k collection Greg, I'm sure they will continue to sow distrust and heresy on your gaming table with skill and panache!  Your blue-green colour scheme looks very good indeed.
45 well earned points!

From Barks- Prepare your troops for a surface attack! (102 Points)

Greetings, challengers! I feel a little bit slow off the starting blocks, but here is my first post, and a harbinger of more to come.

These are boardgame pieces for Fantasy Flight Games' Star Wars: Rebellion, which I hope to play once I have painted it all! A good project for the challenge.
A mix of scales- I throw myself on the mercy of the minions to calculate points! The AT-AT is about 30mm tall (1:700ish), the AT-STs a tad over 20mm (1:500ish), and the troopers about 15mm.

The bases (triangular/ circular/ square) have symbolic value within the game.

The Force is Strong with this first entry Barks!  A great force to menace any Rebel scum in your path. Don't worry about the slow start, we all know that the Imperials didn't well until Hoth anyway :-)

Thats netted you a total 102 points for your Imperial Sector - 60 for the Stormtroopers (15mm infantry) and we costed up the AT-ATs and AT-STs as 10mm vehicles.  "Pray we don't alter the deal any further..." 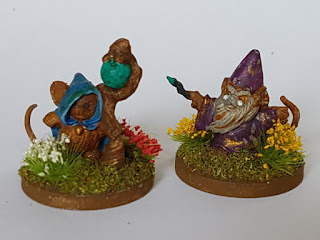 Everybody at home calls me a mouseling, so for my first challenge I decided to paint some mice. They are a 28mm witch and a wizard made by Reaper Bones. I chose to make the wizard's eyes gold because he is casting a spell and when he casts a spell he glows. 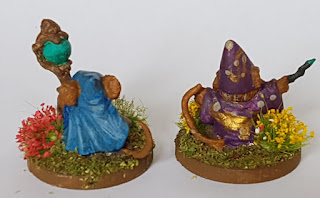 What a wonderful first entry Rosie- welcome to the Challenge!  You've done a fantastic job with your Mouselings and I really like the way you have put highlights and patterns on their cloaks.  The flowers on their bases are a nice touch too.

Hi everyone, this is my first time in the painting challenge and my first post. So for my first submission, I painted 12 Army of the Dead figures from the Lord of the Rings. I believe these guys were sculpted by the Perry's or by the Prime Minister, based on the 'PM' on the foot tabs. I plan on using them for a Dragon Rampant force at some point in the future, or just for looking cool in my growing Undead Collection. 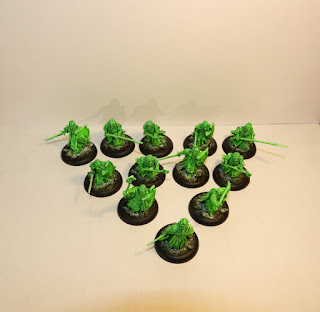 The boys from the top in a classic wedge formation. 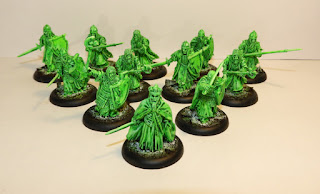 A bit of a close up of all the guys. 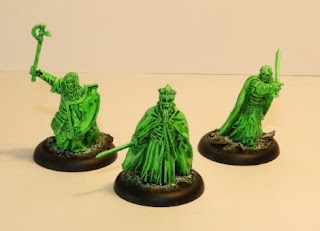 Super serious going to mess you up shot.

The paints I used were Vallejo Fluro Green, Fluro Yellow, and White, as well as Citadel Green Ink for the figures. For the basing, I used run of the mill sand and small bits of cork for rocks and then inked them with the Citadel Mahogany ink. Then I dry brushed around the ghost for some spooky glowing ectoplasm with Citadel Snot Green and then over the top of that closer to the models with the Vallejo White. I finished it all off with a Satin Varnish and the Army Painter Anti-Shine Spray.

I quite like the way they turned out, although I think I went a bit heavy with the dry brush for the glow effects. I do plan on doing more ghosts in the future to match these guys so I'll take this as a valuable learning experience. Also, thanks to Phill K for the setup and taking these photos. Next up, I plan to have a small bunch of Napoleonics based up for Sharpe Practice. Wish me luck!

Welcome to the Challenge Isobel! These ghosts are so realistically green and moist looking they had me reaching for my hanky. You have done a great job with a limited palette to make these ghosts look suitably glowy and spooky. Just lovely, and the final photo is quite intimidating. I'm looking forward to seeing what you do with Napoleonics, and also to see more of your undead figures. 60 points for you!  (Alan and Paul).
Posted by Unknown at 3:19 am 24 comments 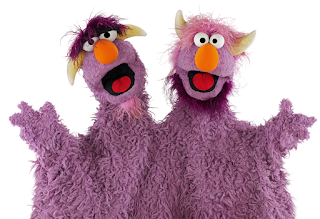 Greetings from the Two-Headed Tuesday Monstrous Minion, otherwise known as Alan and Paul. Paul is the one on the right with the beard. Alan has the droopy horns. We will be guiding you through the Tuesday submissions with all the professionalism, acuity and je ne sais quoi our photo suggests.