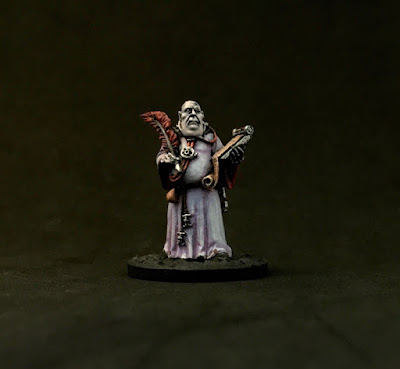 This 'Tribute' figure is for my great friend Greg - our hockey-loving, plastic-hating, crayon-snapping though highly entertaining Friday adjudicator.


To be honest, I'm usually okay with plastics, and not so wild about hockey (that is actually a Stanley Cup sized understatement), but Greg and I do share a deep affection of the original 40K 'Rogue Trader' universe of the late 80s and early 90s. To us (and I imagine many like us, who were teenagers at that time), there was something deeply compelling about the creepily dystopian vision created by Rick Priestly and backed-up by the wonderfully disturbing art of John Blanche.

At this time 40K was still a fresh and largely undiscovered genre. Games Workshop was basically led by hippies, and had not yet become the Kafkaesque corporate nightmare which now weirdly mimics the fictional dark Imperium it created. In those early days very little of the 40K universe was explained; so much being shrouded in shadow, mystery and completely open to conjecture. This, in turn, created a fevered playground of creativity, which allowed players to fill in the blanks with our own imaginations, where we were actually encouraged to use surrogate figures, bodged vehicles and sometimes devising our own rules. Of course, the reviled point-driven tournament system killed all this, but for a brief time there was an amazingly fun, dark universe called 40K...


Anyway, I blather. Suffice it to say that many of us have grown perversely nostalgic and guardedly paternalistic about the 'early' Imperium of Man and its host of foes. 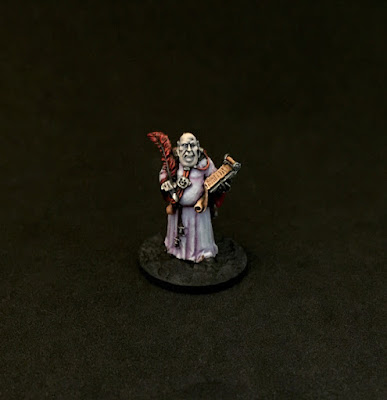 With this in mind I am happy to present this figure of an Imperial Scribe to Greg. Some may know that I work in the archival profession and so I thought It apropos that Greg receive from me a phlegmatic, self-important civil servant to add to his impressive 40K collection. I figure that somebody has to keep these rivet-headed, gene-tweaked Space Marines in conformity with the infallible Imperial creed and its catechism of organizational perfection - so he's the man to do it. 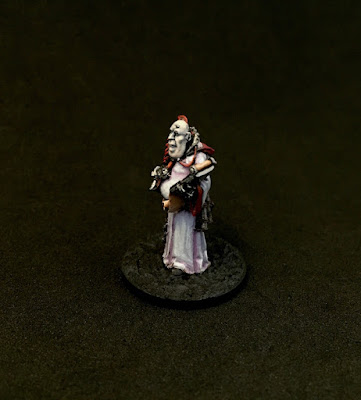 Being an archivist I am ashamed to say I have absolutely no provenance backing up this figure other than knowing it's a GW figure and it's at least 12 years old. Nonetheless, it's a great model and think it's as iconic to the 40K universe at the Space Marines themselves. 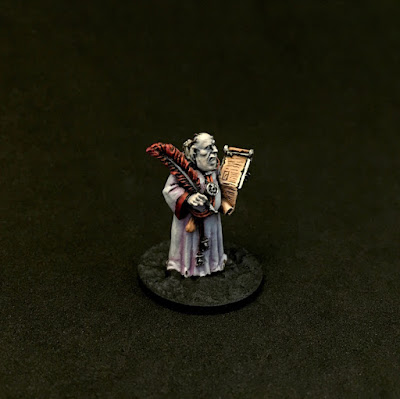 Greg likes to portray himself as a meat-and-potatoes painter (which many will smile at when you look at his amazing brushwork), and so he often smirks at 'fancy' paint techniques like non-metallic metals, zenithal highlighting, and modulated shading. Accordingly, I broke from my regular trope of 'kabuki style' painting and tried my hand at gradated blending, multi-hued glazes and I even went so far as painting the freakin' eyes! Well, I'm happy to report that I've been cured of any of further pretensions of artisanal skills and skip gleefully back to Greg's camp of curmudgeonly brush Luddites! :) 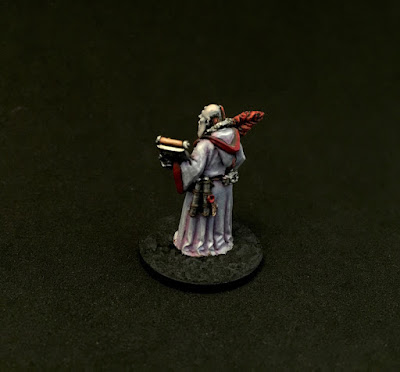 I hope you like him Greg! Again, thanks so much for helping out this year - I couldn't have done it without you.

Not being someone known for his resilience when it comes to new shiny toys, the moment I saw the new Team Yankee stuff on the web, I knew I'd to get my hands on it at some point. Surprisingly, I managed to hold on until Tactica, but by then my resolve finally crumbled and I virtually threw my  cash at the fine people selling my newest object of desire.

As Bundeswehr will only be released later this year I first went for a soviet mechanised platoon. As addiction dictates and getting a bit carried away by my excitement, I forgot to buy their means of transport but instead acquired a whole company worth of T-72's. I'll probably never actually be able to field these in a single game. Only later was I to realise my 'little' mistake but at that time all available BMP's and other means of dapper transport for these fellows were already gone. No big deal though, as I need another squad to round out the platoon anyway. Looking at the platoon commander below I don't think it hurts these guys too much to be degraded to footsloggers for the time being. Seems like catering with the red army wasn't that bad after all. 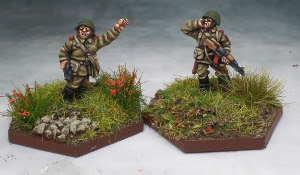 Not being a big fan of the Flames of War rules I instead decided to go with the 'Cold War Gone Hot' supplement for Force on Force. Having enjoyed some games pitching regular versus irregular troops I'm rather curious to see how the game system copes with regular forces fighting it out against each other.

Both platoons comprise of a NCO with Ak-74, one guy with the infamous RPG 7, two with RPK light machine gun and three other fellows sporting AK 74's of whom one is also carrying a RPG-18 disposable anti-tank rocket launcher.

The figures are quite nice and painted up rather well, but the casting quality is a bit of a disappointment. Some miniatures suffered from huge amounts of flash and mould lines while others were disfigured by misaligned moulds. For the price Battlefront are asking for I'd expect a better quality control. For the next figures I'd maybe give Khurasan a try, if only shipping and customs weren't that disproportionate from the states. 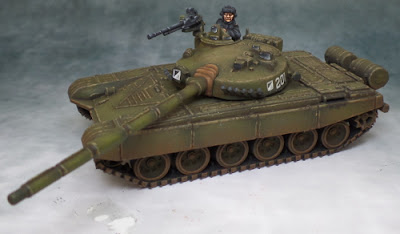 I'm no expert on soviet armour but the plastic T-72 clearly is an improvement on the Shermans that came with the first FoW Open Fire starter set. Not quite happy with the colour (it's too green if you get my meaning) but our very own GregB already sent me his recipe for painting soviet armour. Thanks mate!

The box comes complete with decals and a set of plastic tank commanders which are quite nice. 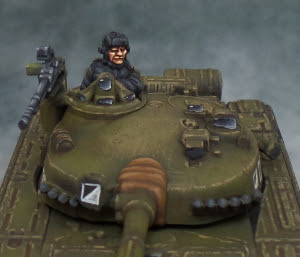 16 foot figures, one tank and a half figure in 15mm should net me another 39 points. That's 574 points for the challenge and 499 points for the side duel.


As I pointed out in a previous post I'm away with work for the week ahead and probably won't get any more painting done in the meantime. So all that's left for me to do is to admit defeat to my good friend ChrisS. Well done Chris. I tip my hat to you Sir! Just let me know what figure you want me to paint for you.


As this will be my last post for this years challenge I've included the, by now, obligatory group shot. Even considering the missing Winter GI's and Halftrack, which are by now safe in g'old Great Britain, I'm definitely not disappointed by what I achieved during the last few weeks. Especially considering the limited time during the first month. 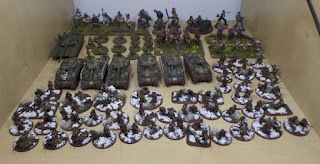 Now I feel it's time for a few last parting words. First of all I want to thank our beloved Mr. Snowman Snowlord for organising the challenge once again. As always it was a pleasure to be part of this hobby spectacle par excellence. My admiration also goes to Mrs. Sarah for enduring all this year after year on end. Of course we won't forget our trusty minions who, despite me being under direct administration of THE man himself, I dare to say made a fantastic job. I always enjoyed your good humoured comments. And last but not least my heart felt thanks to all my fellow participants for some excellent weeks. It was a pleasure!

Greg, Byron and I were just playing with his excellent 'Team Yankee' collection the other night (LOVE those Hinds) and Greg had mentioned that you were jumping in on the bandwagon, so I'm delighted to see your stuff here this week. Again, your 15mm infantry is so excellent that they look like 28s - it's just amazing. The T72 is excellent as well and I particularly like the commander and the HMG done up in a very convincing NMM.

Finally, thank you for your kind words of thanks to me and the crew of the Challenge. It's very much appreciated but our work has been aided by the enthusiasm and good-will of you along with all of the Challenge participants.

The final run in, and time to present my Curtgeld for this Challenge. I wanted to present something to Curt related to our shared interest in the Spanish Civil War, as that's what I've been painting for most of the past year, and Curt's own collection has been a great inspiration. So here's my rendition of Eric Blair, better known by his pen name George Orwell, from his time serving in the Spanish Civil War. 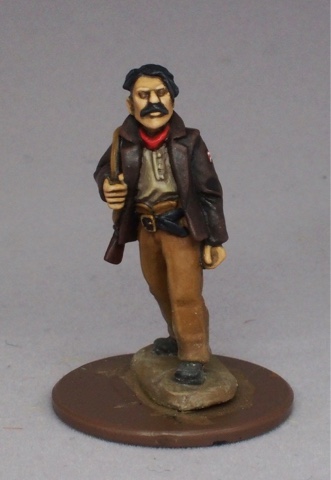 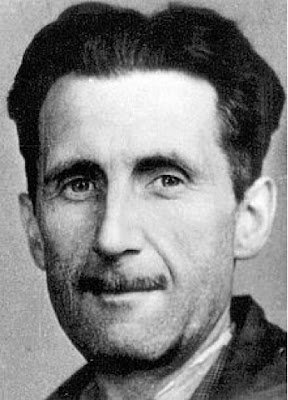 In December 1936, Blair, a democratic socialist and staunch anti-fascist, set out for Spain to fight for the Republicans. Entering Catalonia from France, he encountered the conflicting factions supporting the government in Barcalona, and joined The Worker's Party of Marxist Unification - POUM. Sent to the quiet Aragon Front, he initially saw little action, but deprivations visited on the loyalists from lack of supplies. Having recnently married, his wife Eileen O'Shaughnessy visited him there. 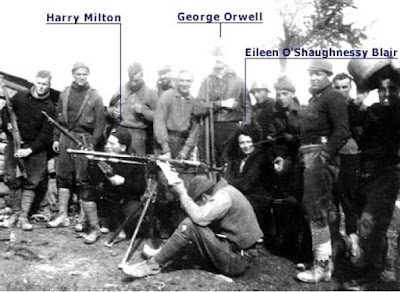 He traveled to Madrid, intending to join the Communist party's International Brigades. There he was appalled at the factionalism dogging the Republican cause and denunciations of POUM from the Communist press, and resolved to return to Catalonia instead. Back at the front, he was wounded in the neck by a sniper and ruled medically unfit to serve longer. Blair being 6'2" was probably a factor, you can identify him in the photo below by standing a head taller than his comrades. By June, POUM had been outlawed as a "fascist" organisation that hindered the Republican cause, and as its members were arrested and put on trial, Blair fled to France and then back to England. 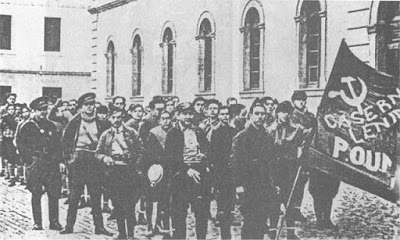 So why a "gambler, daredevil or risk-taker"? Well, I thought as a published author, setting aside his burgeoning career to participate in an unpopular foreign conflict for his beliefs was quite a colossal gamble. And actively seeking combat to fight for what he believed in was undoubtedly risky - while he later wrote about the conflict, he didn't travel to Spain as a journalist. 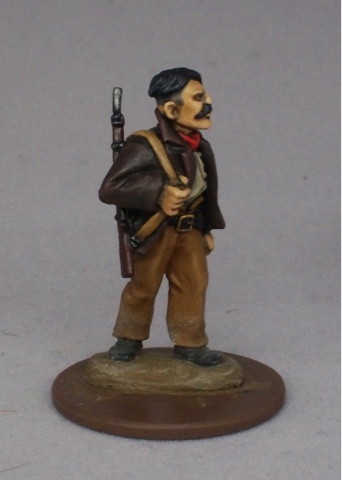 I painted him as best I could to fit in with Curt's existing SCW collection, choosing appropriate colours as best I could and using more subtle skin tone to my usual. The base is left bare for Curt to match. I couldn't resist giving him a patch showing his allegiance to POUM, a white hammer and sickle on red. 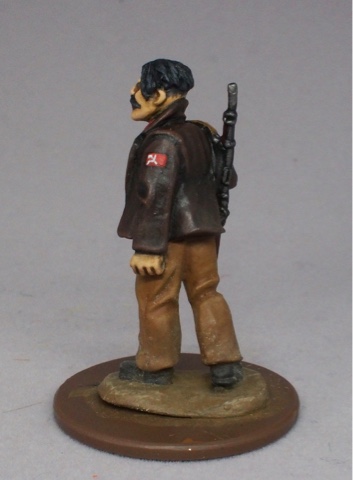 I hope you like this small token Curt, and deepest thanks for putting on this winter extravaganza of painting once again. And thanks to all those that have offered their time, enthusiasm and humour to help out this year.

Oh wow, this is absolutely lovely Phil. I've not done any of the 'celebrities' of the Spanish Civil war and so it's such a treat to get one from a fellow SCW aficionado. I had to laugh aloud when I read, 'I painted him as best I could to fit in with Curt's existing SCW collection, choosing appropriate colours as best I could and using more subtle skin tone to my usual.' This figure, with it's patented 'Smooth-Hand-Phil' paintjob will stand out like a sore thumb amidst my rough-and-ready paint style. That being said, you won't see me complaining!! Thanks so much Phil! 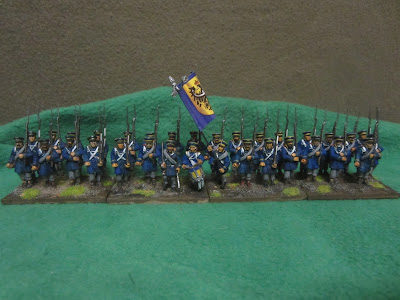 I love to paint quickly. I feel joy from the fact that miniatures appear eyes, and they see the world, and not lay pieces of plastic in the box. But this squad I painted month, and tired of waiting, when I can finish it. And then, finally, I finished it. 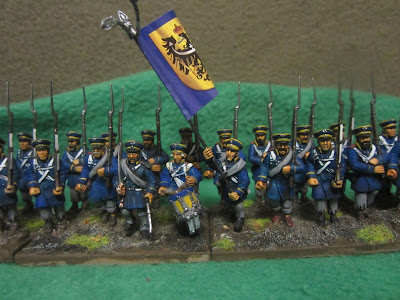 I wanted to make this battalion was a militia - they must have been in a dirty, shabby shape, tired and hungry, but going into battle against your enemy. 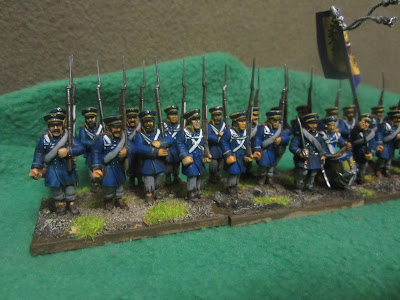 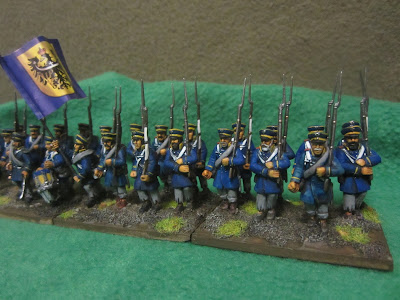 Ahh, these look terrific Alex! I'm not a big fan of these particular Warlord sculpts as the hands seem huge to me, but this all seems to disappear when they're painted this well and all ranked up. Speaking of which, I also like how you've varied the ranks to give the unit a more irregular, conscript feel to it.