Today I'd thought I'd bring you another 20mm unit, this is my rendition of the British 10th Regiment of Horse or Mordaunts Dragoons. 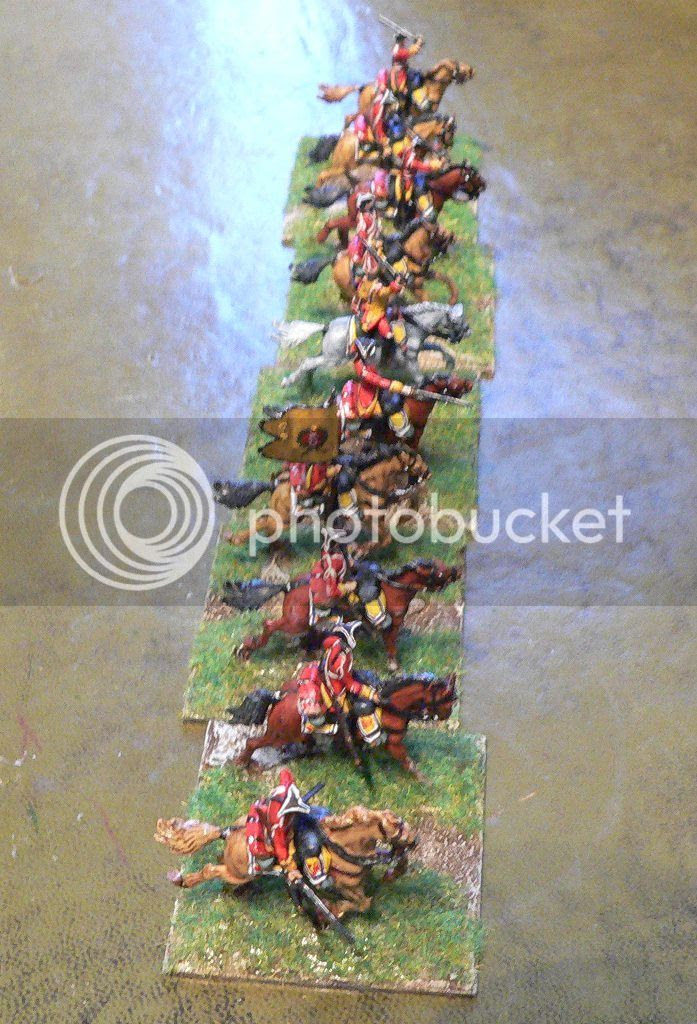 This regiment was part of the cavalry of the second line of the Allied army at the battle of Minden in 1759. The uniform detail as well as the background was obtained from the excellent Kronoskav site I've mentioned before. 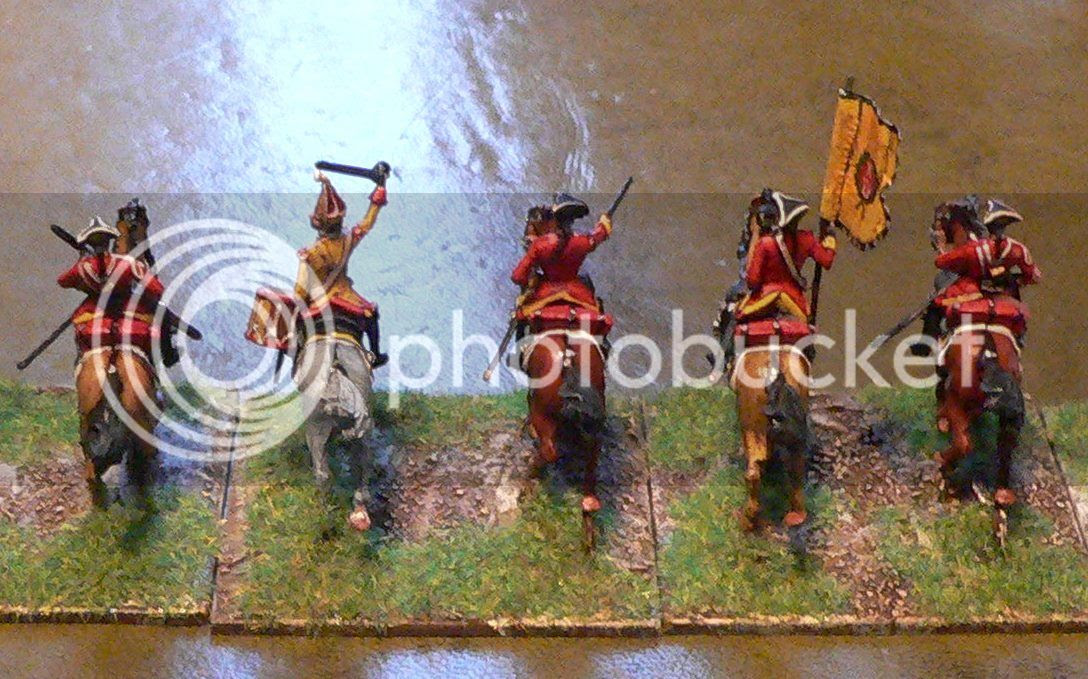 Ever since deciding to dive into the 7YW, I  wanted to paint units with a distinctive background and within coherent larger entities like brigades or divisions. 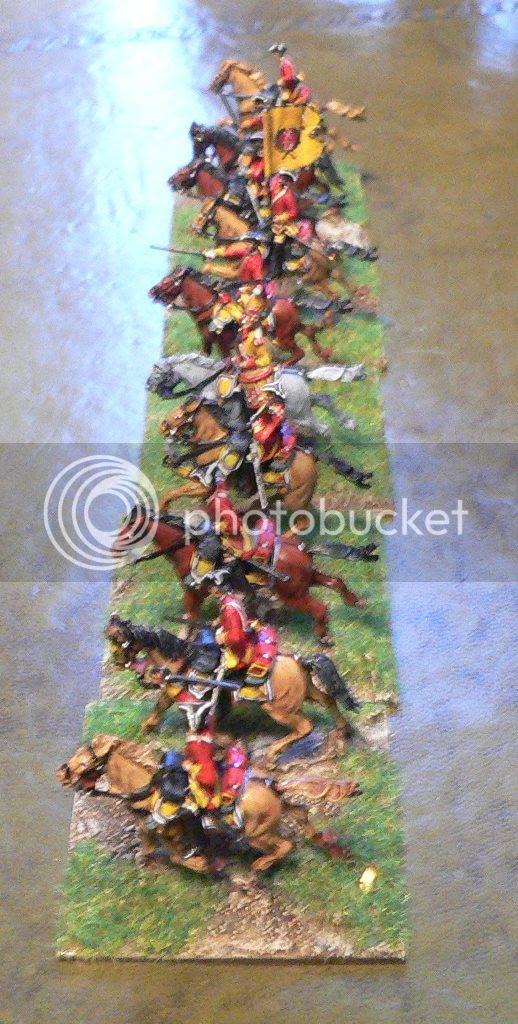 I have already painted the 3rd Dragoon Guards and still have the Greys to do. I am still in doubt whether to paint the Hanoverians for the "line" as well since this was not originally part of my plan. 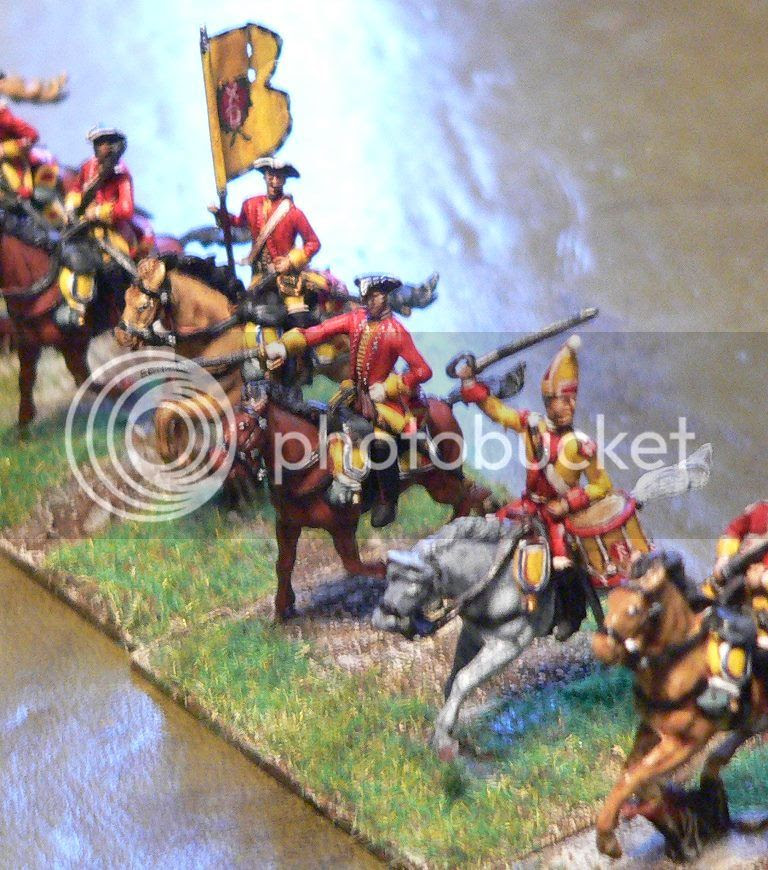 This is a unit of 10 mounted men and if I am not mistaken should amount to 80 points in total.

As so many have done already, I also include a picture of my study/ man cave ;-) 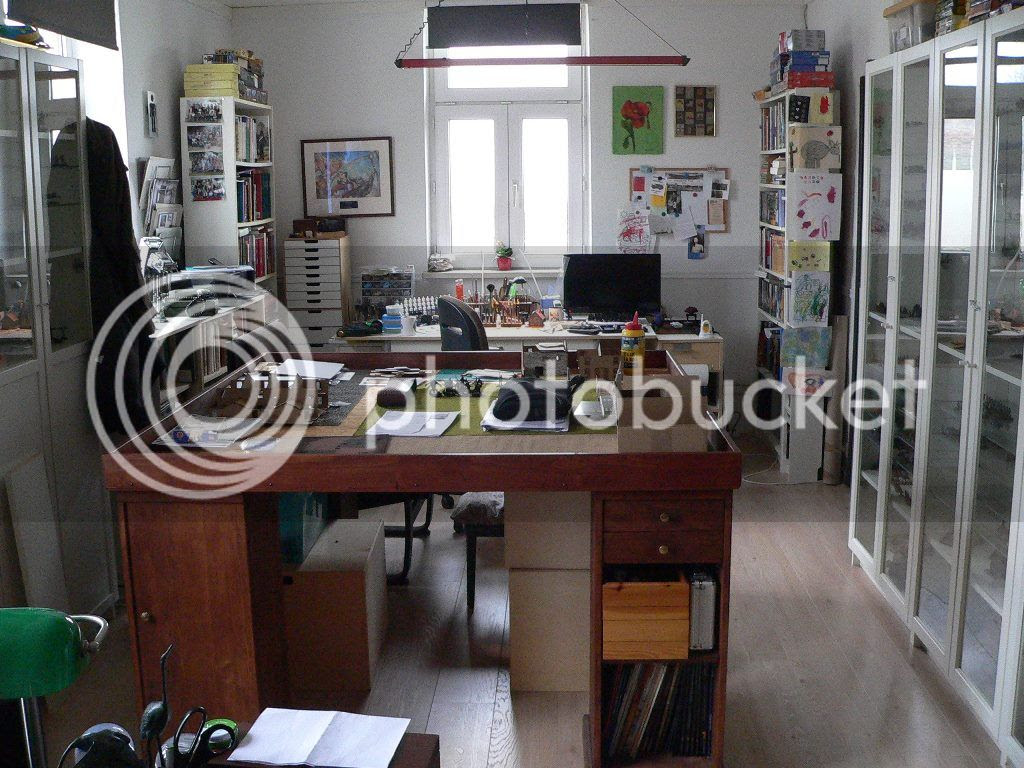 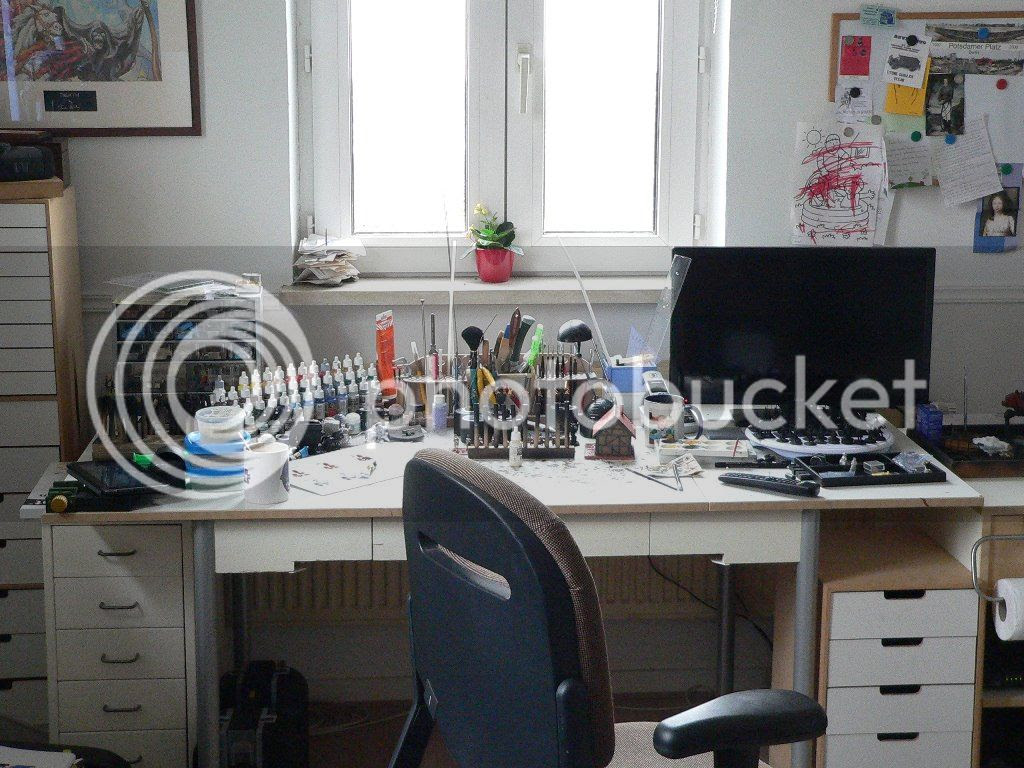 Wonderful work on this unit Sander. The paintwork is clean and vibrant with the uniforms but I find the horses look especially fine.  Lovely work.

And speaking of lovely, I really like the layout of your study - it's very bright and well organized (and a veritable advertisement for IKEA!). Looking at your room makes me think of our recent trip to Holland (good memories)!

To follow on from last week, here I'll present seven more bases of the 10mm Pendraken Miniatures Sci-Fi zombies (not to be confused with their Fantasy zombies, you see).

As last time they're based two to a base and on 20mm octagonals, to help differentiate them from the singular, round based survivors (when I get around to painting them).

I've been more adventurous this week, in painting more complex fashionable designs on some of the clothing, as well as attempting some 'fashion' camouflaged material.

Here's two shots of the Horde, so far

Five more bases to go of 'human' zombies and then six bases of undead canines. Work has begun on the lucky / unlucky survivors - six of which I've been converting using modelling putty and florist's wire - and there's a mail order near-ready to be made for more miniatures to expand the project ... And I foolishly said that it would be a one-purchase and then finished project :)

ps. If I say it here then it might just motivate me to finish the Curtgeld figure that's sitting on my paint desk. 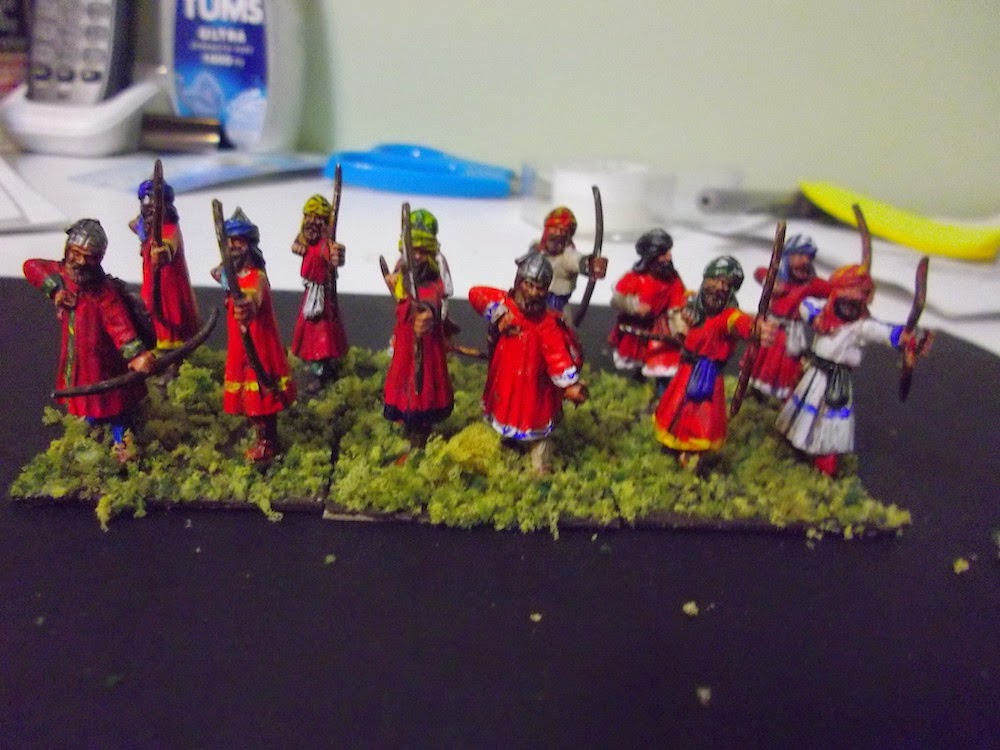 So in between singing sea shanties and rinsing the salt from my shorts (see the comments on Miles’ earlier post), I have completed a unit of 12 Andalusian archers for my El Cid era armies.  These are Gripping Beast figures and are old friends.  Others seem to have issues with some Beastie Boys figs, but I like theses ones.  The one slight quibble is the bows are trick to attach to some figures.  However, good poses and clothing and they paint up nicely IMHO. 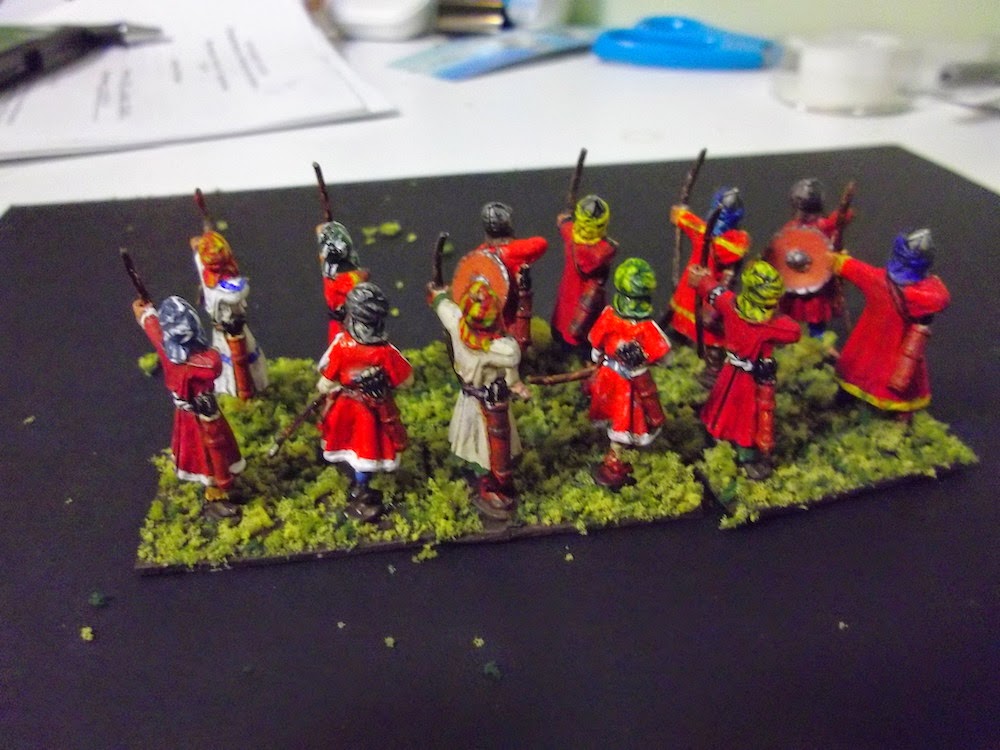 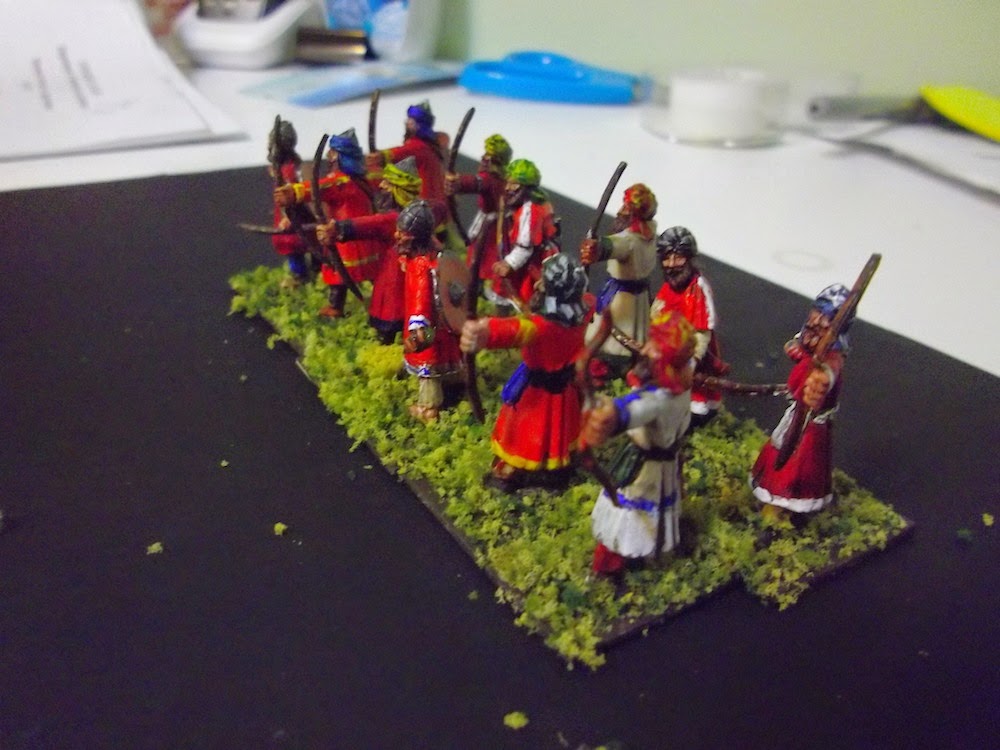 Over time I have waffled between giving my Ancient/Medieval units “uniforms”, sometimes opting for a Heinz 57 variety and others going for common clothes.  For recent units I am tending to unit “theme” colours, such as the red theme for these archers.  I’ve used three different shades for the tunics, or neutrals with red turbans.  On the theme I can vary to trims, sashes and turbans and accessories.   It may not be historical, but it makes the units far easier to group together during set up and take down. 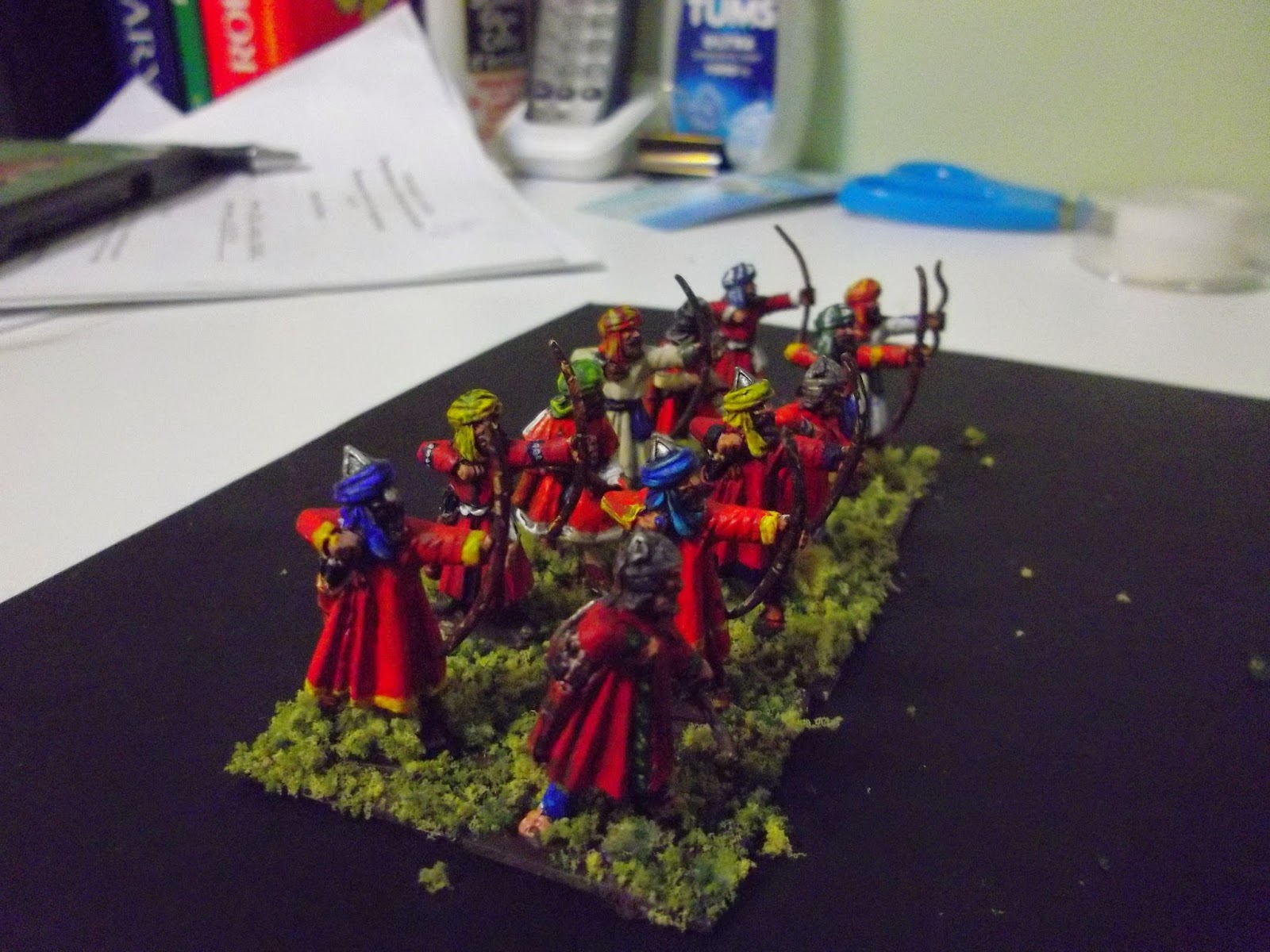 Great work Peter! I really like the vibrant red 'theme' to these archers (especially with the light green turbans) and you're right they will be much easier to identify as a unit on the tabletop.

I'm getting ahead albeit rather slowly. After placing third (and only a point away from being tied for first!!) in the largest winter time Flames of War tournament  here and being picked into the preliminary roster of the Finnish team for European Team Championships I had a sudden burst of inspiration to paint up some more tiny Germans.  Unfortunately the rush of inspiration has been hindered a bit by the better half being away on business for some weeks and I've had to stay home alone with our little beast which has caused painting time to be at the premium. 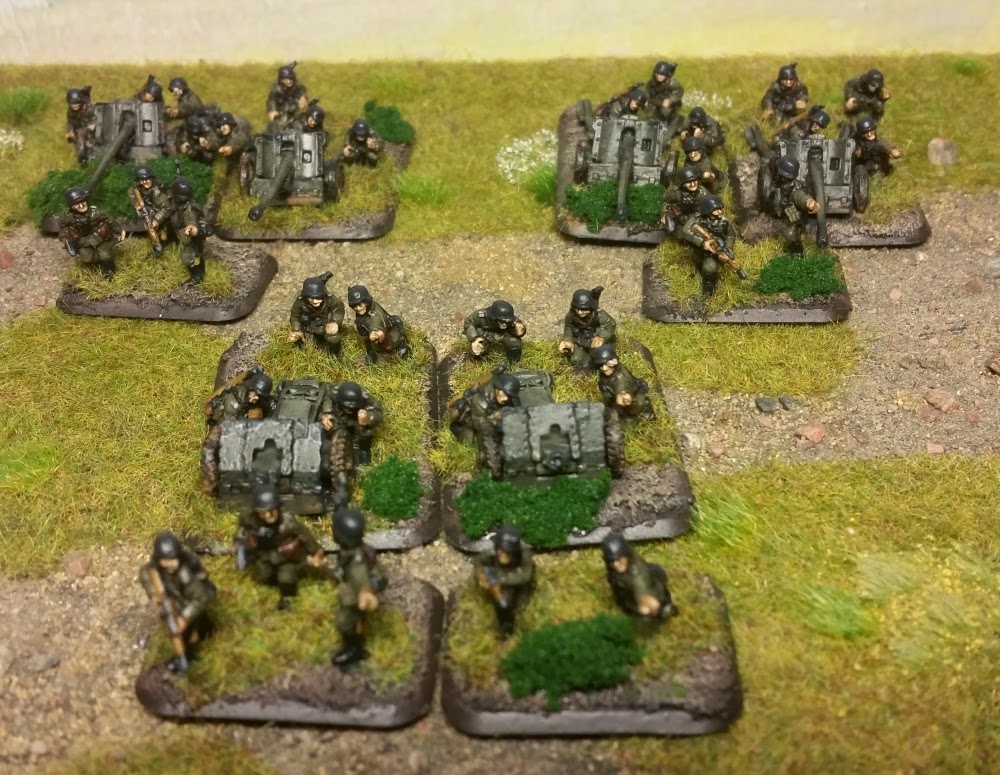 Still I've been managing to get some painting done during the little boys naptimes and can now boast 3 more finished Flames of War platoons. One light infantry gun platoon of 2 le.IG18 guns and 2 platoons of 2 PaK38's. These will provide fire support when on the defense and help with some much needed anti-tank power.

I added some chipping and mud on the guns to make them look like they've seen some action as befits the Veteran rating of Germans in Barbarossa. Simple basing with static grass and also some bushes. My local shop finally had a resupply of scenery materials and I picked up some clump foliage that I'd run out off. I added some to these guys and also went back to the previous German entries and added more undergrowth to the bases of the Panzerschützen as well.

With these done there are only 3 platoons left in my Early War German project. Two of them are fairly small with only a few stands, but I've still got one very large Pioneer platoon with all their vehicles left. There's also a Bolt Action theme day coming up at my club and I've promised to hold a Commando inspired scenario which needs some hapless Jerries standing guard and evil Nazi scientists so I think there next entries will be various shades of Grey as well. Scale is still open to bursts of inspiration though as there is both 15mm and 28mm prepped on the desk at the moment :)

First, congratulations on your top tier placing in the FoW tournament and your selection to the national team. That is very exciting! Where are the European Team Championships being held?

These look great Samuli - I've always liked the look of that snub-nosed infantry gun and, as you say, the PaK38s will give you some good anti-tank capability, especially in the early war. The clump foliage adds a nice bit of texture to the bases. Well done.