Reminder: The Deadline for the 'Armour' Theme Round is Midnight Saturday 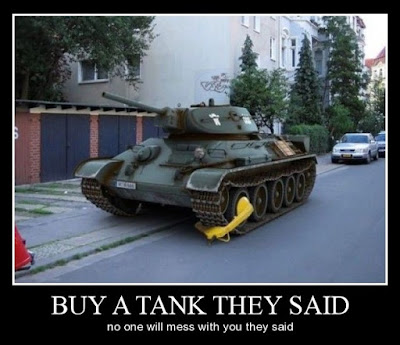 The title says it all.

If you want to participate in the 'Armour' theme round please get your entries done and sent in to me by midnight Saturday. You can either post it on the blog (labeled something like: 'Armour Theme') or send it to me by email.

Side Duels and Challenges Updated 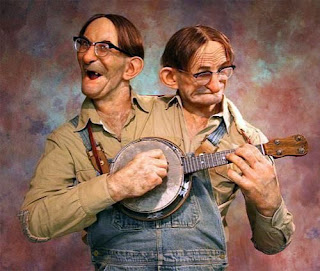 The second points update for the Side Duels and Challenges has been posted.

AlexS has roared across the line in first place in the first to 1000 points bragging rights. Well done Alex! A few other Challengers have made statements of intent in their various side duels, not least EvanH who is kicking my @sss all over the park in our Frostgrave duel.

Please check and confirm I have things right!

Late comer to the challenge as some domestic family issues have altered my painting schedule on Christmas. In any case here I present my first  contribution to the Challenge in the form of two Portuguese Napoleonic infantry units that will swell the ranks of the Allied armies in the Peninsula. 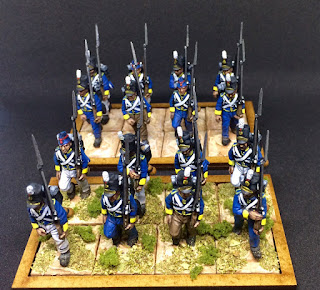 They've been painted as part of the 21st Infantry Regiment.

The models are 28mm plastics from Warlord games. Although not as superb as the Perry plastic range, they show nice sculpting and detail, making them easy to paint. I expect to present next week another two units including the command base with the drummer and colours.

As an aside, I'm testing this year a cheap light box for the photogrpahs that I acquired from Amazon for the whooping price of €8.0. This is a foldable model with a led-light powered by any standard external battery pack for your mobile. 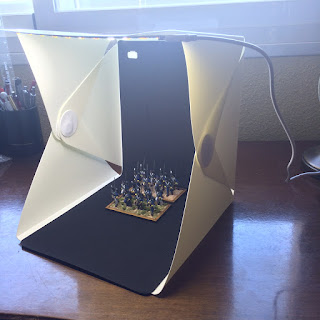 A total of 16 models makes 80 points. Please also credit my account in the Sharp Practice duel.
Welcome to the fray, Benito! A smashing first entry with these blue clad Portuguese.
They look very fine for their part in the Allied Army. Hopefully they have skirmishers guarding the flanks from Ole Bonnie Dragoons! ;)

Continuing from my last Challenge post, here are the rest of the Vendel fantasy barbarians I will be using to represent the Wild Men of Dunland in my Lord of the Rings project.  This final batch of 22 figures includes:

Four archers.  The chaps dressed as teddy bears are adorable.  They can only don the fur after they have killed their first Ewok in hand to hand combat.

Eleven spearmen.   While most of the shields are sculpted as hide, I chose to paint the metal ones as bearing the White Hand of Saruman.  Perhaps Saruman's quartermasters have been equipping some of the Dunlendings from the arsenals of Isengard.

Stab for Saruman!  As I envision things, the Dunlendings would stay in their hills and wilds, only coming out to raid exposed Rohirrim settlements for plunder.   They wouldn't want to engage the Riders in the open, but if they had to, having a lot of spears wouldn't be a bad thing.

However, all spears makes for a dull barbarian horde.   I decided to outfit these next six chaps with GW orc swords from the bits box, though one fellow gets an axe from a Gripping Beast sprue.  There's also a fellow with a horn to go with the command group.

I tended to use a variety of yellow, yellow ochre, and reds for the hair, on the theory that the Dunlendings are ethnically similar to the Rohirrim, whom the orcs in TT call "straw hairs" but obviously the Dunlendings never developed as a civilization like the Rohirrim.

The full 22 figures.   While there's not a lot of detail to pick out, the project took some time because I wanted them to have a motley, scruffy look to them, with some varieties in hair, furs, etc, which took some thought and effort.  It was a lot like painting ACW Confederate infantry.

I have two more personality figures to finish as the leaders.  Both are from Heresy Miniatures in the UK and are quite lovely.  I hope to show them off in next week's Challenge post. 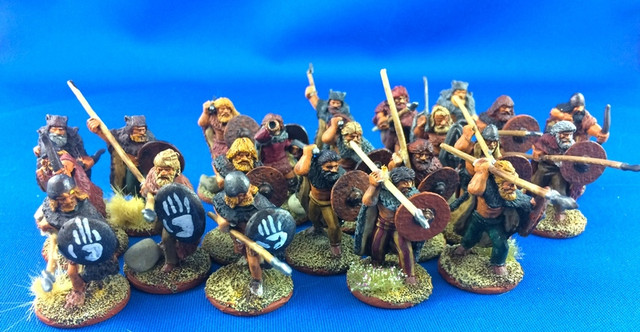 22 X 28mm foot figures at 5 points each should give me 110 points.  Tomorrow the leave beard comes off, the uniform goes on and it's back to work, so my output may slow now.

Thank you looking.  Blessings to your brushes!

Very fine work on the proxy Dunlendings, Padre!  They do fit the scruffy look very well and most certainly have the wild look down. My favorites are the striped trouser fellows who add even extra character. The white hand symbol just cements their loyalties!
Posted by Mad Padre at 10:00 am 36 comments

These five 28mm metal models of Terminator Robots are manufactured by “Copplestone Castings” and can be bought as code FW15 from their Future Wars range. A robotic assassin and soldier, designed by the military supercomputer Skynet for infiltration and combat duty, these miniatures are clearly highly influenced by the 1984 film "The Terminator".
The figures were initially primed using "Citadel" Chaos Black and subsequently given a double layer of Ironbreaker. They were then heavily washed with Nuln Oil and dry-brushed with more Ironbreaker. As the models were predominantly metallic silver in colour I decided to try and break up this monotonous appearance by 'picking out' their automatic weapons with Chaos Black. These rifles were then highlighted with "Vallejo" Heavy Charocal, washed with "Citadel" Nuln Oil and then finally, had an L.E.D. painted on them using a combination of "Vallejo" Heavy Red and "Citadel" Carroburg Crimson.
To be honest I had hoped these particular models would be a relatively pain-free painting experience. But I actually found their sculpts a little questionable around their firearms, particularly underneath their arms where it wasn't very clear whether I was looking at part of the weapon, part of the arm or torso, or just a lump of metal where there should be a space. As a result I spent a good while repeatedly shading certain parts of these figures to try and give the illusion of shadow around their automatic rifles.

Very nice work on the SkyNet Inc. Tin boys, Simon!  They do look very fine with the fine job you did on accenting their parts ( that sounds dirty) umm components!
I appreciate the red spot color which not only gives them life, but an ominous presence as well!
Posted by Blaxkleric at 7:00 am 33 comments 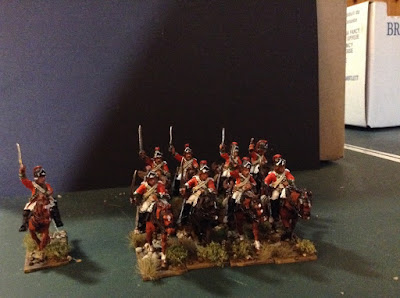 For my second entry I have a group of 9 British 15th Light Dragoons (or Elliot's Light Horse) from the Seven Years War.  These are the second of the three projects that I started on Boxing Day (that's December 26th for Yankees or St. Stephen's Day for the Irish).  The figures are Perry Miniatures from their AWI range and are lovely figures that I really enjoyed painting.  These will serve in my Sharp Practice British SYW force alongside Keith's Highlanders. 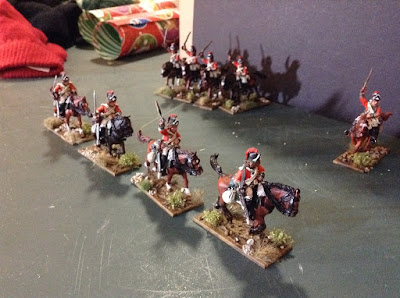 It seems that you can tell a Brit that he's a light cavalryman and dress him like a fop, but he'll still try to run over what ever is in his path.  The 15th was the first British Light Dragoon Regiment (raised in 1759) and set the tone early for this tendency.  Shipped to Germany they joined the polyglot Allied army on July 15, 1760 and fought at Emsdorf the very next day.  Elliott's did most of the fighting at Emsdorf, charging French Infantry twice and capturing an entire battalion. 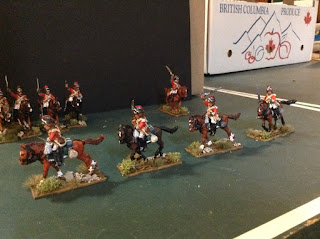 Enough history and back to the figures.  Again I am morphing AWI figures to serve in the SYW.  In this case, it doesn't seem that uniforms for light dragoons changed much between 1760 and 1776.  I checked with my goto source and got the following info on the SYW uniform (you could probably heat my fist pump as I read this).


We have not found any primary source describing the uniform of this regiment. Several part of our description are assumptions based on the uniforms of the regiments of dragoons.

I took this to read "we got nothing, do what ever looks right".  War-games fashion police might try to haul me on minor issues with shabraques, cuffs and shoulder straps to which I reply Pffffffffft! 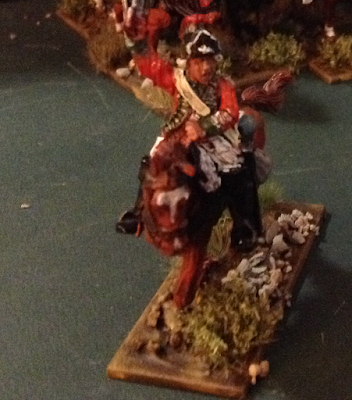 The figures themselves are excellent, a little beefier than other Perrys with good active poses, lovely detail and great horses.  They certainly look like hard campaigners with their carbine muzzles wrapped for protection and the well stuffed extra saddle bags of fodder and plunder. 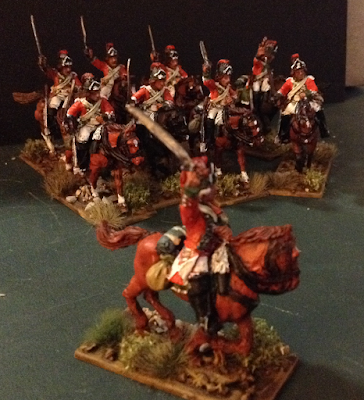 I didn't notice one bit of detail until I was finishing the figures.  There is a lovely plate embossed on front of the elegant helmets which picks out nicely with white paint.  However, the Perrys correctly sculpted these as 17th Light Dragoon, and therefore gave helmet the skull and crossbones emblem specific to that unit.  I tried to be selective in picking out the details in order to give the impression of the White Horse of Hanover instead. 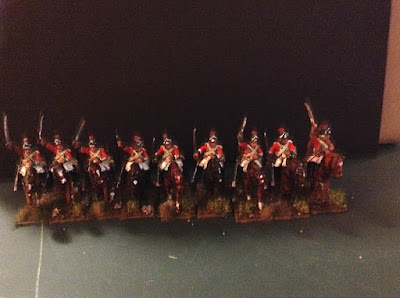 They look brilliant, Peter!
I rather like the jackets with the black facings, and you even picked out some gold trim on them too! They do have some very healthy horses too, I admit I'm a very big fan of the Perry Historical line and would have a lot more if my wife allowed me to. ;)
9 dragoons on galloping horses in 28mm is worth 90 pts, but I'll pip you up to 95 for the gold lace. I've a project lurking and paint splattered on my desk that is well outside my norm and comfort zone. Groups like this may make me a touch trepidatious, but are also great inspiration! ;)
Posted by Peter Douglas at 5:00 am 34 comments 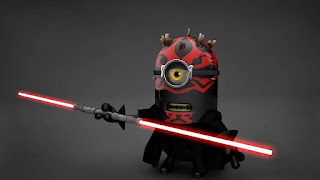 And so it begins,
Curt asked me to join the ranks of the minions and although I've been occupied with moving, training, school athletics with the children, the holidays, AND my own wish list of AHPC possible submissions...
I of course said yes!
I've been looking forward to the challenge all year and have a large tote filled with prepped models awaiting a brush. Since we've moving into a new home, I've even rescued my massive drafting table from it's former spot in an unheated garage to a now climate controlled basement where it is now groaning under the weight of the first wave of my own possible entries as well has hurriedly assembled holiday gifts and butterflies that need a quick airbrush prime. 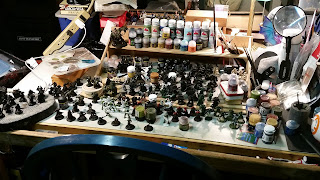 I really should just focus on one thing at a time!
Yet today is not about me, but about the stalwart guinea pigs  er, participants that have been enslaved. . (Strike that) assigned to Thursday.
I have been given access to an infernal spreadsheet of dubious nature that I am told will allow me to calculate the entries.
I'm a little foggy on the whole sacrifice part, but perhaps a yard bird from KFC or Popeyes will suffice.
I have also taken advantage of the blogger schedule to preload this as I have last minute training scheduled for Thursday.
I'm not a desk jockey sort, so I will be off running, exerting, and visiting ranges like a proper eyeball thumper.
Since this is for my civilian job and not the military ( that will be this weekend) I should have periodic downtime to enjoy coffee and wifi. I will also be home well before supper, so any issues can be resolved easier then.

Note: Any complaints about the service will be given a force slam or cake....that will entirely be dependent upon the quality and quantity of my coffee supply.   ;)

Now get those brushes to work!