From TeemuL: Odds and Ends and Chaos (plus the paralyzed Hobbits)

It is Tuesday and I haven't painted anything this week...

Happily I painted over 100 miniatures during the last three months, so I can take couple of days in relaxed mode. It helps, that I won a LotR game tonight, it was a tight game, but my elves beat the Mordor orcs.

The picture above shows all those painted miniatures (plus the paralyzed hobbits I missed from last year's photo). It has been fun, see you next year!
Posted by Teemu Laaksonen at 11:09 pm 13 comments

From DavidB: What...It's a wrap!? And off to vacation! 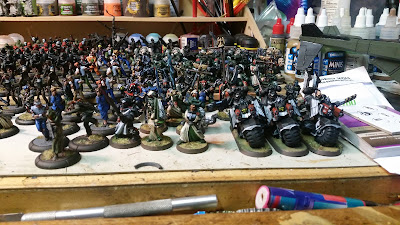 At least I had the foresight to gather the minis together and snap a few photos BEFORE I left to Adepticon!

Note that the rear ranks are populated with unfinished or untouched minis that would have gotten me to my planned total, but Murphy had it in for the old grunt this time out! ;) 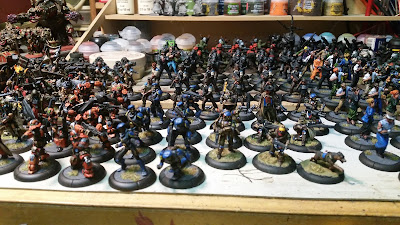 I'm most pleased that I completed the bulk of my MERCS and a fair amount of some other boxed games. (I notice now that I forgot the Imperial Assault stuff...) 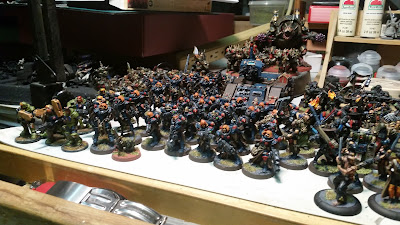 In addition to the box games the Soritas and Inquisition are taking the field which will make my Cadian 7th all the tougher, perhaps my ginger nuns can add some further punch to the Catachan Death World Vets too! 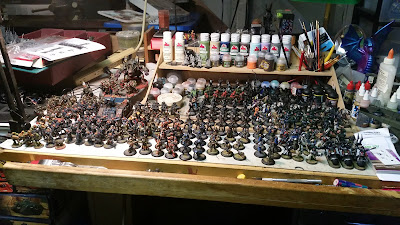 I'm mostly pleased that I was able to get my massive drawing table in the basement of my new for me home. I still haven't found the tracks and extras for the Soritas tanks, and I am missing still some valkyrie componets; however,  I did find Colonel Commissar Ibrahim Gaunt. He is still unassembled and in the blister but is going to be in the queue for next season.

I spent the 1st days of my vacation shifting boxes from the garage and breezeway( IOU Honey-do list) more stuff has been shifted to the mancave so I'm sure the missing components will be there. Then it will be the summer to tidy up and set up for next season's go.

I'll get some photos of myself and kid's with their work when I get back from Adepticon.  They had a lot of fun and were quite chuffed with the responses to their work, they were already plotting next year when I left.

Thank you again to Curt for tending the logistics and Command & Control, Thank you to Lady Sarah for allowing the rambunctious crew to intrude on what could be quiet winter months, thanks also to my fellow challengers who make this such a wonderful time spent in the hobby for the encouragement and vast amount of eyecandy! ;)

I've been around this fun winter event since my last deployment first as a spectator, then with Curt's prodding a participant. It has now evolved into a winter tradition in my home with the kids gathering around my table to work on their own minis or watch me. Since this is usually after a basketball game or wrestling match, it does get boisterous!

Now it is time for hardwork, training, yardwork, planting...but I'll still have the afterglow of hobby time to sustain me till next time! ;)

Email ThisBlogThis!Share to TwitterShare to FacebookShare to Pinterest
Labels: DavidB

So the Challenge has ended, so why am I looking at the figures on my paintdesk and immediately counting the amount of points they would get me? Oh well... Before the Challenge starts I prep the figures I want to paint and put them together in my gaming table. During the Challenge I think the coated figures out and add the painted figures back to the rest, thus I can see my progress and have them nicely gathered to make the final picture showing the painted results of the Challenge. Now my favourite part of the Challenge is: putting the painted figures in my showcases and completing their respective collections. I had already taken the picture of the total of painted miniatures and put them in the showcase when Curt asked for a picture of us with our figures. But since the reason for this photo is so that we all can put a face to a name, I thought it would be alright to show a picture of the figures and one of ... well... me. separately.

So here are the figures. 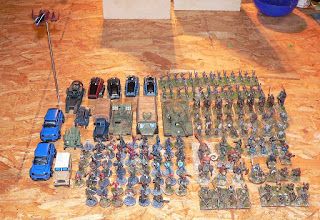 The majority of these figures are either Dark Age figures or part of my 80's Pulp Project with some sundry others thrown in for good measure. Now you must have noted, as I already pointed out, that I am not in this picture, luckily my wife came to the rescue. Normally I do not think my painting should impede on family time and I practise my hobby in the evenings when the boys are in bed and the wife is entrenched on the living-room couch. But this last week I asked her whether I could use the Saturday afternoon to get some stuff finished in order to reach the 1500 points needed. She kindly allowed me to do just that and I was joined by my eldest son Arthur who can be seen here while he is painted one of my old army-men-planes. 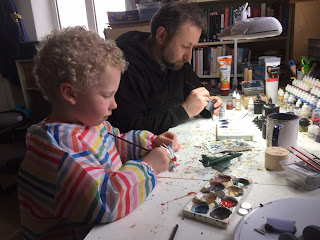 This surely was an awesome Challenge, it is my 3rd and if Curt wills it, not my last by a far! The highlights, in no particular order, were the Side Duel I held with Iannick, my participation in the Curtgeld with Stefan and Lord Awdry and me ending up in 3rd place in the East Theme Round.

In the end Iannick and I forgot to put up a post stating the outcome of our duel which is a draw, so we decided to each sent one another a figure and so it will happen. It was great, it was HUUUUGGGEE!

Ahem, well that leaves me with saying a great big thank you to all of you Challengers, Minions and of course the Snowlord and Lady Sarah for making this Feast of Figures possible for yet another year!

Email ThisBlogThis!Share to TwitterShare to FacebookShare to Pinterest
Labels: SanderS

From BenitoM - My very Napoleonic Challenge

The Challenge is over and also the long winter nights... welcome Spring (although here in Madrid has lasted just 1 day so far, tomorrow snow is expected in the ourskirts of the city). I must say that it has been a real pleasure to participate (second edition for me) and I think this is now a must for me in years to come (at least while Curt have enough sanity left to continue leading the project).

Following the tradition, here is the photo of my achievements this year which as you probably know were mainly focused on the Napoleonic period.

An embattled Portuguese infantry regiment forming square somewhere is the Iberian Peninsula,  defending against the brave French Hussars led by the Bravest of the Brave, Michel Ney, Marshall of France, Duc dÉlchigen and Prince de la Moskova... (and a Panther??) 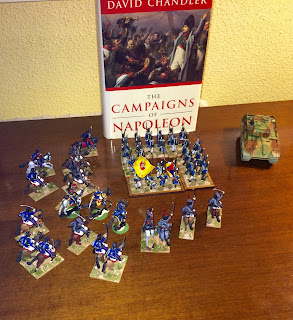 ... and in the back my latest bed-reading work over the past few months, Chandler's Campaigns of  Napoleon, a source of continue joy. A total of 430 points, short of my 500 points target but enough for me as I'm a slow painter and like to divide my time with reading and playing games (incidentaly, a lot of Command and Colors in recent times...)

What was left in store (a.k.a. the Pile of Shame)? Mostly II WW vehicles (Hanomag and Jeep) and infantry (German), a group of Portuguese Caçadores, some French leftovers from previous projects, my first Austrian Napoleonic unit (arriving too late to enter the competition) ... and the Curtgeld (which is now to priority in my painting schedule). 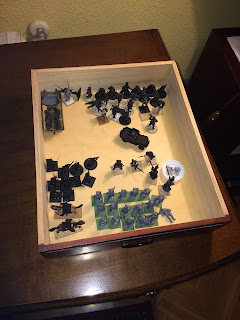 And of course the selfie! Last year I posted one in the Waterloo's Butte du Lion; and to keep with the tradition of attaching my image to significant military places, this year is in the landing fields close to Arnhem (a clue to a painting project for the next Challenge?) 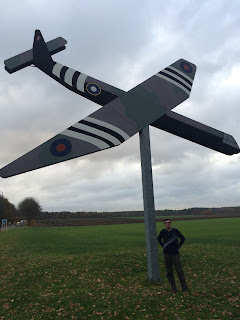 Many thanks to Curt, Sarah and the minions for the effort. And for the rest, see you again in just nine months from now!

Posted by Anibal Invictus at 9:08 am 9 comments

The annual "Stats Assessment" will be delayed a few days 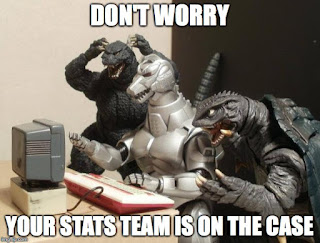 It is with deep regret that I must inform you that the Annual Statistical Summary (ASS) report will be delayed a few days due to a real world business event that requires my attention.

I am well aware that the vast majority of your will be deeply disappointed by this news.  It is not lost upon me the majority of the participants don't really like painting minis and only sign on to feel part of the statistical aspects of this sacred endeavor.

Rest assured that I am working when I can on the summary.  Given the magnitude of Challenge VII's scale, I have had to look for alternative energy sources to power the calculation machines.  It's surprisingly difficult obtain nuclear materials for a home reactor if your not "properly" licensed by the government.  Difficult, but not impossible if one resorts to, ummm, non-traditional market sources.

There's a very slight chance that the security services of your respective countries may bring you in for questioning about these activities.  Given the covert nature of these transactions, I've used a set of aliases to cover my tracks.  It's kind of a funny story because I'm really not that creative so I just used the names of the other Challenge participants.

I do expect to be able to publish the stat by Saturday.

From LeeH - Conquering the Lead Mountain

This years Painting Challenge has come to its inevitable conclusion and I have to say its been an absolute blast. My painting output has been consistently high throughout the event and I have shaved a significant portion off the summit of my lead mountain! I'm never going to be a contender for the top ten but I'm very happy with my final points tally which not only smashed my target but also topped my personal best for any of the challenges so far. I've set the bar high for myself next year! Curt has asked us to post pictures of ourselves with our painted miniatures from this years event and like a good boy I have done just that.... brace yourself, I'm not a pretty sight! 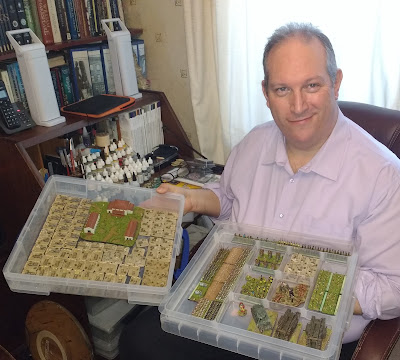 I've been keeping track of my points and progress throughout the Challenge as my way of keeping myself motivated, focused and organised (just slightly OCD). It clearly worked because as the red line shows I utterly smashed my target this year. 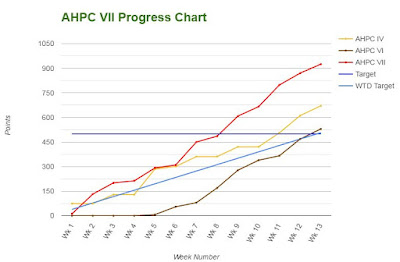 The 7th Analogue Painting Challenge has been a fantastic event from beginning to end. The standard of entries has been exceptionally high and a vast quantity of lead (and plastic) has been painted. More importantly the Challenge has proved yet again what a fantastically talented and generous community we belong to. I for one am already looking forward to, and planning for, next years Challenge ...if the Snowlord is mad enough to run it again of course. That's me done and signing off for this challenge. See y'all next winter!
Posted by BigLee at 3:57 am 15 comments