From SeanS - The rest of those 28mm scale Goblins (70pts)

Like a moth to a flame, I have run up to the deadline once again. It seems I can't help myself.

This week is the sore thumb edition as I somehow jammed my thumb by someone punching me in it. I don't think I could repeat that if I tried.

So I have mightily struggled with the bunch. My usual problem is to get them within spitting distance and then get defeated by the fiddly painting. By not having a standard uniform I created a bit of a headache for myself and found some difficulty in persevering with my color scheme.

In the end I went with a few differing shades of grey and added a few blues and even some green to the ensemble. (Can goblins wear green, or does it clash with their coloring? I'm not a trained aesthetist.)


For the basing I did my usual ground work, but tried out my new GW Middenland Tufts.  They look okay, but I feel like I cheated without also adding my regular flock. In the last picture you'll see one of the older basing materials and can judge for yourself if they fit.


While I was starting these I was completely unaware that three of the figures sported shield nubbins. Fortunately I have tons of old plastic shields.  Unfortunately, 20+ year old plastic shields can be quite brittle. The one in the middle split in half as I tried to jam it on over the shield boss. Oh the humanoidity! Somehow I managed to glue it together so you can't tell. The shield on the right is molded that way. One of these days I will press myself to do a more complex design, but the shields are hand painted. I would ask for my money back if those were decals.

So done and dusted. Here's the full unit, these 14 plus the 6 finished earlier. 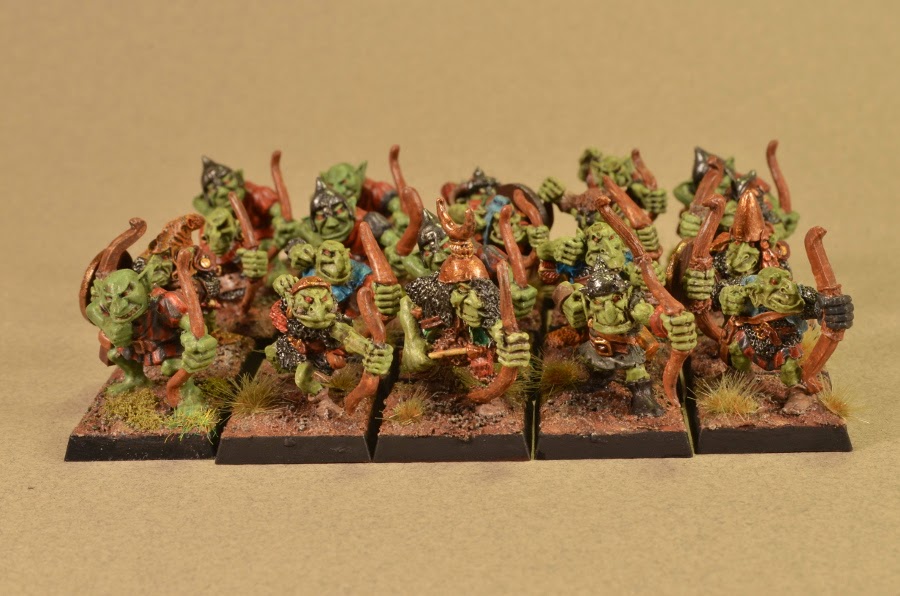 These guys are awesome Sean! I love seeing these old school casting - all those long noses and beetle brows just kill me. I also like the bright brass colour you've used for their metalwork as it looks very, um, gobliny(?).

I think a mix of your old basing with the addition of a few judicious tufts would be spot-on. Just my two cents...

I hope you thumb heals soon!

You will have to excuse the poor quality of the photos - I will post better ones in a few days once I return to Sydney.  These have been taken on the iPad sitting in a hotel room in Canberra as I pack up to go to the first morning og Cancon where these new figures will make their debut.  (Postcript - not only is taking photos not so good - but posting to Blogger from an iPad is an exercise in patience).

In addition to my last post, these are fruits of my labour over the past three weeks as I added to the existing Italian troop types so I could field a Papal army in the Impetus system.

So first up are the kings of the field in those days - two pike of Landschnecht pikes.  The figures are Foundry and the pikes are - well sharp.  I have the painting list sitting beside me (on the back of the army list as it was handy at the time)- it shows a combination of 16 colours in deep, mid and highlight for their fabric alone - plus all the rest.

Next up is a unit of Italan infantry - these ones are Old Glory figures and look suitably determined.

Finally a few shots of the two units of command.  The guy with the big round red headress is Perry and the other three from the Perry Knights range.

Finally flags on all of these are from Pete's Flags who you can find on the ...bay.

The command stands are brilliant as well - I love the guy with the feathered pizza on his head. He MUST be a high-ranking officer with that lid!

I hope you have a great time in Cancon! Let us know how it all worked out.

A recent return to Empire of the Dead gaming, having enjoyed painting up Baskerville earlier, has had me slotting a few extra models in the main painting queue...

One such extra is this Nosferatu Faction Thrall...

I kept the colour palette dark and drab as befits his sinister background.


The eyes were a little tricky being right up against his face-concealing scarf/mask.

He is wielding an enormous Steampunk/VSF gun, that looks something like a ManPacked Gatling gun, or may be a Volleygun. Either way it can lay down some serious fire-power to assist and support the close combat orientated Nosferatu faction.

And if the action still gets a little too close to home for him...

...he has a rather nicely slung sword and scabbard across his back...Drop the big gun, draw the sword, and we're in business!

I've got a similar big gun in the pipeline for my Gents faction, and am busy getting paint here there and everywhere on differing models... I've been dotting about a bit and not actually getting many completed... Must try harder!

That's a very cool figure Scott. I like the muted tones and the detailing on the sword/harness looks ace.

I always wonder about the ammunition for these multi-barrelled BFGs - I would assume they would go through shells like nobody's business. Hmm, perhaps he forgot the ammo belt back in the coffin next to his eyeliner and foundation makeup? Well, good thing he brought a sword otherwise the boss would have a real fang to pick with him... ;)

I look forward to seeing the Gents faction!

Posted by Scottswargaming at 7:21 pm 9 comments

From SebG - The Ancients are Coming (80 Points)

Finally, my first proper entry in this Challenge. I've been slowly but surely painting and I finally show you some stuff. They're all 15mm based for Art de la Guerre.

First, some Eastern bowmen from Essex I received at Christmas. They are fairly generic so that I can use them in many different armies. 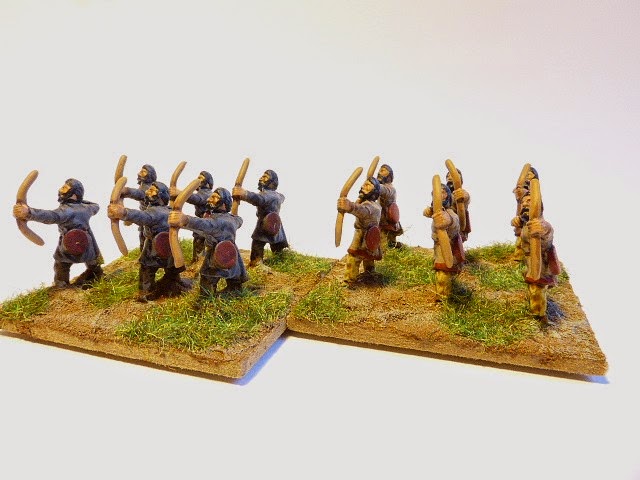 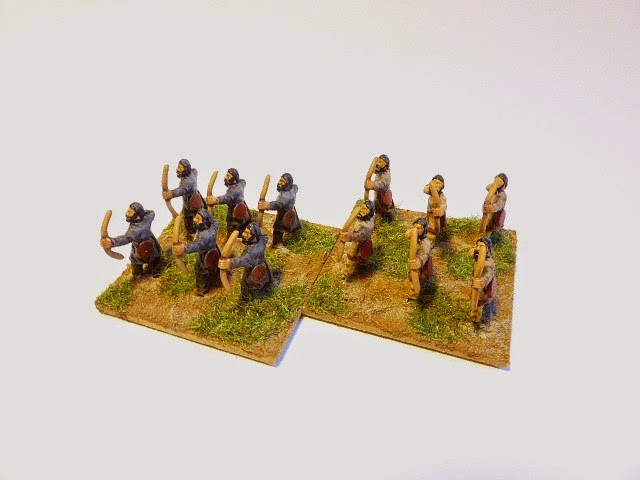 Next, one unit of Greek cavalry. Once again, lots of potential uses. You'll notice one of the horse lost a bit of paint. Sadly, when I took them to take a picture, they fell on the floor. No real damage apart from that. Damn! First casualty! 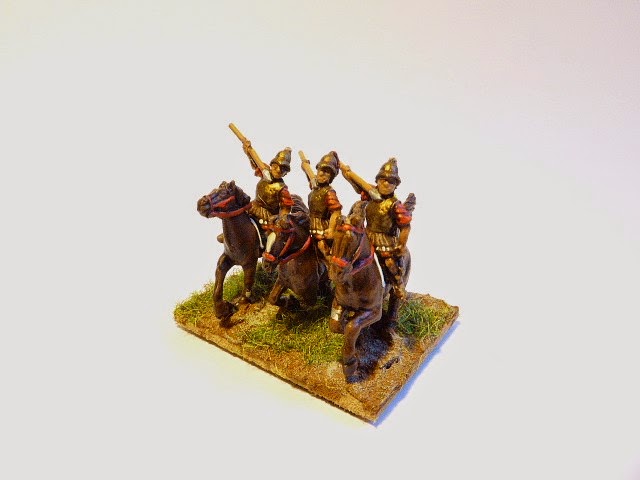 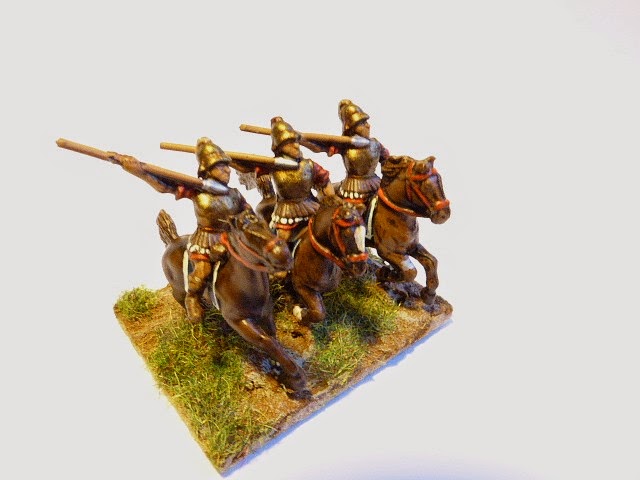 And finally some Xyston hoplites. I had started them in November in a red palette, since I wanted to create a guard unit. But I wasn't convinced. Then I remembered something Tamsin had said about a dolphin shield I had made previously. I had my idea! These guards would be considered as the "black guard" devoted to a tyrant who's real objective might be really sinister. Therefore, I started all over again: Cleaned up, primed in black this time, and I opted for Lovecraftian designs on each one of them, apart from the dolphins, but then, if you know your Lovecraft mythos ;) Anyway, all the shields have been handpainted, as carefully as possible. 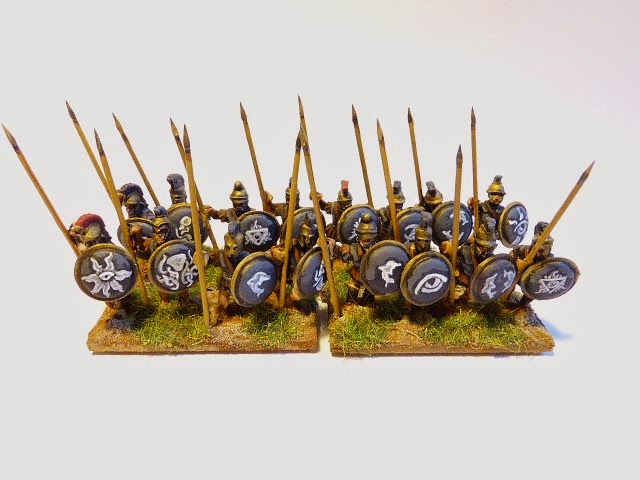 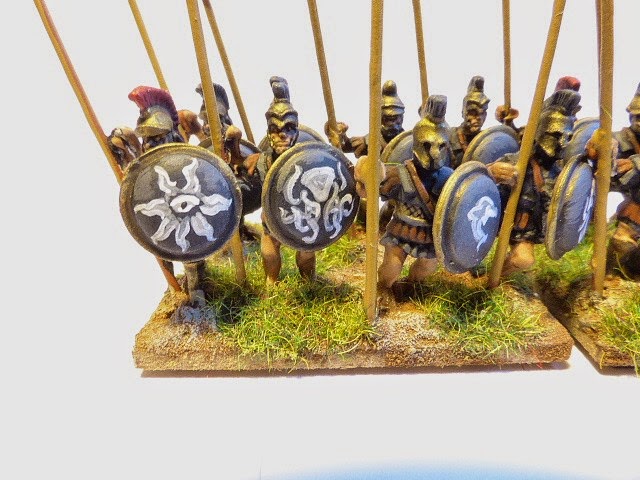 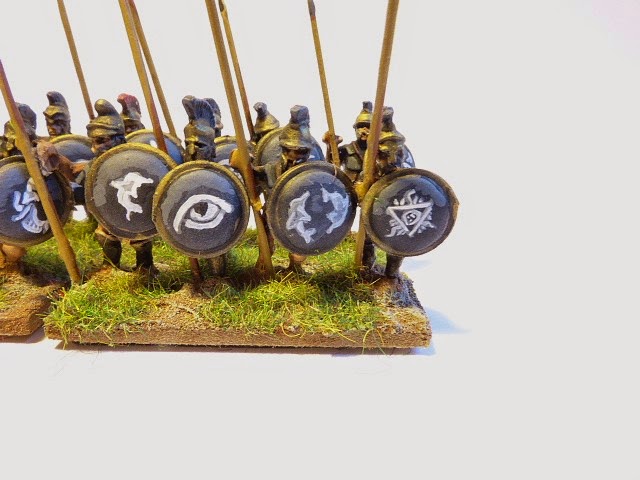 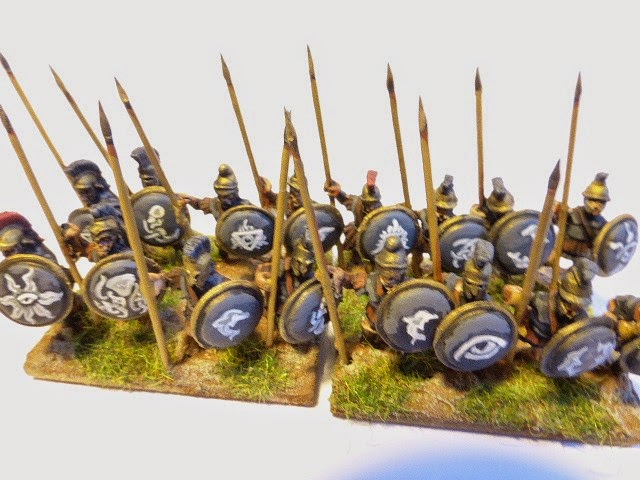 So, all in all, I guess I get something like 68 points, plus maybe some extras for the shields?

Seb! I know you submitted an entry to the 'Victoria' theme but it's great to have you with us on the main page.


The archers and cavalry (owch!) are great but I admit I had to give a double-take with these hoplites with their hand-painted shields. They look like 28s!!  Wow, amazing stuff Seb! This year we've been treated with several entries of people doing fantastic freehand work and this is another fine example. Bonus points duly awarded!

From SteH - Some more of those blasted Orcs! (20 Points)

That's right I've managed to repair a few more of those damn GW Orcs that I mentioned earlier. I have to say, and I'm probably repeating myself but they are not GW's greatest hour and I find myself not wanting to paint them. And this is the crux of my problem as I enjoy the game, imagery and genre in general but some of the models are a bind. And yet every now and they do some that  are a joy to  paint (Beanomir, Borosean.... you get the drift) so I guess I'll persevere. I am looking forward to the Gondor Rangers that are next in the paint queue so hopefully that'll replenish my mojo!

Anyway here's 4 of Mordors worst, true reprobates if ever I saw some. These will probably get an outing against ScottB's Rohan, Gondor or something suitably scary and in true Orc style run for the hills, but that's part of the fun. 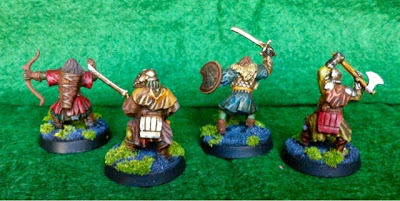 Now I'm off back to the paint table to continue working on my comedic and hot bonus rounds, paint a ton more Uruk Hai and try desperately not to veer off plan and paint some 15mm WW2 tanks.

Well, they may have caused you a bother but they came off wonderfully Ste. Did you use inks? I quite like the shading. My favourite is the nasty one with the axe!