January brought around Australia’s biggest wargaming convention – CanCon held annually in stinking hot weather in Canberra.  This year I decided to change my usual Australian Army in the Western Desert with some slightly bigger tanks (thanks to their British cousins).  The Australians are a fun army but they only have a limited arsenal to choose from when it comes to vehicles (their heavier tanks never left Australia but hung around waiting for the fight to come to them).
Enter the M3 Grant and the Daimler! 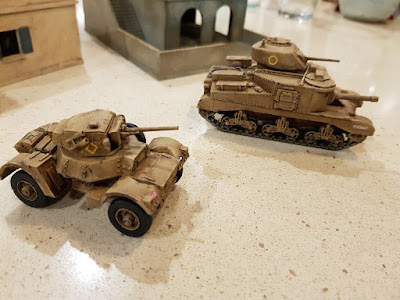 Both of them turned out pretty nicely with a little bit of weathering on them.  Originally I was going to add some weathering powders but after playing around a little decided against it as it just made the models look to messy.  Usually I also add a bit of rust to vehicles but thought that there would not be enough water in the desert to rust!  Instead grime, chipping and bit of diesel spill would do. 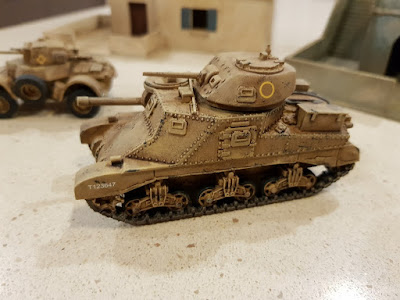 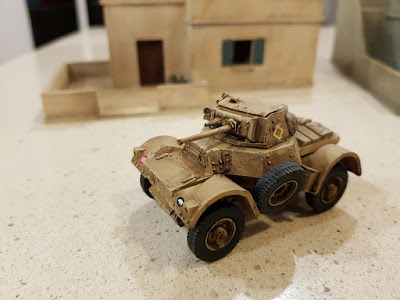 In addition to finishing up an army, I decide I would build a table of desert terrain.  These are the first two buildings that are completed. 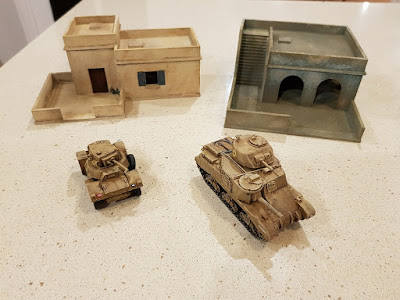 It took a bit of experimenting to get the look that I was after with the buildings - textured paint then a couple of different sprays finished up with weathering and washes for the grime. 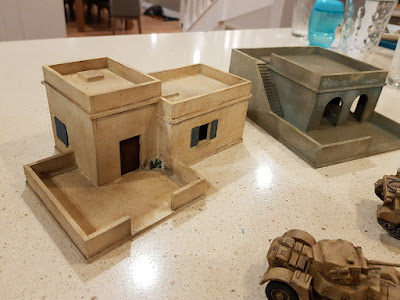 Very nice work, Andrew - you'll have to tell us who made the vehicles and buildings, they look pretty damned cool!

I've tagged the armour as an entry in the What A Tanker! rounds, since it's the right scale and it's a worthy competitor in the field. 20 points each for them.

The buildings occupy a bit over one standard cube, so on a slightly ad hoc basis, I'm giving them 25 points.

Email ThisBlogThis!Share to TwitterShare to FacebookShare to Pinterest
Labels: 28mm, AndrewE, What a Tanker!, WWII

From Brendon W - Red and Black and Arab Infantry (142 points)


From Perry Miniatures plastics a variety of reinforcements for a few different units. A lone officer Knight on his horse, four pikemen, four for a black powder unit and four for a billmen/halberd unit.
A few non standard builds among them with hand swaps, weapon swaps and wind instruments from other kits.

Arab infantry double ups to bolster the ranks of two unit types. Spear armed unit and a sword armed unit. All shields are hand painted and I am happy with the result.  I decided to really try for some brighter colours on some sword armed dudes. Made for a change from my usual painting style and I enjoyed the mini challenge I set myself.

I was lucky to get these photos taken before I left for work. An early morning thunderstorm with plenty of rain threatened to not go away and it made my photo zone (back yard) rather dark and very wet. Lucky for me it cleared away just in time.

The welcome return of the Knights of Beer and Bacon! And more of the soldiers of the medieval Middle East! Exceedingly fine work there, Brendon.

More Plague Marines for my Guards of Morr army. These are from the Dark Imperium starter set. Similar heavy washed and drybrushed method as the previous group I painted couple of weeks ago. These will form the core of my Death Guard army in our Urban Conquest campaign. 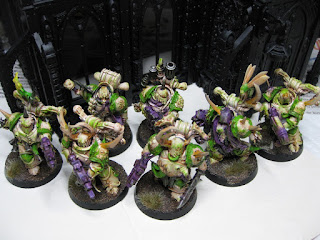 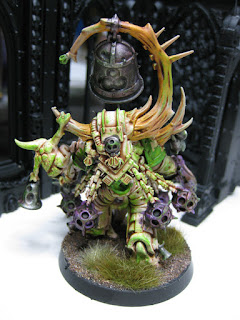 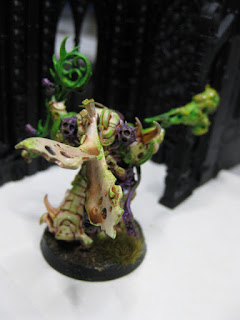 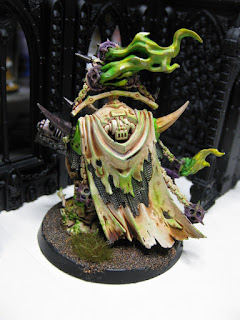 It's a good thing you've caught me on a good day!

I'm scoring these pestilential fellows at 5 points each, except for the big fellow who I'll score as a 54mm fig because he's such a treat for the eye (and because he's a bloody huge bugger as well).

Posted by Teemu Laaksonen at 8:29 am 9 comments

My third and final post of the week is another Crusader. In this case, a Space Marine from the Indomitus Crusade. A few weeks back, my local gaming group decided to create our own chapter of space marines between us. Each of us could contribute a part of the background, the name, the colours, the history, etc. We finally came up with the Astral Hammers, a newly created chapter of Primaris Marines. Their background was that they were formed from the Iron Hands geneseed and that their leadership were all members of the Iron Hands legion who had been wounded and kept in stasis since the Horus Heresy. 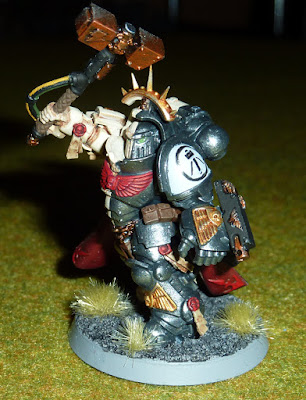 For the chapter symbol, we went with a hammer (obviously) along with a simplification of the Nagoya City symbol, where our group is based. This was free handed onto the shoulder pad using a marker pen and then some more white paint to tidy it up a bit. For the colour scheme, we settled on a halved pattern, with the bone white representing the biological part of the chapter and the gunmetal grey representing the technological skills and aptitude of it's members. 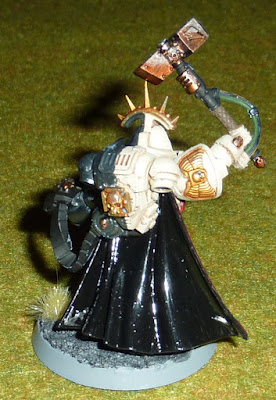 Being from a chapter with the name Astral Hammers, it seemed only fitting that my captain should be wielding a hammer himself. In addition to switching out the original weapon, I replaced his wrist mounted gun with an older plastic version and also replaced the head with a Heresy era MkIII helm. The cloak was painted with several layers of black mixed with gloss medium to make it reflect the light. 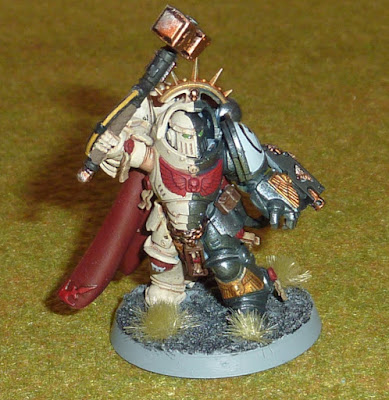 You can just make out the 3rd company badge on his right knee in the above picture. Painting the mini was a bit challenging, as there were no marks to guide where the colours should split, so it was all done by eye. I think it came out looking ok though. I'm trying to decide if I want to paint any more of these guys. I don't currently play 40K, but he could use some friends on the shelf.

Great work in coming up with a new chapter, Stuart!

In view of the handpainted insignia (and the fact he's a total unit), I'm giving you a couple of extra points. Originality deserves a reward! I'm also labelling it as a Squirrel entry since it's different to the other two for the week.

My second post this week is a bunch of Crusaders. These ones have a slightly more fantasy take on the theme though. The models are by Privateer Press and are for the Menoth faction of Warmachine.
The Protectorate of Menoth are the religious fanatics of the Warmachine world. Their aim is to spread the word of Menoth to everyone. That word is 'FIRE'. As a rule, they like burning things. On occasion they may smash something with a massive mace, and then burn it, but only if they feel that simply burning it isn't enough. 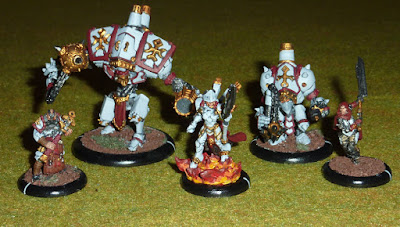 I'm not a Warmachine player myself, (though I played ages ago), these models were done for a friend of mine who plays fairly regularly. The Warmachine scene here in Japan is actually fairly busy. The straightforward nature of the rules means that they can be translated easily and big, stompy mechs are always popular.

I'm not altogether certain what these models are exactly, but I can tell you that they are Warjacks. 'Jacks are an important piece of the Warmachine game. They are capable of dishing out a lot of damage, taking a lot in return and can be powered up by having the Warcaster (leader) of their battle group handing over extra magic power. 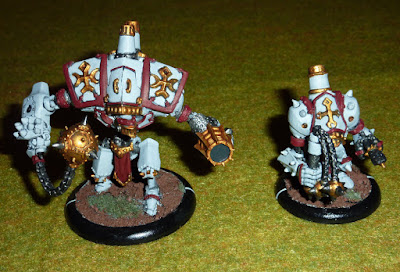 Again, I'm not entirely sure on the names of these figures. The central figure is the Warcaster of the group and, as her base demonstrates, she loves fire. I think this would be a fantastic model to use OSL techniques on, but I'm not that great of a painter. All of the models have white marks on the sides of their bases to denote where their front/rear arcs are, in case anyone was wondering.

None of these models has any pure white on it. The armour was all painted with Vallejo's Light Grey mixed with White on a 1:1 basis. It's close enough to fool the eye and is far easier for painting.

It's a good thing I can detect how tall a figure is from a photograph, thanks to my having been visited by three good fairies in my infancy...
; )

We'll say 5 points apiece for the smaller figures, and I'll take a stab and say 7 and 10  for the Warjacks, for a total of  32 points.

My first post for this week is a batch of six Crusaders. The models are all from Fireforge Games.
Originally, I had planned to have these finished and painted by last week, but sometimes life gets in the way. A friend of mine left the country a few weeks ago and went back to stay with his family in New Zealand. He did this on short notice and left a lot of stuff behind. He asked me to go to his old apartment, collect his hobby stuff and put it into a lock-up for him. So on Saturday before last, I took a train for 90 minutes out to where my friend had been staying and then spent most of the day moving boxes around. No painting was done that day.

The day after, I had planned to do some painting, but my better half had to write a report for our local community group and asked me to sit with her as she wasn't familiar with the software I have installed on my PC. This took about 4 hours or so, no painting was done that day.

So, two days of the weekend down, but I had a cunning plan. Monday was a public holiday. I could paint then. But wait, the Water Feature bonus round was coming up and I needed to finish my entry. Grabbing everything I needed, I proceeded to finish off the terrain I had been working on during the afternoon and finally added the Water Effects to complete the piece. With that done I went to have dinner, expecting to get some painting done in the evening. After a nice meal I went back to my little hobby hole and found that the terrain had warped itself into an unusable mess. The glue had been fine. The paint had been fine, but the Water Effects had done something to the top layer of the foamcore and ruined it. This killed my motivation entirely and so no painting was done that day either. 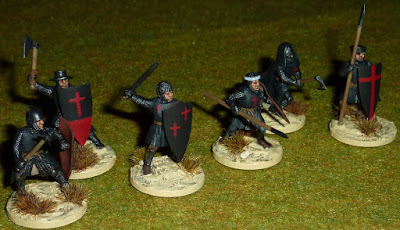 So, these crusaders are a week late, but finally done. I have more on the way for next week (hopefully). Fingers crossed I can get some serious painting done this week. I am not sure about the colour scheme I have used, but I'm happy with it. Nobody in my group is a serious historian and if it looks good on the table, that will satisfy me.

The first of your submissions for the week has netted you 30 points plus another 5 for the handpainted shields. Very nice work!

What's the next item on the agenda...?

Back to Work Wednesday

I returned to work this week, so we're a little pressed for time just now... 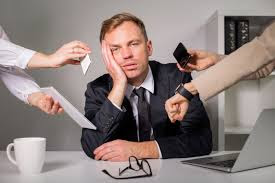 What's in the 'In' tray today?


Now, let's see if we can get this lot blogged before lunch!