This week I present a Cavalry unit to increase my forces for project Goblin Army. These units as most of you would know are probably three projects. The Goblins, the spiders and the large Unit Base. However they all come together at the end. I placed the rider with the strange sickle sword on some rocks leading from the rear which seems correct for Goblins that have a game rule called "Yellow Belly". All of the spiders have become hairy by gluing Flock onto them. I avoided the faces and legs. 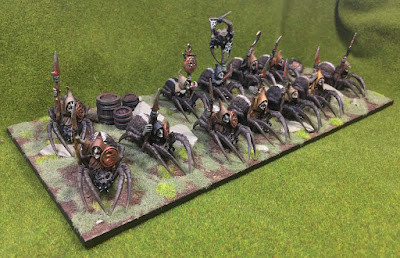 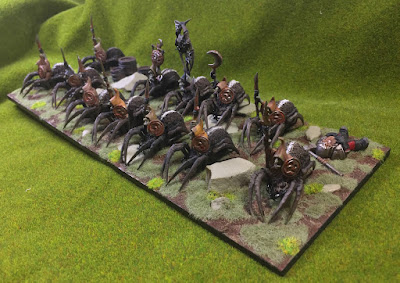 Some of the riders I had originally glued to the spiders which did not make it easy to re-paint them. Much easier to paint riders and mount as separate pieces. As a general guide to mount these old GW Night Goblins onto the Spiders it requires chopping off the bottom of them. Use the very lowest part of the hanging belt as a guide. Some Goblins require further cutting to make the lower part a little narrower and it helps to cut off a wedge from the lower back area to help them nestle back further. I did cut some spear points off and repositioned them but its not really noticed in the unit...but I know. The Barrels on the base are a Renedra product and the Dwarf is from Mantic and painted in colours to match my existing Dwarf Army. I did have a plan to place 14 ridrers...then it was 13 riders...but I think 12 is OK in the end.


I just love these Brendon, what an awesome unit!  The basing, conversion and little extras just combine perfectly to make a truly unique force, really well done Sir!  I have added some extra points for the prone dwarf, conversion and basing taking this entry to 126 points, cracking stuff Brendon. 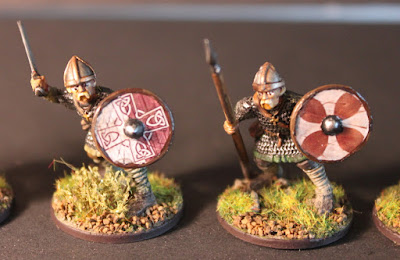 Project 5 is SAGA. I started playing SAGA last year and cobbled together a utility army from Warlord Celts and Frostgrave Soldiers that could - at a stretch - represent most of the factions who don't have horses. They are a sort of celticy, germanic, stripey pants and plaid warband. In the end I'd like to have several actual armies (Jomsvikings and Anglo Danes recently arrived from EBay). 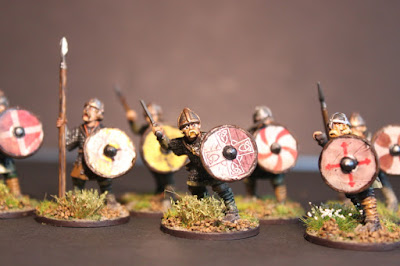 I came around to enjoying playing the Anglo-Danes - a faction that benefits from having large units - so I added some Saxon Thegns to the mix but, shamefully, never got around to painting them. A few months ago I experimented with blocking and dipping one in the hope that fast might work but in the end just kept showing up with these figures grey primed and shieldless. 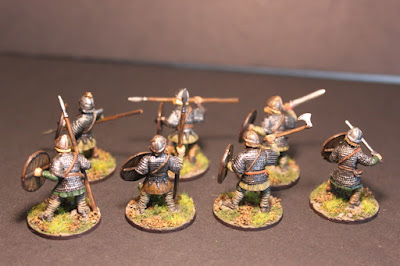 The Painting Challenge has motivated me to finish these guys - I went for a sort of unifying green cloth and used the Painting War: Dark Ages for ideas and inspiration. 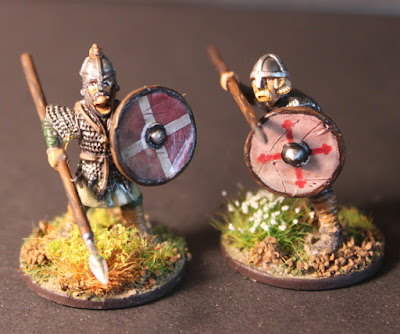 Before I was born my Dad came back from Australia with a boomerang for my brother - on the box it said "Read The Bluddy [sic] Instructions" and this phrase fell into regular family use. I wish I had read Gripping Beast's bloody instructions for their shield decals. I didn't and spent a lot of time gluing heavy plastic decals to the shields and trying to matt varnish them. Eventually I figured out something was wrong and that these were peel, stick then soak decals. They are nice decals but I need to learn more about how these shields were put together to make them work - the nicest looking pro painted ones take the shield design over the rim and have little nails at the back - in future I'll try and make the time to hand paint them. 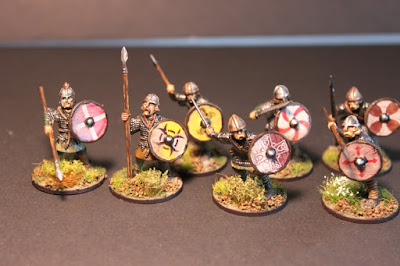 
Well done Pete, a cracking looking unit nicely tied together with colour palette and basing.  I share your pain with the decals and have similarly fallen foul of them, cursing what should be a time shaving device and in fact turned out to be a bitter disappointment.  That said, I think you have rescued yours rather well and I wouldn't necessarily have appreciated your difficulty with them if you hadn't mentioned it.  Bravo Sir and another well earned 35 points to your tally.

This week it's more 25mm goodness from Ral Partha.  These are also from their most recent Kickstarter and are a group of 15 spellcasters of varying types.  I decided to base them for use in my (hopefully) upcoming games of Chainmail later this year; thus, all got the outdoor look.  Here's the group: 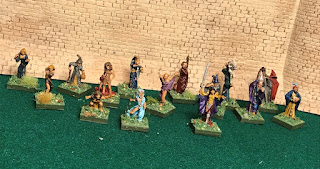 For convenience, here's a close-up of the lads first.  They're an eclectic mix.  Several of the figures are the same as ones I painted a few years ago.  In hindsight, I should've matched the paint scheme so I could use them in a D&D game both in a dungeon and on the battlefield.  The sword the guy in the foreground has is...a little big? 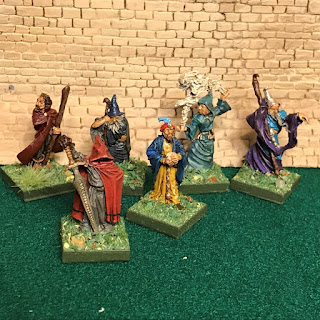 The first group of females.  They are a bit of a mix between what I would call tribal spellcasters, witches, and more typical sorceress's. 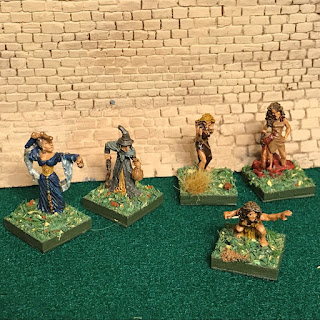 Three more females.  They seem to not dress sensibly for battle, but I guess I never had any sense of style, so who am I to say. 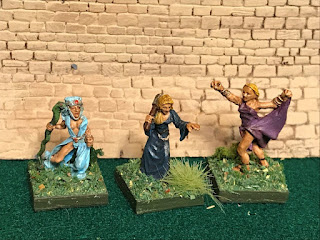 The last one was the Kickstarter's star, The Vampire Queen.  It's a nice figure, though the sword seems a bit huge to me, but what are you gonna do.  Her fangs are hard to see, but they are there! 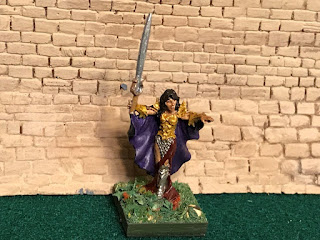 15 figures at 25mm for 75 points.  I have an even larger batch mostly done, but I'm not sure if I can squeak it under the deadline!  We shall see.


These a smashing Keith and what a great variety of poses and styles - a witch for all seasons! Cracking work Sir and a well deserved 75 points to your tally. Must dash, lots to do!  There is always lots to do, and never enough time, but today the exhaustive list of chores needs to be completed before the rugby starts this afternoon.  The 6 Nations rugby tournament is always enjoyable and the clash between Wales and England a particularly tasty affair so excuse the brevity of introduction; on with the Saturday Showcase!
Posted by Michael Awdry at 2:35 am 1 comments

I completed what I consider a batch paint of 20 Polish Vistula Legion from Warlord Games.  Last week I showed off the drummer for the Musician Bonus Round.

Well here are the rest of his comrades. 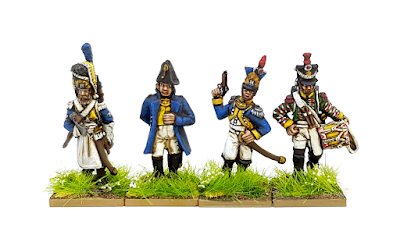 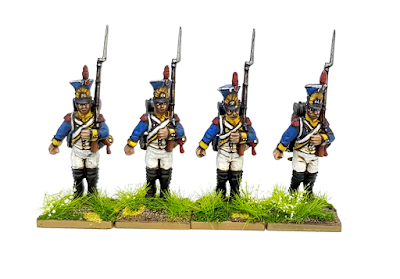 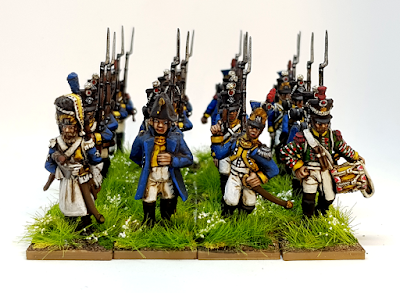 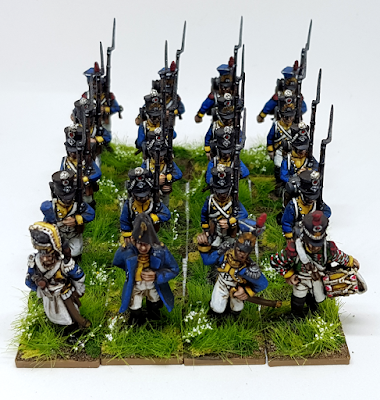 I have loads more of these spiffy chaps to paint and I must say I am rather fond of what Warlord have produced.

This should give me a much needed 95 Points for 19 Models as the drummer has already been counted.

Ahh, it's lovely to see some Napoleonics rolling out to wrap up the day, and better yet Napoleonic infantry wearing my favourite headgear: the whacky czapka. Lovely brushwork Dave. I especially like the details of that formidable sapper in his imposing bearskin - superb stuff. I look forward to seeing more of these lads in the future.

95 points for your climb up the roster - terrific work sir!

Posted by Left Handed Panzerfaust at 1:03 am 13 comments

Way back in the dimmest, distant past when the Warhammer world resided on one planet and everything was made of toxic lead there was a chaos champion by the name of Slambo. He looked a bit like the Heroquest warrior with two axes.  Not too long ago GW released an updated version of Slambo for Age of Sigmar. The model is God neutral, but is going to be worshipping dear ol' Pappa Nurgle 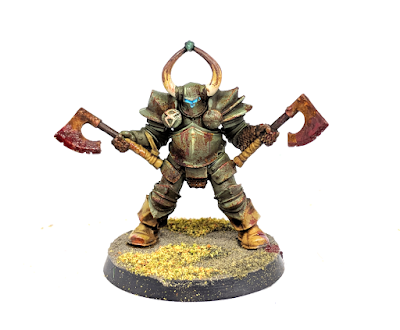 This is just the one figure this week, but one is better than nothing... right? He's a single 28mm figure on a 40mm base, so a whopping 5 points I believe?

Sure, he's only a single figure but what an absolutely awesome figure. Well done Paul!

I really like the rust and blood-bespeckeled armour and weapons. The eldritch light coming from his helmet is a great touch as well. I get a sense he's going to be a real beast on the tabletop.

Posted by Endtransmission at 12:55 am 11 comments 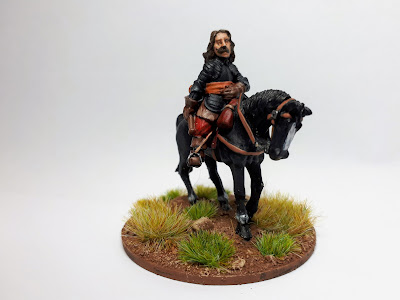 Only a small post today..
May I present the one and only Oliver Cromwell!! I picked Ollie up at a bring & buy, so I've no clue who makes the figure? 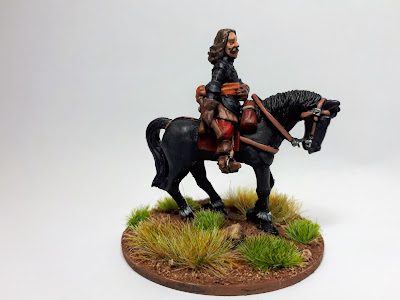 I'm not getting into the ECW, the figure's painted up as a pressie for my Dad. 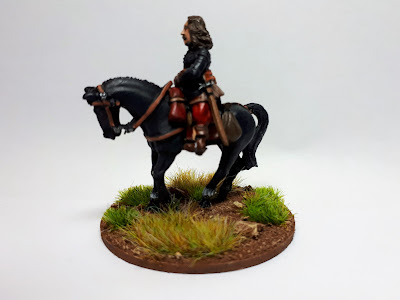 Very nice work Ray. I really like this figure (one of the nicer Cromwells I've seen), especially how you've painted the face and the effect of the blackened armour. I'd like to know who produces this version of Ole Warty as his face possesses a bit of pathos. I think your dad is going to delighted with him. Well done!