But not Prohibition era coppers this time. Instead I present you with some Orkish Russian Space Marines of the Spanish American Civil Wars of the Roses against the invaders from Mars.

Nah, let's be serious for a minute. Or at least try. 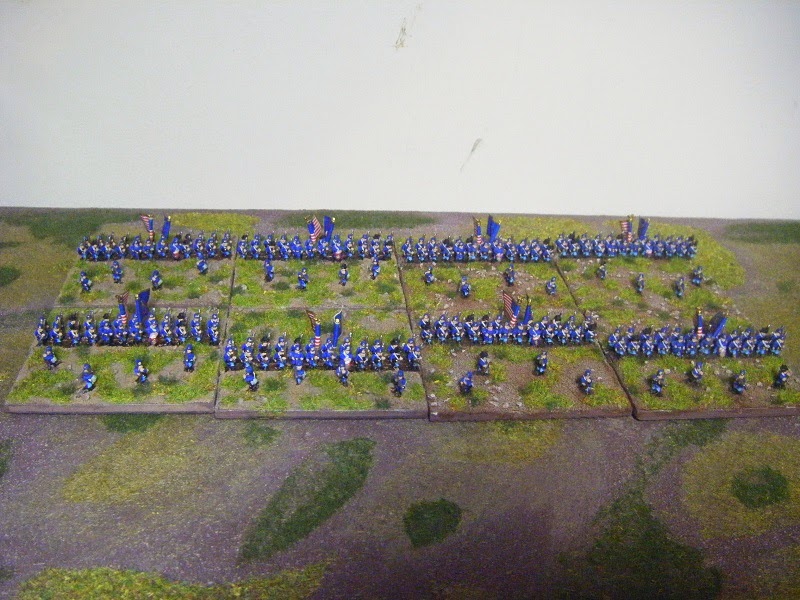 These are the first 6mm figures I've painted for about 3 years. I'd forgotten what it was like painting such teeny tiny shininess. It wasn't that bad.

I actually had four of these bases so, so close to being finished for last Saturday but didn't quite make it in time. So, you're getting them this week along with another four bases I painted up alongside the NSL power armour.

The two batches were painted and based slightly differently, but not so differently that you'd notice particularly. When I last [painted some 6mm ACW I was using Revell Aqua Colour paints, but have since switched to Vallejo, so I needed to find the most appropriate colours to use. 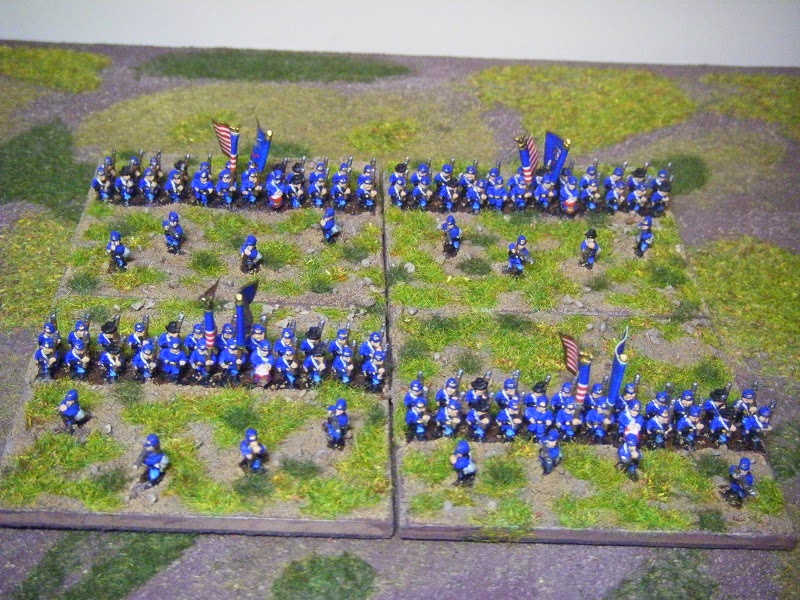 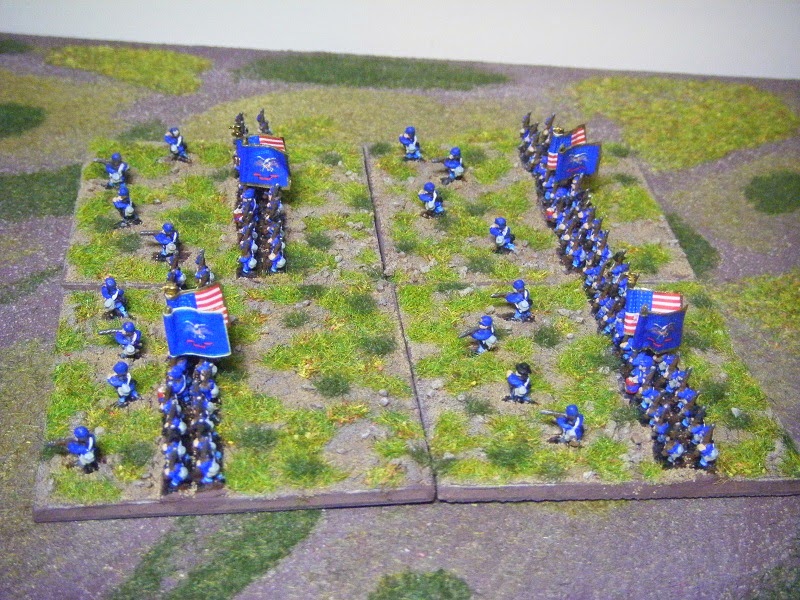 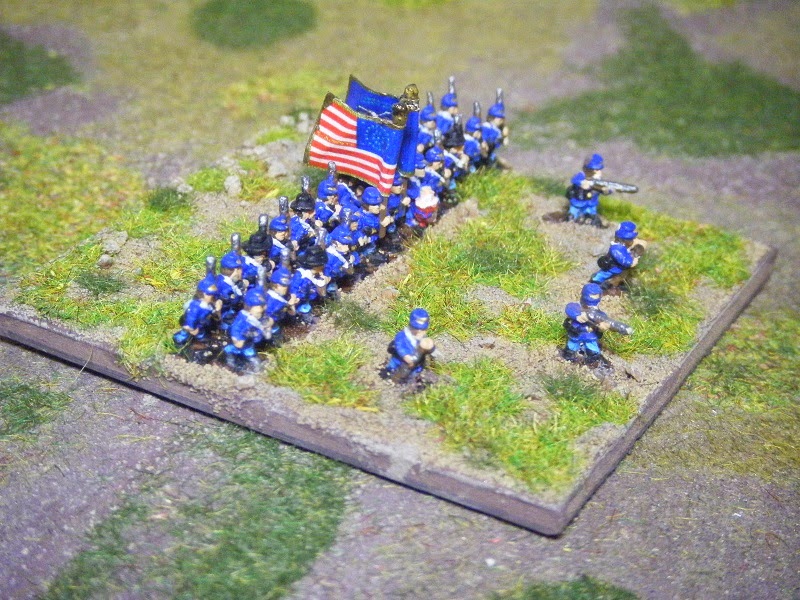 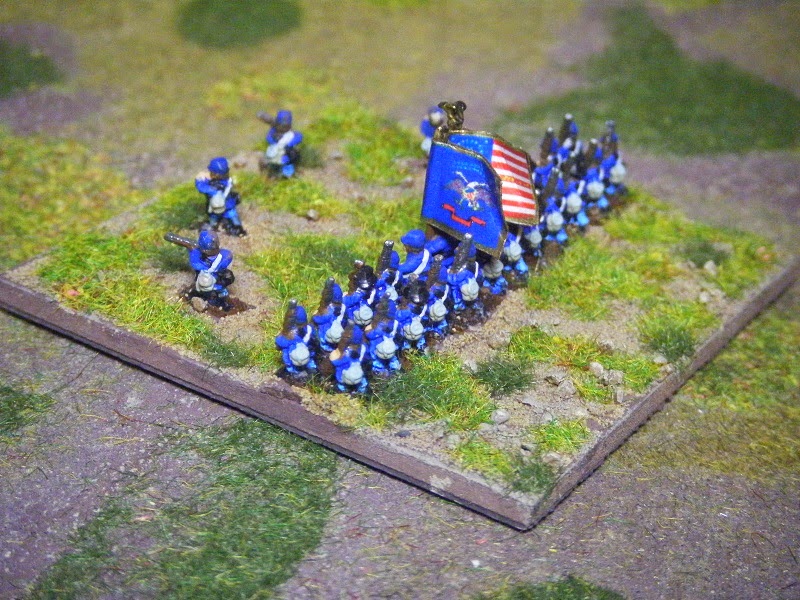 I actually used three different lots of static grass (summer, meadow and moorland grass) on these to give some variety as with 6mm good basing helps with the overall look of the units. 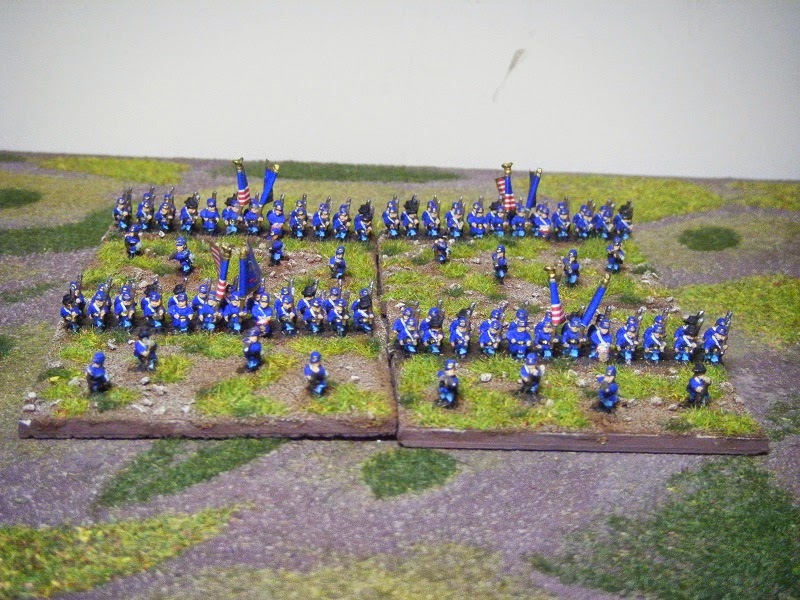 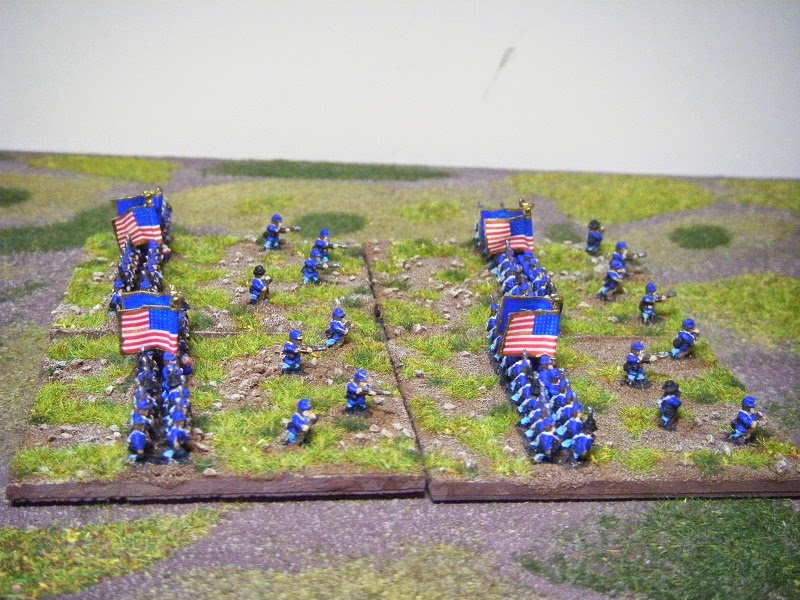 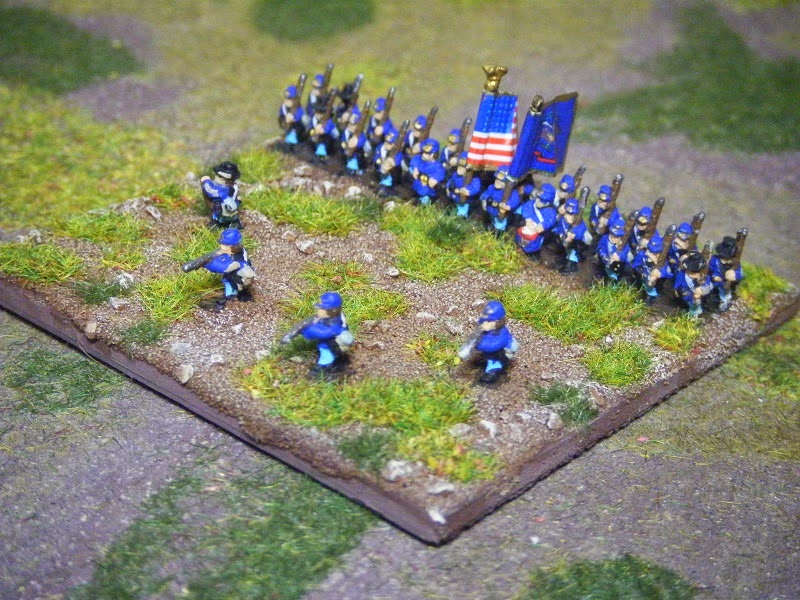 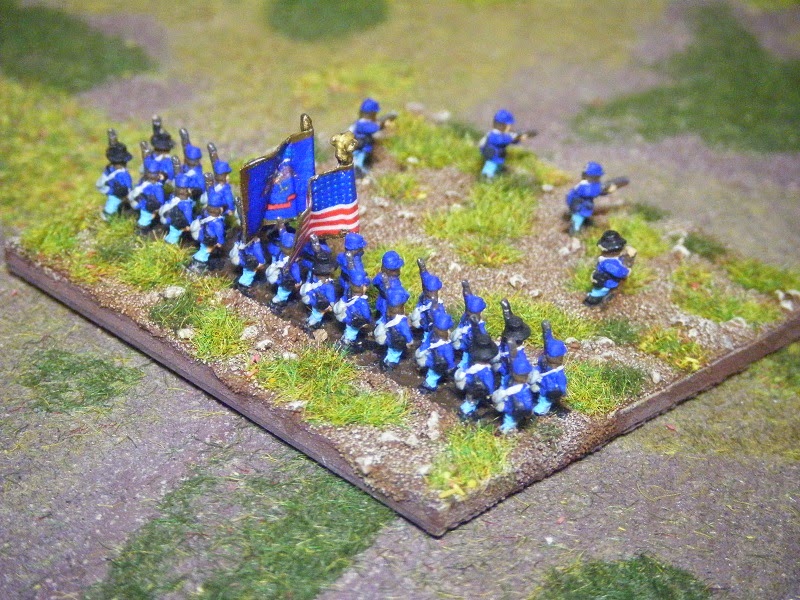 This will teach me to look at the bases before taking photos. It looks as though I must have splodged a bit of the paint I was dry-brushing with onto the skirmishers. That will need to be touched up at some point.

The figures are all from Baccus, as are the flags. I did go over the edges with a gold pen to disguise the white of the paper.

Hmm, can I very quickly paint up a 28mm foot figure to take my weekly total over 200 points?


Ah, these look wonderful Tamsin! Painting these little blighters one definitely has to be clean and neat but I think one of the essential things in doing micro-scale is to nail-down the basework as it can often make or break the whole aesthetic. With that being said I think you've really done a great job on how you've approached the basing of these figures Tamsin. The mix of foliage and tallus helps to accent the figures but does not overwhelm them. Great job!

I'm awarding you another 8 points for the eight sets of flags in this entry, so with this you've more than achieved your 200-point week. Well done Tamsin.

Also, with this entry you've managed to regain your lead from Alan and Ian, but with only a 41 point spread. I have a suspicion that we will be treated to a running battle between you three over the next few weeks!

Now, I with both you and Alan having submitted sub-15mm entries I need to get a wiggle on so I'm not completely shamed in our duel!

A bit more 15mm SciFi goodness for you. This time a bunch of 15mm NSL power armour troops from GZG.

At the club, there are only a couple of us playing 15mm SciFi and we have settled on Gruntz for our ruleset. We've also opted for group basing for the ordinary squads of infantry, for ease of play. It also means you can use 3 or 4 figures on a base to represent a squad of 6-8 troops. Troops in basic infantry squads normally have the same weapon, but each squad can also have 2 support weapons attached. I'm using 20mm hexes for squad attachments (none on this group).

It's a bit different with power armour troops, as their armour allows every trooper to carry a support weapon, but you have to pay for each figure with them rather than once for the whole squad.

You can also have specialists with heavy support weapons (or engineers, medics, artillery observers etc). I'm mounting these on 30mm hexes or 40mm for crew served weapons and small vehicles such as grav bikes.

But that's enough background blather, on with the post. 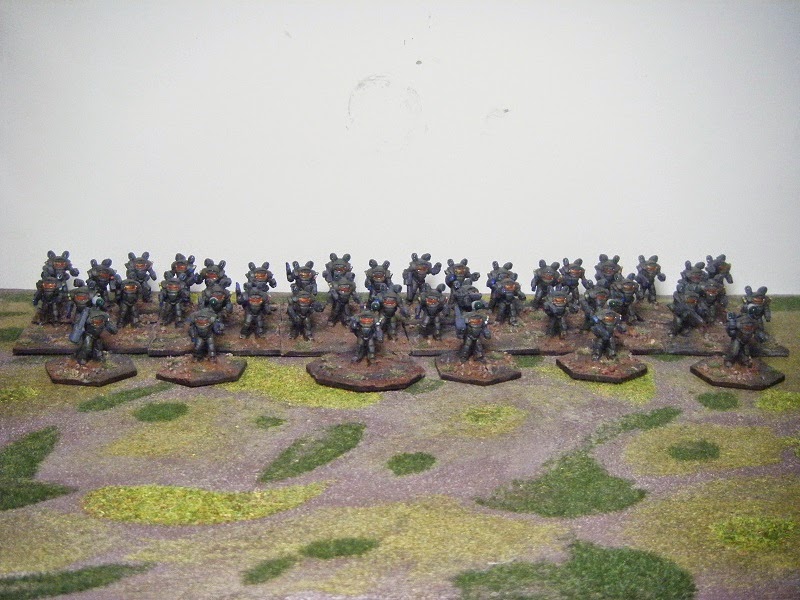 This entry consists of 42 figures and will either represent a company (one base = 1 squad) or a reinforced platoon (at 2 bases = 1 squad). There are a commander, 5 specialists (3 missile launcher troops and 2 sub-commanders/observers) plus 6 plasma gun squads and 6 SAW squads. 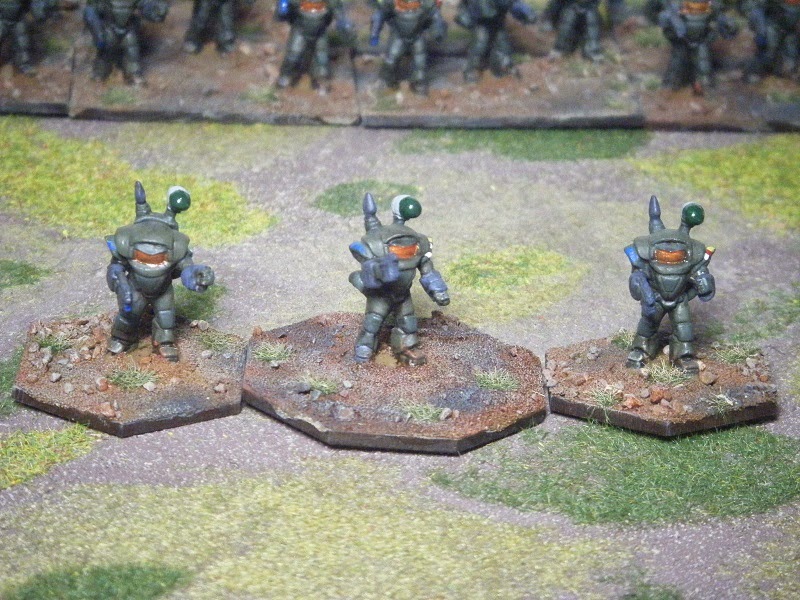 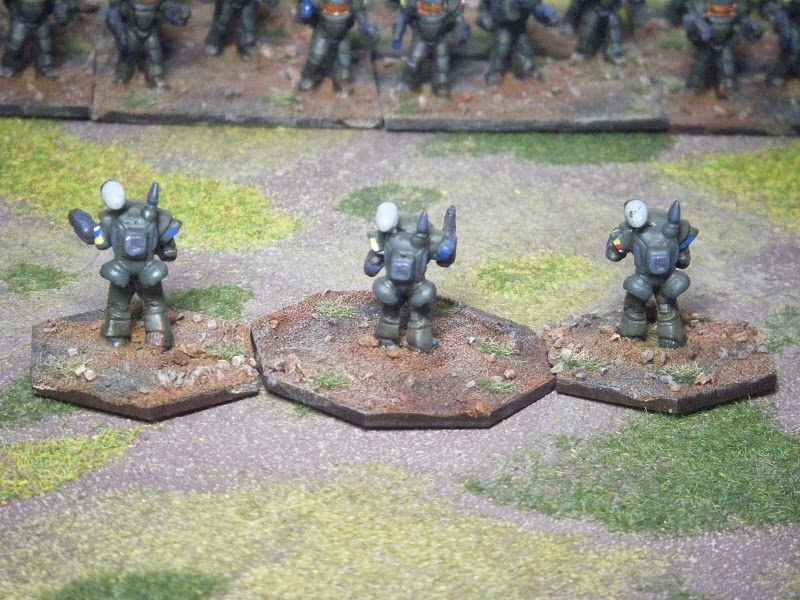 As you can see, they have various arm positions - the arms come on sprues and are very fiddly (and easily lost when they ping out of your forceps!). This is really good for creating some variety in the unit as there are only 2 body variants.

On their backs they have jump packs which are also provided on sprues. The commanders have the version with sensor and comms modules on top. 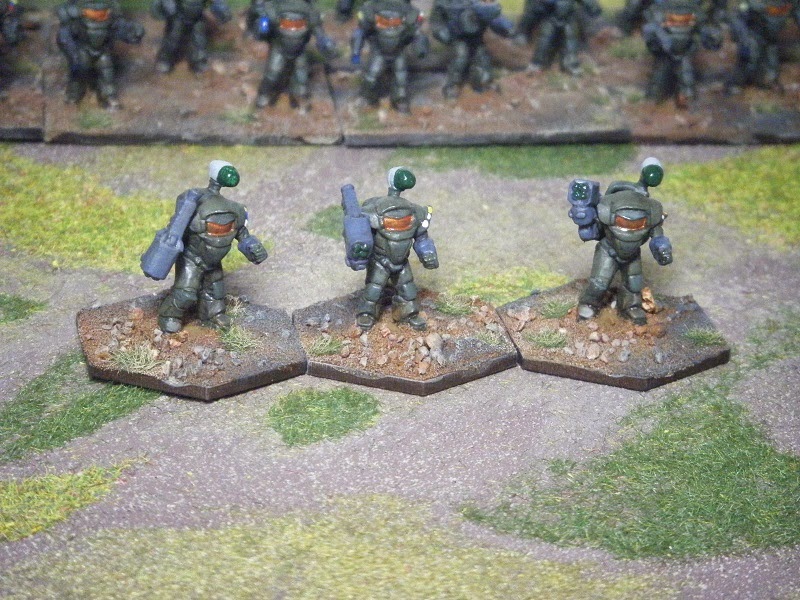 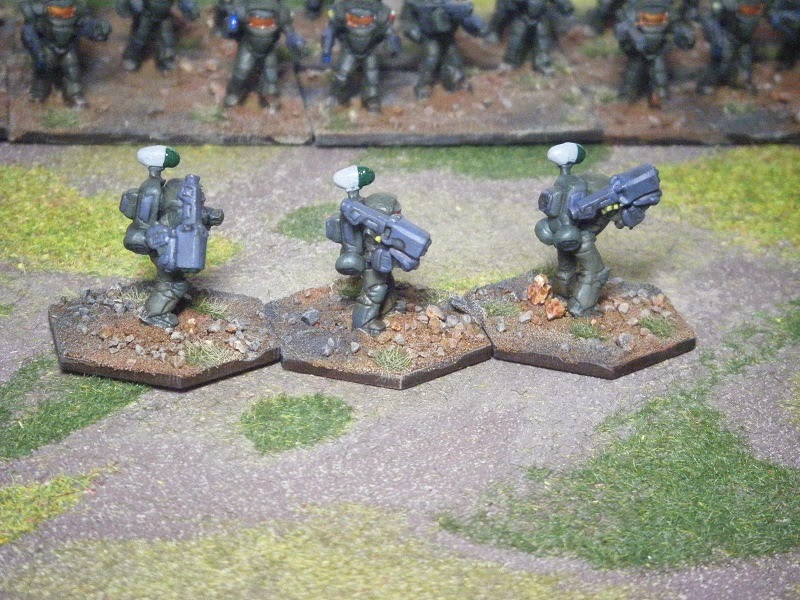 Just in case they encounter any enemy armour or bunkers, it's useful to have these missile launcher troops. These guys have jump packs with sensor modules only.


Which leaves the basic grunts of the company. Each squad will have 4 troopers armed with adapted assault rifles and 2 with squad attachment support weapons - either a heavy plasma rifle or a SAW. Their jump packs have shoulder mounted rocket/grenade launder modules for a bit of extra firepower. 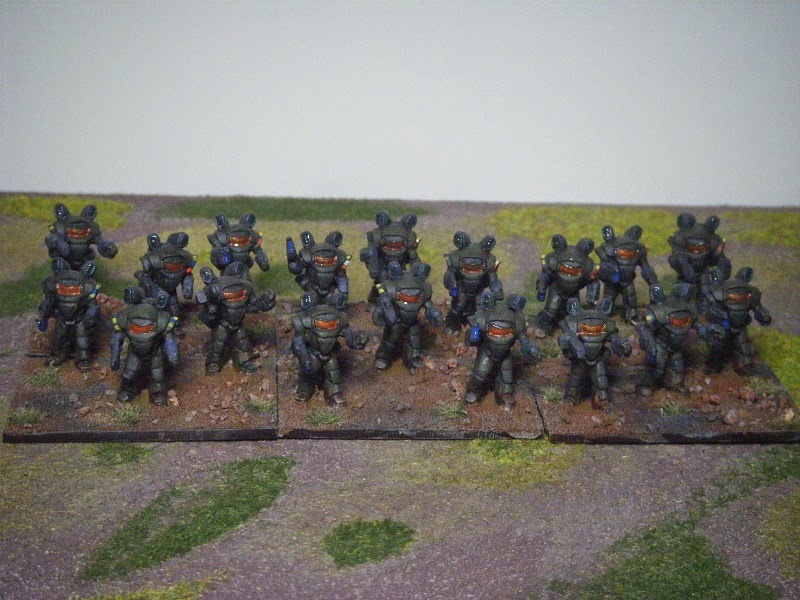 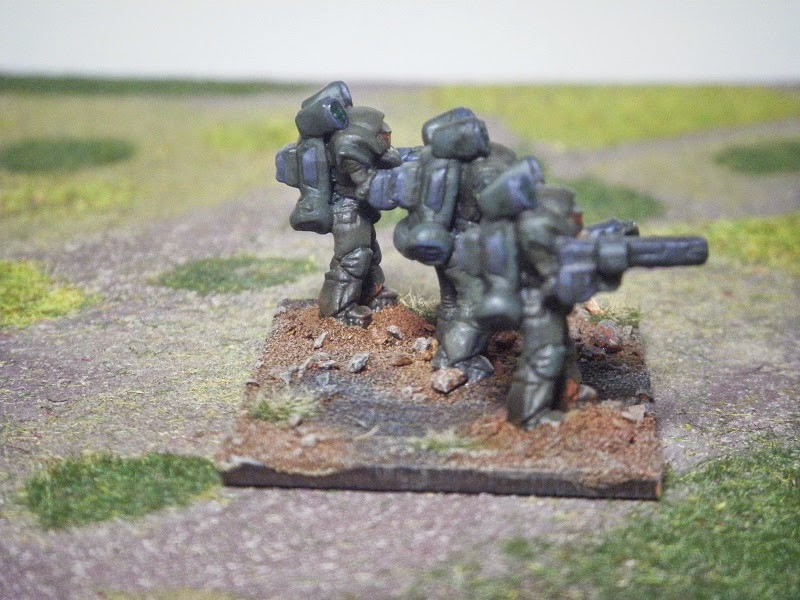 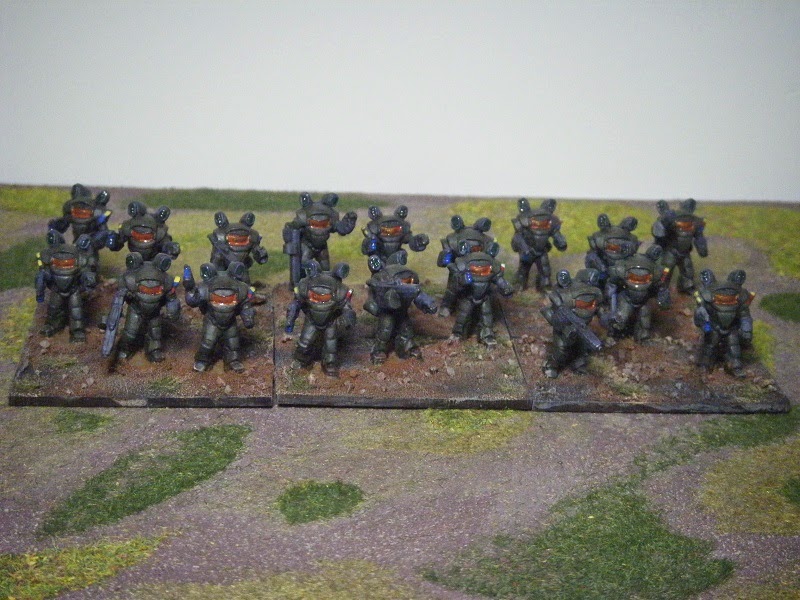 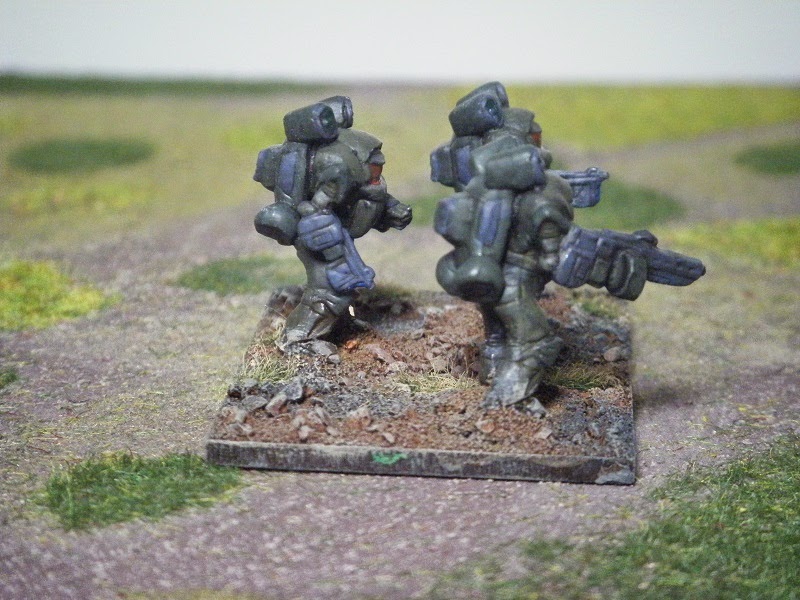 I will probably get a couple more packs of the support weapons to base up as specialists and maybe as all-SAW/plasma squads.

I do have about a company's worth of their non-power armoured comrades to paint up at some point. I am tempted to try painting them all up for next Saturday...

So, 42 figures should give me 84 points. I won't be greedy and ask Curt to take into consideration that they are much bigger than standard 15s.

Very cool figures Tamsin. I have an ancient copy of 'Gruntz' in my rules library and should give it a perusal as I have a lot of these types of figures kicking their heels doing nothing.

I quite like the fellows with the white ('please, shoot me') coms modules on their jump packs. They are probably issued with preemptory wound badges. ;)

These guys won't need much introductions, some good old greenskins with bows. They would have been quite boring alone, because you all have seen them week after week, so I decided to add some scenery. No more white background, enter green background with cardboard buildings! Yes, the buildings are quite elfish, but these greenskins have most likely conquered them. I believe the buildings are genuine GW products from the same era as the figures. I don't really know, I bought them few years ago and they were old then.

First two more goblins, again with unique hoods. Left one looks little bit like a stereotypical cartoon native American, the right one is simpler with a black trim. 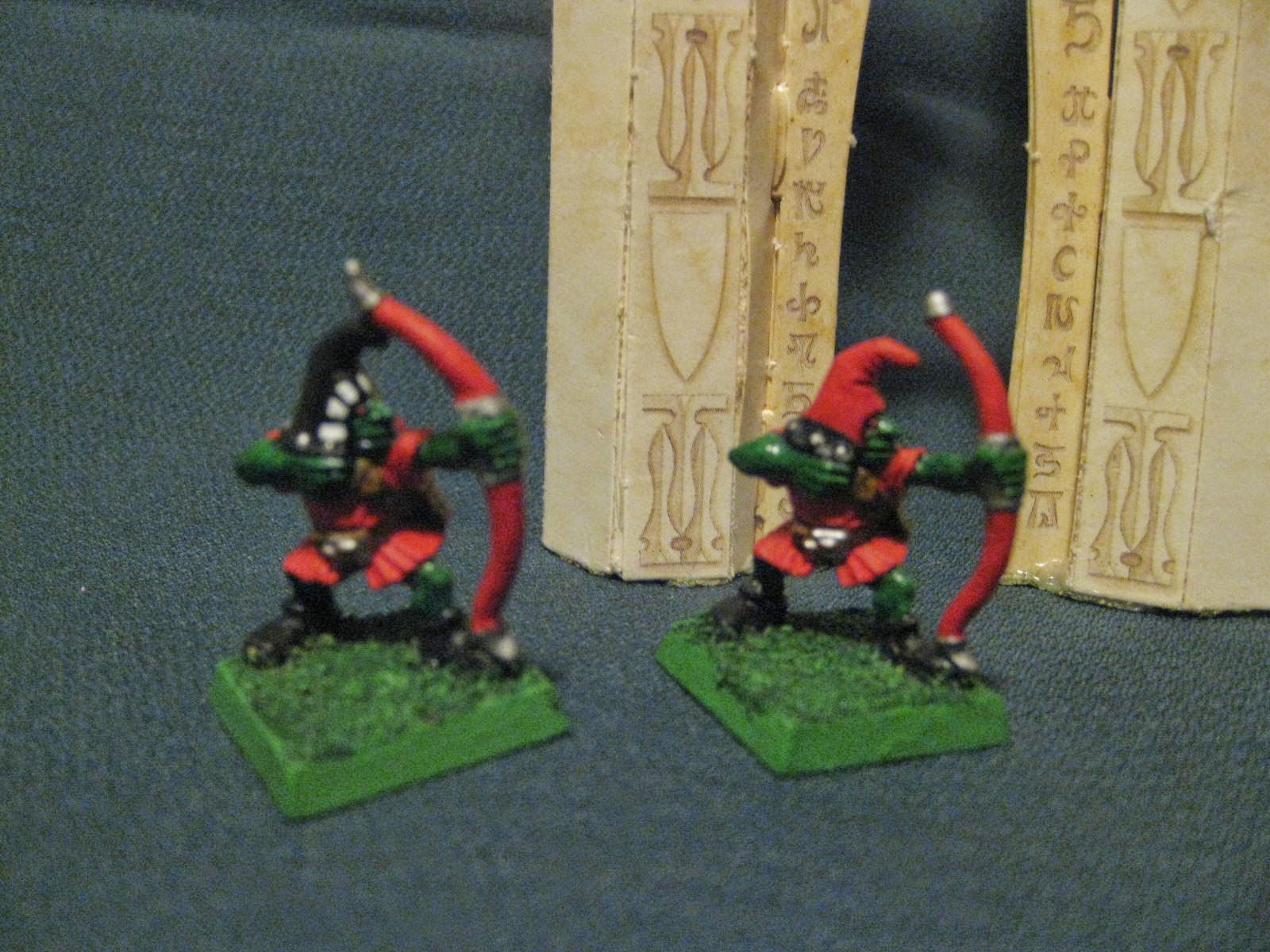 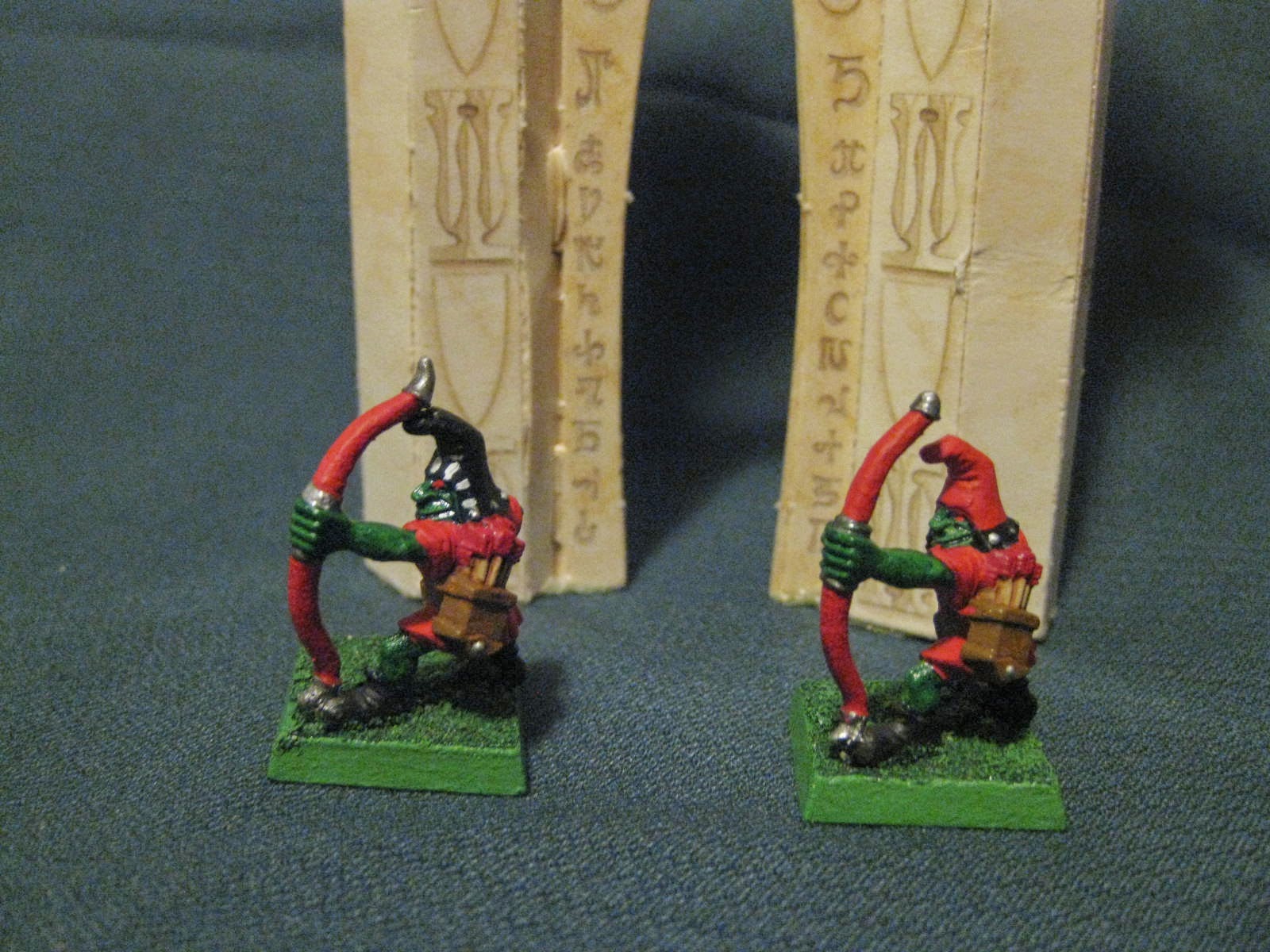 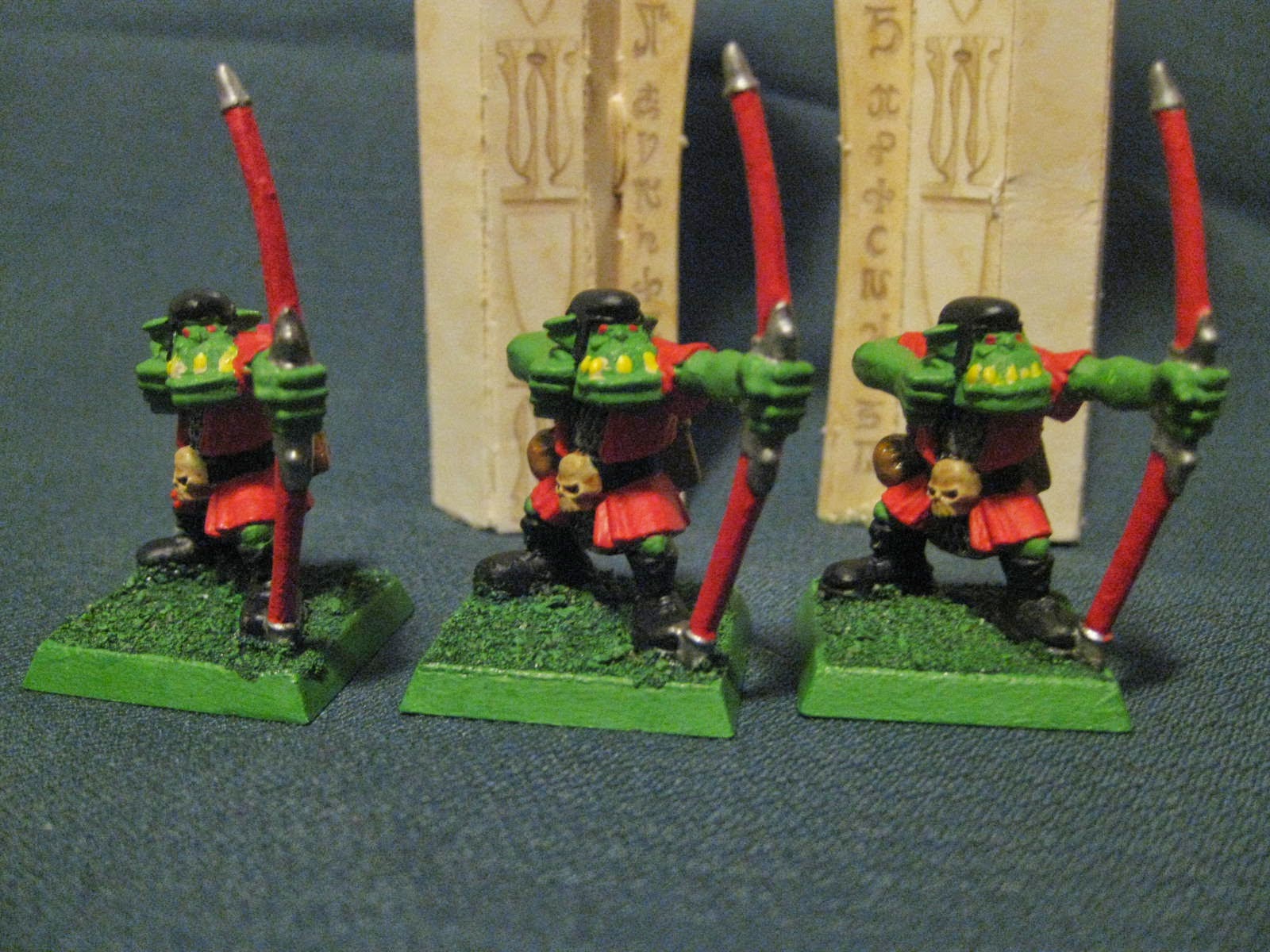 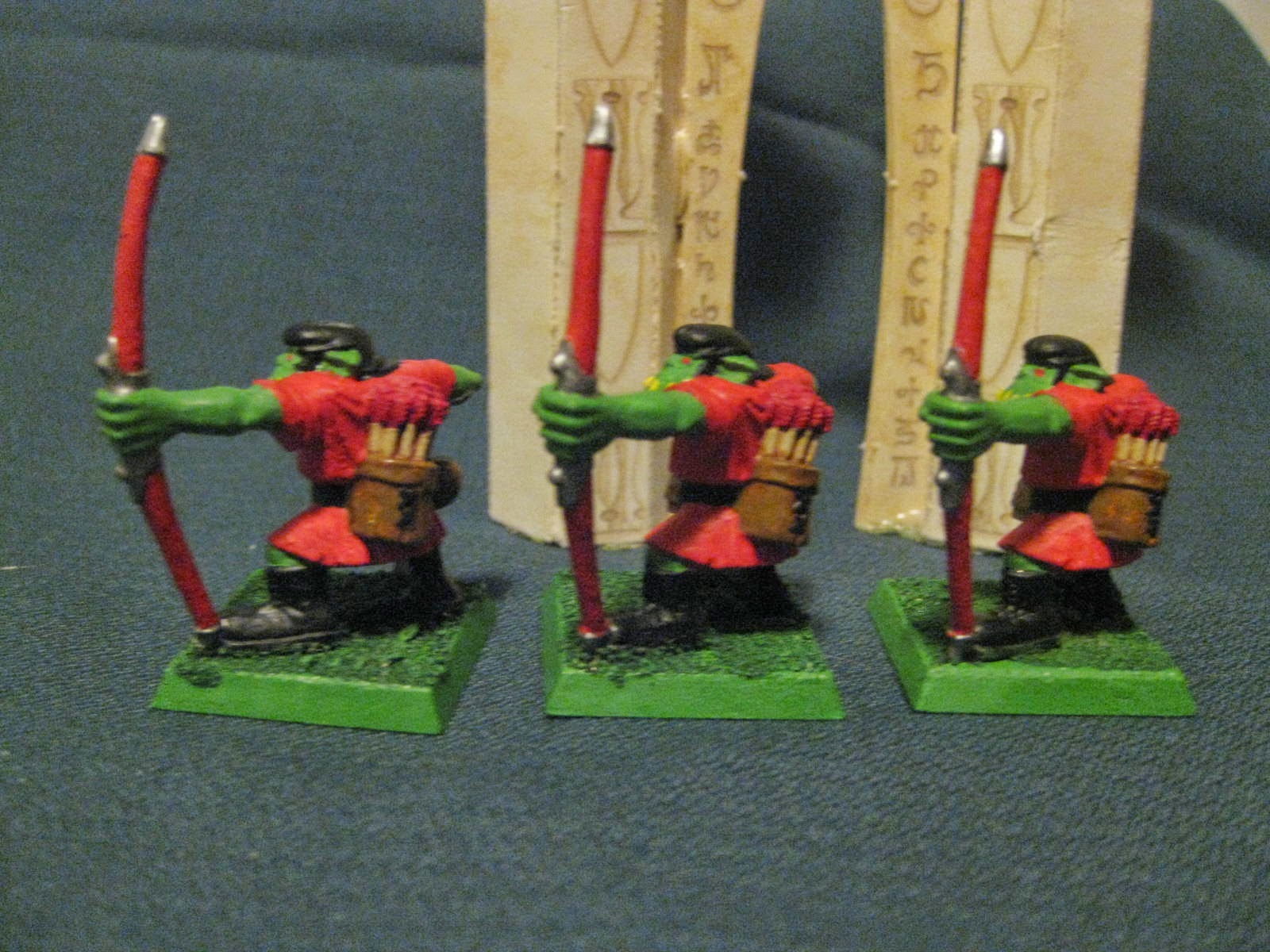 Group shot of all the five between buildings. As you might have guessed, these are the last ones I have. I do have some close combat orcs and goblins still unpainted, I hope to give them some attention during this challenge. They are not next in line, I need to paint something else first. 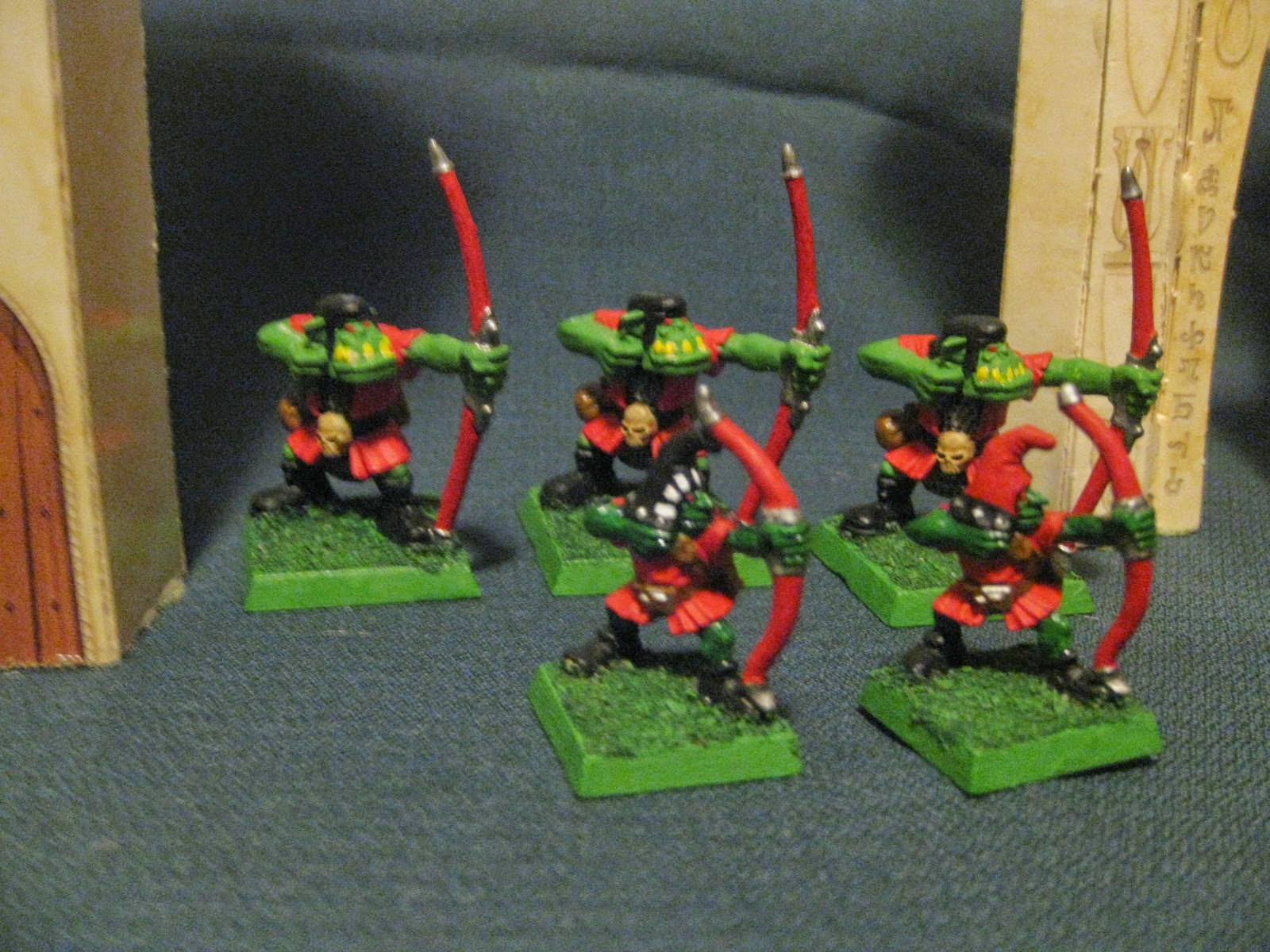 And then last one is a bonus picture, all the orc and goblin arrers I have painted during this challenge (and 5 old ones in the back row, which I painted years ago). Starts to look like an army, eh? 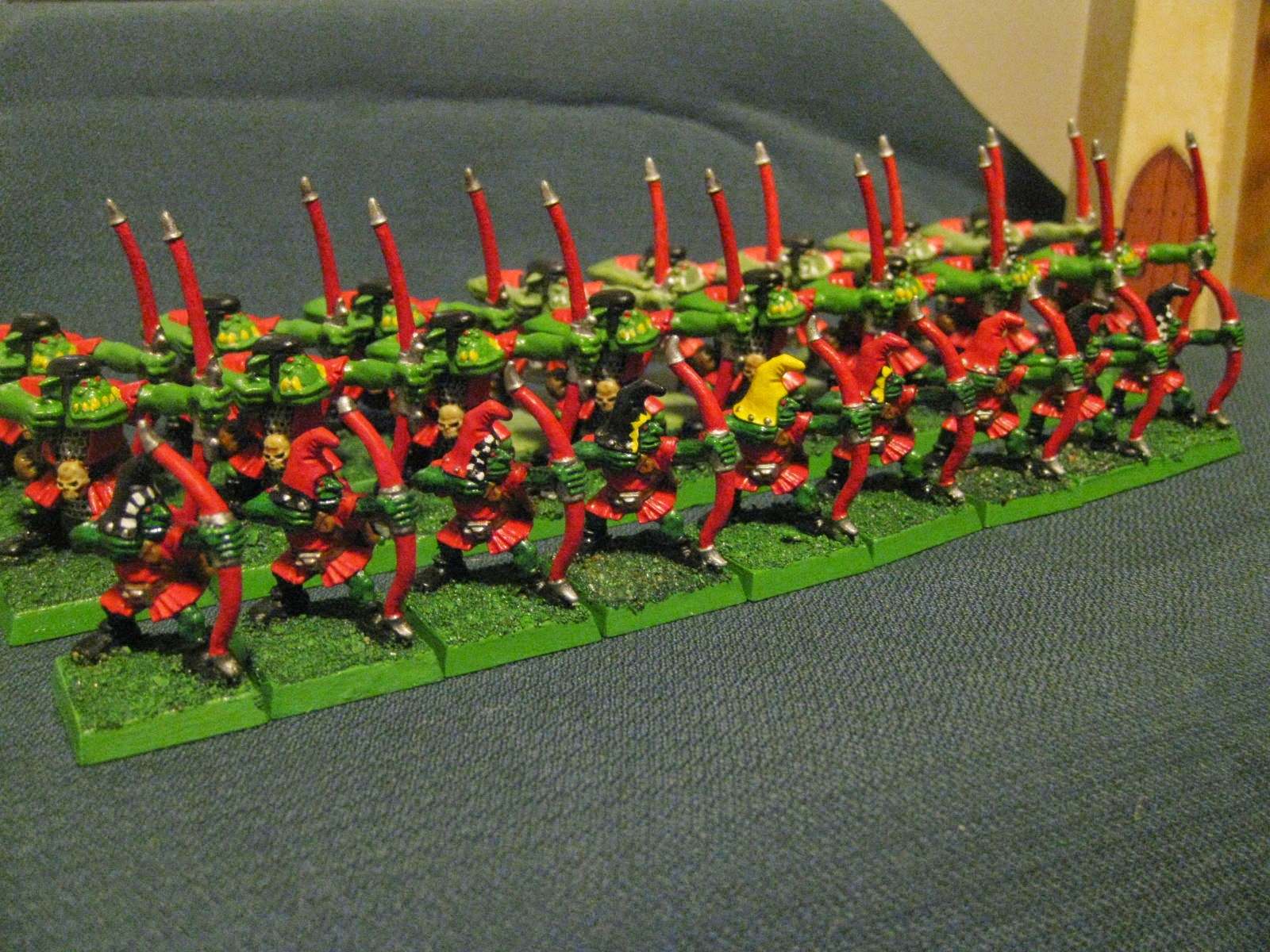 Excellent work Teemu. This little side project of yours has taken a lot of us back to our first years in the hobby - right down to the bright red bows, patterned hats and sawdust basework. Wonderful stuff! 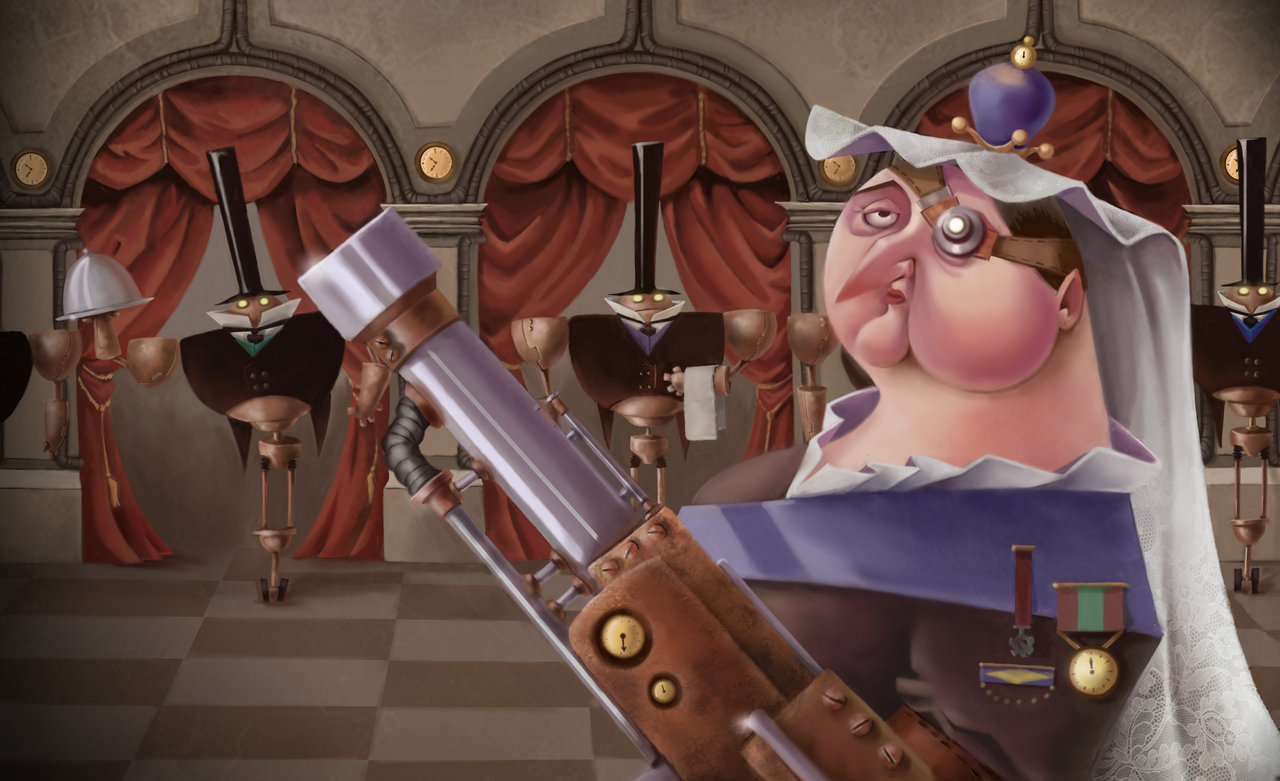 Below is the new roster after tallying the points from the 'Victorian' bonus round. I've been playing with different ways to display the rankings. I like the look of this one but tabulating and logging it hurts my noggin. Anyway, my thanks to all the participants who submitted entires - it was a great round.


Finally, just as a reminder Saturday (today) is the deadline for submissions for the 'Myth' theme round, so remember to get your submission in to me as tomorrow is the posting.