Well, that is the end of another year's challenge, with some fantastic painting and great community from everyone... I'm just a bit sad it is over and that I never got to all the things that I wanted to finish. Sadly work and life got in the way again. Maybe next year I'll just book off all of December or January and lock myself away to only paint. I'm sure I said that last year...

Another thing I said last year was that I wanted to actually have one project to work on for this year's challenge.

The challenge-end collection looks pretty impressive when it is gathered together like this. Sadly we're in the middle of decorating, so taking more photos won't be happening any time soon. Anyhoo.

The projects that ended up being worked on were:

1) Dungeon Saga - This one was about 5 figures shy of finishing the core box. Unfortunately every time I started painting these 5 I lost all inspiration and had to move on to something else. On the plus side, I did also cross off lots of additional figures from the KS including the critters and demons. Must try and finish those last 5...

2) WW2 Germans - This little group of figures were prepped for last year's challenge and were never started. It was nice to get them done this year so I now have 3 little starter forces for Bolt Action. One day I may even get to play a game somewhere!

3) Shadows of Brimstone - Some more creatures were crossed off the Brimstone list. There are still some left, but we're getting there. I may even finish the core boxes before the rest of the KS arrives...

4) Zombicide - I had a pile of zombies (normal and Black Plague) all undercoated for this year as they should have been quick to blitz through in the B&W sheme... but I forgot. Thankfully I at least got the crows done

5) Wild West - This was a new project that I never really intended to start, but shortly before the challenge we got to play the Fistfull of Lead demo at a show and too many ideas for terrain clicked in my head. It helped that some ideas for the side challenges fitted with this theme.

6) Saga Vikings - These were one of my secret santa presents from last year and something I'd wanted to do for ages. I'm really pleased that this one got finished as I now have a playable force that should work reasonably well.

7) War of the Roses - I thought this project was dead in the water, but this year's kind secret santa reignited things and another unit appeared on the painting table.

8) Pulp - 7TV figures are always in the painting queue, so for a few to sneak in is no real surprise.

9) Frostgrave - With all the other fantasy bits in here, how could we forget the Frostgrave side challenge and the extra figures painted for that?

That "one project" thing didn't really pan out did it? Must try harder next year!

There has been an impressive collection of beards on show from most people involved. This me and my beard from my work profile photo...  Can't remember what was on the ipod, most likely Curve or PWEI. It is about the only one you'll ever see of me as I hatehatehate photos of me :) 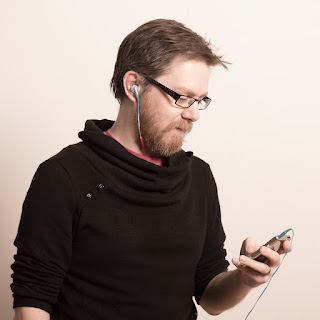 Onwards and upwards to the next challenge!

Posted by Endtransmission at 11:31 pm 14 comments 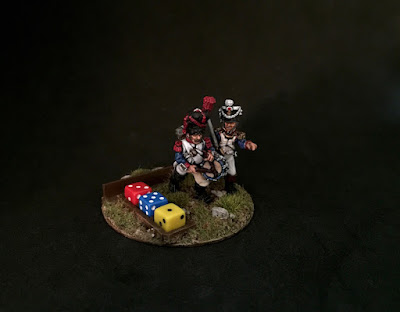 I've known Byron from waaay back. Back to when I played (get this) the GW Fantasy tournament circuit (!) and he ran his own Rogue Trader series (the excellent 'WarCons'). Byron has been a Challenger since the fourth edition and, as many of you know, has exhibited some of the finest painting seen in the Challenge over the past three years.

This year I was a bit in the weeds with the administration of the duels, but Byron came to my rescue by offering to take them off my shoulders. I know it's been a bit of a struggle for him as he was not involved in the initial negotiations detailing the nuances of the various duels, but he's done a valiant job in maintaining the roster, keeping it updated, so participants could better focus on their targets.

A few years ago Byron began to tip his toe into collecting and painting 28mm French Napoleonics. He's now at a point where he can field a small infantry brigade, so I invited him down this weekend to get them properly thrashed on the tabletop (really, what's a 500k drive for a wargame amongst friends?). With this in mind, I thought I'd make him a casualty/status stand to add to his collection of Grognards.

Seen here is a French line officer haranguing a grenadier drummer to keep up the tempo. Both are 28mm figures from the venerable, but excellent, Foundry range, sculpted by the Perry's. 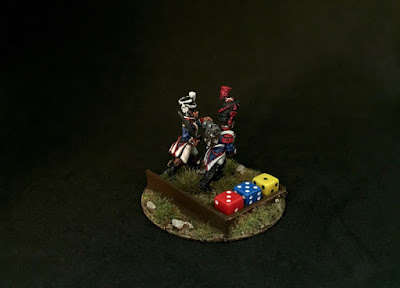 Similar to my other unit stands I've created three sockets on the base to fit small dice to track unit status and a fin that can fit a unit identification label. It's pretty rudimentary stuff, but it seems to work alright and I find looks nicer than 'bare' chits or dice cluttering the tabletop. 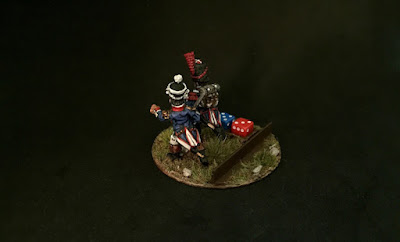 Here are some examples of previous unit stands with their ID labels and how one of them looks with a sample unit (the small greyscale marker is to track things like 'Fatigue' or 'Disruption, depending on the system).

Examples of unit stands from my collection. 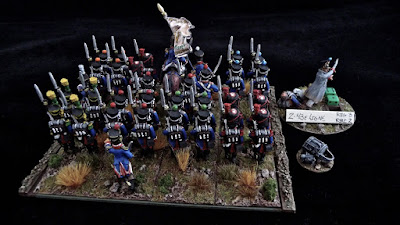 Thanks very much for all your help Byron! I hope you like these lads - we'll get them on the table with your boys later tonight for a bit of mayhem!