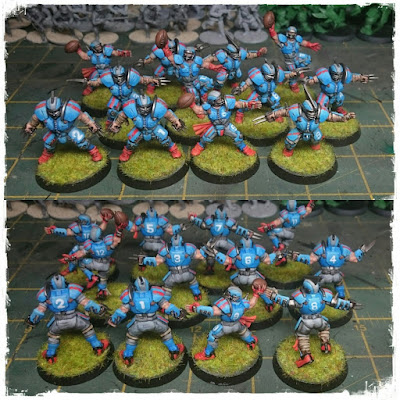 So last week I hit the painting hard with some easy to do pieces that took no time at all to get done. Mostly cause they were full RnF, or were for someone else that wanted cheap, dirty and done.

But then I started in on these guys.. and knowing that they are for me, and for the upcoming league, and also knowing that I would be facing off against some other great painters perhaps in 2017.. I needed to step up my game and do a much better paint job!

So some research was made on some likely colors that could be used for it. I had a few in mind; Dallas Cowboys.. Oakland Raiders.. and then it hit me.. the flashiest team out there.. the Miami Dolphins! Mostly cause I wanted to paint Orange for some reason, and they are the only team to have Orange. And this was decided before the rest of the Canuckalheads here suggested their local teams in the Prairies ( wish I had waited.. a Green team could have been interesting! ). 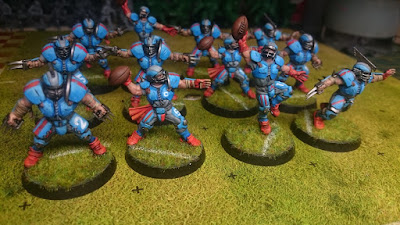 I had done one test model first, and then jumped into the batch painting. But I can say that it was a slog to get through this batch of models knowing that I needed to be doing a better job with them than I normally would do for gaming pieces. And there are still a few places I probably wouldn't mind going over and fixing, but for now they are considered finished. 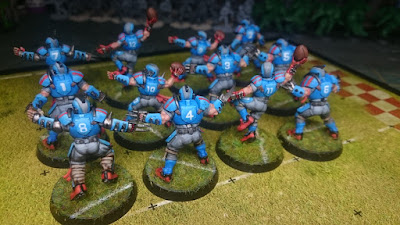 I did not see any number transfers in the box ( though to be fair I haven't looked too closely after taking the models out ) so I am not sure if there are any to go with them to make it easier. But as it was I wanted to do all the team and number markings myself on them as a challenge to see if I could do it. I think for the most part they came out OK. I realised at parts that I was too thick or heavy handed for them, but overall I got through them. Same with the lines on the pads. Some are thicker than others, but overall the effect sits well on them. 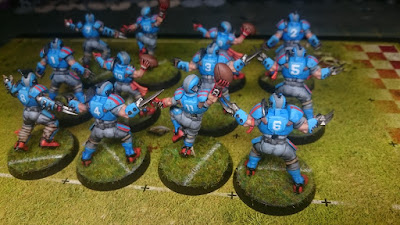 I tried to make the back portions of them look the best, and clearly visible for numbers as I suspect that is what I will see more of.

The line markings on the grass were a last minute thinking idea.. not sure they fully work, but they do well for now. I am in-between if they should have a bit more to the bases or not. Maybe grass clumps, dirt, or even some blood? I know Roman did a short tutorial on his he did his for a showcase version of a Skaven, but not sure how well that would translate for gaming figures that will get a lot of punishment over the coming calendar year!

So yeah.. 12 models that are in a more heroic 28mm scale.. and a lot of Bolt Action models to be tackled now. Which means hopefully a huge sandbag worth of points to come! And another army or 2 ready for the new BA season to come! Some of which you can see in the background of the above photos!

66 points to you, sir (including a bit extra for the team numbering)!

With Christmas over and the tour of relatives done it's time to get back into painting. About 700 years into the future from my last entry with a set of PHR starships from Hawk's new Dropfleet Commander game.


Spaceships have always facinated me and I did love Battlefleet Gothic back in the day and have been playing X-Wing and Armada in the last few years. So when Hawk announced their Dropfleet Commander Kickstarter I immediately had to put in a pledge for a couple of fleets. With the Kickstarter being massively popular (around 550k gathered just from the Kickstarter and a lot more from late backers) I wasn't too surprised when they didn't make their original June/July goal. With packages starting to ship out in late September I was hoping to get in early, but apparently Finland wasn't too high on the list and I only got my package a few days before Christmas as did most other guys here that I know who participated. 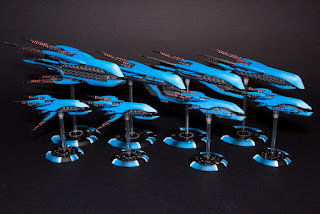 I'd caved in already in November after seeing painted ships popping up everywhere and ordered two PHR starter fleets as I was only getting a small force of them from the Kickstarter. I finished those a few weeks ago and now that I have my Kickstarter loot it was time to paint up some reinforcements to allow me to play full sized games.

What we have here is the Kickstarter exclusive Battlecruiser Leonidas alongside one starter sets worth of ships, 3 Cruisers and 4 Frigates. They are pretty darn massive with even the small frigates being slightly larger than 28mm infantry and the Battlecruiser being the size of a smaller 28mm tank and clocking in at about 15 cm length. No idea what points they should yield, I'll leave that to our gracious Snowlord Mr. Campbell. 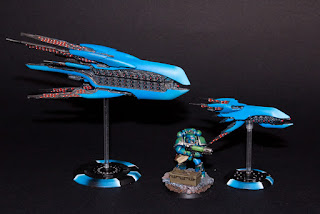 These ships are pretty darn big!


PHR seems to have two different playing styles available to them. Most of their ships have enormous broadsides and fight a bit like sailing ships did. On the other hand they also have the best launch assets in the game with very powerful bombers. Originally I felt drawn towards the broadside way of fighting, but after a few test games it seems very tricky getting it right, so I ended up building a few more carriers for the force from this third set of ships. 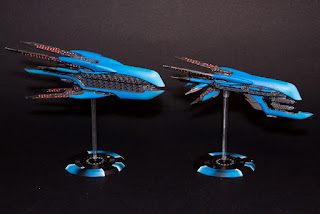 
Paint scheme wise I tested out multiple different ones trying out different camo schemes, hexagon effects etc. before finally just settling for a clean airbrushed blue surface with light modulation with lighter blue towards the front and back ends of the ships. With large clean surfaces it just seemed to work much better for me. I might still try some decals on them, but have yet to find nice looking ones. Tau decals from GW seem pretty nice, but I still need to source some to try them out. 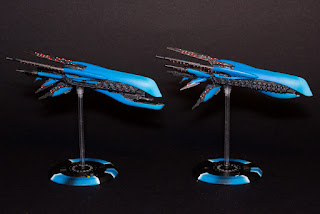 
They take surprisingly long to paint up. The airbrush phase is actually pretty fast only taking a few minutes per ship, but boy is it hard to get metallic paint into every nook and cranny as there's just so much small raised detail everywhere. Even now from the close ups I've noticed I actually missed a couple of spots on the Battlecruiser that I have to go and fix. And with the metal parts done picking out the tens of 'Gravity nullifiers' on those positioning wings is a pain in the a**. Still it's definitely worth the extra effort to make them pop out, even if it meant that most of the painting time on these goes into such a small thing. 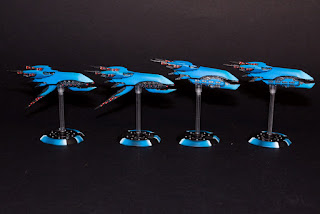 With these out of the way  it's back to Flames of War. The missus is out of town for a few days with our little warhound so I have the house all to myself and some quality painting time ahead of me. No interruptions outside of a Dropfleet game scheduled  for tomorrow so I'm hoping to be able to crank out a couple of more entries this week.

Terrific work Samuli!  Your airbrushing really did a lovely job on these ships - That blue that you've used is very sharp. I'm a Star Wars: Armada man myself, but I'm quite taken by the sweeping elegance of these ships. I particularly like the long fins that you've highlighted with the orange running lights.

I'm going to score the smaller frigates and strike carriers as 5 each, the Vanguard Carrier and Light Cuiser as 7s and the larger ships as 10s. So that comes to 54 points. Well done! 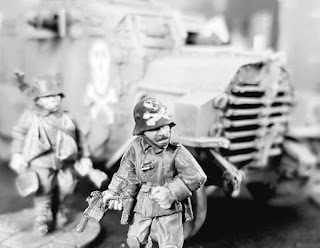 Following on from my Spartacists for the German Revolution, here are 29 Freikorps figures to ruthlessly suppress them. Figures are from Great War Miniatures, and I thoroughly enjoyed painting them. The details on some figures aren't really right for Berlin in 1918-1920 (there shouldn't be any gas masks, for a start), but the figures with grenade bags and entrenching tools really look the biz. And I did carve the gas mask containers off some of the figures before cutting my thumb and giving up. 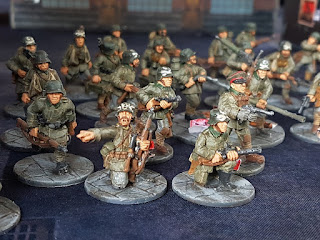 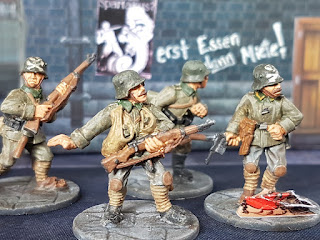 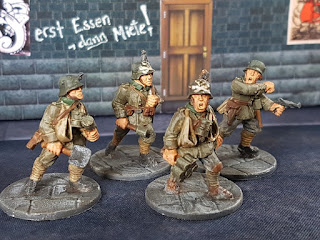 Just for the eye candy, I have included a wonderfully ugly Ehrhardt EV/4 armoured car, but this was painted before the Challenge. 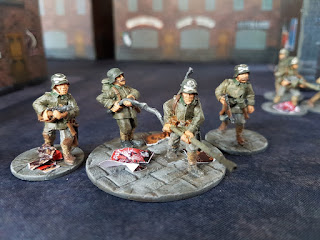 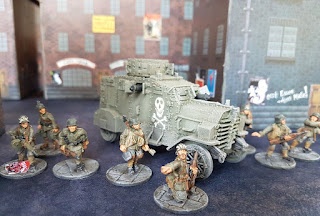 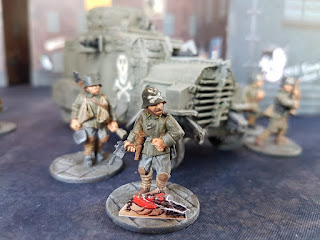 So that's 29 figures and 145 points, and about 1/6 of the way to my absurdly optimistic target.

Fabulous work Dux! The late war Germans form Great War Miniatures look great in this role. You did a great job freehanding the ghoulish skull and crossbones on their coal scuttle helmets. Sorry to hear about your thumb, but it was in service of your muse so hopefully it heals up well. Love the Ehrhardt! If anyone else wants one of these I suggest you go over to Alf at Barrage Miniatures - he has a wonderful casting of this brute.


Historically footnote: In a perverse way it's too bad the German revolutionaries didn't have better success in whittling down the Freikorps before they were stamped out. Several members of the Freikorps (Röhm, Himmler and Höß to name a few) became some of the most heinous personalities of the soon-to-emerge Nazi party.

This 28mm pre-painted plastic model of Charcoal is by “Wizkids” and can be bought as number 089 from their Marvel “Heroclix” Sinister range. Created to be a "Marvel Worldwide" comic book antagonist by Wallace and Kroja Frost, as part of a Wizard magazine "Create-A-Villain" contest, Charcoal would actually go on and join the Thunderbolts super-team, having initially been their enemy. The Burning Man made his first appearance in the November 1998 issue of "Thunderbolts", and was subsequently "killed in battle with Graviton" after the competition winner attempted to legally claim the copyright of the character from Marvel.
Initially undercoated with "Vallejo" Heavy Charcoal so as to eradicate the 44mm tall figure's disagreeable pre-paint, Charles Burlingame's alter-ego was washed with "Citadel" Nuln Oil and subsequently dry-brushed with more "Vallejo" Heavy Charcoal. I then 'picked out his rock-hard diamond growths using a combination of "Vallejo" White and "Citadel" Asurmen Blue. Finally his eyes were painted using "Vallejo" Heavy Red and "Citadel" Carroburg Crimson.


Great to have you with us again this year Simon. I always enjoy your posts as I learn so much about comic book lore.

I see you are still toiling away, perfecting your 'Black Period' paint style. :) I find these constants in life to be calming and reassuring, so I thank you. I'm definitely going to have to pick up a bottle of that 'Heavy Charcoal' as, we see here, it provides a wonderful highlight to black. I also like how the black and charcoal is contrasted against his blue diamond bits. A very striking figure.

I'm going to assume that Charcoal is on the heroic side of 28mm so I'll score him as a 40mm. Great job and welcome back Simon!