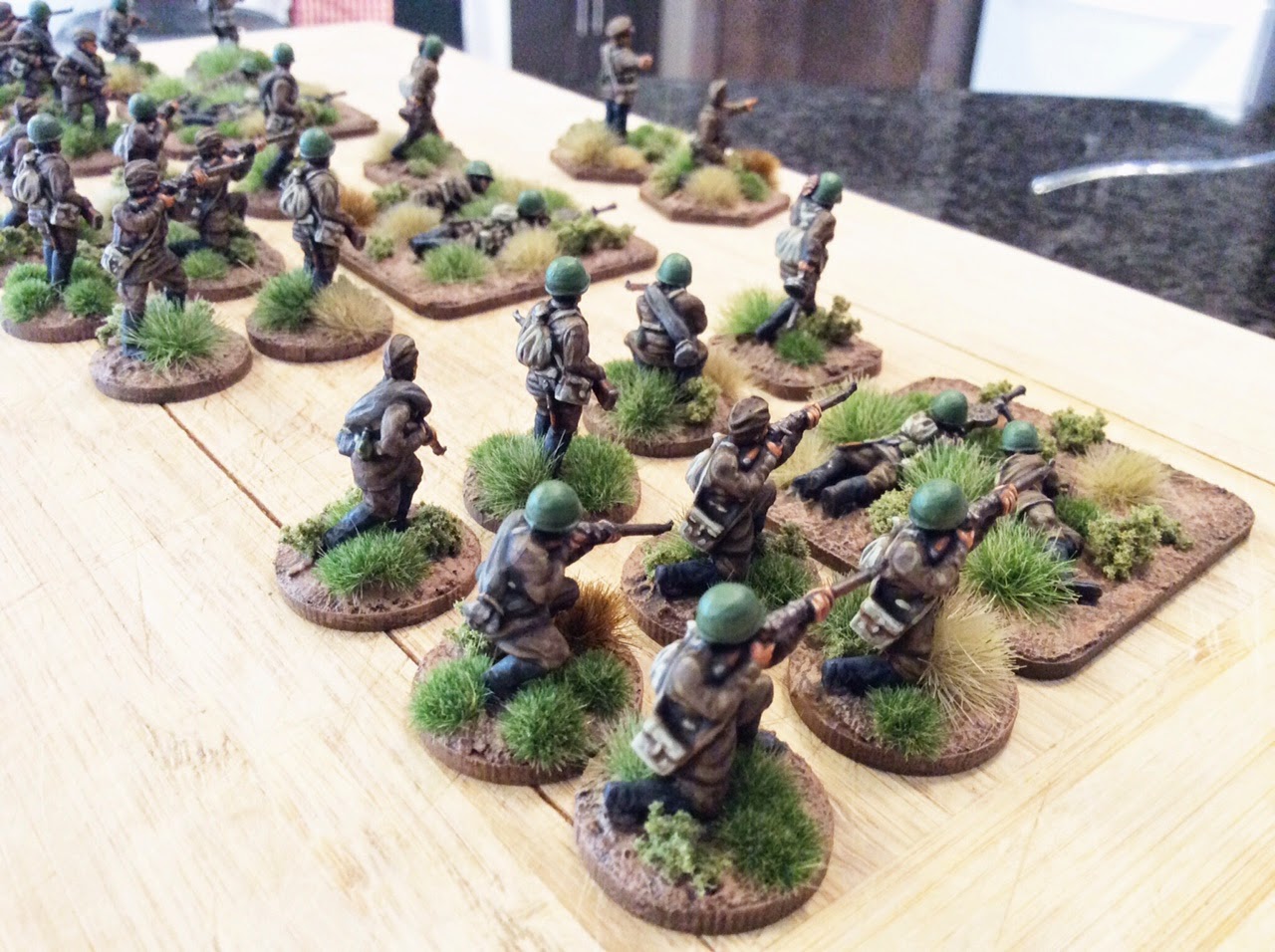 From DaveD - Return to the Desert Sands: 42nd Highlanders (190 Points)

The primary aim for this years challenge is the Imperial forces for the Sudan. With such an interesting mix of units there are plenty of interesting battalions and regiments to choose from. So first up it's a proper "grand manner" size unit of 36 foot (mind they can be up to 72 figures)  and a mounted commander. These are old school 28mm Connoisseur Miniatures sculpted by the late Peter Gilder and are among my very favourites to paint , even the tartan! They are quick and easy without too much fussy detail, and reward an old school wash and wipe using enamels for the base colours. Nice to get one of the tartan wearing units out of the way early. I have the Gordon's to complete too, but Perry miniatures for those so it will be interesting to compare them when they are done. 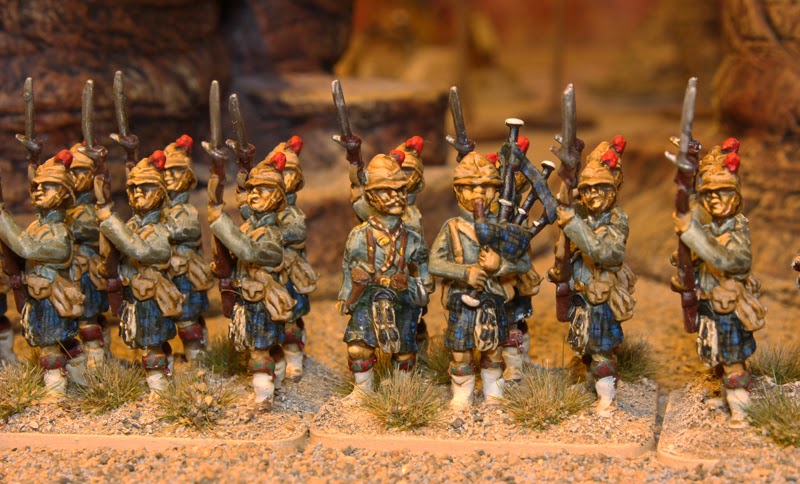 Well I can't leave Clint and Phil to the fezzes.. So here is a British commander as well complete with Fez or is it a tarboosh... Nah it's a Fez.. 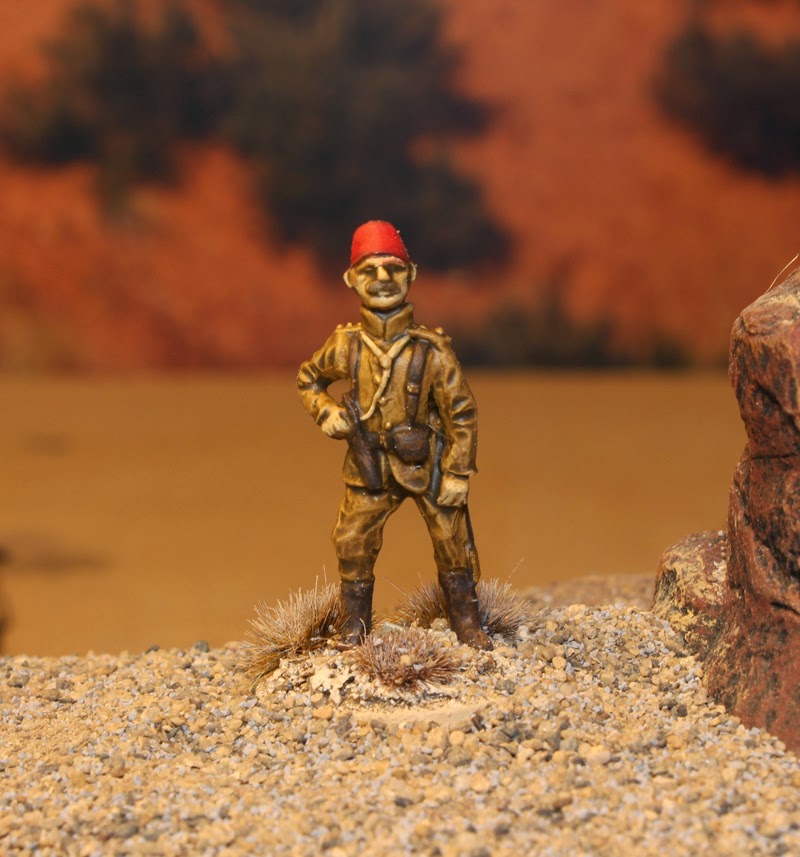 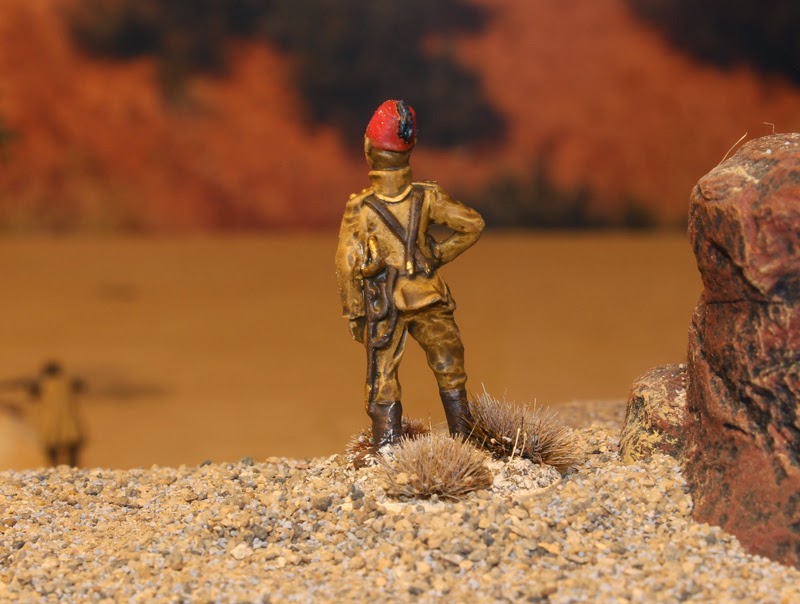 Cavalry or infantry next..maybe both..maybe some camels...must be time for camels to make an appearance in the challenge soon. The paint desk is awash with khaki.


What a stonking unit of Jocks - and our first Points Bomb! Wonderful work Dave. They look excellent all massed in line, heading off to some hot, uncomfortable fate. If you can, update your entry with a couple close-ups as I'm sure I'm not alone in wanting to better see these Sons of Scotland in all their kilted glory. Also, I really like the officer sporting the fez - I'm sure he special ordered it at Harrods...  ;OP

I look forward to the upcoming Gordons (or camels)!

From TeemuL - Starting with a Ringwraith (5 Points)

Lord of the Rings and Ringwraiths seem to be quite popular this year. I wanted to have something ready quite soon and because I happened to have an unpainted Ringwraith I decided to start with him. Of course I was not able to finish my pre-challenge miniatures before the challenge started, so I didn't get the start I hoped for. Window renovation project at home didn't much help with my schedules, the place is still a little bit of chaos and the fact that there is pretty much no sunlight available, makes taking photos rather difficult.

I was supposed to paint rank-and-file troops to get lots of models painted and gather lots of points, but it seems I need to start small and slow. I have started to paint my bonus theme figure, I need to get it painted in order to get the bonus points, otherwise I'm in big trouble. This is also my first time with Blogger, first time with this Challenge and so on... But enough of this, here's one of the Nine (even this finished, I only have eight...): 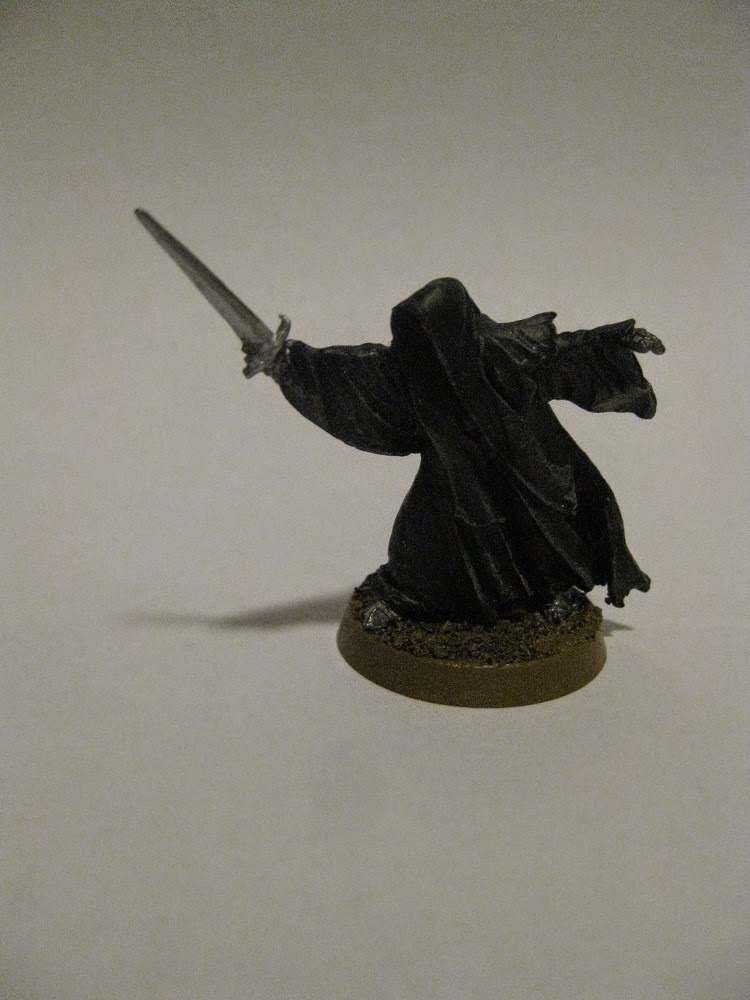 Anyway, I wanted to get my first points and open the challenge from my part, especially when I know there are not one, but two Christmas Parties during the next weekend... So there won't be much ready for a while. 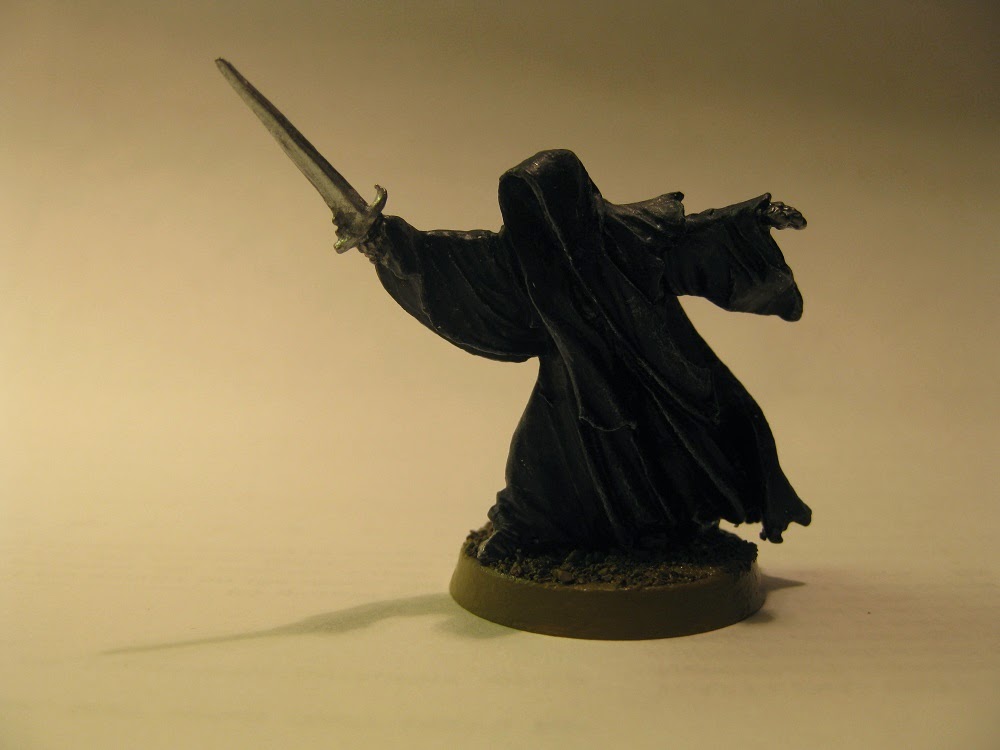 The painting is quite simple, lots of black and some metal. But it was not, I recently read "How to Paint Citadel Miniatures" book from 2003. I can now say with confident that I have used various techniques such as drybrushing, extreme highlights, some layering, overbrushing and staining to name a few. 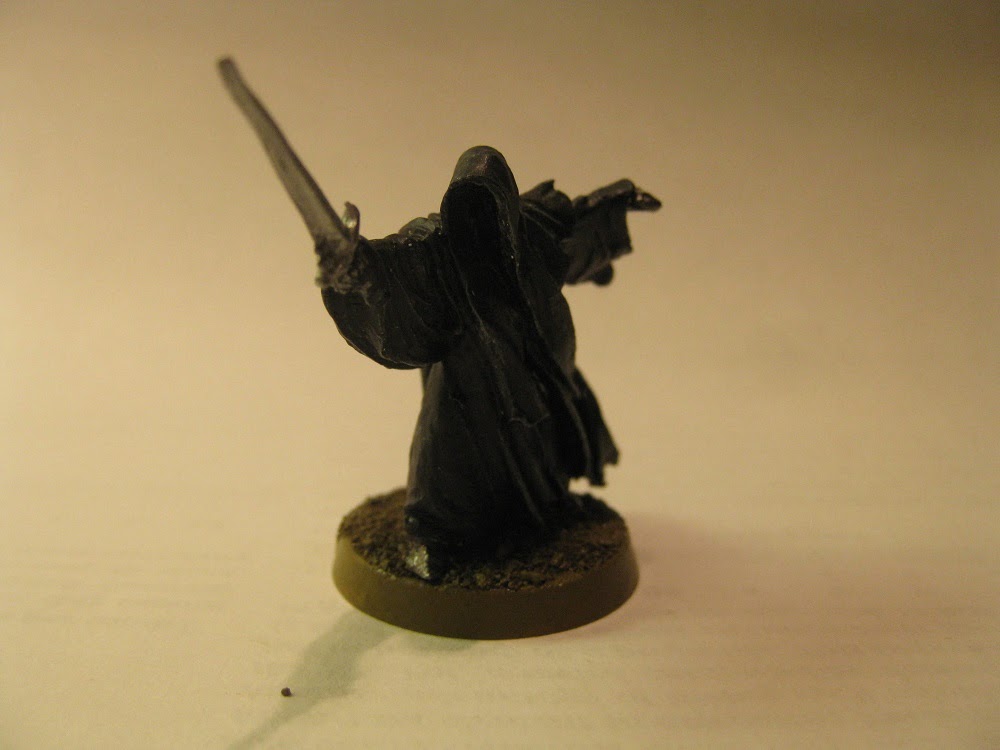 One 28mm model, that's 5 points to start the Challenge.

From Curt:
Welcome aboard Teemu! It looks like we're having a bumper crop of ringwraiths this year! It's too bad that this particular figure coincided with your lighting issues as we can't really enjoy your paintwork to its full advantage. He is cloaked in black, he has a morgul-blade and he is menacing so we're all good (or doomed). Nonetheless, it's great to have you out of the starting blocks and heading down the straights - once the dust has settled leading into the holiday season I'm sure your pace, along with everyone else's, will increase to a blistering tempo. :) Well done.

Email ThisBlogThis!Share to TwitterShare to FacebookShare to Pinterest
Labels: 28mm, Fantasy, TeemuL, The Lord of the Rings 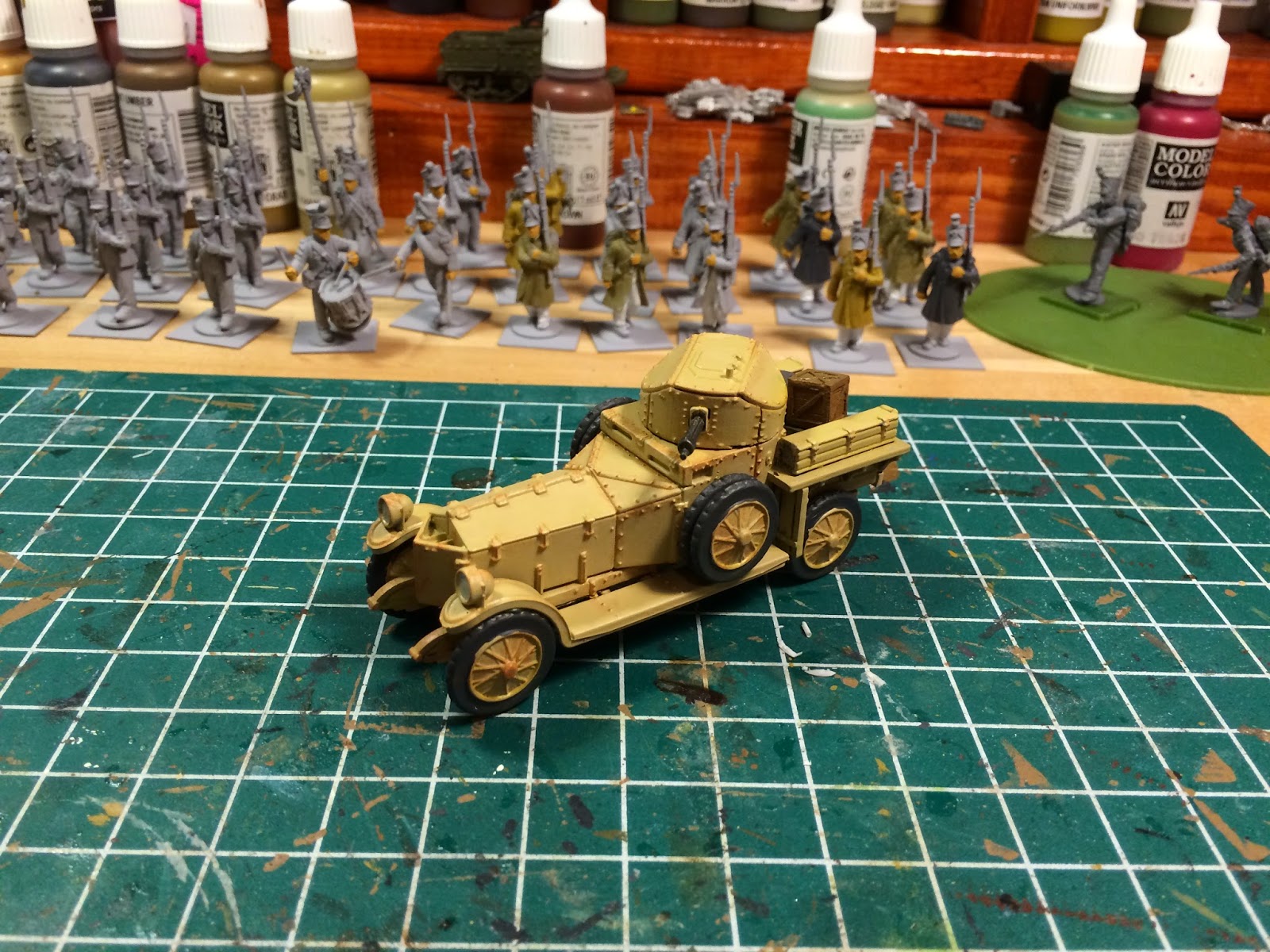 Submission #4 is a 28mm Scale Rolls Royce Armored Car from TrenchWorx.  I picked up this kit (along with way too many others) from a Kickstarter that was recently run by the Trenchworx guys.  These models are resin casts  made from 3D printed masters.  Both the details and casting quality are amazing and I highly recommend their products. 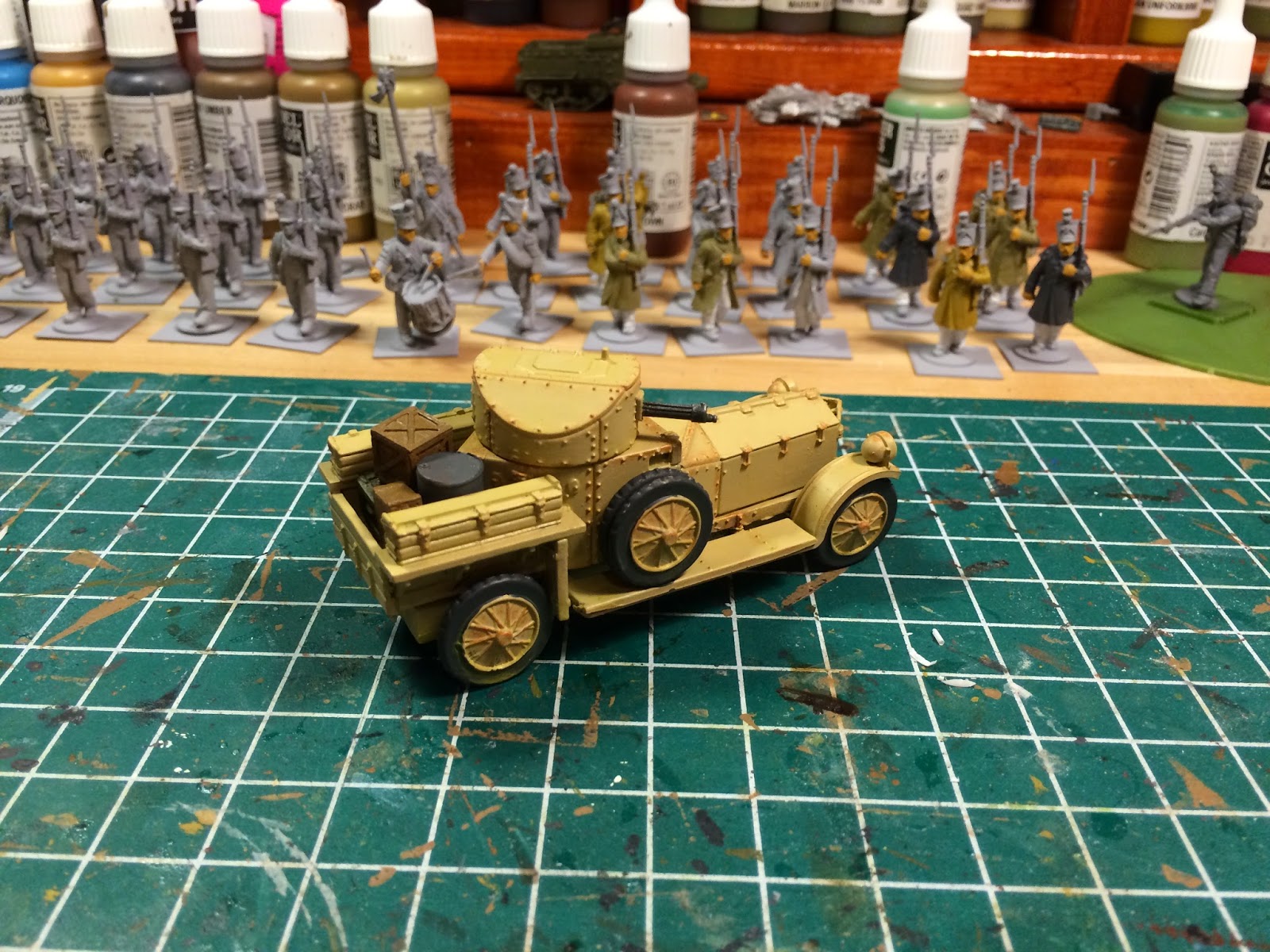 This particular model was painted up in a fairly generic way and has no nationality markerings.  I'll be using it for inter-war pulp (skirmish) gaming and it may even see it's way into a Bolt Action game or two. 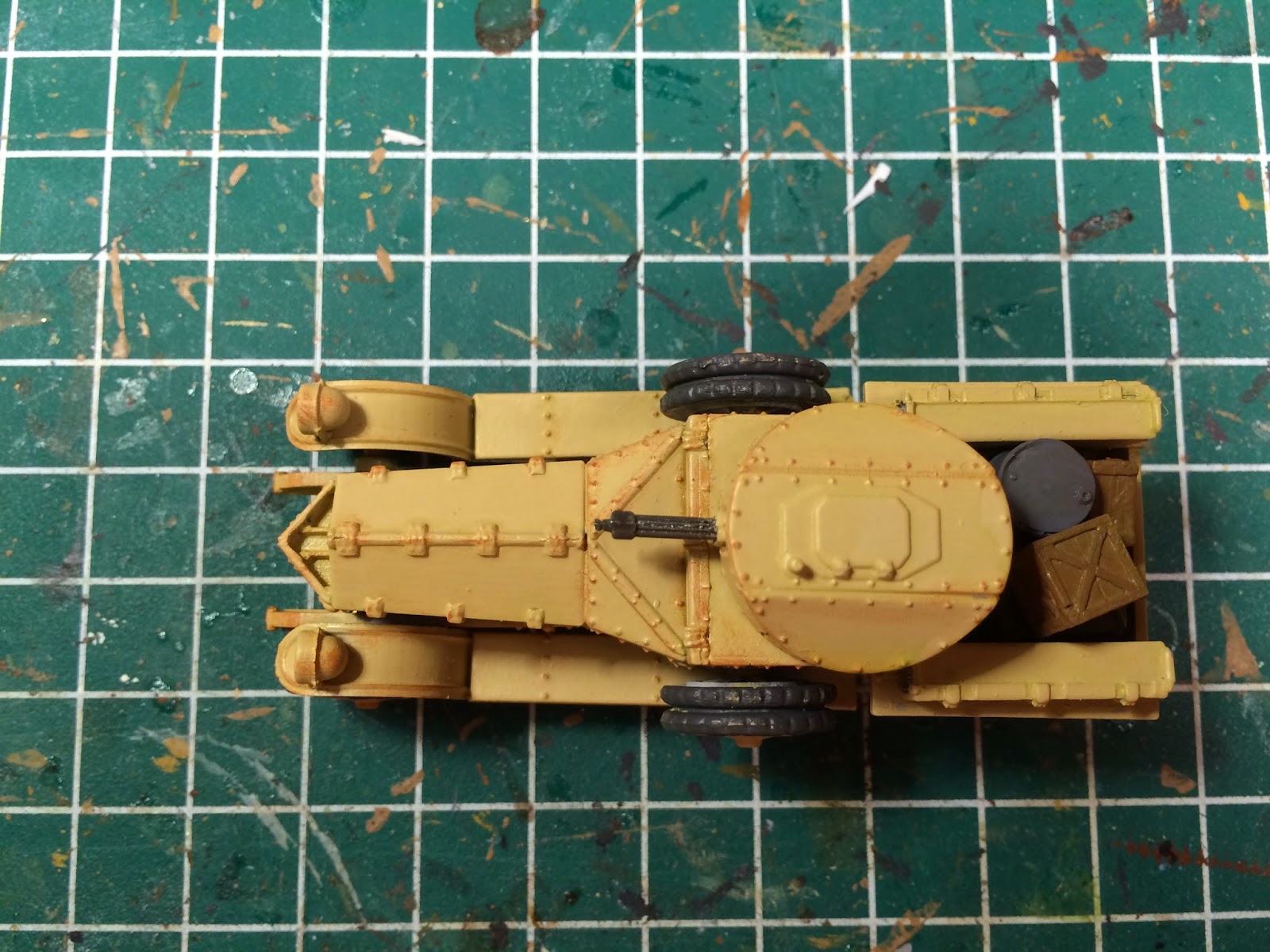 The stowage in the back are custom cast by your's truly and are hold overs from my model railroading days.  They're actually HO scale (1/87) but seem to look good in a 28mm (or 1/56) scale vehicle.  The casting are pretty horrid and only work where I can hide some aspects of them.  One of the great benefits of the Challenge is it does force one to use old inventories of modeling supplies! 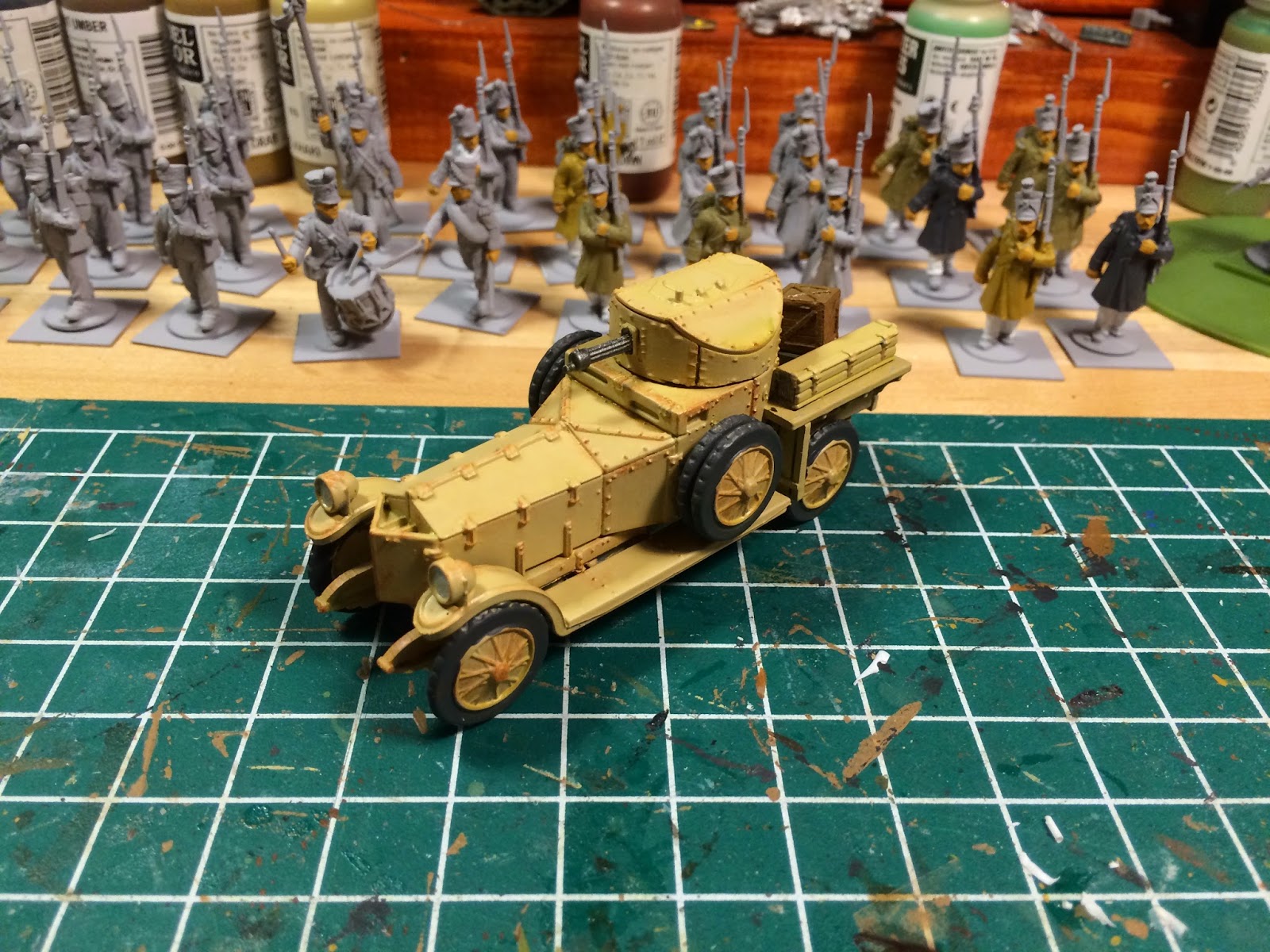 You can see in the background one of my next projects for the Challenge - a 36 figure Napoleonic French infantry battalion (Perry plastics).  After doing loads of American Civil War figures, I forgot how intricate Nappy uniforms are.

I think the Rolls Royce Armored Car should net me 15 points towards my tally!


Beautiful work Miles on one of the most elegant armoured cars of the period. I too just received my parcel from the Trenchworx Kickstarter and hope to have at least one of their models up for the Challenge in the coming months. I agree with you: the quality and detail of the models is really top-notch. I fiddled about and did some dry-fitting of the models and everything fit together seamlessly - very impressive. My only caveat to the models is their price, which is a bit eye-watering.

In regards to your Rolls I love the base sand colour you went with as it really helps to make the rivets, plate-seams and creases pop. I also really like the stowage you added as it really adds character to the model. My only suggestion would be to dirty up the tires, undercarriage and running boards, as from seeing photos from the period, these buggies would get incredibly filthy in the field.

From GillesW - Unity through paint! (20 Points)

Firstly as last year, I chose to pay the entry fee.

I went to my lead pile and took the assassin from the Lead Adventure range and a base from Micro Art Studio with an idea in mind reworking his face to have a plain mask to fake the logo of the Vth challenge.

I hope it will give the feeling I searched. 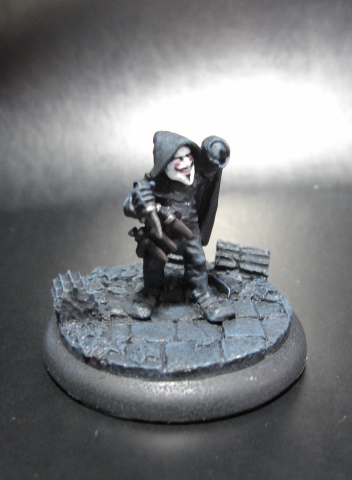 An Anti hero hiding in the shadows of the underground. 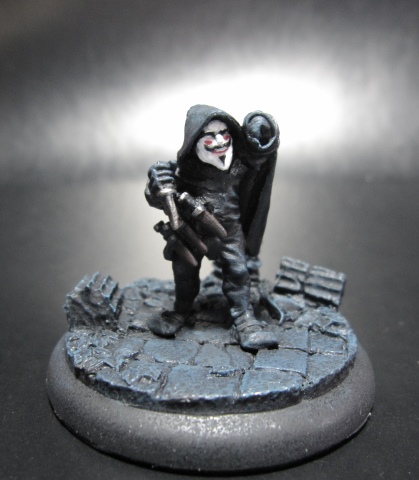 A back view of him returning in the shadows. 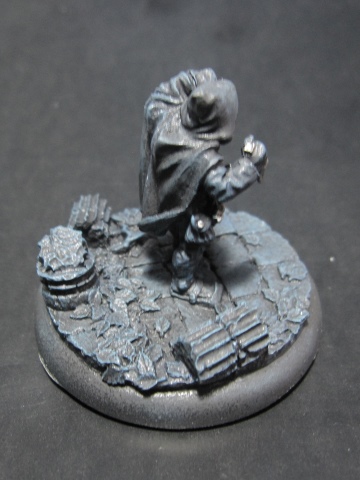 The first time I tried a blue grey and black style any comment will be appreciated.

From Curt:
Ahh, wonderful work Gilles! I love how his mask shines out from the greyscale background - an excellent effect. And the face, did you sculpt that yourself? It turned out brilliantly. Thank you so much for the wonderful figure.

Posted by thefrenchjester at 2:56 am 21 comments