I take off my hat to Curt, his minions and my fellow challengers. Challenge IX was epic - with some marvellous miniatures, artistry, humour and motivation. The final collective points total speaks for itself in terms of reducing the weight of lead in our mountains.

This is the first time I have managed to drop 200 quid on a specific group of miniatures for a specific time-bound project and then had the discipline to paint them all. The AWI project started three years ago - shortly after I restarted my long dormant miniature painting habit (addiction?) after watching the War & Peace remake. Having tested my brushes on some Napoleonic Russians I searched for a conflict that would not be Napoleonic - since my brother was inheriting the family 25mm army. As an immigrant to the US and now a citizen the Revolutionary War made the most sense. 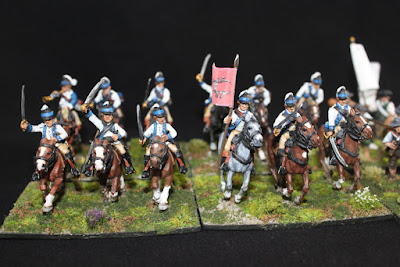 While the AWI made up the bulk of my entries I did find time for 3 infantry battalions and a half cavalry regiment of 25mm Minifigs.  The family army ended up with me after my brother’s passing in 2016. Which brings me to fellowship - the theme of this year’s challenge and a constant in the hobby. My brother introduced me to wargaming and through wargaming to the boy who became my best friend for life. I have made many friends through the hobby since moving to  the Pacific Northwest. I’m not that far away from being able to refight Waterloo with the Minifigs - especially now I have made a start on the Prussians (for some reason this battalion was my favourite entry to Challenge IX). I miss my brother a lot - but I think he’d be happy to see the new additions. 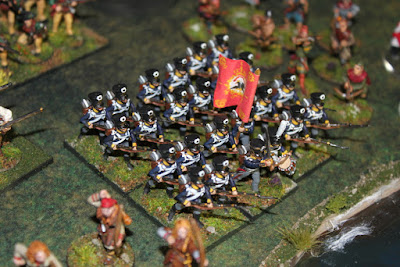 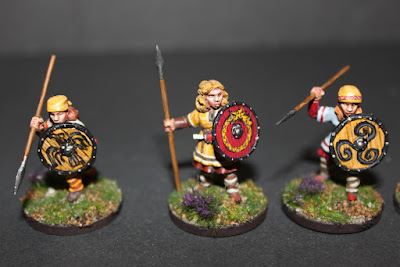 Since I painted zero female miniatures in Challenge VIII I bought some shieldmaidens with the intention of completing a Viking army for SAGA. Intentions shmintensions. Eight of them ended up getting painted. I was especially happy with the one in the yellow dress and gripping beast shield. Five more of them received some paint but not enough to submit an entry so I can’t even save them for next year.

The other SAGA army that saw only a pitiful expansion was the Normans. I primed a whole box of Conquest plastic knights, a dozen Old Glory metal knights, a dozen archers and the crossbowmen. Only the crossbows got finished. I have a vague plan to run a 12 person Dark Ages SAGA tournament (round robin followed by knockout) where the factions are randomly drawn each round - so I might be doing a lot more of these in 2019. 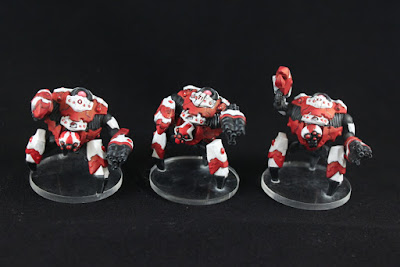 The red, white and black battle suits were done for the sports theme round - they are the colours of my adopted basketball team The Portland Trailblazers. They came in dead last with 3 votes (including mine! Is it naughty to vote for your own entry?). Fortunately the actual Trailblazers are doing well this year (still in the playoffs at the time of writing).

The Squirrel duel really caught my imagination at the beginning of the Challenge and caused me to offer to paint some figures for a friend as well as explore other scales and periods. The only really squirrelly things I ended up finishing were the Jinettes - which will see service in some Italian Wars games and The Sam-mew-rai, which I painted with a cat theme for my son. The list of things I intended to do for the squirrel includes: picts, 54mm poilus, 54mm Jacobites, 54mm Sudan highlanders, WW2 German artillery, all those Normans, Dothraki, Rorke’s Drift defenders from the movie, Union soldiers in greatcoats, and something from the ECW. I would have done all of these but I got terribly distracted. 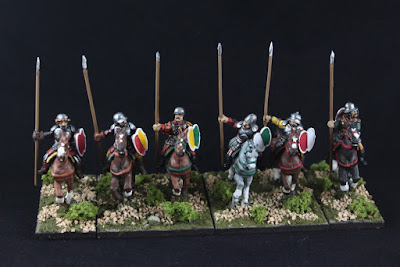 For my Curt Geld I'm donating to Waterloo Uncovered - a charity that combines care for veterans and archaeology. They are also behind Waterloo Replayed - the giant 2 day Black Powder fest in Glasgow in June. Sadly I didn't get my act together to make the trip from the US for the game - I'm sure the participants will have a blast.

I am in awe of the output of my fellow challengers - both quality and quantity. Those at the top of the chart sustain a ten a day habit (at 5 points per 28mm foot) - very very impressive. Congratulations to all those who made it to the finish line, whether or not they made their target total, to the theme round winners for some excellent brushwork and to Curt for his organizational prowess in managing another Challenge to its conclusion. As I write I can confirm it has been zero days since my last miniatures purchase. The shelf of shame is swelling and Challenge X cannot come too soon.

PS I know I owe a miniature to the winner of the Black Powder duel - it'll be on its way once I have your address.