From NoelW: Did I really do all that?

In accordance with the rules and conventions of the Analogue Challenge, herewith please find my visual audit of the accomplishment achieved over the last quarter. 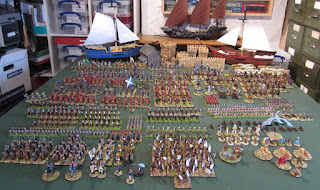 I think there’s 513 28mm figures here and 402 15mm, plus the odds and sods of terrain and cannon. There’s also 20 28mm figs I can’t show, as they’re no longer in my possession but in the display cabinet of our local wargames shop. If you count horses as separate pieces, and total the whole lot as if all items are equivalent, that’s over 1200 wargaming items. In the same period for 2017, I painted 268 figures, so the Challenge has enabled me to quadruple my output. Clearly there’s a management technique here well worth rolling out to a few other activities I could mention!

I’ve been wondering why the Challenge worked so well for me, especially as it was my first time, so I'd no real idea what I was letting myself in for. I started with a very modest target, and wasn’t sure that I’d even achieve that. But a host of different factors that Curt has cleverly integrated made the thing particularly effective in my case. Having a target in itself was useful, especially translating this into a concrete plan (in my case, to follow the first steps of a new ECW collection). Then there were the bonus rounds, whose possibility I didn't even understand when I set off. I was planning to ignore them, but then decided I might as well have a go. And, having done one, I thought "better do them all" - and in each case I ended up with something I couldn't have anticipated before the challenge, and added to my collection in unexpected ways.

Then there was the encouragement of others at each stage - for which, many thanks. I'd got the impression that most of the community already knew each other, so I wasn't expecting any meaningful comments at all on my work, being a newbie, a stranger. And yet there was a long roster of them, many of them hugely positive - and I always find it a great boost to get positive feedback. This gave me a sense of being in a community of like-minded idiots individuals, which is a bit odd when you think about it, but now I feel as if I sort of belong to something.

Having a weekly deadline also helped – it’s both a pressure and a motivator. Then there’s the competitive element – I know that’s not a motivation for everyone, but once I’d hit my target competitiveness took hold of me, and I found myself watching other people’s achievements and wondering if I could match them. I kept setting new targets (can I make 1000 points? Can I make 2000? Can I get 500 points in a week? Can I get in the top 10? The top 3?)

On the other hand, I did find the excellence of some contributions actually discouraging. Curt himself, and Kent, and Miles all seem to be able to turn out pieces of the highest quality, beautifully imagined and expertly realised, and to do so again and again and again. Whereas I found myself sometimes sacrificing quality in order to finish by a deadline. So I think there may be a bit of a conflict here for some people – you want to paint well, but you also want to paint quickly.

But I didn’t come out of the Challenge thinking I’d been downtrodden by a Stalinist regime. Instead, it feels like a welcoming and rewarding community, which I'll miss for the next nine months. I’m hugely encouraged by seeing what I can achieve if I set my mind to it, and by seeing what others can do, too. So I’m now thinking that I can finish in the rest of the year many more units then I'd thought I'd be able to. I’m already thinking up plans for what I might be able to do come Analogue Challenge number IX. The only risk is that I might have exhausted the lead pile before December!

Yes, I know - this is the face of a fantasist, as you can tell by the silly grin = 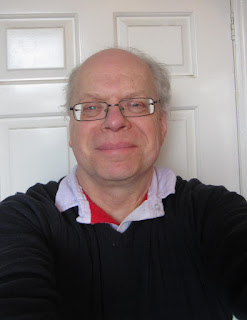 Many thanks, again, to everyone.