Yes, a new frontier for me, perfect excuse for squirreling. I have painted some WWII vehicles and handful of Spanish Civil War miniatures, but mainly different fantasy or scifi. Not a single Napoleonic miniature has passed my painting table, but they might in the future... So I have never painted historical miniatures really, so these ancient Greek warriors are something new to me. I bought them couple of years ago from a sale (less than 10 euros for a box of 40), when I thought I don't have enough to paint... I was just getting back to hobby, and the big GW games didn't attract me at that time, but they are by far the easiest to find an opponent, so I'm on that path now. 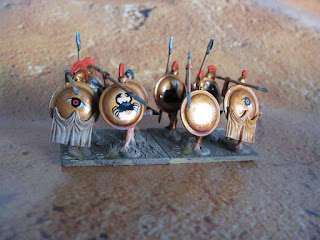 I was expecting to get one piece miniatures in this box, may be separate shields or something, but I was wrong. That was one of the reasons I didn't start these earlier. They were not that difficult to assemble, but since there were different helmets etc in the box, but no instructions, I was afraid I'd build them wrongly... After a bit research, I think everything goes, they had mixed helmets and so on. I still haven't figured out if some of them are (or need to be) champions or something, but since I'm not expecting them to end to the battle field any time soon, I'm not taking too much stress on that. 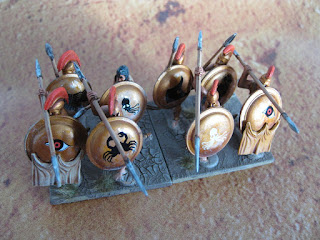 I put four of them on a 40x40 base, that I read from somewhere. Someone wrote that 6 is good. I guess it depends on the rules, but I'm just expecting them to look nice on the shelf. And I think they look rather nice, painted with AP Barbarian Flesh first, then using GW Retributor Gold to pick up shields and armor and then some off-white white, yellow and red to the clothes and they were practically ready. I painted the spear stuffs quite light, I think with all the flesh and gold, brown would have looked a bit mess. I added transfers to the shields, they were a bit messy, but that was just me trying to be quick and ending up using thrice the time... They were not separate ones on the back paper, they were all on one film, which would have been good idea to cut before dumping the piece of 8 decals to the water... And I did that after gluing them into two rows, back row was bit difficult. Some of them are ok, but most of them are not in the middle, they have torn a bit or there are air bubbles under them. 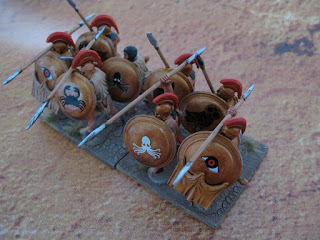 On the bases I tried for the first time Citadel Texture Agrellan Earth, which gave a nice Mediterranean feel to them, I think, but it also shrunk a bit more than I hoped for and the plastic bases can be easily seen. Next batch I need to put something to hide them. And next batch will have transfers, which are properly assembled. Yes, I'll be painting more of these in the future, not necessarily in this Challenge, but soon anyway.

To finish, a selection of Greek Hoplites from M. Teemu. Known for the diversity of his dishes, Teemu is one of the select band of chefs inducted into the ranks of the Chevaliers of the Squirrel.

M. Teemu continues in this vein with a surprise assortment of Greek Hoplites, best enjoyed with an ouzo, or perhaps a Finnish vodka. The elegant bronze finish is a fitting close to an evening of culinary delights. 40 points for Chef Teemu!

This post contains 18 x 28mm and 1 x 28mm Casualty and all of them are Plastic.
I missed last weeks deadline but fear not I am unlikely to miss next week. No doubt most of us have overlapping projects on our painting tables happening and sometimes time just runs out. 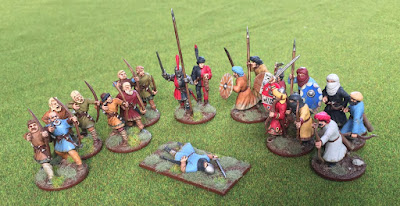 This Conquest Games Norman is having a bad time of it. He has become crippled by being on campaign in foreign lands and overindulging in local food. You can tell by the way he is clutching his stomach that he is in a lot of pain from gut bacteria. An Army marches on it's stomach indeed. 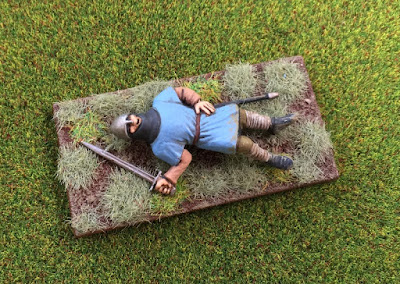 These Gripping Beast Arabs have 4 hand painted shields. At the time of creating them I was really starting to feel a good flow with my painting. Very happy how they turned out and more will be on show next week so stay tuned. 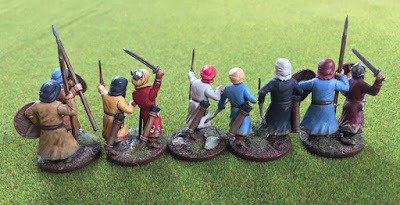 A pike unit boss and a previously painted drummer from Perry Miniatures. Only one of these Red and Black hard drinkers counts for points. The drummer was torn asunder from his base and re-based. A delicate yet brutal task. I have a few flag wavers already so I won't be attaching a flag to this bossy dude. He can boss around a pike unit me thinks.
I am sure he is just trying to boost morale by yelling into his helmet and waving his sword.
He will put it away and join the fight as soon as his hangover lifts a little. 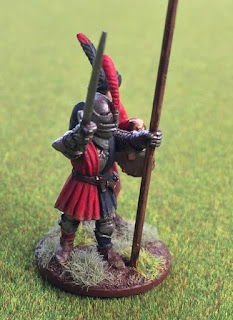 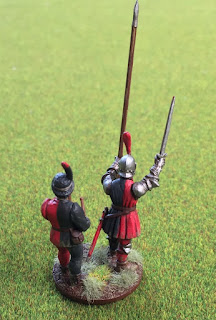 Gripping Beast Dark Age Archers. After painting armoured miniatures these none uniformed humans actually take longer even though in almost every game system they are cheaper. One below was a carry over from the previous batch of completed figures but was waiting for a partner to join him.

And now to M. Brendon, an exciting chef from the Australian Tropics, whose work with diverse ingredients places him firmly in the ModOz tradition.

A base of dead Norman is surrounded by Dark Age Archers and a layer of beautifully-decorated Arab Infantry, The entire ensemble is garnished with a touch of M. Brendon's signature Beer and Bacon.

This course nets the lucky chef 90 points, plus 4 for the decoration on the shields and 3 for Le Normand Mort.

These four 28mm plastic multi-part models of the Blood God’s Slaughter-kin come from the “Games Workshop” Daemons of Khorne Bloodletters boxed set for “Age Of Sigmar”, and consist of a Icon Bearer, Hornblower and two of their Hellblade-wielding brethren. The figures have all been assembled using the instructions found within the miniatures’ box, and having previously assembled a Gore-drenched Icon carrier for my Bloodletters unit, I decided this time round to build a daemon waving a Bloodsoaked Banner instead.

All of the scaly Chaos creatures were treated to a double-dose of “Vallejo” Heavy Red, generously washed with "The Army Painter" Strong Tone Quickshade and dry-brushed with (more) “Vallejo” Heavy Red. Having learnt some valuable lessons previously painting these daemons, I then turned my attention to their “jagged” hand-weapons, musical instrument and icon, and primed them with "Vallejo" Heavy Sienna before pigmenting them in a double-layer of Gold.

In the past I’ve experienced the “Vallejo” Acrylic Model Colour frustratingly spattering my figures with tiny flecks of bright metallic paint, so I was keen to both wash these areas with "The Army painter" Strong Tone Quickshade and subsequently dry-brush them with (more) "Vallejo" Gold before moving on to the more detailed brushwork. This would allow me to ‘tidy up’ any irritating splashes of “Vallejo” Gold on their horns, “slavering jaws”, hands, hooves, back spines and sword hilts with “Citadel” Abaddon Black before gently blending these blackened areas in with the Bloodletter’s red limbs.

With this regional specialty of the Hell Dimensions, M. Simon has prepared a new take on the rustic boudin. Not a blood sausage, but Bloodletters! I sampled this dish at a charming little bouchon in Lyon many years ago, and they did not disappoint. Be warned, they can deliver a kick to the uninitiated...

A robust burgundy and a strong stomach are recommended (nay, compulsory!).

These five "cartoon scale white metal figures" of Lord Rascal’s Icky Spiders are produced by “Lucid Eye Publications” and can be bought from the company's "Toon Realms" range. Sculpted by Steve Saleh, I have previously painted half a dozen of these arachnids for the “Dragon Rampant” rule-set in a simple “Vallejo” Heavy Charcoal and “Citadel” Abaddon Black colour scheme, so wanted to make these metal horrors rather more eye-catching on the tabletop, especially when mixed in with their much more monotone brethren.

As a result I decided against just super-gluing the Lesser Warbeasts to their 30mm lipped plastic circular bases and instead drilled a tiny hole up into their underbelly before attaching them to some pieces of wire. This allowed me to prime them with impunity, predominantly wash them using “Citadel” Nuln Oil, and subsequently dry-brush the fanged critters without having to worry about catching their bases with my brush and doing some considerable tidying up once the bulk of their painting was finished.

M. Simon's second course is a beautifully-prepared selection of spiders. Don't be worried, there's enough for everybody!

These five-point morsels give this chef another 25 points! Now, I think an aperitif is in order before the next course... *shudder* 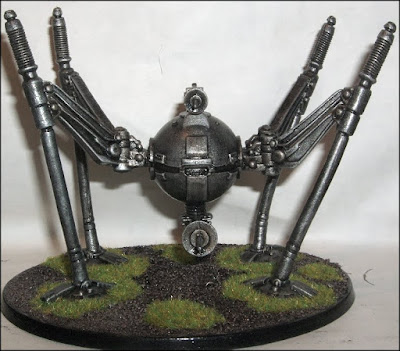 This huge 83mm tall plastic model of a Commerce Guild Homing Spider Droid was made by “Wizards Of The Coast” and is model 02 from their Bounty Hunters expansion for the manufacturer’s “Star Wars Miniatures Game”. “Effective against both ground-based and airborne targets”, the OG-9 homing spider droid “was designed to transport a large and devastating weapon throughout the battlefield” and made its first appearance during the Battle of Geonosis in George Lucas’ 2002 American epic space opera film “Attack Of The Clones”.

The anti-vehicular walker was initially ‘hacked’ from its ill-fitting circular base using a modelling knife and permanently repositioned upon a 120mm oval “Games Workshop” stand. It was then treated to a double undercoat of “Vallejo” Gunmetal Grey and heavily washed with “Citadel” Nuln Oil, in order to ‘cover-up’ the Baktoid Armour Workshop-built robot’s pre-paint scheme.

Chef Simon has produced another tempting dish in his ongoing series of Star Wars-influenced cuisine. The elegantly finished robot is a larger portion than one would ordinarily expect for an entree, so we will score it as a 28mm vehicle. This in no way detracts from its deliciousness.

An Evening at Bistro Mercredi 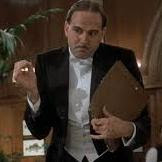 
Coffee and brandy to follow, with after dinner mints (they're only wafer thin...)

On to the first course...