From ByronM - Greek Slingers and some old Warhammer Terrain ( 62 points)

I just managed to finish these few things up to squeak them in today rather than waiting another week to post them.

First up are two terrain pieces that I have wanted to do for a long time, yet for one reason or another never seemed to hit the painting table.  To give you an idea how long, I bought these at the GW Baltimore Games Day 2004 back when I was an Outrider (a long since dead program where GW actually promoted the hobby and had people teaching painting, teaching games, running sponsored events and tournaments, and helping at Games Days)! 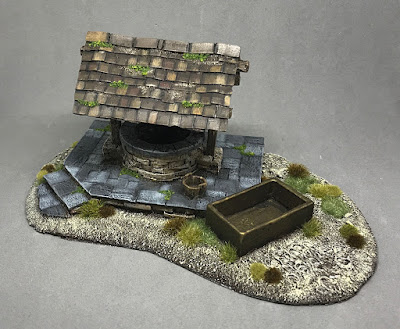 Anyway I bought these two Forgeworld pieces back then for use as Fantasy terrain as I thought they were very cool looking and would fit with almost anything.  I then promptly put them in one of my many "to get to boxes / closets" and forgot about them.  With the Greek project underway, I kept thinking about some terrain options and these popped into my mind, so I dug them out. 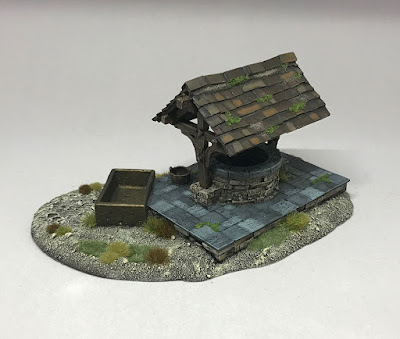 First up is the well, which has several elements that the Greeks wouldn't have (like a metal water tray) but I think it fits well enough anyway.  I wanted to keep the stone work a sandy colour to fit with much of what we think of as Greek stone work, but also wanted a contrast colour for the tile and rim of the well, so did them in various greys.

To add further contrast I did the wood roof with various browns to add some variation rather than being monochromatic.  Lastly I based it to match my Greeks and added some moss and foliage around the well and on the roof.  Oh and the roof section can slide in and out to make sure it doesnt get broken and make packing easier. 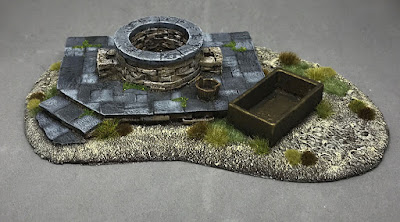 The second piece of terrain is a bloomery.  I did the same stone colours as the well for this one, but without any accent pieces to help show the utilitarian nature of it.  It was simply a work piece, nothing fancy.

The wood edging got a bit of extra colour mixed in to show some wood grain, and the billows got painted pale.  It then got the same base treatment as all my other Greeks. 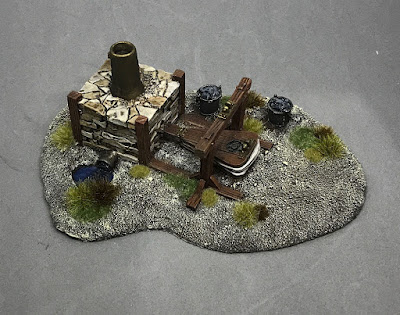 I decided not to attach the lever that would pump the billows and am not sure what I am going to do with it yet.  I may go back and attach it, or may just paint it and lay it on the base.  My issue is that it is a long thin piece of resin that sticks up and away from any protection.  Since I have to pack terrain away and don't have room to leave everything out all the time I am almost 100% assured of it breaking off at some point if I attach it. 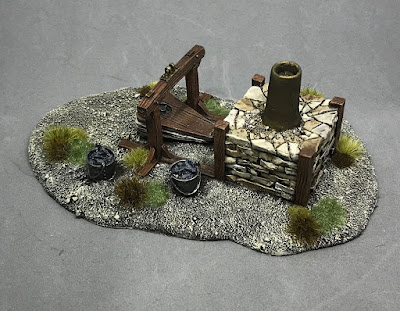 I love both of these pieces, and in typical Forgeworld fashion they are long since discontinued....  Which is a shame as I think lots of people would buy them if they could. 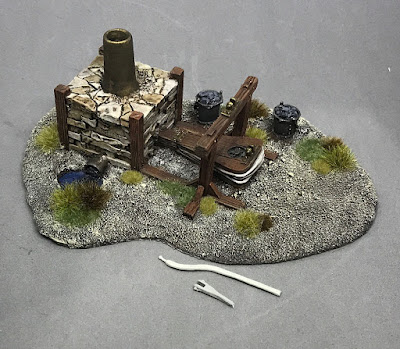 Last up, is a small unit of Greek slingers from Victrix.  I much prefer these models over the Warlord ones as they have a lot more character and form to them.  However, as usual I have a complaint.  The box is advertised as Greek Peltasts, Javenin men, and Slingers, but you can only make 8 slingers out of the 56 figures in the box!  The box actually tells you that on the back, but the website does not, so you don't find that out until you get the box in!  Worse, there are only 2 poses so they are repetitive.  Really disappointing as I wanted more slingers, but am not willing to shell out for additional boxes at 8 a piece.

It's not all bad though, as the box has 56 men for about $70 Canadian once it gets here, and they are all really nice (and the Peltasts and Javenin guys have multi pose models).  At about $1.50 a figure that's an amazing deal compared to GW pricing gouging.

I decided to base my missile troops for this project on 40mm x 40mm bases instead of the deeper 40mm x 60mm that I am doing the Hoplites on.  I am also putting only 2 per base to help show the spread out nature of the troops, which is likely still too close together for the slingers but 1 per base didn't look like enough men per unit, so it's a trade off.

They are done fairly plainly as there is not many detail pieces on the figures.  The figures have detail, just nothing specific to pick out.  Its all robes and flesh.  I may decide to add some trim or pattern to them, but not really sure, after all these were the men fighting with slings because they could not afford a shield, and if they couldn't do that would they really spend it on fancier clothing?


There was I thinking that I could enjoy a couple of beers safe in the knowledge that Byron had already posted, but no!  Cracking stuff  Sir!  The terrain is clearly worth 20 points all day long, but I am adding a couple of extra for the detailing so 62 in total to your tally.