For this week's submission I have the two units, some more Death Guard and Greeks (Spartans).

First up is the unit of 30k jet bikes that I was trying to complete last week, at the last minute for submission.  They ended up taking longer than I thought with last minute details like all the control buttons and screens, the seats, and getting the bases just right. 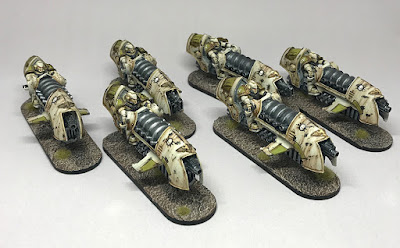 This unit is made up of 6 scimitar pattern jet bikes from the Horus Heresy era.  I fell in love with these when they were released a few years ago, but the price kept me from buying them until recently.  I didn't want to do a small squad of 3 since they would get wiped out too quickly like that, and I wanted them to have some staying power, so I did 6 of them. 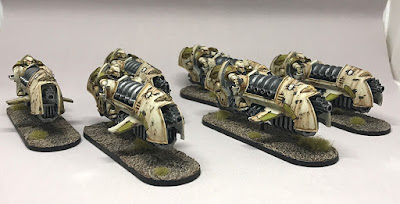 Similar to all my other 30k Death Guard units, they have been painted to show heavy damage as they fight against the traitor Horus on Istavan IV at the outbreak of the war.

The bikes are supposed to be mounted on the normal GW 50mm clear round flying stands and come with those along with 30mm tall mounting posts.  I thought both of these looked like crap with them, and the normal pill shaped bike bases are way to short at 50mm long for these behemoths.  So, I custom laser cut some 32mm wide (the new standard marine base size) x 100mm deep bases. 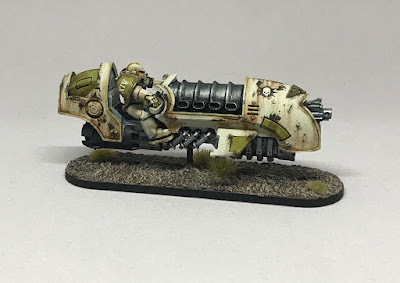 I picture these bikes hovering along barely skimming the ground, rather than flying around like the Eldar jet bikes do.  Therefore, I put some short brass rod into the bases to mount the bikes on at various heights, but all low to the ground.  While 1 or 2 are a little too low when view up close from the side, I like the effect overall and think they look much better this way than the official "up in the sky" look. 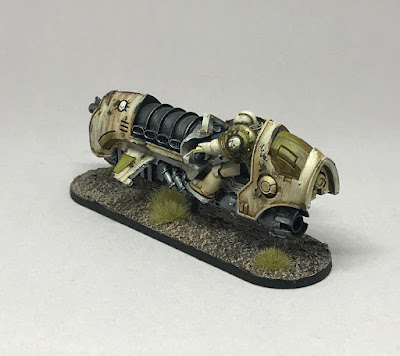 Next up, I continued along on my Greek project, really trying to make sure I complete enough over the challenge to host a valid game with them for the Fawcett Avenue Conscripts and not have to wait until next years challenge to finish them up.

This is another unit of 16 of the Warlord (Immortal) 28mm Greeks, once again done up as Spartans.  I am pretty sure I will paint the remainder of the armoured Warlord figures as Spartans to keep the look consistent for them.  I will keep the Victrix ones that I have for Athenian and Thebian units as they are already supposed to look slightly different. 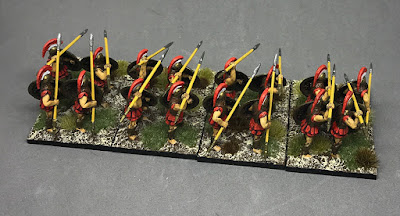 This unit is once again done up on 40mm wide x 60mm deep bases to help protect the spears and allow bases to meet in combat rather than trying to line units and breaking spears off while trying to intermingle them. 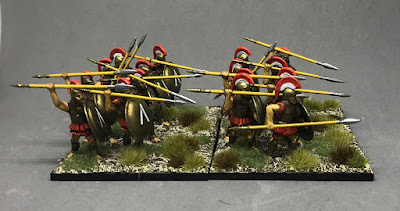 While I really don't care for the figures, the lack of detail and the uniformality of them certainly make the units fast to paint, and they don't look bad once they are ranked up.  Four units down, only a LOT more to go.


Another fabulous post Byron, but the stars of the show, for me, are the jet bikes - they are so cool!  I love the basing solution and when I went back to have another look at them found myself making all sorts of silly sound effects as I imagined them buzzing around the battlefield.  Tremendous painting, basing and detailing and so I will be awarding points for full vehicles giving you a healthy 170 points to your tally.  Bravo Sir!
Posted by ByronM at 3:17 am