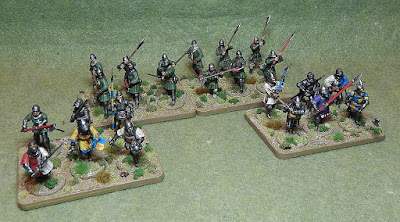 This week I have been continuing apace with the Hundred Years War project and another 24 foot have joined the French contingent. As previously all are from the Perry Miniatures range of plastics, mainly the Agincourt French Infantry 1415-29 set, but quite a few mash-ups using components from the English Army 1415-1429 set 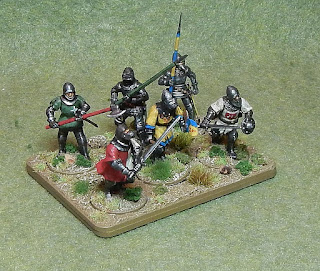 The first unit to show is a group of six men at arms, I've tried to apply a bit of heraldry on these and some is done with standard brush work but other ones done using a technical pen, the first time I tried this out. 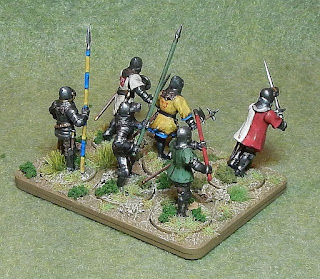 A second group of six men at arms completes the 'heavy' component, again mash-ups using components from both the French and English sets. 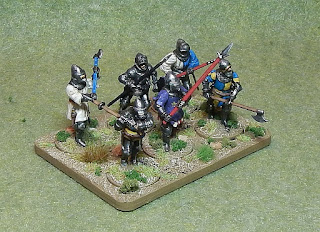 Again I had some more attempts at heraldry and quite like what I did with Phillippe, Comte de Nevers, front and center with the cut off lance, although the fleur de lys could likely use another highlight. 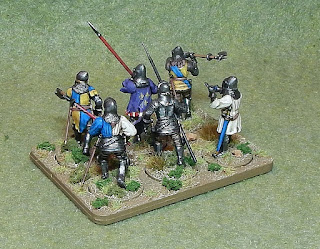 The third unit completed over the weekend is a group of well-equipped infantry in the green livery of the Comte de Nevers as shown in the leaflet that comes in the Perry Miniatures box. 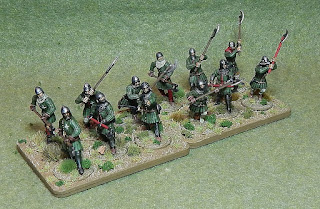 Many of these are mash-ups with bodies from the English set, typically the bodies in the French set have mail coifs while those in the English set have a cloth cowl. I think it gives a bit of variety into the mix. I've made some heavier armoured English long-bowmen that I hope to have done for next weeks update. 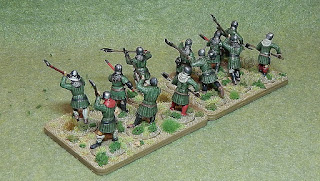 Now, having painted two units of men at arms, two units of sergeants and a unit of crossbowmen this represents a 24 point Lion Rampant warband so I have completed my first duel - Duel Rampant (SD5)

I'm quite pleased with that, but the force shall not stop there!

Here are a few close-ups of some of the figures, maybe a little out of focus..... 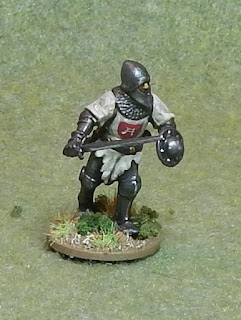 This is one of the infantry bodies off of the standard French frame, he is heavily armoured with at least partial plate so was re-purposed as a man at arms, the heraldry is for nobody in particular. 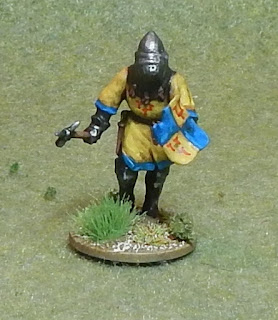 Another man at arms made entirely from components off of the French men at arms sprue. This was my first go at doing livery with a technical pen, certainly a lot easier than using a brush. 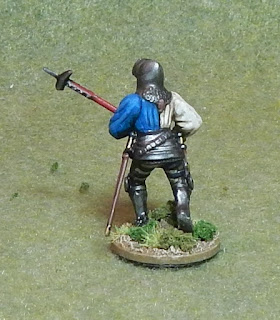 This man at arms is again from the French sprue, and is depicted in a long-sleeved half coat. The French men at arms sprue is a lot more 'dressed' than the English sprue. 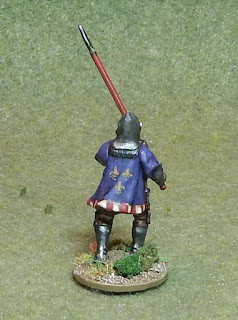 The last man at arms here is Phillippe, Comte de Nevers I wanted to show my attempt at his heraldry, this was done using a brush, although a yellow technical pen would have been useful. It could probably use another highlight with the yellow. 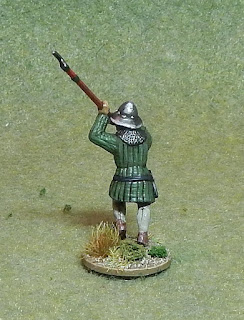 Rear view of one of the sergeants with axes. 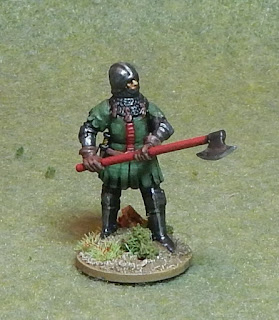 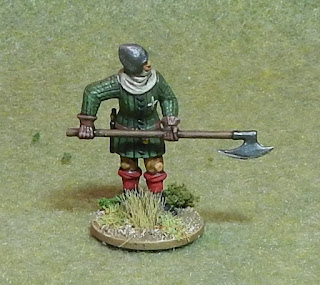 The last man at arms is made using a body and head from the English sprue and arms from the French sprue. He has the cross of St. Denis field sign.

France? France? What no, this is Spain's week! Oh well, if we must.

That is a spectacular bit of kitbashing there, and a very good mash-up of the French and British sprues. I very much appreciate the work you've done on the men-at-arms, and they do stand out. While, as you know I am partial to the blue and white, I think the best is your first man at arms.

And now, Cardinal Fang will read out the Charges:


You are hereby charged that you did, on diverse dates, paint a total of twenty-four 28mm figures, for a total of one hundred, twenty points!

Now -- you will stay in the Comfy Chair until lunch time, with only a cup of coffee at eleven!

Posted by Paul Scrivens-Smith at 10:30 am