No ancients in 6mm this week but a return to Waterloo, Steve wants the reserve corp of infantry painting for his Waterloo game so this is the first installment, he will still need I think another twelve Battalions but this includes figures I do not have in hand so these will be coming later.

Here we have ten Baccus battalions, each of twenty four figures, eight British and two Hanoverian. These will supply most of the British battalions for the reserve, still need three Highland and one Rifleman Battalions ordering which will allow me to do all the troops. 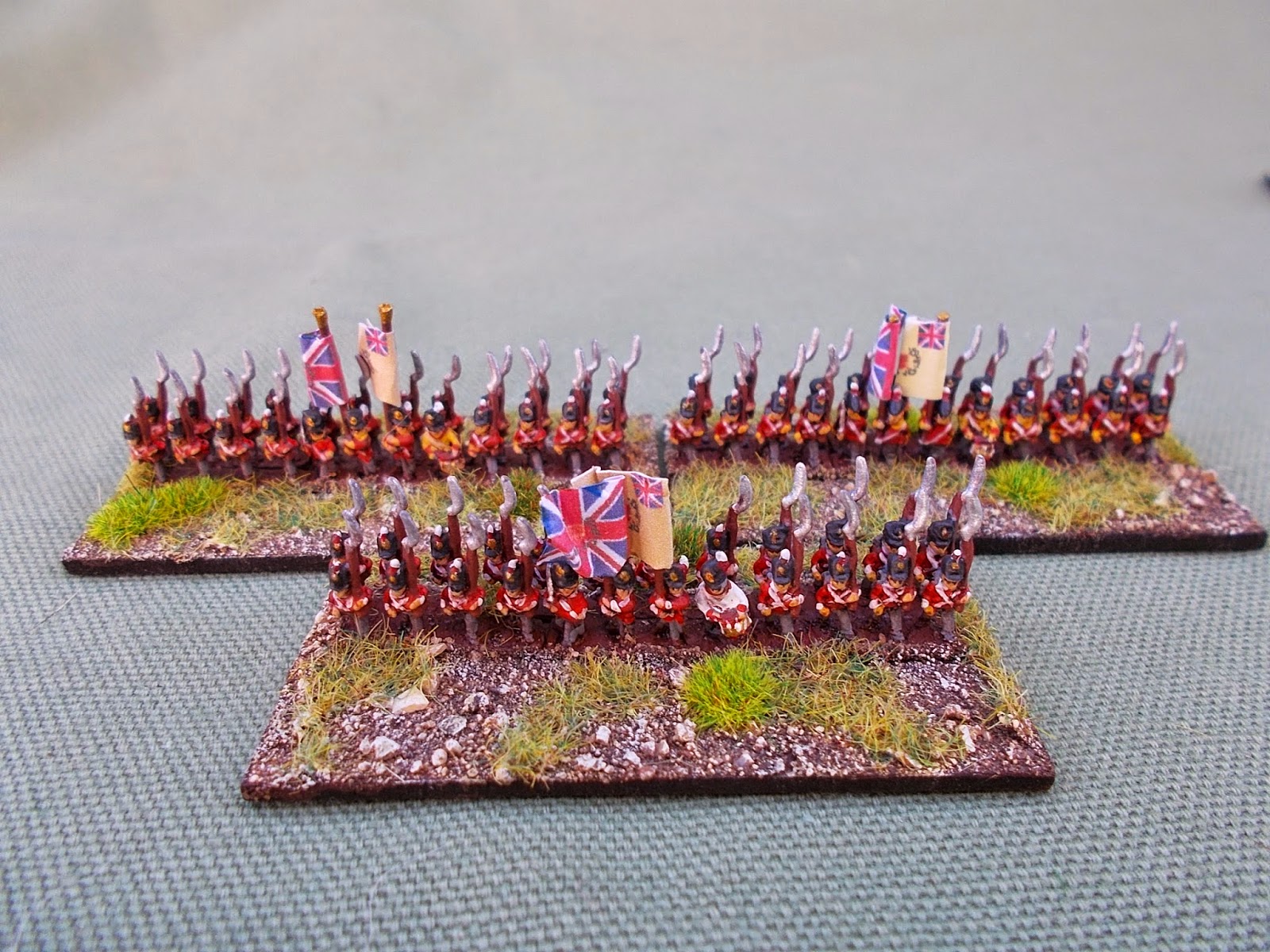 1st Battalion 27th Regiment, Enniskillen(old spelling) 2nd Battalion 81st Regiment, 1st Battalion 40th Regiment. I had a flag failure on one of these three and had to replace it. Still out of 18 flags I can't grumble. 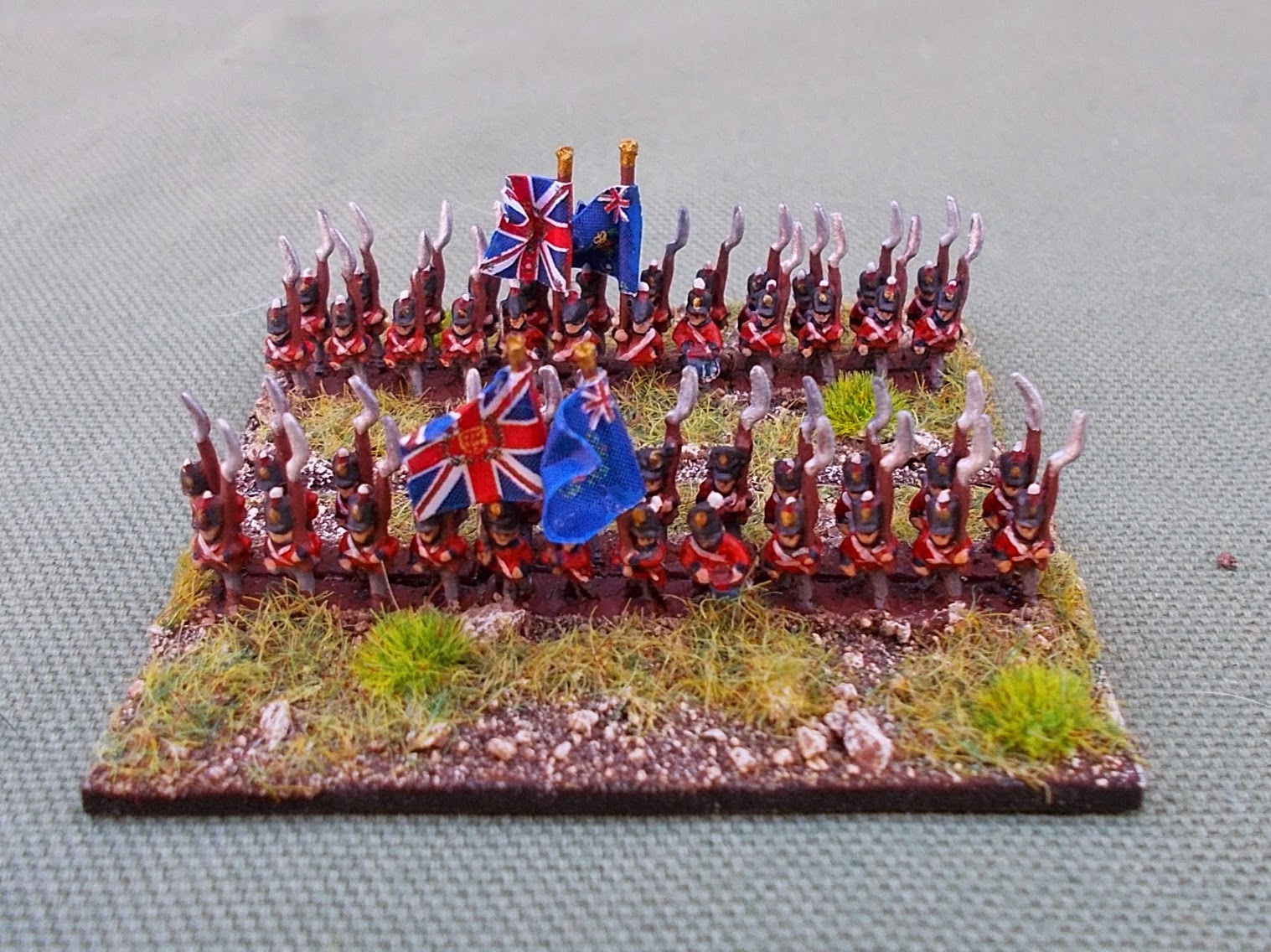 My son bought a set of flags at random at York, my fault as I told him to just pick one of the British flag sets, ended up being a sheet I thought I would not need but last night I got to use one for the 3rd Battalion 1st Regiment Royal Scots (the guys at the back) the 1st Battalion 4th Regiment Kings Own has a normal blue Colour. 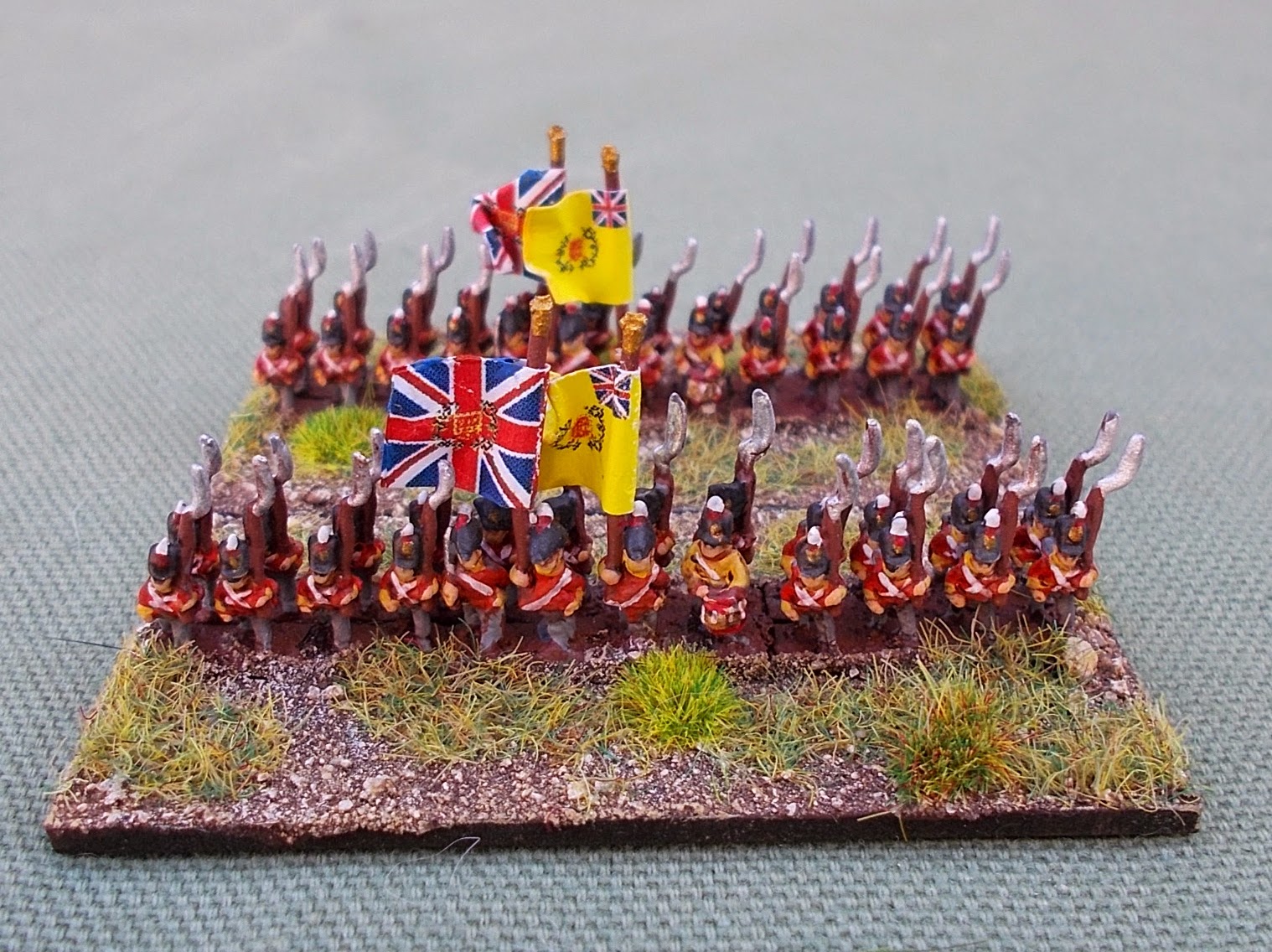 These bright fellows from the front are 1st Battalion 28th Regiment and 2nd Battalion 44th Regiment. Painting the edges on the Union flag remains a bit of a pain but pays you back many times over for the finished look. 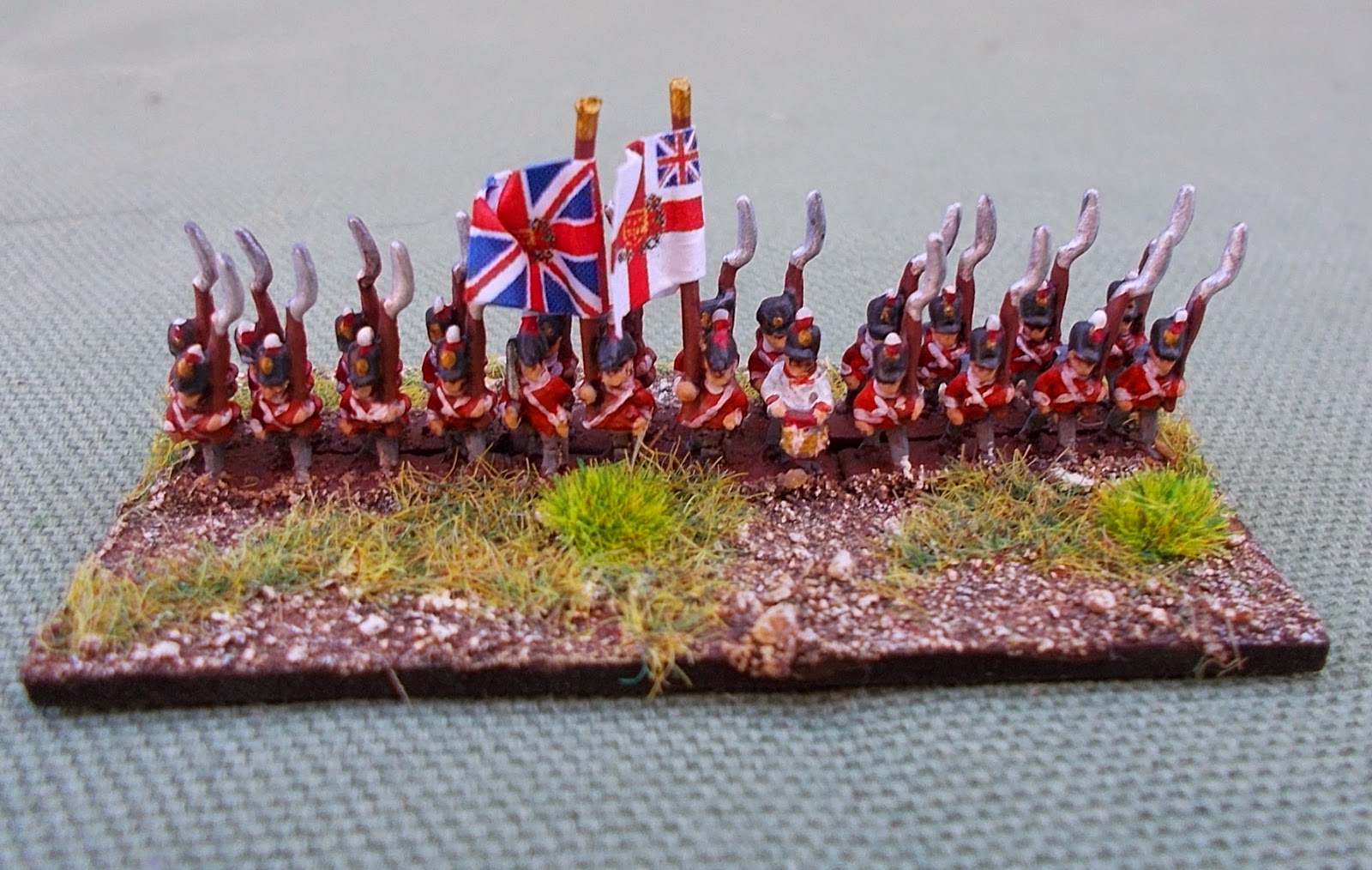 I had one battalion last submission unflagged due to having no Georges, happily I now have the sheet, good job as I needed another 4 flags from that sheet including 1st Battalion 32nd Regiment, the only other Battalion that has the George I required. 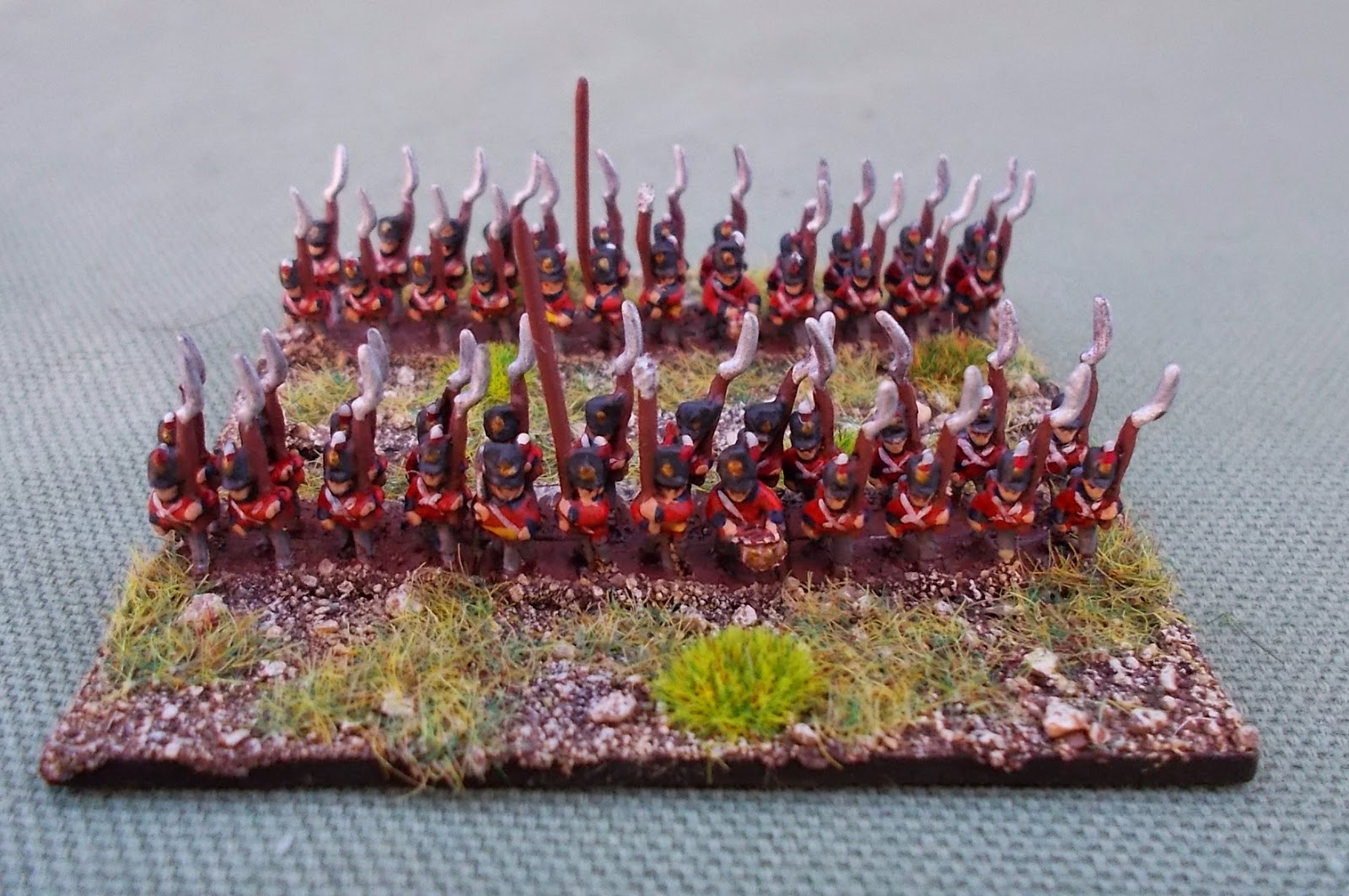 The first two of ten Battalions of Hanoverian Landwehr that I need to get flags for. Lee has some spare he is letting me have so these will have to wait on a visit and will appear on my blog with the other Battalions. I intend to do some conversion work on the next lot so they can have the distinctive caps on some of them. I have cut one standard pole down to a Half Pike. That and the stripped drum rims is all the difference in the figures. I have painted a orange/yellow sash on the officers as well though. 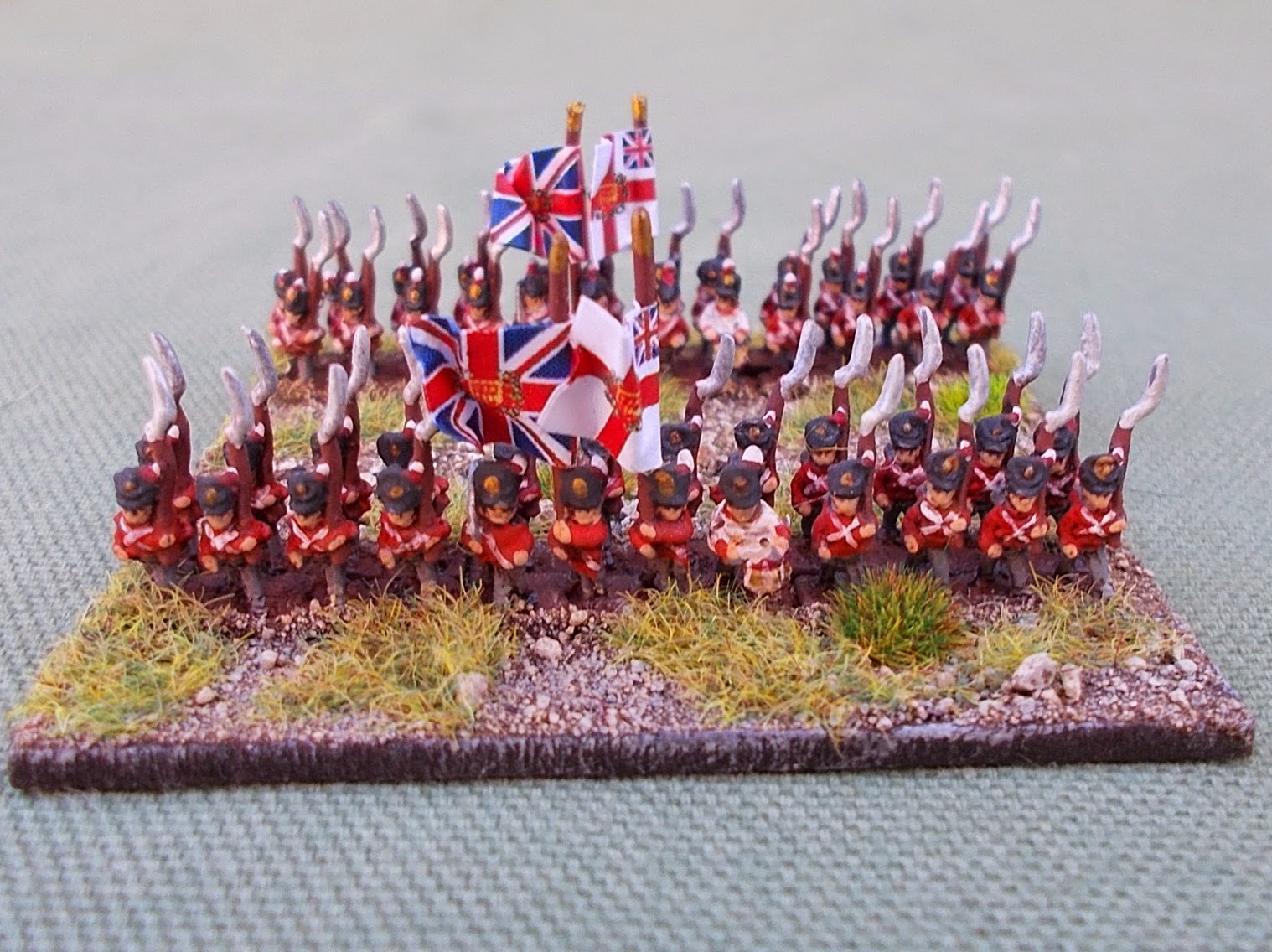 Here is the 2nd Battalion 33rd Regiment from the last lot finally flagged, This battalion as the other three were not part of the Reserve and as such won't be needed in the game my mate is involved in as he is not supplying any of the main troops though they are sure to be used in other battles. 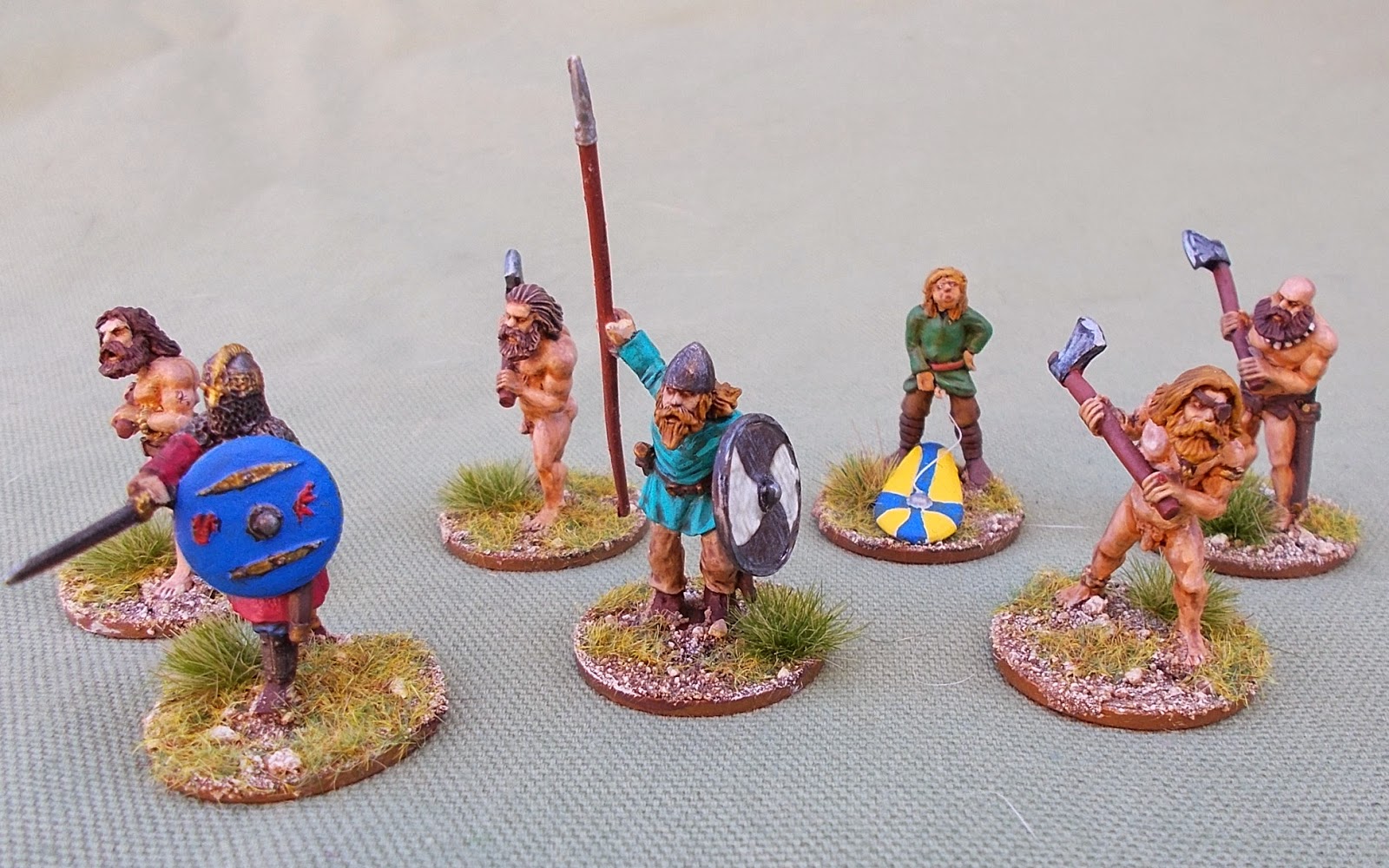 As a break between stages of doing the Brit's I did these seven Vikings, six are Griping Beast whilst I don't know about the youth. 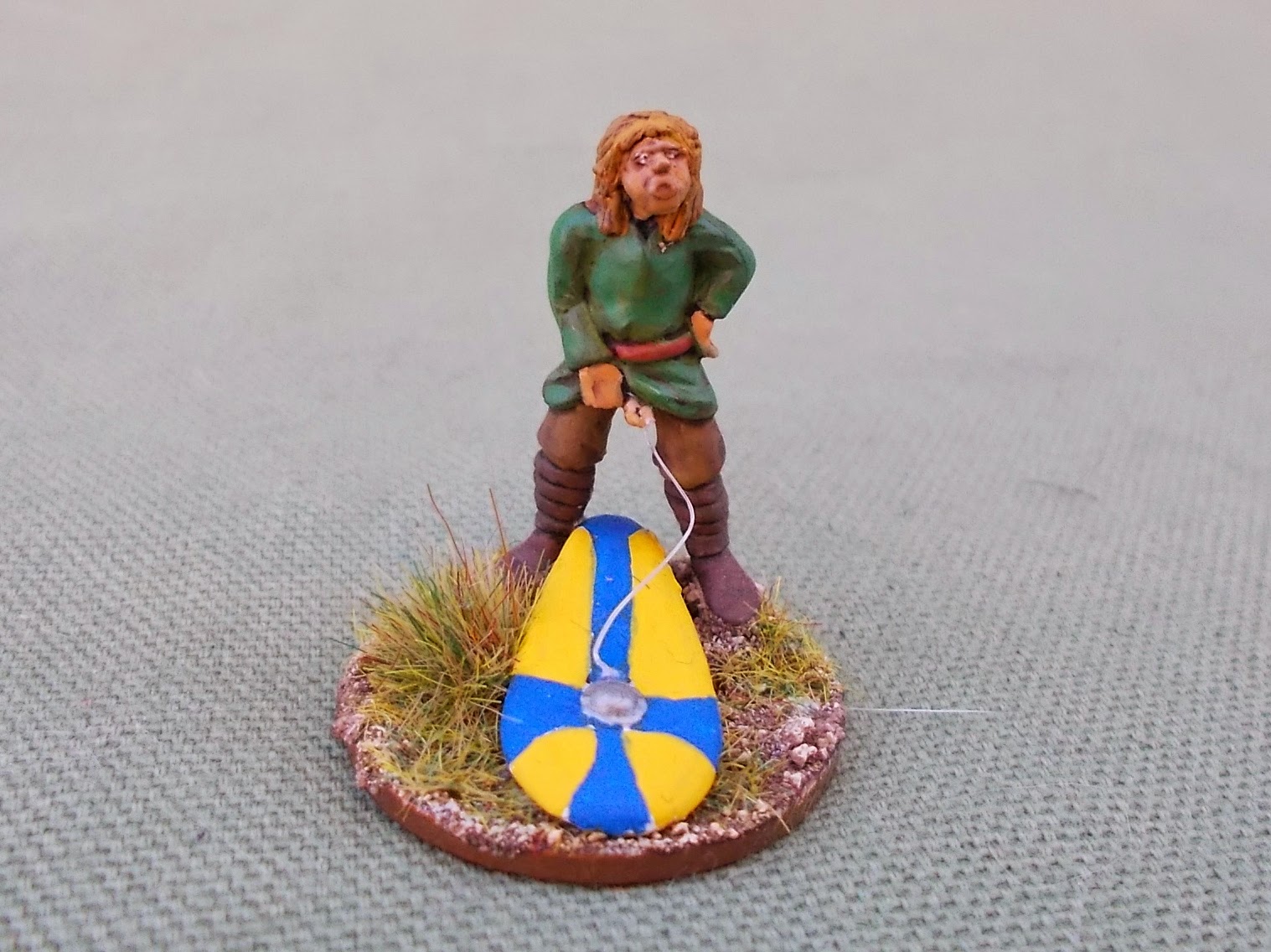 This charming lad was in the massive pile that Gary Amos gave me and my son at York. I was lying in bed when I suddenly had the idea of adding a shield to the base in homage to those Football (Soccer) car stickers showing a fan urinating on a rivals shirt (cartoon). Seemed to good an opportunity to pass up. 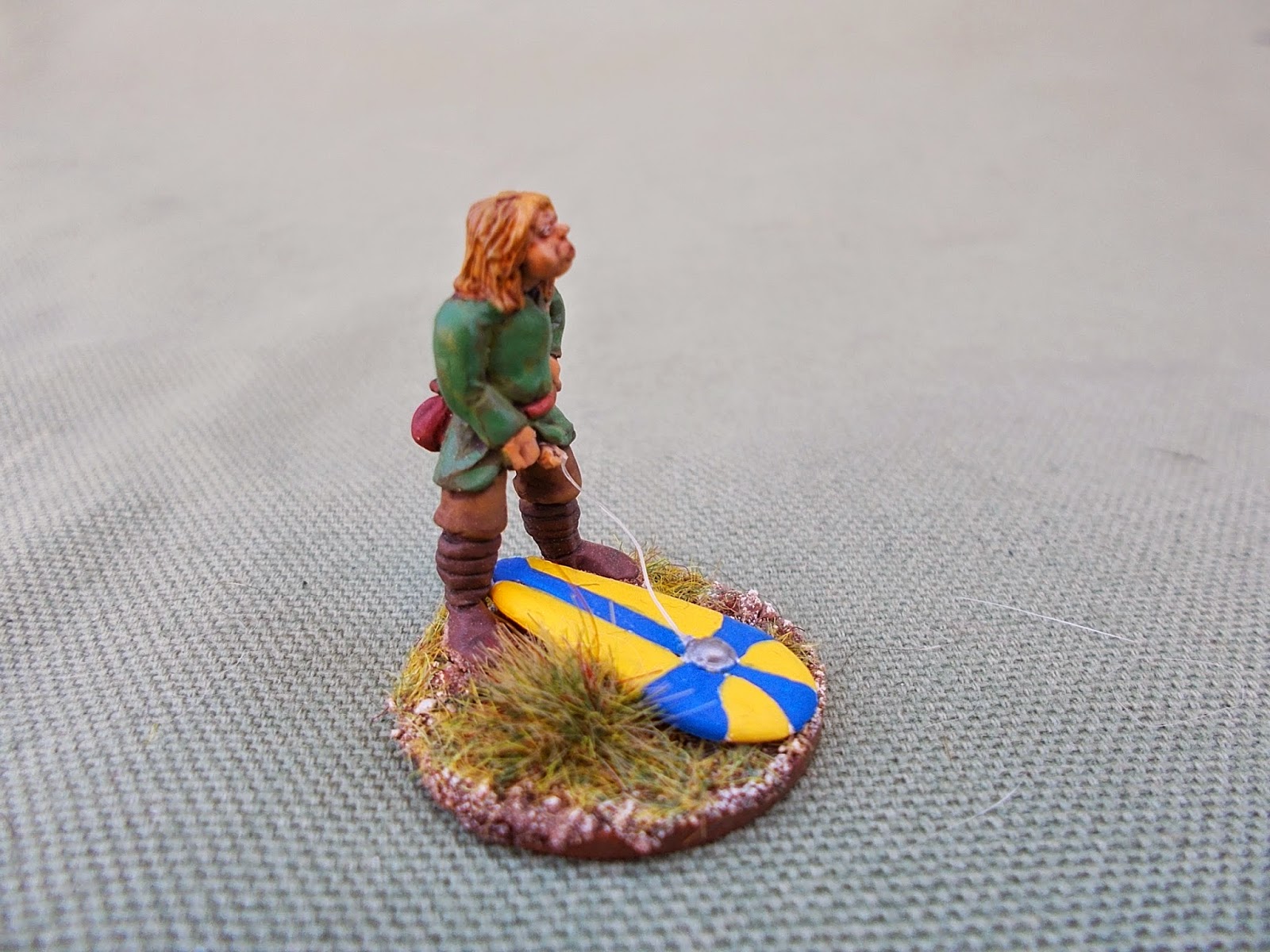 Took a few attempts to get the soft plastic cement to behave how I wanted it. Forgot to paint it so it's not so clear but I am sure you get the idea. Just a pity I did not think of it in time for the comic round. 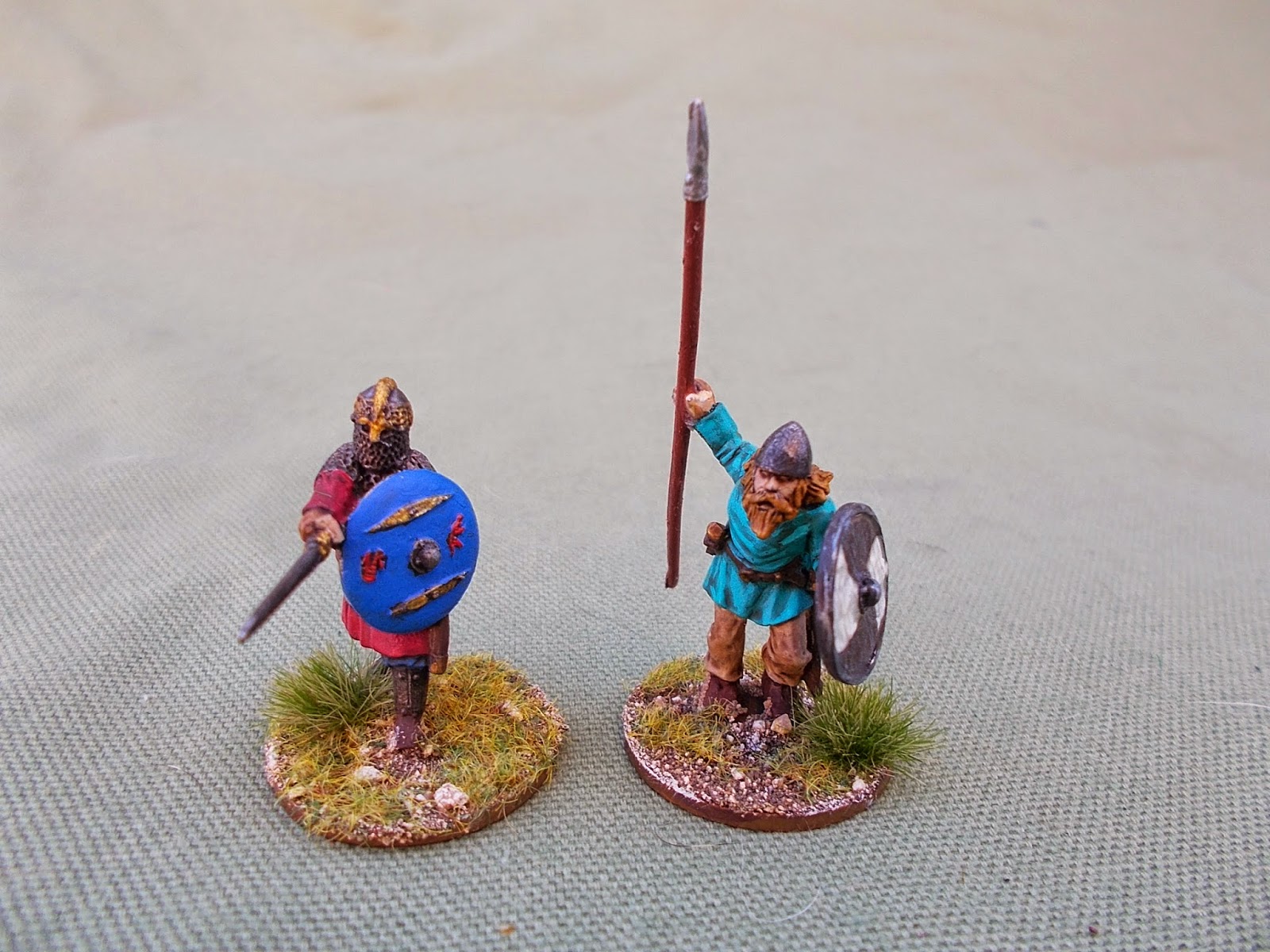 I recently painted up a couple of units for Saga but was not happy with a couple of them. So I have taken the opportunity to replace them from the Gary mountain. My son is happy as he has the two figures I did not like. 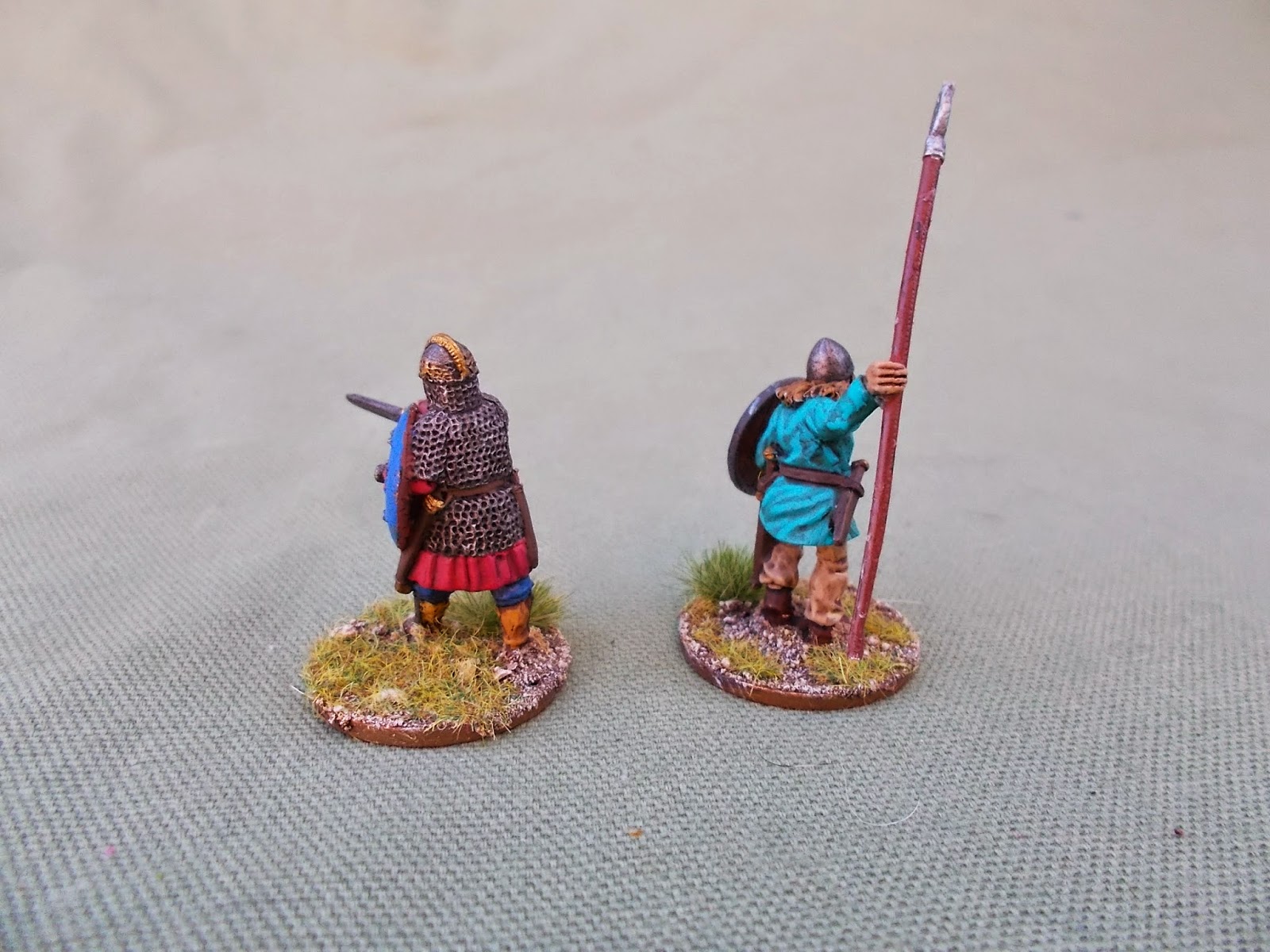 I was originally adding a banner to the spear but it was a disaster and the whole sheet just will not work so gave up and added the spear without the  flag. 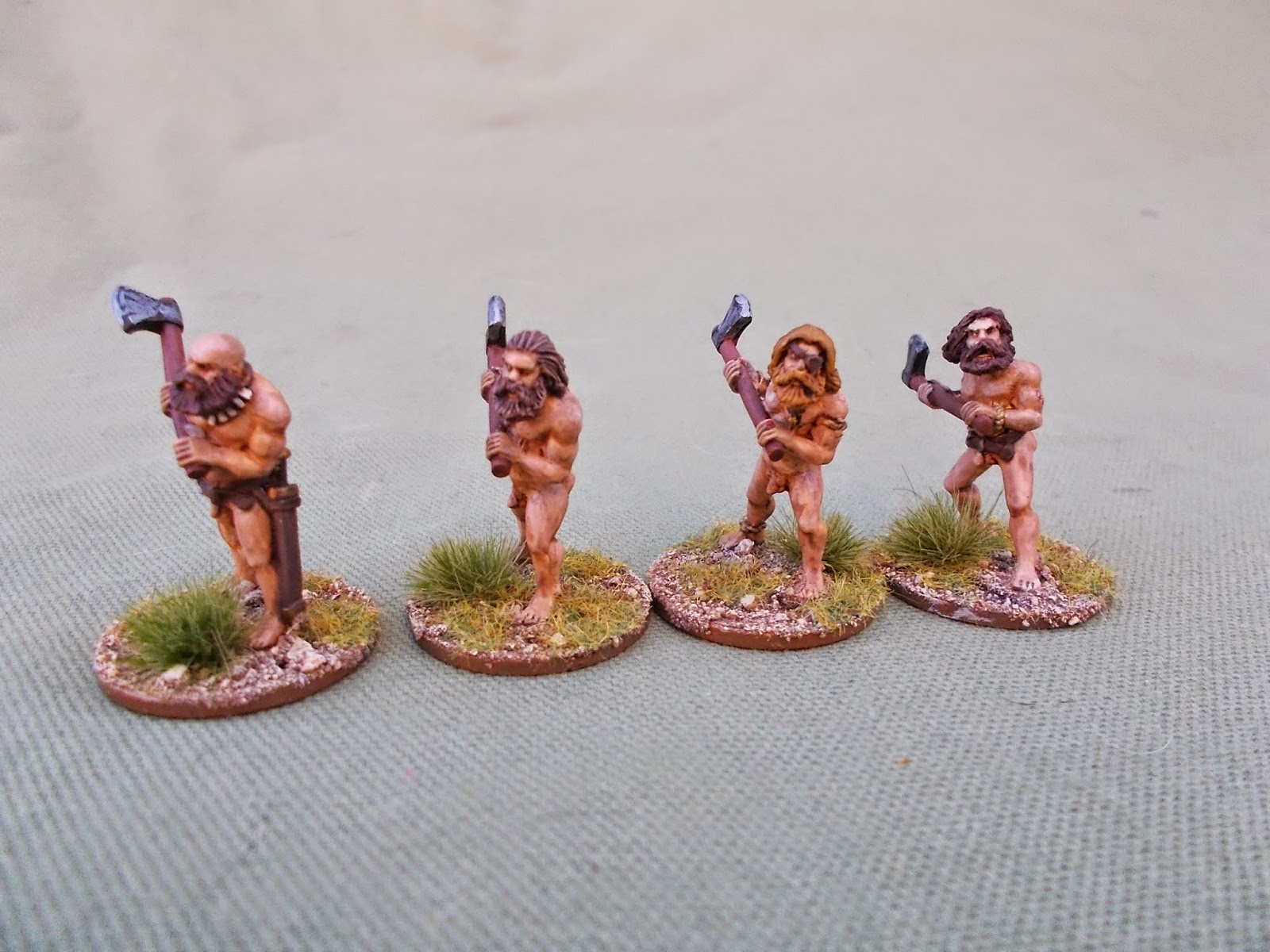 Finally a bunch of naked berserker's, Shame the poses are so similar but the heads are different enough to make them work as a unit. Another point for my Viking Saga army. I think I may now have more units than my son, that should drive him back to his brushes. 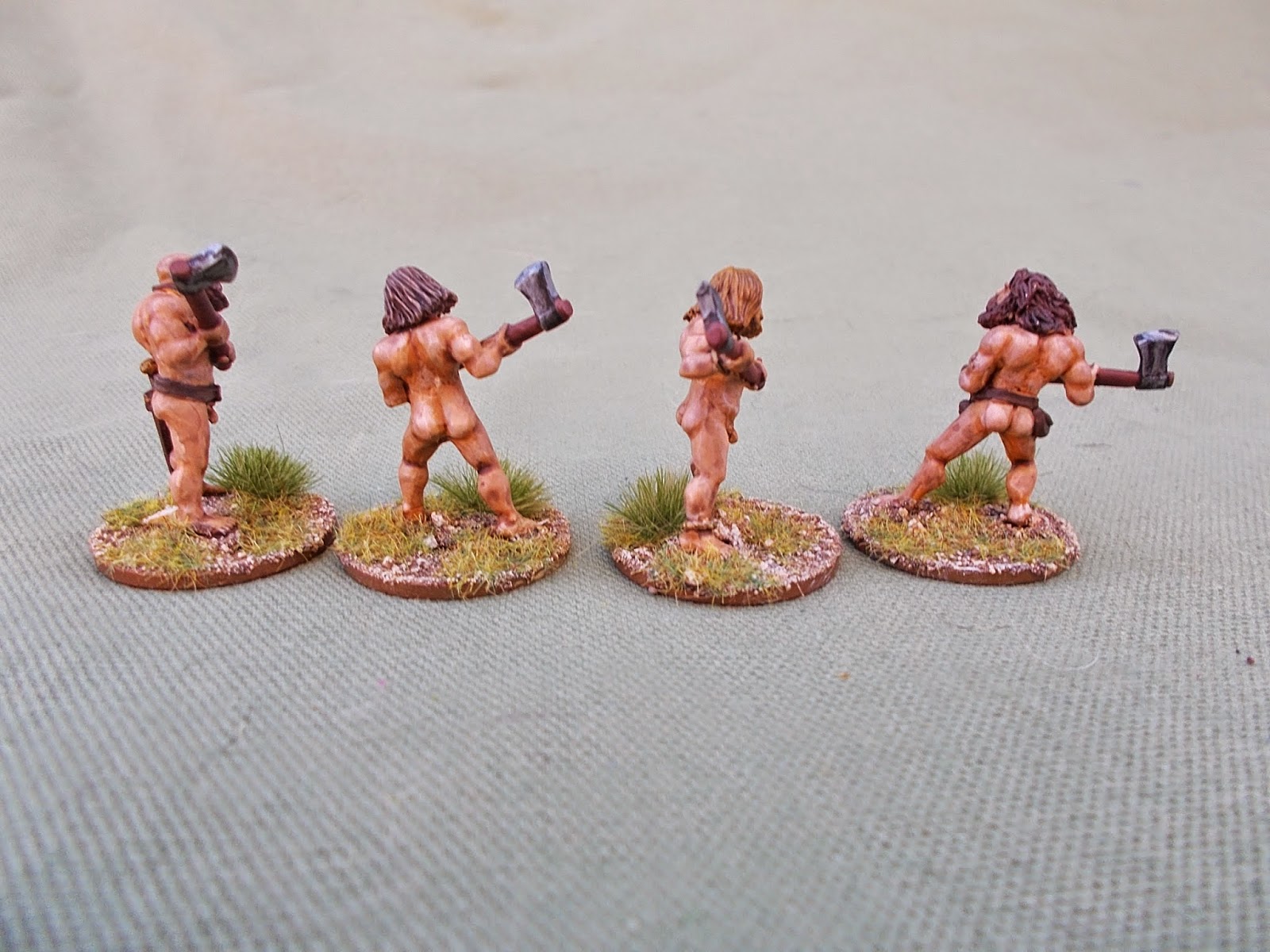 It was the first time I have had to deal with so much flesh and it suitably embarrassed my daughter. Again quite happy with results and I have at least one more unit of these whilst my son also has two. Should be fun when I can drag him away from Command and Colours for a game of Saga.

Point wise, that's 120 for the Napoleonic's and 35 for the Vikings, should make my new target next week.