From JamesonP: Live from the Battlefield (25 Points)

As we get into the year, work has picked up considerably for me. That said, I've been more or less sticking to my painting schedule.

Given the recent demands on my time, the five figures below didn't get to make a stop in my tabletop light box before ending up on the tabletop battlefield at the club. 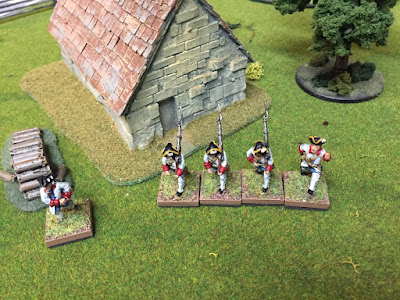 Here we have more figures from the Conquest Miniatures French and Indian War line. There's an officer to the left. three marching soldiers in the center and an ensign on the right who, without a flag, makes a good unit commander.

The expeditious deployment to the field saw these figures routing some British regulars and colonial provincials in a Friday night game of Muskets & Tomahawks. It made for a rousing end to a long week of work.

I have six or seven more of these left to paint along with some Woodland Indians and Canadian Militia from Wargames Factory before I move on to another genre.


Hello there Jameson. Really liking what you're doing with these Conquest Games minis with just the one shot of them in action, I can't see the details, but they seem to have come out really nicely. It sounds liek they avoided the curse of newly painted miniatures, too. Five 28mm miniatures for a neat 25 points, and I'll look forward to the next installment of this project!