On this most jolly of days, I had the benefit of being able to paint the whole afternoon and get a third entry done for the Challenge. 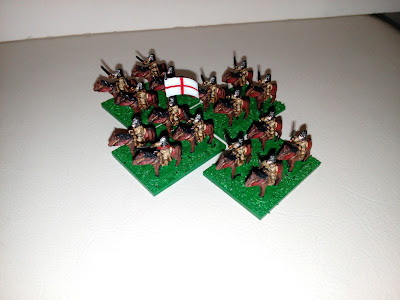 Not that I`m a painting maniac, those small scales tend to paint quicker then large models, but the GF is knocked out from last nights foodfest, and the fact she is a night shift nurse... so I`ll have the coming night all by myself as well with Gettysburg and the Dr Who special on the tele, and my brushes to keep me company.

But I get lost in chitchat... this entry is upping the scale a bit, as I went from 6mm of my previous entries to 10mm this time.  Around July I supported a Kickstarter from Lancer Miniatures, for a force of 10mm English Civil War models.  It got funded with a nice margin, and when it arrived I decided to put it to the side (like, about all my Kickstarters actually) just for this challenge.

You know, in case I would ran out of miniatures... *cough* 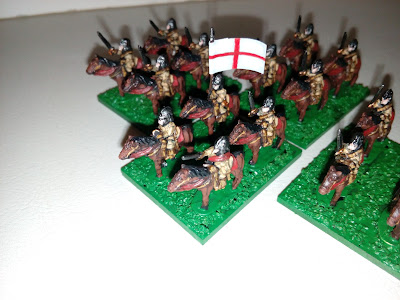 The first unit I painted as such for the army are these Dragoons, 4 to a base and 16 in total.  I am going to make the whole force for the New Model Army, yet decided on a fairly generic Parliament flag in order to not restrict the Dragoons to a specific battle or scenario. 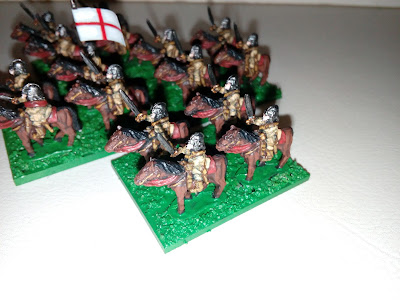 It are rather lovely little sculpts in my opinion, and they are a great joy to paint.  I`m taking the Challenge as a way to get some forces either rounded out (my epic for example), or to start and perhaps even finish other project, like these little guys.

On to the next batch of models... before the time draught hits and my turn-out will invariably suffer from it ;-)

Yes, I tell Lady Sarah that the bursting 'Lead Shed' in the yard is a contingency if I ever run out of miniatures in the house... The 'arched eyebrow held in frank disbelief' is a frequent feminine facial expression in our household...

Great work, Tom! I saw this Kickstarter when it came out and was sorely tempted. Your brushwork has kept them in good stead. I especially like their buff coats and the steel of their lobster helms. Do the upcoming pikemen have empty hands for brass/steel rod, or do they have cast-on pikes? I ask as I have a hangup about 'bendy' pikes. The old 12mm stuff from Musketeer Miniatures that I inherited have cast-on pikes which makes me crazy, having to clip them out, drill out the hands and then replace with brass. Anyway, first world problems, eh.

32 points to add to your total, Tom. Well done!