Once upon a Replication.

What do you mean it's Thursday again? Already? Seriously these weeks are going far too fast for my little old paint brush to keep up with...

Now if you remember in the previous episode I managed a whole 1 Kairic Acolyte due to planning issues. Well the good news is I've completed 4 times as many Acolytes this week; the bad news is the other 15 are sat merrily at about 65% done!

Apologies for the quality of the photos. My camera is really making everything brighter than it is, especially the bases... really must invest in a lightbox of some sort. Maybe in time for the next Challenge! 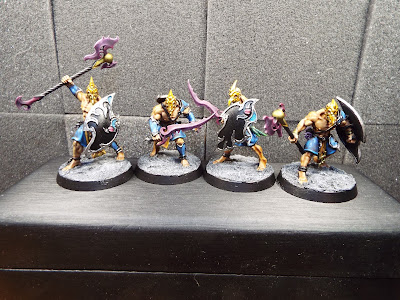 I blame work entirely. We have a major project going live at the beginning of February so I've spent the last week sat in meetings with teams from around the world planning down to the last detail. Sadly I can't take my hobby stuff in to the office but I reckon if I could I'd have had this lot done. Yes the meetings really are that exciting. 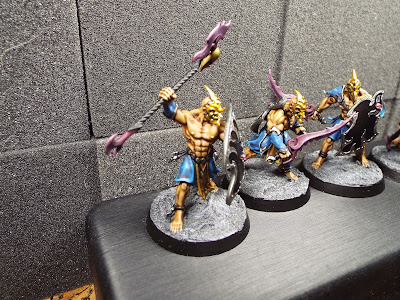 This unit might be taking me a while but I'm loving the detail on them. 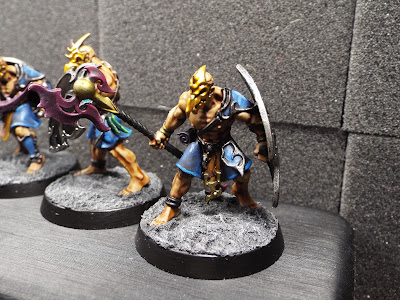 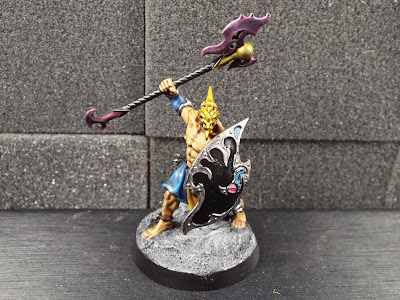 This weapon is a Glaive apparently. You can have 3 of these for every 10 Acolytes. Not sure what they do as that would entail reading the rules :-)

The "Gold" centre on the Glaive isn't gold; it's a lead metallic with a yellow wash. I didn't want to use the gold as that would detract from the facemask. 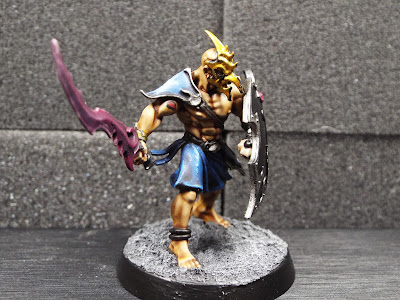 This chap appears to have a love heart tattoo! It was actually a mistake with the metallic paint on the shoulder pad as I hit his arm with the brush. Couldn't be bothered to try and redo the skin tone so opted for painting a scar... at least that's what I thought I did! 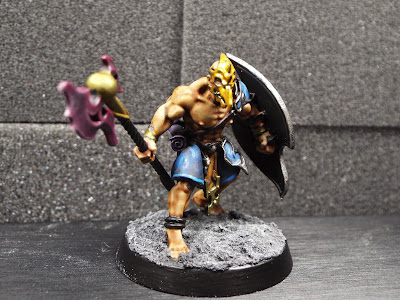 I haven't toned down the facemask as I want it to zing on the table top... 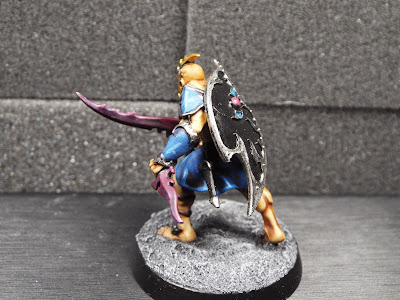 Some poses even have their shield on their back. It's a great little touch adding plenty of variety to the unit. 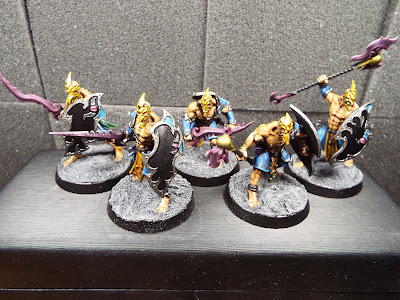 And just to prove there are now 5 completed here they are in all their Tzeentch Glory.

And then we have the BFG bonus round. I spent quite some time agonising over whether to completely redo a Khorne Skull Cannon that I'd previously started painting but had then left languishing on the shelves. In the end I decided not to as I think the existing colours work but need lots of TLC - so that'll happen after the Challenge.

However, I did completely repaint the Bloodletter Crew and this is where the replication in the opening line comes from.

Last year I painted 10 Bloodletters and had fun with their fiery swords. As I have more Bloodletters to paint I wanted to make sure I could replicate the sword effect and I reckon I've come pretty close; sadly the camera seems intent on making my yellow look far more yellow than it really is! 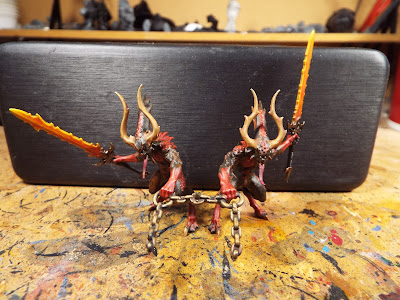 I opted to not paint the Bloodletters fully red to further distinguish these chaps as gun crew rather than infantry. 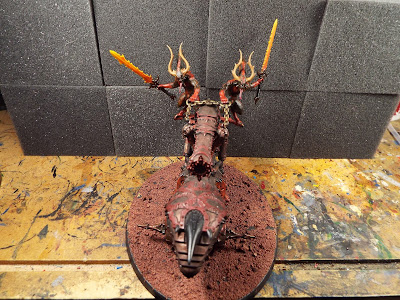 And here they are manning their Skull Cannon. 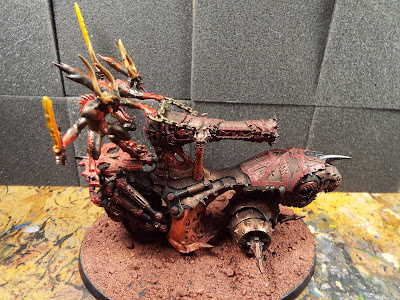 Plenty of work to do on the cannon and the base (which is my old Daemon army colour at the minute). That's a target for later this year and hopefully I'll complete it before the next Challenge!!

So an interesting week and again I've fallen short on the Kairics. Next week Rodney...

I knew that sending Nick "encouraging" messages every hour, on the hour for the ENTIRE week would get him working!

I do like the purple you've used on the swords, glaive, knives and other items primarily used for slicing open the unbelievers, suitably horrible for the nasty little chaps.  The colour combos are working as well as last week and the growing mass of numbers really brings them together.

Those Bloodletters look suitably nasty too, the two tone skin works well with the flamey swords of dooooooom that they're carrying.  30 points is absolutely right and you're smashing towards your target this year!
Posted by Unknown at 6:29 am