Scraping in my second weekly - a grab bag of DAK specialist and support vehicles I have enjoyed researching and collecting.  I am building options for force lists and these help me both in the early years in the desert as well as and expanding into Tunisia and the Operation Torch era. 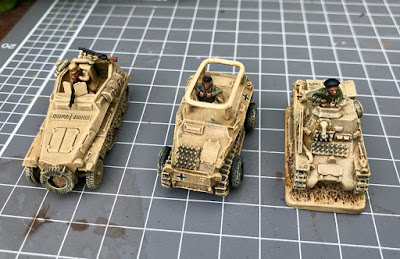 SdKfz 265 Panzerbefehlswagen - modified from a Pz I Ausf A, this was a Command Tank variant with dedicated radio transmission equipment and operator.  Here it is accompanied by a SdKfz 250 Halftrack, for use as the Luftwaffe Air Liaison Officer to control Air support (this has a tabletop control function in Battlegroup rules)

SdKfz 254 - Produced as an artillery tractor by the Austrian Army between the Wars and prior to Anschluss, it has a  unique and adjustable system of tracks and wheels. The Wehrmacht used it as a Forward Observer vehicle. Its such a cool and distinctive vehicle that I had to have one. This Battlefront model has the options to model with the wheels either engaged or retracted (I have done the latter for resilience)

SdKfz 250/10 - A classic 250 Halftrack, fitted with a 37mm AT gun and frequently utilised as the Recon Platoon Commander's vehicle. In the 41-42 period in the Desert, the 37mm gun is very useful against an array of light armour and Armoured Cars. 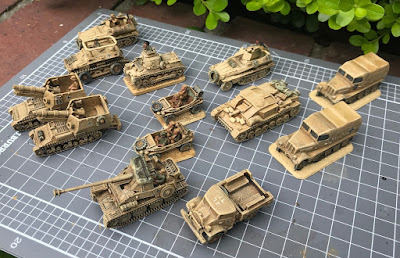 Schwimmwagens - who doesn't love the mighty Schwimmwagen? My dream car is not a Ferrari, Porsche or Audi, its a Schwimmwagen! No, the irony of fielding amphibious vehicles in the Sahara Desert is not lost on me.  I promise that if there is an oasis on the table, they will always try to schwimm across it, regardless of the tactical value of such a move. Unless I'm playing Dux of course.

Marder III (SdKfz 139) - Classic early-mid war German Tank Destroyer made by fusing a Pz39t body and mounting one of the many captured Russian 76mm AT guns.  It is accompanied here by a captured British Truck to act as its ammo hauler across the desert.

StuG III Ausf D - Who doesn't love a StuG? I needed one, though only a very small number served in Afrika, the rest being sunk in their transports en route. Due it their later arrival in theatre, I have presented it as newer and less weatherbeaten #stuglife

SdKfz 11 - Medium halftrack prime mover which saw widespread use throughout the war with over 9000 produced and its chassis was used as the basis for the SdKfz 251 Halftrack. I will be using these to move towed guns which are on the painting desk 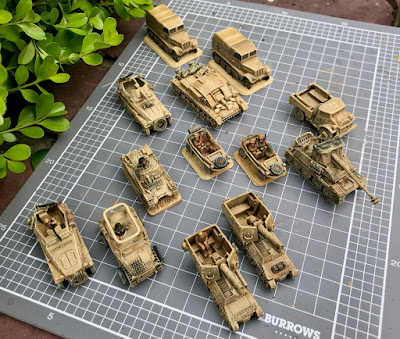 Models are predominantly a mix of Battlefront and Forged in Battle, the British Truck is a metal model by Peter Pig and the Marder and SdKfz 250s are by PSC.  In aggregation, this is 13 x 15mm vehicles and 10 crew figures.

Its also my first submission to the alternative What A Tanker challenge
15mm Tanks are real AFVs too - don't be scalist! Don't assume my scale! #notatanker


Paul, what a wonderful retrospective of German Afrika Korps vehicles. The painting is your usual excellent work - crisp yet weatherbeaten, totally believable. I also really enjoyed reading the little snippets of technical/background information you provided (i.e. I had no idea the Germans deployed the Schwimmwagens in North Africa, or that the hybrid SdKfz 254 was originally an Austrian design - very cool).