Back before Christmas I took the dive and subscribed to the 40k magazine, Conquest, as it seemed like a good way of trying to get back into 40k with regular deliveries of hobby fun. I was interested to see how the painting guides worked over time and what they felt was a good intro to the rules and background. So far, I'm actually really impressed with it as an intro system for kids. Back when I first started we had Heroquest as a gateway drug, with extra adventures in White Dwarf... About 30 years later and I'm still throwing money at GW...

Years ago I had a Red Scorpion force made up of all the Forgeworld kits, which was hellish expensive and was sold not too long after completion for various reasons of disinterest. I always liked the colours, even if they are slightly puritanical when it comes to genetics. When it came to selecting a colour scheme I reverted back to what I knew.

The figures were all finished weeks ago, but the rubber and resin to cast the bases didn't turn up until last Monday waiting for all these lovingly crafted bases to be immortalised 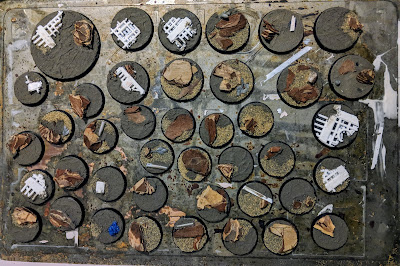 Casting these turned into a series of disasters. First half the rubber didn't set properly... then some of the resin didn't set properly (probably due to bits of non-set rubber being present?). Demoulding then destroyed half the bases as well... things were nearly thrown. In the end I got enough bases out of it so disaster was averted... but some of my favourite bases were lost :(

Aaaaaanyway, onto the show and tell!

Primaris captain in Gravis armour from the starter set. Another should be along at some point from Conquest, so I can play around with poses and equipment later. 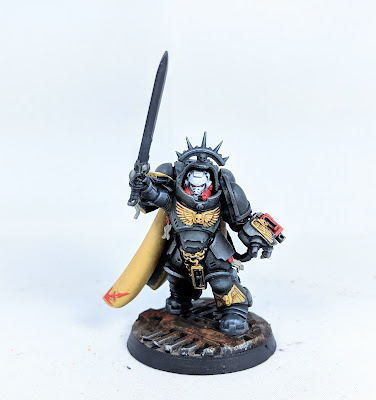 10 Primaris with Bolters of varying designs. a number of these are the easy builds that came with conquest. Issue one was 3 of these, plus a brush and 2 pots of paint for £2. It would have been rude not to buy extra copies to bulk out the force. You'll notice that throughout the force, all of the baseline infantry have their heads covered. Bare heads with power armour just seems like a dumb idea to me, so one in three of those figures are still on the sprues as their helmet is stuck on their leg. 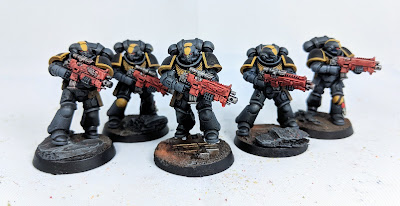 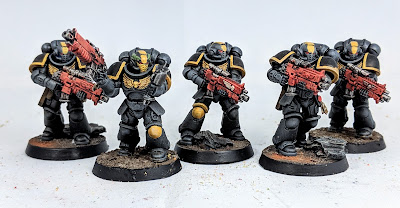 For a bit of fast attack we have 4 of the easy build Inceptors. Two more of these should turn up throughout the course of the Conquest series, eventually giving me two squads of these guys.  The OSL on these was done with some light dry brushing of the blues and was surprisingly effective. 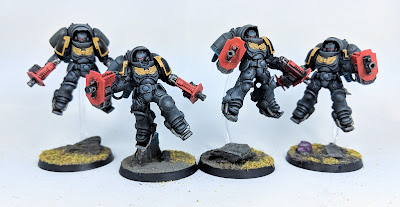 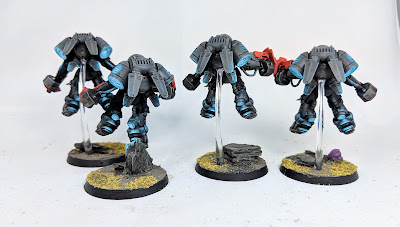 Recently the series added a squad of easy build aggressors to the army. These I really like as they still seem to be able to move in their chunky armour, unlike most of the old plastic Terminators (not counting the relatively recent Space Hulk ones)

5 Hellblasters will add a bit of punch to the force. Again, the OSL was all dry brushed on. 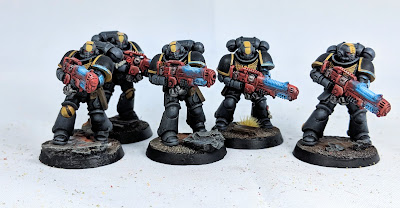 5 Reavers ready to sneak up and murderize any Chaos that turn up. These were from the Kill Team box as the ones that came with Conquest were easy-builds with pistols and knives. This will give me some extra bits and pieces to stick on the duplicate set of easybuild reavers when they turn up, stopping them all looking the same.

I know I said no bare heads, but the Lieutenant is my one exception to this as I really like the model. I know a lot of people still moan about the Primaris, but to me they look how a Space Marine should look; towering over the regular humans and able to move freely, rather than constantly in a squatting pose that makes some of them shorter than a Cadian infantryman. 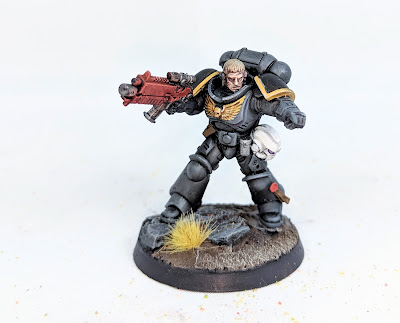 I had a Contemptor dreadnought kicking around from the Horus Heresy board games, so I decided to add him to the lineup as well. As this was the plastic Contemptor, the pose was a bit naff, so a bit of hacking later and he is now striding forward and twisting at the waist to look a little bit more dynamic than the very static pose they decided to go for. 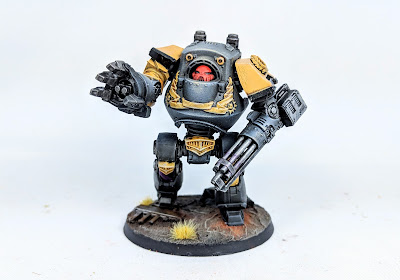 That is the end of the Space marines, so here is a crowd shot of them all together 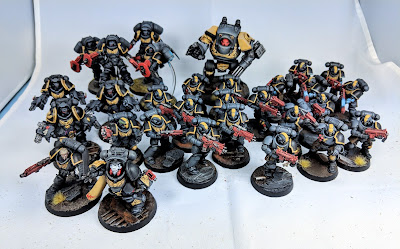 This, combined with the initial test batch that were completed before the challenge started, I've for a reasonable size force made up of things just from the starter set, Conquest, one Kill Team kit and two characters. Not bad. Not bad at all! The plan is to try and keep on top of the monthly deliveries and paint the 4 issues worth of stuff before the next batch arrives. The marines are caught up, except for the three characters who were on the painting table as the challenge started. Must finish them soon... 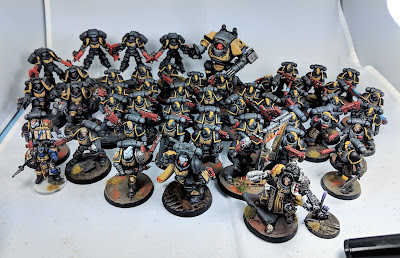 Oh, those bases I was having problems with? Messing around with the rust effect has been great fun and has taught me even more about the Modelmates stuff. If you brush it on very lightly and scrub it around a bit, you can get some really nice burnt effects, rather than rust. I need to try a wash of blue underneath this to see if it looks like scorched metal

After all that, I also managed to complete 7 doorways for Warhammer Quest that I undercoated about 3 years ago! 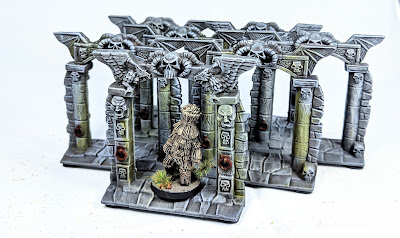 
Your Primaris marines look fabulous. I'm really taken with the dark grey and yellow livery you've come up with, especially the striping on their helmets. Personally I find the whole Primaris fluff to be ridiculous, but I do like how these Space Marine models actually resemble what a 'normal' Marine should look like next to regular humans. I wish they had just adjusted the scale and called it a day instead of cooking up this stooopid storyline (and with that hopped-up, armoured accountant, Roboute Guilliman behind it, the whole thing becomes immediately suspect). Whatever, the models are still cool.

Even though you had some hard sledding with your base project I must say they look pretty darn nice to me. I really like the weathering effects you achieved with that Modelmates stuff. Notes being jotted down...

Digging through the Challenge archives I found that we traditionally give 15 points for Dreadnoughts, so all together (with and extra point each for the infuriatingly bespoke bases) this gives you 202 points. Quite a tidy bomb there actually. Well done Paul!

Posted by Endtransmission at 1:08 am