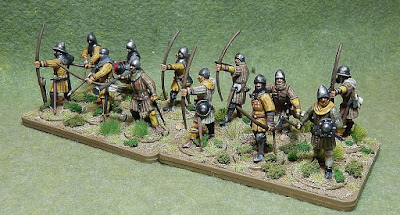 Back at work full time after the festive break so not quite so many opportunities to get the brushes out this week so only a dozen figures completed. The previous output on this Hundred Years War project for the painting challenge has all been Frenchmen, but this week my English contingent get some attention.

As mentioned on some of the earlier posts the Perry Miniatures French and English boxes are very interchangeable with the English archers being typically much less armoured than the French infantry. 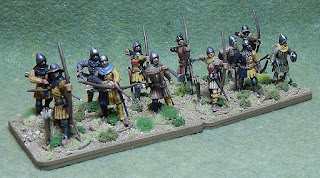 With this batch of archers I did a lot of mixing up of French bodies and heads with the archer arms and a lot more armour is included on these. Some are still made up of only the English bodies and arms but this batch should give you an idea of the possibilities with mash-ups between the sets.

The figures are painted with a black and gold theme, again, not maintaining a specific livery but a common limited palette to bind the figures into a unit but not to have them overly uniform. 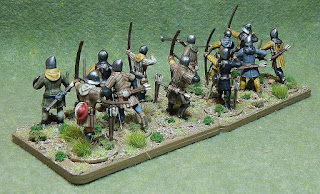 The figures are based on standard 20mm Renedra rounds and mounted in the Warbases custom trays that I ordered - I'll be needing another order of these soon..

In this group of four the second figure in is a heavily armoured French body with both a mail coif and plate armour for his legs. The third, lightly armed, figure with the dagger is entirely from the French set apart from his sheath of arrows and small shield. 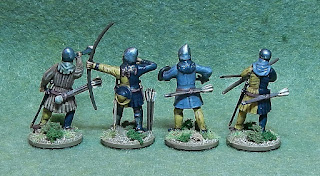 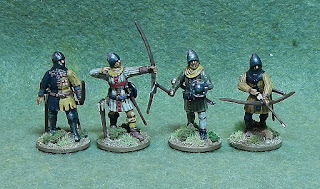 The figure on the left is another use of the heavily armoured French body while the shield on the third bowman is from the French set. The final figure is a French body and head with English arms, a good dynamic pose that is not available in the English set, he also has metal greaves. 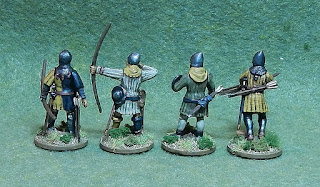 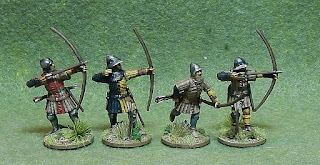 The first three members of this group are made from French heads and bodies with English bowman arms. The final figure is an English body with a French head. The option to have additional choices of bodies and helmets does get a lot of extra value out of these two sets. 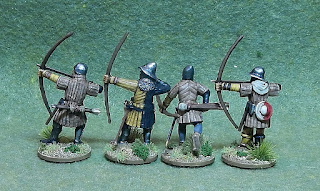 As ever with the Perry plastics they go together very well and need very little cleaning up and filler in preparation and paint up easily. I'm working on another dozen English bowmen already.

"Are you crazy? They'll never go for it. And then again they might. Those little minions . . . they love toys!"

Clearly, your mind is a raging torrent, flooded with rivulets of thought cascading into a waterfall of creative alternatives.  The cross of St. George on the livery of one archer is really the only bit to distinguish them from the French, so you've got the option of expanding the army to boot.

Give the poster 60 points!

Posted by Paul Scrivens-Smith at 2:24 pm