The Sturmgeschutz series of Assult Guns was based on the proven chassis of the Panzer III and was probably one of the most effective weapons in Germany's armoured divisions. Initially designed as assault artillery its role developed as the war progressed. After encountering Soviet T24's and KV tanks the role of tank destroyer, with it's by now upgraded and powerful forward facing gun, became more important. 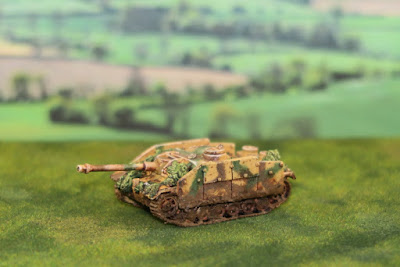 Another factor in the success and utility of the StuG's was probably not something the Nazi regime would have liked to trumpet. They were relatively cheap to build and Germany was increasingly short on resources. 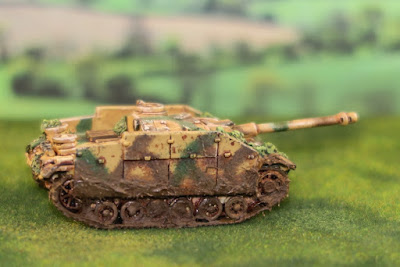 By 1944 the StuG III had been up-gunned with the 7.5 cm StuK 40 L/48 making it a much more deadly weapon. The final version of the series was the StuG II Aust G and saw service right through the Normandy campaign and beyond. Its superstructure had been widened and it was slightly taller allowing more room in the fighting compartment for the crew, and for ammunition stowage. From May 1943, side hull spaced armour plates (Schürzen) were fitted, initially to protect against Russian anti-tank rifles, but they later also proved effective against hollow-charge ammunition. 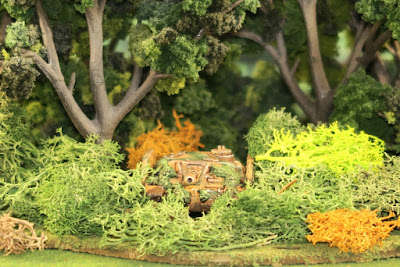 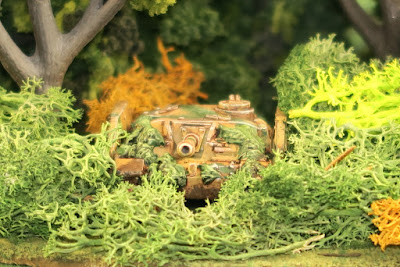 My StuG is battle hardened and covered in camouflage and mud, making it very hard to spot when placed in a good position. This model is by Peter Pig and the Schürzen are bought separately. They fit nicely on the model and I think they make the vehicle look much more intimidating. It'll need to be when it goes up against those Shermans I painted a few weeks ago.

JamieM - I've said it before and I've said it again, the StuG is quite possibly my most favouritest AFV of WW2.  There's something quite workmanlike about it that shows it's just there to do it's job and not mess around with all the silliness of some of later war tanks.  Cracking example of a veteran one here and looks ready to do plenty of damage - 8 points well earned sir.
Posted by BigLee at 2:26 am