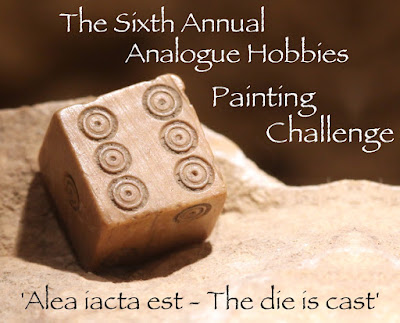 In 49 BC Julius Caesar halted his XIII legion along the north bank of the Rubicon river in northern Italy. He knew that if he crossed with his army into southern Italy he would be violating Roman law, thereby making the lives of both him and his men forfeit, but Caesar also aware that if he returned to Rome as a regular citizen he would be censored by the government and quite possibly killed. After some deliberation he resolved to cross the Rubicon and risk civil war. Once on the other side of the river Caesar is reported to have said, 'Alea iacta est' - The die is cast.

Figures can be prepared and primed prior to the start date, but no colour can be applied until December 20th. In order to be fully scored the figures have to be based and their groundwork completed. The figures have to be painted by you. The Challenge follows the honour system in the completion and entry of figures. Dishonour and public shaming goes (with perhaps the throwing of frozen vegetables) upon anyone who besmirches the venerable craft of painting toy soldiers!

The figures can be in any scale and in any theme, including pulp-adventure, science-fiction and fantasy.

In order to be scored, photos of all figures/units along with a short descriptive note must be uploaded to the Analogue Hobbies Painting Challenge blog. Up-to-date scoring will be maintained on the blog's main page. I will send out an email to all Challengers to provide further details regarding participation.

The Judge (me) will participate, but my score will not have any standing in the Challenge (I will continue my struggle to be amongst the middle-of-the-pack).

Since I can't leave well enough alone, I've again tweaked a few aspects of how the Challenge will be administered. I will still be the master of ceremonies, but I've called upon a Happy Few to assist me in keeping this joyous circus on the rails - more on that later.


Similar to previous years, I ask that each Challenger declare his/her points target that they hope to achieve by the March 20th deadline. I encourage Challengers to pick a target that is a bit beyond their comfort zone, but still achievable. Many participants have found this a great incentive to help maintain their pace over the three months of the Challenge. As a benchmark, 400 points is a manageable amount for someone who is new the the event and/or has a busy work/life schedule. Remember, many points can be secured by participating in the Bonus Rounds (more on this below).

Also, many folks have a lot of fun issuing 'duels' to other participants in order to race to meet a declared target, paint the most figures for a specific period, etc. I leave this to the participants to organize, but I'm more than happy to log the duels and keep track of the points.

Same as previous years, we will have a series of thematic Bonus Rounds. Each Bonus Round asks Challengers to enter a submission that illustrates a particular theme. The Bonus Rounds are not mandatory, they are just a little bit of fun to pace out the the Challenge and allow people to gain some points and fame through presenting vignettes and specific single figures.

Those Challengers who manage to submit an entry for a 'Fortnight Theme Bonus Round' will receive an extra 50 points on top of the regular entry tally. No scales less than 15mm will be eligible for the Theme Bonus Rounds but they can be of a historical or fictional subject.

The seven Bonus Themes along with their submission deadlines are:

The theme submissions are to be sent in by 12:01 am (CST) on the specified date (Sundays for all).

For each bonus round I'll post a poll listing all the round's entries so visitors can vote for their favourite.


As in previous Challenges, I ask for a small memento from each Challenger. In keeping with this year's theme, the entrance 'fee' for this year's Challenge will be a single 28mm figure characterized as a risk-taker, daredevil or gambler. The figure will be supplied and painted by the entrant. This miniature can be submitted any time up until the end of the Challenge. Again, same as previous years, for each figure I receive I will donate $5 to the Saskatchewan branch of the Regina Humane Society.


Please don't wait too long if you're interested - drop me a note below to get on the roster. I'll place notification in this space when all the participant slots for the Challenge have been filled.