Two contributions from me this week, for different projects underway:

No, these are NOT Chaos Warriors (though the figs are indeed the venerable 2004 GW sculpts).  You can easily tell by the way their shields have been meticulously scraped clean of the characteristic 8 pointed star icons and most of the skulls, right? Right!

These are the beginnings of my first ever Fantasy army: a  Conan-esque "Riders of Doom" / Game of Thrones Wildling inspired raider force.  These rather ominous looking chaps deliver two 6 Heavy Foot units for Dragon Rampant; one with 2 handed weapons and one with Shields (and led my a Sub-Leader with a Standard Bearer and a musical/signalling Horn blowing chap). 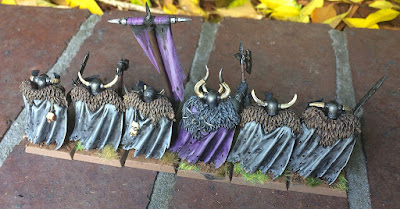 Painting wise, they were undercoated black and then I fell into the pitfall of enjoying painting all the lovely details and spending far too long on them - not good time economy from a points perspective, but I am pleased with their "just in from the wastelands" appearance. 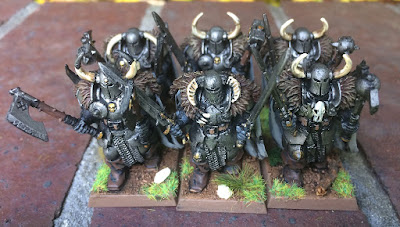 Banner and shields are of course hand painted to avoid the unpleasantness than Alan unleashes on those who utilise shield decals, which are (and I quote verbatim) "evil and the work of the Devil" (as he is fond of exclaiming loudly into perpetrators' ears...)

Another of my hobby objectives this year is to add to my 28mm Brit Para force, which I completed as part of my first challenge back in AHPC IV.  I really love this army (but JamesL's Germans generally don't) and am keen to add some some force options that I didn't do the first time around.

First up is a pair of Para Jeeps which come from the Brigade's Airborne Reconnaissance Squadron, but can also be used to tow the Para's Light Howitzers and 6pdr antitank guns.  Fitted with Lewis guns, they can be very useful for a flanking movements and to throw some suppressing fire about in rear areas and cause havoc generally.  Jeeps are by Warlord Games, crews are by Artisan Designs and I've added a bunch of other stowage and gibbons from my bits box.  LMGs are modelled in a "stowed but ready" configuration for playing/storage longevity.  Yes, one of the Paras is toting a captured MG42 - to offset the captured Brit weapons that some of Alan's new Fallschirmjäger are carrying (which will also be posted today) and because its such a cool weapon! 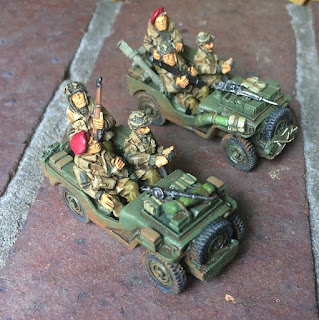 Tip for Commonwealth types (standfast Canuks): note that the Jeep is an American designed vehicle.  Thus, the driver is on the Left hand side. Don't go into automatic and superglue your drivers into your more usual right hand side driver's position.  Yes I felt sufficiently purist (or sufficiently pressured by one called Alan) to remove said drivers, fix the paintwork and then re-glue them onto the designed -as opposed to proper! - side. 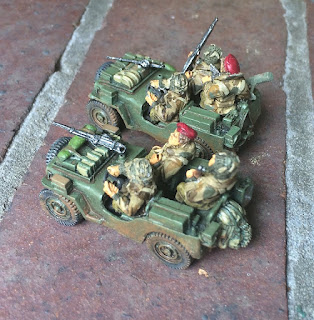 Overall, that should be 60 points for the 12 Raiders, while the Para jeeps are 2 x vehicles + 6 full crew figures for another 60 points: adding a modest but pleasing 120 points to the pot.

Wow, what a wonderful set of contrasting miniatures!

Those raider chaps are very imposing fellows. I love their dark brooding armour and the 'King in Yellow', er, Purple shield device. I had know idea that Alan was such a free-hand fascist - he would be in good company with our PeterD. Honestly, I hate working with decals, but I can't deny their usefulness, especially if you're not talented with fine detail brushwork.

That is an excellent brace of Airborne jeeps. I really like the muddy undercarriage and the various stowage. (The trooper with the MG42 is brilliant.) Historical note: These vehicles were not armed with Lewis guns, but rather Vickers K LMGs. It is a common misconception due to them both having drum magazines, but the Vickers K had a tremendous rate-of-fire (similar to the MG42) which their crews loved.

Also a small correction on your assumption about Canadian vehicles/driving: except for a few small municipalities in the early 20th century, Canadians have always had our steering on the left hand side of our vehicles and we drive on the right - like the Americans (and, well, most of the sensible world). ;)

130 points for you (including a few for your Cthonian shields and flag), Paul. Terrific work, Mate!
Posted by Paul O'G at 2:38 pm