Another mixed entry as the challenge moves into the final weeks frenzy of painting. Below are four Universal Carriers from Frontline Wargames. From left to right there are MKII with canopy, MKII with canopy, WASP and another MKII. All are 20 (1/76) scale.

On a previous entry some of the constructive feedback was that there was no weathering, so here is the first attempt at the very same. Perhaps over cautious, however felt that this was the best approach until am more confident with the weathering powders.

Only the two canopied MKII have weathering added on.

Next is the only sci-fi figures painted in this year's challenge so far, and these are from Ground Zero Games New Israeli range in 15mm which will be used in Critical Mass at some point in the future. 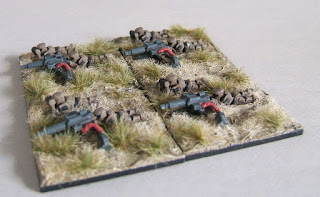 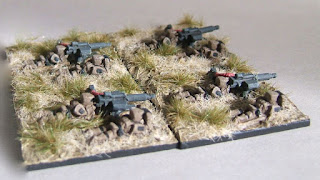 Next is the bulk of a Hordes of the Things army in 15mm from Alternative Armies. Shown here are seven stands of undead skeleton warbands, 1 stand of wraith lurkers and 1 stand of ghouls. 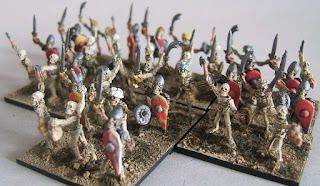 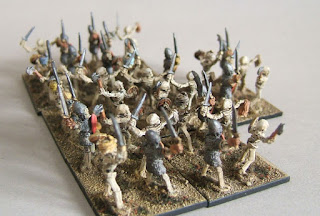 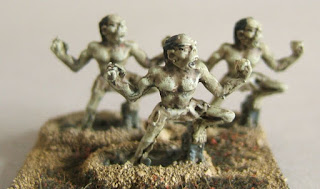 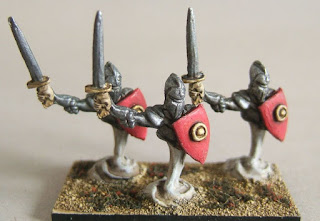 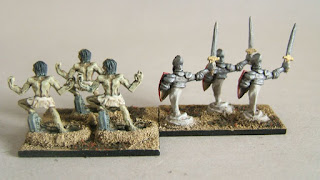 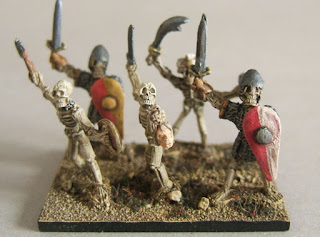 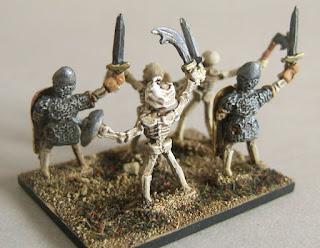 A simple colour scheme and quick and easy to paint, starting with a bone undercoat, dark wash and dry brushing in various bone colours to highlight. Deliberately picked a limited pallette for these and on the whole am quite pleased.

So to recap there are

For a total of 146 points which sees the challenge barrier passed.

Hoping to have another entry before the finish line.

ByronM: A great entry here Ross and Congrats on getting over your challenge goal!  I like that you tried something new with powders, that's a lot of what I use the challenge for myself, trying new things and trying to constantly learn and grow as a painter.  I like the effect, it helps break up the colour and you can see that most obviously in the picture that has some with and some without.  With weathering and especially with powders, you can really go at it, and they just keep looking better so don't be afraid to play with it.  Also, if you go to far, grab a wet brush and just wipe it off!  If you want to play further, they give great effects when put on wet, they make a pastel like paint, or you can use rubbing alcohol as a setting agent as well.  Lots of stuff to play with.  If you want real hints and tricks look up James Wappel's blog, that guy is a master with them and teaches you how is easy to follow videos and posts.

Anyway, again, awesome stuff here, I like all the varied figures and painting in this post, and congrats!
Posted by roma912 at 3:28 pm