My current shiny obsession continues to be WWII Jugoslavian Partisans, so much of this week has been spent converting figures. 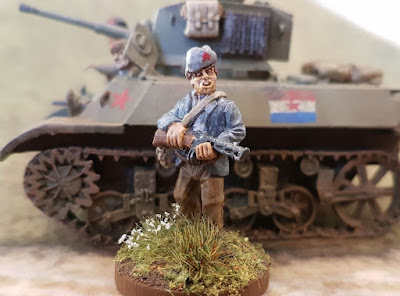 Tito's Partisans are very interesting to model, partly because their appearance varied so much. In 1941 the first partisans often wore civilian clothing or ex-Jugoslav Army uniforms, along with whatever they captured from the enemy. After the Italian capitulation in 1943, large quantities of Italian uniforms and equipment fell into partisan hands, and from mid-1944 large quantities of British battledress and equipment was being supplied by the allies. Partisans in Bosnia and Croatia often made use of captured Domobran (Croatian army) uniforms, which were themselves originally old Jugoslav Army uniforms, but increasingly supplied by Germany as the war went on. As the Red Army invaded from the east, Soviet uniforms and equipment were issued to some Partisan brigades. As the war went on, Partisan HQ also attempted to standardise uniform as much as possible, which really meant just trying to introduce uniform cap styles and rank insignia. 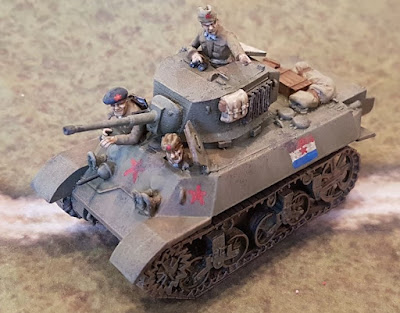 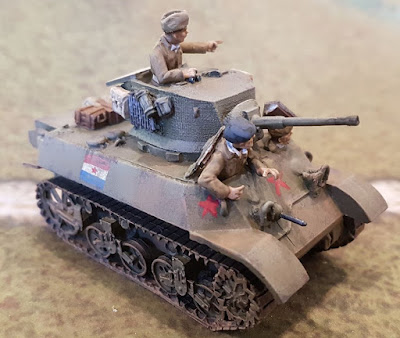 By 1945 the Partisans also fielded two tank brigades, the 1st, supplied with M3A3 Stuart tanks and AEC armoured cars by the allies, and the 2nd supplied by the Red Army with T34/85s. They also made use of a wide variety of captured vehicles that originated in France, Italy and Germany.

This week I have painted up a lovely model from Company B of an M3A3 from the 1st Tank Brigade, with converted crew in British battledress from the Warlord games plastic box set.

The infantry this week are from Black Tree Design and Warlord British, German and Russian infantry, chopped about and greenstuffed as appropriate. This little lot should give me 20 points for the tank, 40 for the infantry, and say another 8 for the tank crew?

Lovely stuff, Dux! We're all enjoying this little history lesson- what was your day job again?! I like the crew hanging out of the Stuart, it really helps give a sense of scale. The handpainted markings and floral bases are your signature. I'm glad to award a few bonus points for the conversions and markings.

Barks
Posted by Dux Homunculorum at 11:00 am