Their short barrels limited their effective range but the 75mm guns were capable of ripping the heart out of any Allied tank in the early desert war.  Mercifully for the 8th Army, they were always in short supply throughout and thus saw heavy and constant action. 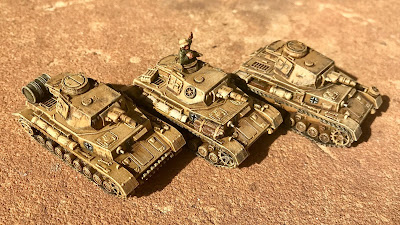 As befits their operational usage, I have painted them up as well worn desert veterans. These models are PSC plastic kits. 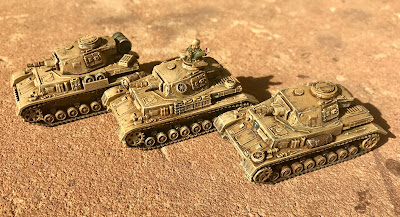 As Battlegroup Torch takes the Desert War to Tunisia I can now field the Tiger tank, which was in operational use there from Dec 42.  The thick armour and brutal 88mm gun were a lethal combination which, while far from unbeatable, established the concept of "Tiger Fear" amongst Western Allied tank crews.

As a newcomer to the theatre, I have done this Tiger as new looking and unbattered example.  This model is from the recent Battlefront release in plastic. 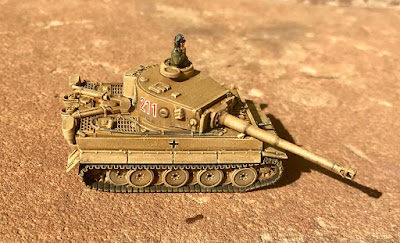 My final offering this week is a Pak 38 5cm Anti Tank gun battery.  I have also modelled additional crewing options (allowing it to stay operational after taking some personnel casualties), and with both SdKfz 10 tow tractors for mobile operations, and dug-in 'nest' positions for flexibility. 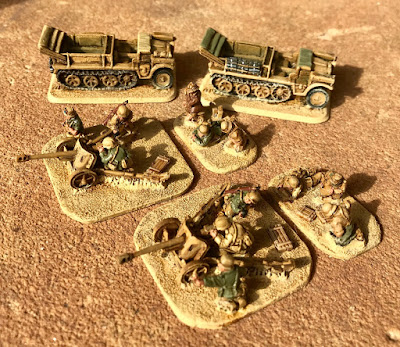 The guns, crews and tows are by Forged in Battle. The PaK nests are resin by Battlefront. 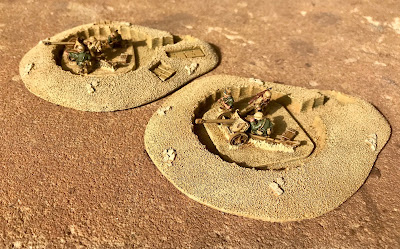 Overall, this submission contains 4 tanks, 2 halftracks, 2 guns and 14 crew figures for 84 points.
Given their size I suggest 5 points each for the two gun emplacements, for a total of 94 points.

Lovely work on the tanks and Paks Paul. That clean "new in theatre" Tiger is definitely a cat set among the pigeons!
The Pak nests should really be treated as terrain, but that would only give you a couple of points as they are quite small, so I'll treat them as crew-served weapons instead.
Posted by Paul O'G at 5:00 am