My submission this week is both a foray into a new period for me, the Hundred Years War, and my first ever submission for Sarah's Choice. 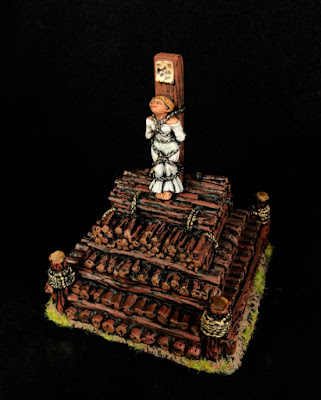 Jeanne d'Arc is an amazing historical female personality, and the ultimate glass ceiling breaker of the Medieval age.

From a humble French peasant background, Jeanne believed that she was chosen by God to free France from the Anglo-Burgundian invaders.  At 16 she persuaded a judge to nullify the arranged marriage her father had brokered for her.  At the age of 17 she petitioned and amazingly gained an audience with the Crown Prince.  Despite all advice to the contrary, he agreed to place her in Command of an Armed force to help relieve the besieged city of Orleans, which she forsaw would result in him being crowned King.  While the exact nature of her position remains unconfirmed (not well documented and the story has grown in legend through the centuries), her presence and the inferred divine inspiration definitely had an effect. The enemy was defeated and the siege lifted, though Jeanne was wounded by an arrow in the process.  The Dauphin was subsequently crowned King Charles VII in Reims, as Jeanne had promised. 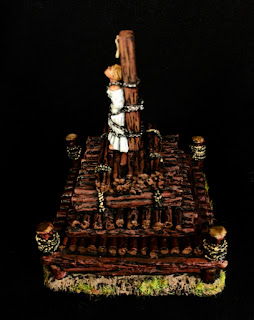 Jeanne was subsequently sent to Campiegne to attack the Allied forces there but her force was ambushed and she was captured.  The English moved her to their Headquarters in Rouen where they tried her for a range of crimes including heresy, witchcraft and dressing like a man (!) in order to discredit both her and Charles VII.  In 1421 she was found guilty of Heresy and burned at the stake in the town square, aged just 19.  A memorial and Church in her name stand there today and I had the opportunity to visit a few years back.  20 years after her death the Pope overturned the Heresy ruling and she was eventually cannonised as a Saint in 1920.  But long before that her martyrdom and reputation had been well established and she has represented French Unity and Freedom for centuries. Her annual feast is held on 30 May. 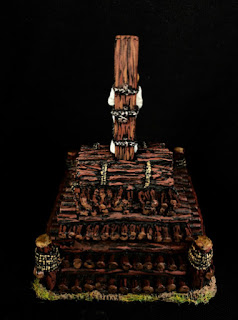 This model is a 28mm dioramic figure by Baueda Wargames and is a great tribute to this amazing Lady.  The figure herself is metal while the wood piles are two piece resin. I really enjoyed painting her and used a heavy black outlining technique so she would stand out more dramatically in her white gown.

Well that's just great - Curt is off somewhere plotting mischief, and I must now make some sort of points decision...hmmm, we have one 28mm figure for sure, but then all of that firewood...I shall declare that this equates to another six 28mm figures' worth of painting, for a total of 35 points. Hopefully no martyrdom will be required...

Great work Paul on a very interesting piece - and truly, what an amazing character from history. This was a great read for me, as I must admit I had only the haziest understanding of the story itself, so this is much appreciated.

Well done Paul! As you continue into this new period, I'm sure this piece will inspire you to keep going!