I have now moved onto to the new Brigade for the operation around Suakin. This saw the Guards Brigade enter the the campaign. So to start I have the skirmish elements on sabot bases. I am using these to give me some options as there can be a number of skirmish units in the game - so I can use 3 4 - 5 - 6 figures per base (and fill in with bush/rocks as needed) depending on the size of the overall game. I also think they have an appeal on the less regular shaped based. 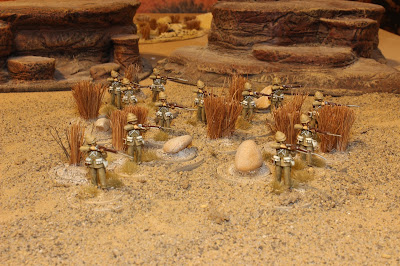 Plus a root in the lead pile recently revealed some classic "Old School" Connoisseur Naval Brigade. I intend my Naval Brigade units to be made up from a range of manufactures and dress - just to give some diverse interest. These appeal to the early  teen in me - which is when I first saw these in the flesh! 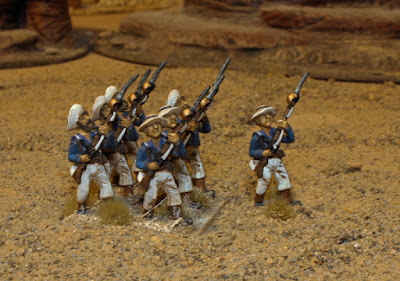 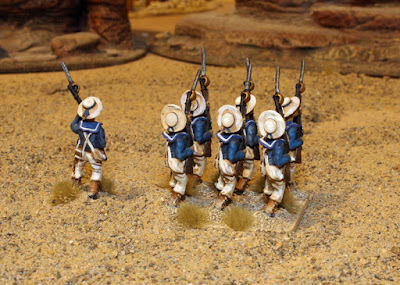 I am occasionally working on a naval gun team, with the guys pulling the Gatling gun and limber - got a good bit of conversion work to do on it to get it how I want. But for inspiration I occasionally watch this:


I worked for number of year with Petty Officer "Smudger" Smith who competed in this a number of times in is Navy Career... he always said it was "The" hardest thing ever! and to prove it he would wave at you with a missing half finger - removed by the gun carriage!


Here we are, jumping from one shell crater to another, admiring the sights of Dave's work. Fabulous stuff. It's great to see the Guards' arrival on the scene. I like the sabot bases with the rock and bush inserts - very clever. The boys from the Naval Brigade are excellent as well. I quite like their cutlass bayonets and round hats.

95 points to add to your daily tally, but wait, there's yet another on the horizon...