Well this is my first Thursday submission and these took longer than expected. Again these are for my son's British Army and he will have over twenty battalions to punish my French with. Command and Colors Napoleonic's is a great gateway drug to get someone into 6mm gaming.

From left to right we have battalions from the 88th Regiment Connaught Rangers, 42nd Blackwatch, 59th (2nd Nottinghamshire) and 62nd Wiltshire. Each battalion has 28 infantry figures and between them they have 3 officers so points wise it's no bomb at 59 points.

We set our battalions on 60x60mm bases, British I always base in line and most units have the four figures out front as a skirmish line. The dice cells are to show the remaining strength of the units, most older units are missing these.

A close up of the highlander battalion, the kilts were fun to paint! I last did kilts for a friends demo game. Have been putting these off ever since. 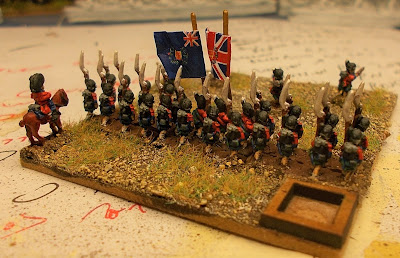 The figures and flags are from Baccus though in the case of the regimental colour I have in some cases added a little paint to help show the folds in the paper. 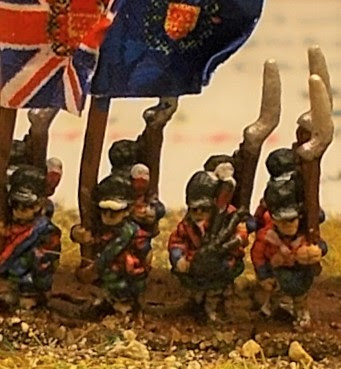 OK that's as close as you will get with these boys, the dotting of the tartan has come out quite well though I did not do the red on the hats or socks!! 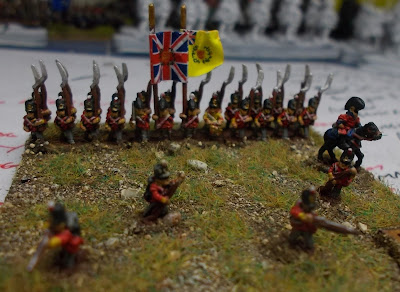 By comparison the standard British infantry are much easier to paint. I have just a few more British infantry battalions in stock but these will be the last of the challenge. I hope to get some heavy cavalry done before the end and some of my Prussians as well but next I am back to the French SYW.

MilesR: Ian - these are amazing little chaps and I'm astonished you even attempted tartans in 6mm - madness.  +2 points for the unique basing mechanism.  Superb work!
Posted by Ian at 1:00 pm