My first weekday entry, following a rush job on my paltry Recon round entry. I've actually been fairly busy since the start of the challenge, working on these models. Suffice to say painting white on large area's is a total nuisance... 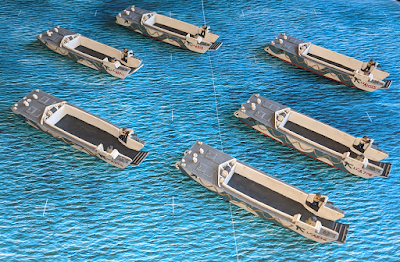 These models are 15mm Scale Battlefront Landing Craft Assault's (LCA's). The LCA was the British equivalent of the smaller American Higgins landing craft. Each could carry a full platoon of infantry (so 37 men). The Battlefront models (XBX04) are quite nice resin models, with only the front ramp and crew figures needing added. Each boat does also come with passengers, which I hope to paint later in the challenge, once I figure out how to paint Canadian uniforms.

Unfortunately, from a rivet counting perspective, these models don't quite reflect the look of the LCA, with the passenger area being too open and a second sent of armoured doors being missing from the front section. The overall shape is much more enclosed than these models are. I think battlefront made the decision to allow space for visible passengers.

If you want shivers down your spine (it certainly has that effect on me) you can check out this film, which was automatic camera footage from on board an LCA showing troops of the Canadian North Shore Regiment disembarking onto Juno beach, on 6 June 1944:

So you can see that the Battlefront models are not quite so enclosed.

In typical fashion, this madness is the result of Mr DaveD, who wanted to do D-Day for his Americans, which led me to decide to branch out and do some stuff for Juno beach. Which lead to me not only buying a horde of LCA's, but scratch building (and painting) a big brother for them mid 2018... Displayed here for showing off purposes. Crew figures for the LCT will form part of a challenge entry at some point. 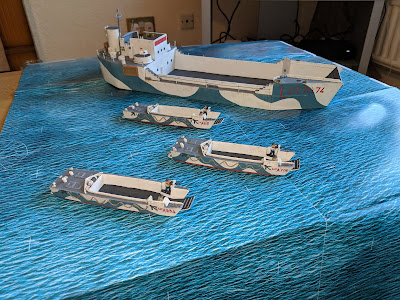 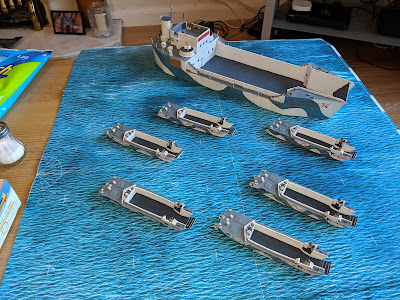 Each LCA is individually numbered (and I hate trying to freehand anything) in three places (hull siddes and rear). Numbers came from this truly fascinating source. 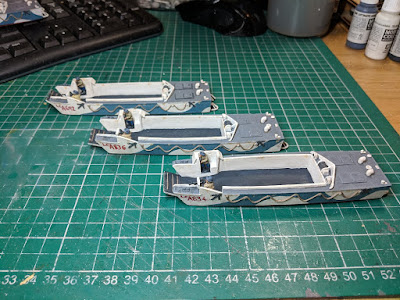 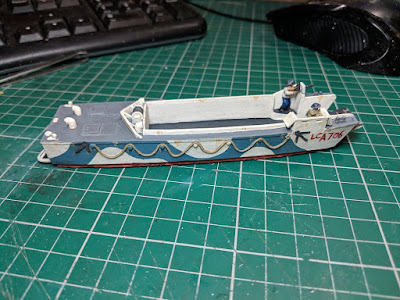 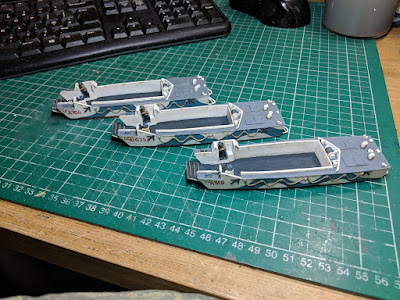 The numbers actually came from the 6 LCA's carried by the HMS (or SS) Duke of Argyll, a converted ferry that was converted into an LSI (Landing Ship Infantry) in 1942. She carried (as far as I have found) troops of 1st Battalion, Canadian Scottish Regiment, who landed on Mike Green sector of Juno beach at around H+45 (around 9am). This unit was the reserve battalion for 7th Canadian Infantry Brigade, advanced 6 miles inland on D-Day itself and took 87 casualties while taking 200 prisoners. The Scottish element (and the reference to Argyll) was a neat link to the rest of my collection. 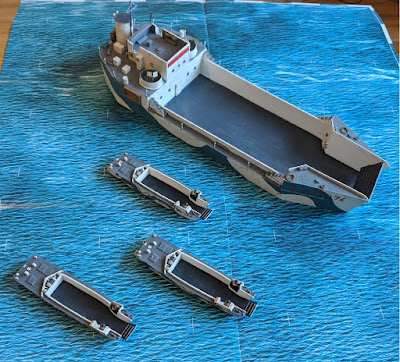 One interesting snippet from the units activity of D-Day I came across was the following:

"A German 88-mm gun camouflaged in a hay stack, began firing and destroying vehicles as they moved off the beach. Major Plows commanding officer for 'A' Company ordered Lieutenant Bernie Clarke's platoon to take out the dangerous gun emplacement. Clarke's classic reply was "Who? Me?", and he immediately set out to clear up the spot. They crawled up a knoll to within 75 yards of the position, nabbed several Germans, and then raced in. It turned out to be a gun emplacement encased in concrete with hay piled on its roof for camouflage. A door leading into the emplacement was pulled open and someone threw in a grenade. That did the trick. So quick and sudden was the Canadian action that about fifty German soldiers came out of their slit trenches - all surrendering. It was at this point that 'A' Company's second in command, Captain William H.V. Matthews came running up, asking Clarke, "What the hell are you trying to do, win the VC?""


Challenge wise, each LCA consists of one (large) 15mm vehicle and two crew figures, who were individually painted and glued in place. I'll leave Lee to judge on the points for the LCA's, but I'd respectfully point out a smaller 1/300's transport ship was recently counted as a 28mm vehicle, and the LCA's are a bit bigger than the Sherman I included!

I've long had a fascination for those turning points in war when the outcome of a battle could completely change history. D-Day was one of those moments where if it had failed who knows what the outcome would have been. But for all the technology, planning and secrecy, in the end it came down to some very very brave individuals standing in the hold of an LCA, with seawater and vomit sloshing over their boots as they waited to hit the beach and run into a hail of bullets. I've met some of the veterans that landed on D-Day and it still amazes me that any man (no matter how well trained) could do this. But do it they did, they prevailed, and history changed direction.

As for scoring I'm going to court controversy a little. These are double the size of a regular 15mm vehicle such as the tank you showed in your pictures so I'm going to score them as 15mm vehicles but award an extra 8 points each to take into account their size and for the fact you've hand painted numbers rather than using decals. With the 12 crew that brings this entry up to 120 Points.
Posted by James MacCraggs at 1:30 pm