Shaping up to be a quiet Thursday at the moment but as the man said "anything can happen in the next twenty four hours!"

I was struck by James M's ships gun crew the other day and was reminded of a story my dad told me of his time on Landing Ship Tanks in the Mediterranean during WWII.
I think it was around the time of the Anzio landing and the ship was in the open sea, there were other British ships around and in the distance aircraft that might have been enemy planes but were too far away to possibly be a threat .The captain let the front doors of the ship( the LST is the ancestor of the roll on roll off ferry and was designed to be ocean going but be flat bottomed to enable it to drive up a beach and allow tanks to unload) and let everyone have a swim,while they were in the sea there was an explosion on the nearby British capital ship, everyone piled back onboard to man the guns,every one naked except for their tin hats!( Perhaps a project for Ray?) It was the first use of remote control bombs,drones I guess? 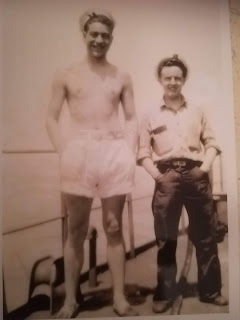 That's my dad on the right, frankly they look like different scales! Uniform was also somewhat relaxed on these small ships, unlike the aircraft carriers he served on after his commission.
Anyway I hope you will excuse this little interlude and stand ready for undead, Austrians,Celts,Men at Arms and more!
All the best Iain