Today's post is a smaller one than I had originally planned.  I have been working away on the unit of Billmen for my army, but I finally gave up at around midnight on Wednesday, and they are still not based.  If I get them finished quickly enough to count as "Thursday", then I might make a second submission.  As it is, I have also been treating myself, and have painted up my first cannon, to give me something different to work on.  And by different, I mean, painted in exactly the same colour scheme as the Billmen that I have been working on.  Crew served weapon with 4 crew, ready for scoring (and I don't know if I get points for Cannon plus 4 crew, or just points for crew served weapon for the whole lot.....) 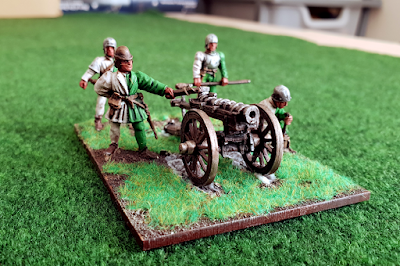 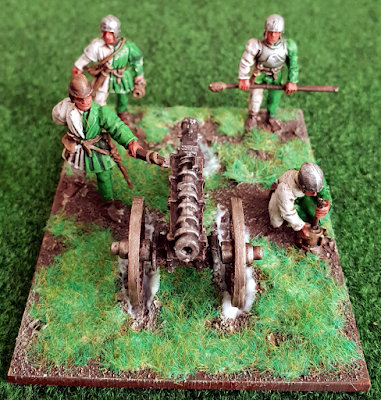 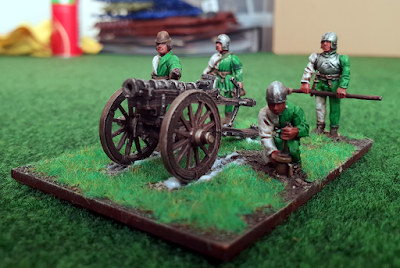 The white stuff around the wheels is some still drying Vallejo water effects, hoping to make the grooves and pit that the cannon recoil has caused look as if they are collecting water.  When it dries, we shall see.

Finally, Iain had asked for a shot of the whole army so far, so I had to oblige.  The big gap in the middle should be for the next unit of Billmen, which might get finished in time for another submission today, but I make no promises.

Well that's a solid army rapidly built! Contrasting blocks of red and green,you could do with some banners to fly over your force, doesn't Henry VII's banner come with the Perry plastic set? If not there is a fair bit on the web for free in this period.
Nice work on your wrought iron artillery piece,it's quite nice to put together don't you think?
Thanks once again for the army shot, so for 4x28mm figures we get 20 points and for a 28mm crew served artillery piece we get 10points , giving us a grand total of 30points!

All the best Iain
Posted by DrDave at 9:06 am